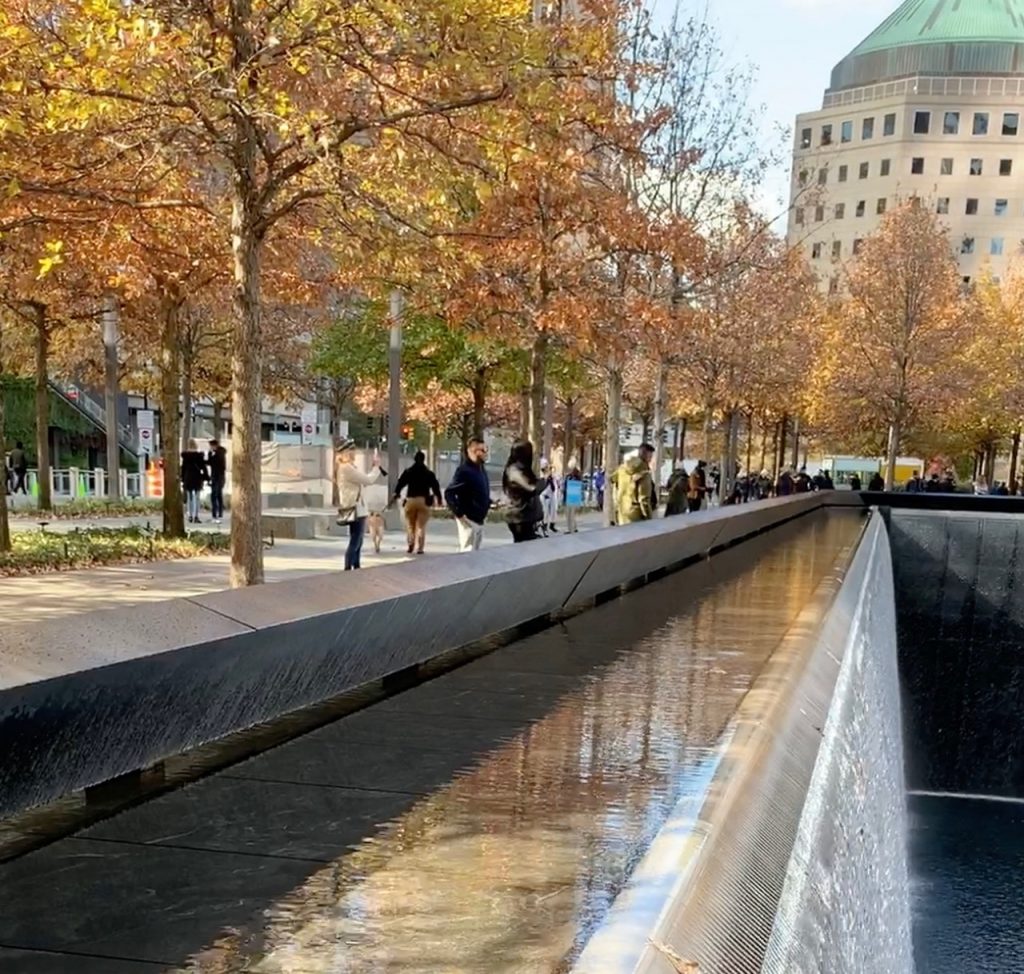 Over 400 swamp white oaks are located in the 9/11 Memorial. Photo: Christine Menapace

Today marks the day when, 19 years ago, 2,977 people perished in four coordinated terrorist attacks. Now the 9/11 Memorial, located where the World Trade Center Towers once stood, uses the language of landscape and the healing power of nature to honor those victims lost so tragically. Designed by architect Michael Arad and landscape architect Peter Walker of PWP Landscape Architecture, the Memorial includes a dense forest of 416 swamp white oak trees that creates a sacred space for contemplation and remembrance. The Memorial grove resembles a “natural” forest, yet the trees also align to form arching corridors, recalling the arches that architect Minoru Yamasaki placed at the bottom of the original towers. 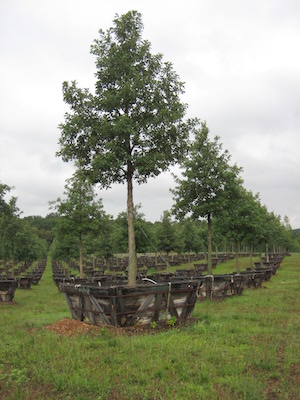 The oaks at their holding site before installation. Photo Credit: Bartlett

Before installing on site, the trees were cared for at a holding yard in Millstone Township, NJ leased from Halka Nurseries, where they adjusted to the local climate for three years. (Trees were sourced from six different nurseries in states where the attacks took place.) It was during this time, in 2006, that Bartlett Tree Experts entered the picture, meticulously pruning, irrigating, and fertilizing the trees to maintain optimal tree health and generate consistent canopies in form and height. In fact, a Bartlett technician was at the field tending the trees nearly every day for nine months of the year, and once a week in deep winter. The first 16 trees were planted at the Memorial in late August of 2010, making this year the 10th anniversary of their installation.

Since installation, Bartlett has provided the same ongoing care for the oak trees as they did in the holding yard. It includes preventatively treating for pests and diseases, monitoring soil quality, fertilizing, pruning, and more, says Wayne Dubin, who has been involved with the Memorial trees from the beginning and serves as a VP and Division Manager with Bartlett.

Have there been any pest or disease issues with the oaks? According to Dubin, spider mites are an issue on trees in the vicinity, so they carefully monitor for those as well as reaching out to neighboring property owners. Since swamp white oaks are susceptible to anthracnose, the trees are also monitored for that foliar disease. “A handful were having some difficulty,” reports Dubin, but says overall health is great.

Overall, the 415 trees have a team of Bartlett arborists that care for them, and each tree has its own record of care and observation. Charles King and Jeremy DeSimone are two of the main caretakers. With the trees located in a busy plaza, Dubin says DeSimone “works almost exclusively overnight… He’s become somewhat nocturnal.”

With a lifespan of 60 to 80 years, the swamp white oaks should be around for quite some time. “There’s every reason to believe they’re going to live a long, long time,” comments Dubin. 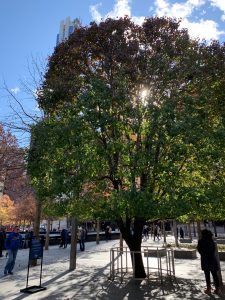 Distinct from the forest of oaks is a unique and meaningful tree that is also being cared for under the watchful eye of Bartlett. Dubbed “The Survivor Tree,” it’s a Callery pear that was nearly dead after the World Trade Center attacks. With charred bark and many limbs reduced to stumps, it was removed from the site and nursed back to health by the NYC Parks Department while the 9/11 memorial was built. Now replanted at the Memorial, it stands as a “living symbol of resilience.”

But as anyone familiar with Callery—or its cultivar Bradford—can attest, these trees often have weak wood and branch structures that are susceptible to storm damage. When asked if this tree requires more care than the oaks, Dubin emphatically replies, “It does.” He explains, “Because we don’t want to leave it vulnerable to breakage, we’re constantly maintaining the size… not letting branches overextend. We treat it differently from other Bradford pears and prune it three or four times a year.” Support cables are also used for extra reinforcement and an eye is kept out for pear trellis rust. “We monitor like crazy,” says Dubin.

The Survivor Tree is doing very well, but with a species lifespan of 15 to 25 years, I can’t help but ask if there’s a long-term replacement plan. Dubin said he’s actually never been asked. “We’re carrying on blissfully, but still know that no tree lives forever. We’ll take every measure we can to preserve and prolong its life,” he comments. 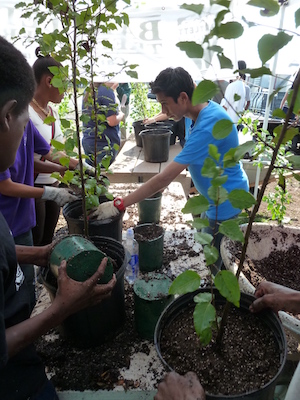 A logical option may be found one day in the Seedling program. During the Survivor tree’s rehabilitation, scientists at Bartlett collected seeds and propagated 450 descendants. Now, each year, the 9/11 Memorial gives seedlings (collected annually) from the Survivor Tree to communities that have endured tragedy in recent years. The Survivor Tree Seedling Program was launched on September 11, 2013 in partnership with Bartlett and John Bowne High School in the Flushing neighborhood of Queens. Last year’s recipients included Las Vegas, NV, (where a gunman killed 58 people at am 2017 Harvest Festival) and Pittsburgh, PA (where 11 people were shot and killed at a synagogue.)

“It’s an honor to be part of this,” Dubin says of the Memorial tree care. “It definitely stands alone as the most meaningful project in my time at Bartlett.”

Look for an upcoming article on tree fertilization from Bartlett in the Fall print edition of Turf magazine.