Building Trust Between Contractors and Architects

For many landscape construction contractors, working with landscape architects is a regular part of doing business. And even firms that offer in-house design services are likely to end up, at some point or another, involved with a project that’s been planned by a landscape architect. Understanding the dynamics of the contractor-architect relationship is essential for any installation to be successful – and it’s just good business, say a couple of experienced landscape construction pros.

Doug Wasson, owner of Plowboy Landscapes in Ventura, California, says he gets most of his work through landscape architects. “If you’re dealing with general contractors and developers, they have one or two projects a year to work on. Landscape architects might have 20 or 30 or 40 jobs to turn you on to,” he explains. “They can really provide a lot of work for you.” 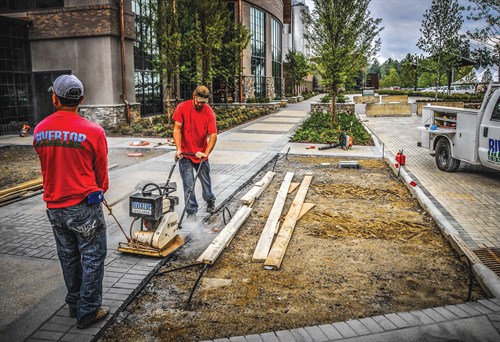 At Rivertop Contracting in Swannanoa, North Carolina, owner Rob Atema also works only with outside landscape architects and has worked hard to develop strategic partnerships with a handful of professionals in the area. Some of them specialize in residential work, some specialize in erosion control projects, others do mainly industrial parks and those types of jobs.

Atema advises landscape construction contractors to understand the different specialties of landscape architects and make efforts to form relationships with those who do similar types of projects. Or, in the case of Rivertop, to cast a wide net to help ensure a diverse mix of potential work. 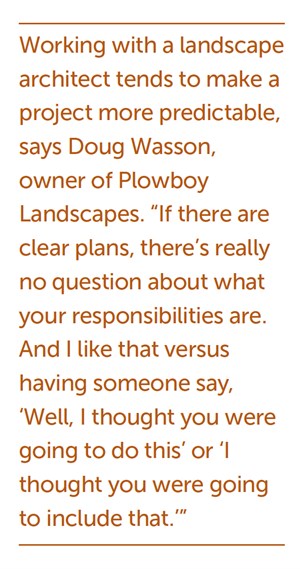 Tight plans drafted by a landscape architect minimize the possibility of there being confusion or unhappy parties, he states. Taking on a job without such plans “can lead to a lot of friction — that’s where people get into fights. I don’t want any ambiguity about anything; I want it completely clear,” Wasson says.

Both Atema and Wasson emphasize that one of the biggest considerations when working with a landscape architect is respect. “If there’s an issue – say, for example, something they drew just doesn’t work on the ground — there needs to be respect between the architect and the contractor,” says Atema. “You don’t throw them under the bus to the property owner. You work it out between the two of you and respect that relationship.”

Being respectful doesn’t mean being completely deferential. “One of the things we’ve struggled with in the past is that a lot of architects don’t necessarily have construction experience. Some things just can’t be done — it’s that simple,” says Atema. In cases where what works on paper doesn’t work on the ground, you have to be able to communicate that to the architect respectfully, he says. In most cases, he’s found architects to be receptive to the input. “After all, they want things to work, too,” he points out.

A good working (and business) relationship with a landscape architect doesn’t just happen — it takes work. “Talk to architects and get to know them before a job becomes available. Build those relationships outside of a particular project,” Atema advises. “Go and interview them and let them know what services you offer and what sets you apart from other construction contractors in your market. Then, when a job comes up they’ll feel comfortable having you build it because they know you. The relationship building can start as simply as taking an architect to lunch. Everybody has to eat.”

When a solicitation for a bid comes from an architect who Atema doesn’t have an existing relationship with, he does his due diligence to find out if the project will be a good fit. “We try to avoid jobs that require low-ball bids. A lot of inquiries that come out of the blue from people we don’t know are just that — they’re just fishing for who can do the cheapest work,” he states. Atema’s approach when he’s contacted by an unfamiliar landscape architect is to take the time to meet with them, and have a conversation about the project and “find out what they want to do, how they want to do it and what they’re up against — only then can we make a decision about whether we want to pursue the job.”

And architect-contractor partnerships work the other way, as well, emphasizes Atema. For example, sometimes a client comes directly to Rivertop Contracting. In those cases, he says, “we match up that client with an architect based on personalities and the scope of the project — it’s not a one-size-fits-all approach. It’s a two-way street, for sure.”

Wasson says he has built relationships with many landscape architects in his area, but there are still times when an architect from another part of the state or country is selected by the property owner. It’s especially important to make sure there’s good communication in these cases. “Once you get the job, have a pre-construction conference with the architect and the owner on the site, and make sure that everyone is on the same page,” he explains. “And all architects should have an outline of times when inspections should be made.”

Sometimes the architect’s contract with the property owner doesn’t include this kind of site work; in these cases, Wasson communicates with the owner about the value of getting the architect on site. “Plants, for example, need to be placed in the field, and I want the landscape architect to do it; I want approvals on all of that. A good architect will do nothing but help the job, and then the responsibility for how the final product looks is theirs.”

It’s important for contractors to understand the mindsets of landscape architects. “They tend to be very detail-oriented, which is a good thing,” says Atema. “But one of the things that can foul up a contractor is an architect who nit-picks every single little detail. For example, maybe they designed a boulder out-cropping and they wanted an 850-pound boulder. Well, boulders aren’t man-made, so finding an 850-pound boulder could be hard – it might end up being a little bit bigger or smaller than that.”

That’s why it’s equally important for architects to understand the realities of construction. “Having a little pliability goes a long way,” he suggests to architects. “It’s important that they understand they can slow down the process, and time is money.”

Wasson has found most landscape architects to be receptive to his input as an experienced installer, and that it’s possible to talk most problems through. For example, if he feels a particular plant selection won’t do well because it’s going to get too much sun, or that a specified product isn’t the right choice because he’s seen it fail frequently in the past, “I’ll talk to the architect; if they trust you, they’ll probably say, ‘Oh, I didn’t know that,’ and you can work it out.”

A good landscape architect can be a valuable resource, says Wasson. “I like being able to go to someone and say, ‘We ran into this problem; how are we going to resolve it?’ Normally they’re pretty reasonable about how to resolve those problems,” he states.

What does a landscape architect need from a contractor in return? “They need a quality job,” says Atema, boiling the issue down to its essence. “If they’re doing a job they had before we got involved and they bring us on board, they have to know we’re going to create a product that’s 110 percent of what they wanted it to be.”