Just out of high school, Chris Elmore set his eyes on becoming an engineer and he spent the next three years as a student at Old Dominion University in Norfolk, Va. That’s where he met his wife, Laura. He soon realized that to support a wife and the start of a family he had to get a full-time job. That led him to becoming an HVAC field service technician at a company where his father also worked.

About three years later in October 1995, sensing his opportunities were limited in that particular company, he responded to a “Hiring Technicians” sticker on the back of an AireServ service vehicle, and soon joined that company serving the Hampton Roads region. The company consisted of a husband and his wife operating the business out of their house, and one other HVAC service technician. That small firm was part of The Dwyer Group, headquartered in Waco, Texas, which just three years previously had started its AireServ franchising subsidiary.

That job eventually led to him joining yet another AireServ franchise location, and being named its service manager with employee training responsibilities. During his time with that company he got to know Doyle James, at the time an AireServ franchise system manager. When that company was sold, the new owner dropped its affiliation with The Dwyer Group. About a year later, Elmore decided to seek other employment.

“I knew that I was not liking the direction the company was going,” says Elmore, adding that he particularly missed the systems and the support that The Dwyer Group, and in particular James who he liked and admired, had been providing the company. That relationship resulted in Elmore being invited to the Dwyer Group headquarters in Waco, Texas, and being named an AireServ franchise consultant in 2000. Although he left AireServ to work with his grandfather for about a year, he returned to AireServ in 2004 as its vice president of operations. That led to him moving to The Grounds Guys as vice president of operations in March 2012, and this past Jan. 1 succeeding Ron Madera as its president.

“My focus, and the focus of The Grounds Guys, is to help landscapers to become better businesspeople,” says Elmore. This includes providing franchise owners the training, the business management tools and support that allows them to transition from merely providing themselves “a living and a job” to building companies that increase in value from season to season, he explains.

“A lot of landscapers eventually come to realize that they can only grow their businesses to the limits of their physical ability to control them. Their companies will grow fast the first couple of years, then their companies will be up and down, up and down,” he says. Eventually these owners get to the point where they feel they need to hire a manager to take some of the load off of themselves. Often this doesn’t work out, and the owners go back to trying to do everything again. Elmore says that by providing coaching, support and tested business systems, he and The Grounds Guys can help landscapers take their companies to higher levels of profitability and success. Key to this is helping them to develop a better understanding of their financials, including budgeting, estimating, job costing, financial tracking and benchmarking, continues Elmore.

Up Close and Personal

Just after the start of 2014, Chris Elmore graciously agreed to a telephone interview right after assuming his duties as president of The Grounds Guys. Even though he was just launching into his new position and he had a full slate of responsibilities to start working on, our discussion got off to a surprising start.

Our interview began quite unexpectedly by the two of us sharing our favorite authors of historical fiction – his being Bernard Cornwell, a 69-year-old English author best known for his novels chronicling the exploits of rifleman Richard Sharpe during Napoleonic Wars. For my part, I offered up another Brit, the late Patrick O’Brien, who wrote about the Napoleonic Wars from a naval perspective in his 20-book Aubrey-Maturin series. Both series stressed how their main protagonists often overcome incredible odds to succeed.

What a fun and friendly way to become acquainted with Elmore, who himself “rose up through the ranks” to now lead one of the fastest-growing landscape organizations in North America. A native Tidewater Virginian, Elmore now finds himself working out of the 200-employee campus of The Dwyer Group on the Brazos River, in Waco, Texas. That is when he isn’t traveling and helping the company’s growing number of landscape franchisees.

Elmore brings both hands-on, in-the-field experience (he started as an HVAC technician) and a strong business background to the position, having served first as a trainer, then in progressively more demanding management positions within Aire Serv, another of The Dwyer Groups subsidiaries. In 2012, Ron Madera, then president of The Grounds Guys, chose Elmore to serve as vice president of The Grounds Guys. Elmore became president of the landscape group upon the retirement of Ron Madera on Dec. 31, 2013.

A lifelong reader and learner, Elmore also lists Scottish crime writer Ian Rankin’s Inspector Rebus series among his favorite reads. That is when he isn’t rereading “The E-Myth: Why Most Small Businesses Don’t Work and What to Do About it,” and the “The E-Myth Revisited,” both by Michael E. Gerber; “Care Leadership,” by Peter van Stralen; and “Live R.I.C.H.,” by Dina Dwyer-Owens, chairwoman and CEO of The Dwyer Group. R.I.C.H. stands for the company’s code of values: 1. Respect, 2. Integrity, 3. Customer focus and 4. Having fun in the process.

In his personal time, Elmore enjoys reading, hunting and stepping away from the computer and paperwork by working out in a CrossFit strength and conditioning program.

Originally from coastal Virginia, Elmore says that he and his family – wife Laura and a daughter in high school and a son attending Baylor University – have adjusted well to living in and are enjoying life in central Texas.

“Some landscape company owners may be able to build successful companies without a plan, but it’s usually accidental,” he adds. “We provide a plan with sound business principles to be successful. We have a lot of great new things to share coming down the road in terms of software and systems.”

Elmore acknowledges that he has big shoes to fill in succeeding former president Ron Madera who retired at year’s end. Under Madera’s leadership The Grounds Guys grew to 136 companies since 2010.

“We’ll continue to grow at a strong rate for the next two or three years,” says Elmore. “Then I expect we’ll enter a period of moderate growth, although I suppose, some people might consider it to be pretty strong even then.”

Next post Make Turf Nutrients Work As Hard As You Do 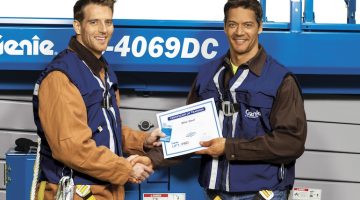