Having everyone involved from the get-go helps eliminate changes later in the process. 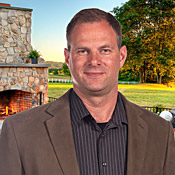 Although it hasn’t always been a popular policy, Jarod Hynson, owner of Earth, Turf & Wood in Denver, Pennsylvania, is adamant that all decision makers in the household are present at any important landscape design meetings, especially the initial appointment. It’s a lesson he’s learned the hard way by being set back to square one when a decision maker (who wasn’t present at the initial design meetings) wants changes later. Hynson admits he’s gotten pushback on the policy, but says it’s something he stands behind.

“If we can’t have both decision makers in the household present at the time of a meeting, we won’t meet,” Hynson says. “Clients don’t always like that but history has shown that unless everyone is present in the meeting, there’s no way to be sure we’re on the same page.”

Hynson says that putting together a landscape design without all the decision makers present can waste time — not only on the company’s end, but also for the client.

“When you create a landscape design with only one decision maker’s input, it’s almost guaranteed that the other individual in the household will have changes — and that puts us back to square one,” Hynson says. “Because of that, we do require that all decision makers be present.”

This isn’t always easy for clients to grapple with and Hynson says that some clients have been insulted by the policy — insisting that they were the primary decision maker and didn’t require anyone else at the meeting. In fact, Hynson says he can recall one instance where his “all decision makers present” policy lost him a job. One of the two decision makers of the household insisted she could move forward in seeing the design on her own. Hynson stuck to his guns about waiting for the other decision maker to be present and it lost him the job.

“We were in a lose/lose situation,” he recalls. “If we had presented, misinterpreted information would have been relayed to the other decision maker, making them feel like we didn’t listen to their requests. But if we didn’t present, it would make that one decision maker mad.”

Despite this one lose/lose situation that sticks out, Hynson says that it’s still a policy he firmly believes in — for everyone’s sake. After all, there are benefits for the client, too. If the project makes it as far as construction, and one of the decision makers was never consulted, they could end up being stuck with something they don’t like or having to pay more for changes down the road. It’s a problem that easily could have been sorted out had all parties been present from the start. That’s why Hynson insists on it. It’s as much for clients as it is for the company.

At the end of the day, most clients do understand where he’s coming from.

“I can use myself as an example,” Hynson says. “If I were to make a $10,000 decision about investing in a new AC unit for my home and didn’t consult my wife, she would not be very happy. I think most people ultimately understand that. And this is a lot more than an AC unit. We’re talking about a landscape design that could completely alter the look of your backyard. It’s important that everyone weighs in.”