Building Westcoast Landscape and Lawn into one of Florida's top companies.

A young person with a lawn mower and a pickup truck — how many successful landscape companies begin this way? The short answer: many. Opportunity: that’s what the landscape/lawn service industry offers would-be entrepreneurs. At least this is the case for the relatively few individuals who approach the industry with a willingness to work hard, but, more importantly, persevere, become business smart and provide service that makes clients smile. These small business owners invariably possess a gritty determination to succeed despite the challenges.

Also, in almost all cases, they seek a mentor or use the example of other successful individuals to show them the way and stoke their belief that they can achieve their dreams. Joseph “Joe” Ronnlof and John Harbord, who founded Westcoast Landscape and Lawns almost 20 years ago, are such examples. Their company is now one of the most dynamic privately owned landscape operations on Florida’s Gulf Coast.

The brothers-in-law in their startup phase almost two decades ago looked (with admiration and envy as well) to the region’s dominant companies, such as Nanaks and RayMow. Raymow is a company owned and operated by Ray Bradley, who started mowing lawns in his Tampa neighborhood at the age of 15.

Barely 40 years old in 2010, Bradley sold RayMow Enterprises, which he had built to revenue of $12 million, to ValleyCrest Landscape Maintenance.

“People called him RayMow, and he started out, just like us, mowing lawns in his neighborhood. That’s pretty cool. That’s the American dream,” says Ronnlof admiringly, recalling the afternoon in 1998 that he and Harbord decided to strike out on their own.

“John and I were working with other landscape companies. We were sitting on my family’s front porch when we decided to go into business together,” Ronnlof recalls. “The only issue: we had no money. That’s when we asked my father, Richard Ronnlof, to borrow his Lawn Boy and my uncle, John Ronnlof, to borrow his trailer. They obliged. Richard also co-signed for our first truck, a used Chevy. When we look back now, we realize it was so much more, and we just smile.”

Ronnlof admits it was “very difficult” getting a start in the industry since he and his brother-in-law lacked references. “We knocked on residential home doors all day long, eventually building a small route that almost paid the bills. We worked hard all week long, but we had a distinct vision that grew in us both,” he continues. That was the example set by RayMow to move into commercial and multi-family maintenance.

It wasn’t an easy transition.

The brothers-in-law spent countless hours cold calling potential clients and building a business-to-business marketing presence before bidding and winning a palm tree-pruning job for a mobile home park in St. Petersburg. The property manager there, delighted in the quality of their service, then awarded them the maintenance contract. It was the break they needed. 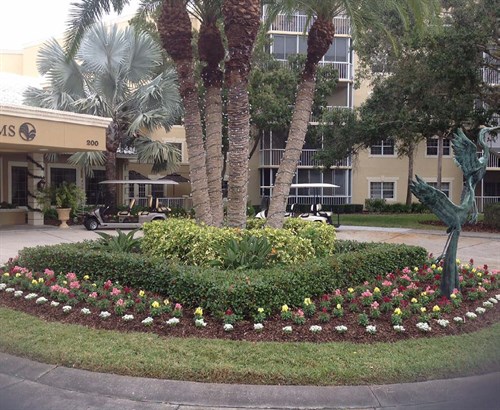 The right employees in the right positions

Today, Westcoast Landscape and Lawns, headquartered in Pinellas Park with a second location in Manatee County (located farther south on the Gulf Coast) delivers a full range of landscape and lawn services to a mix of clients in the 10-county area in and around Tampa. The company is owned and managed by Ronnlof, Harbord and two partners, including Bruce Sabine, a third brother-in-law who joined the company in 2007 and is now vice president. Dan Schmitt, now is in his fifth year in the organization, is COO.

“Bruce, right from the go, made sales look easy. He’s always telling others ‘it’s easy to sell something you believe in,'” Ronnlof says. “Dan came from the corporate side and his love for structure and operations was a perfect fit. He has designed and implemented most of the structure that keeps Westcoast operational and efficient. John and I share the financial rolls and, most importantly, the overall vision and course of the company.”

Westcoast Landscape and Lawns, like all successful small businesses, is built upon engaged, responsive management; well-trained, dedicated employees (240 in peak season); and a commitment to delivering superior services at competitive prices.

“We know we are only as good as the people who surround us,” says Ronnlof, a native Floridian. “That’s why in 2015 we made Bruce Sabine and Dan Schmitt partners. They’re huge assets to the company, and we wouldn’t be where we are today without their help.” 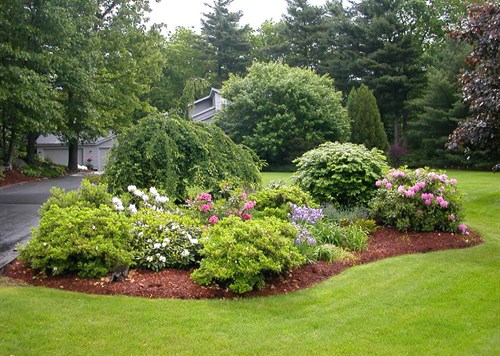 No less vital to the company’s success is its frontline employees, the folks who do the heavy lifting on clients’ properties. Westcoast Landscape and Lawns is among the 4,000 or so landscape companies in the U.S. that rely upon the H-2B seasonal worker visa program to supplement its workforce.

“We get pretty much the same H-2B workers each spring, adding new workers as our company grows,” Ronnlof says. “They’re extremely hard working and loyal. Because we get most of the same workers back every year, they’re experienced. They’re also familiar with our services, properties, policies and our structure. Even so, we spend time updating them on our polices and practices every spring.” 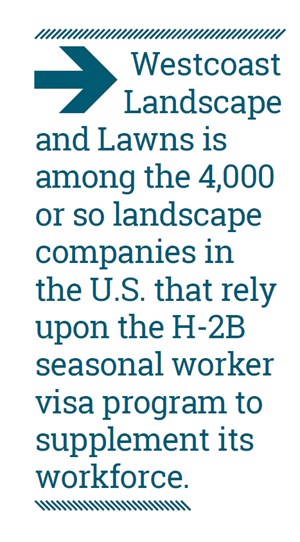 Ronnlof adds that H-2B visa critics are missing the point about the program. He insists the non-immigrant, seasonal visa program is not about acquiring “low-cost” labor. He points to the premium his company pays in meeting all of the legal and regulatory obligations required to obtain them each year, as well as pay for other expenses, including their travel expenses to and from their home countries to Florida to work for Westcoast Landscape and Lawns.

Beyond that, the Florida company makes sure all workers are legal, as well as requires drug testing and background checks for job applicants.

“We try to maintain a ratio between our local employees and the H-2B workers because we realize things can change with the [H-2B] program,” continues Ronnlof.

Each of the company’s crews is dedicated to a specific property by division so that each crew member is familiar with the property and its client’s needs and requests. The company management believes this ensures the crews consistently deliver “tailored services,” Ronnlof says. “We rely heavily on our team and innovative technology to help with efficiency. The one doesn’t work without the other,” Ronnlof says. “You can have the best software program in the industry, but if the structure is not in place then it won’t work. We focus on structure and training, which gives us the ability to have a larger range of services.”

Ronnlof admits it’s a challenge to service such a large chunk of coastal Florida. “But with technology it has become much easier in recent years. We use software programs to help us maximize our on-site time and minimize drive times. I can’t help but remember when me and John would sit down with a map and use thumbtacks to schedule our routing.”

The future is bright

Where does Westcoast Landscape and Lawns go from here?

“More growth, but organic growth,” is Ronnlof’s response. He says his company came out of the 2008-2009 recession and the region’s real estate meltdown battered but also battle-hardened. Today he and his partners view the Gulf Coast market and their company’s future prospects optimistically. 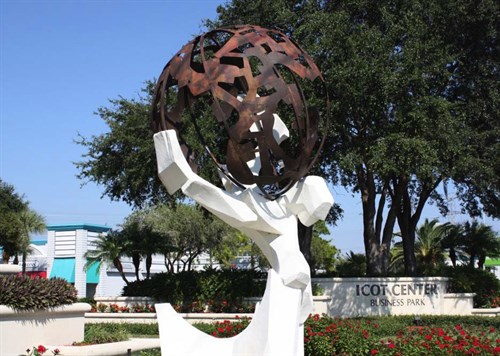 “We’re seeing some very large projects under development in our market,” says Ronnlof. “Also, we’ve been seeing other companies starting to bid things properly, bidding numbers that we all need to stay in business and to grow. It’s been nice seeing it bounce back after a fairly tough time.”

Previous post Turf or No Turf? That is the Question