5 Exciting Technologies For 2017 And Beyond

It's important to stay informed of new technology and understand how it can and will impact your business.

Useful products arising from technology are generally the result of one compelling idea providing clues suggesting the next steps forward. Here are five exciting technologies that, I feel, will have a greater impact on our green industry businesses not just in 2017, but into the foreseeable future, as well.

In mid-March, the U.S. Environmental Protection Agency registered Zio fungicide for turf and ornamentals. Developed by AgBiome, Zio was developed from the Pseudomonas chlororaphis bacteria. SePRO, which is marketing the product, says it provides preventive and curative activity against a wide range of soil-borne and foliar diseases in both turf and ornamentals.

While biological products for turf or ornamentals have been used in the green industry for decades with varying degrees of success, Zio’s multiple modes of action increase its effectiveness as well as complement other disease control chemistries. Zio, essentially living microbes stabilized in a wettable power formulation, is “commercial-level shelf stable,” SePRO adds.

AgBiome, founded in 2012 by six veteran crop protection specialists, continues to identify and test thousands of microbes via its proprietary Genesis discovery platform. The company, based in Research Park Triangle, North Carolina, has other biological and trait-based products at various stages of development aimed at controlling plant diseases, weeds and pest insects.

Does the release of Zio as a commercial product by SePRO mark the beginning of a new era in the development of biological plant health products? Will other plant health care companies bring similarly innovative biologic or trait-based products to our market? Let’s hope so.

When I was a youngster, Mr. Nichols, the stern but fair owner of the large vegetable farm I worked on, told me as I climbed from the metal seat of his 1950-ish Allis Chalmers tractor, “Kid, some folks can plow a straight line and some folks can’t.” I got the point.

Thanks to today’s precision-guided farm tractors, straight lines don’t have to be a problem, even for an inexperienced operator. That day seems to be at hand for landscape equipment, too. I’m referring to programmed autonomous steering that Kubota Tractor Corporation, through an alliance with Indianapolis-based Smart Path Systems, is bringing to the market this spring.

Operators have the option of taking predetermined paths created in the web portal management system or record their own path. This allows an operator to replay the exact same route at any time in the future — for plowing snow and sweeping walking trails, spraying along fencerows or cracks and repeated mowing by less-experienced operators.

3. What’s the deal with robotic mowers?

The golf course is the place where robotic mowers are beginning to have their biggest impact. Cub Cadet’s RG3 robotic reel mower for golf course greens was introduced several years ago. Also, John Deere, working with the National Robotics Engineering Center in Pittsburgh, has developed a prototype of a robotic mower that can mow a golf course autonomously, safely and precisely, while sensing and avoiding small obstacles (like golf balls) reliably. 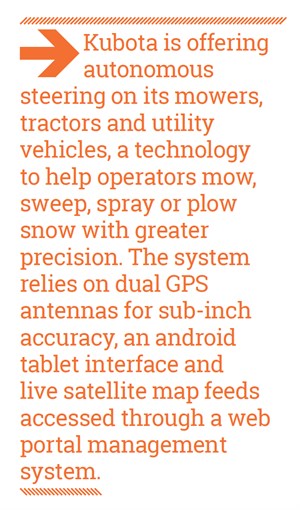 These developments suggest that the development of robotic mowers for large, relatively open industrial and commercial properties may not be that far off.

But, is a robotic mower for commercial and residential properties available or even near commercial development?

Well, yes and no.

Yes, Husqvarna offers a robotic mowing solution, its Automower, now in its 20th year of development. Husqvarna says its Automower, with 1 million units in use globally, has many practical commercial applications, residential and commercial lawns included.

The Automower system consists of three main parts – the mower, the charging station and boundary wires that are installed around a property (including flower beds, etc.) several inches below the ground. The mower itself is available in several different sizes.

Equipped with anti-theft and safety sensors, the Automower can be programmed to operate any time, even in the rain or at night because it is so quiet. Because it can mow continuously (stopping only to return to its charging station), it cuts just a fraction of the turfgrass at a time, resulting in healthy, attractive lawns, says Husqvarna.

But, no, a robotic solution that landscape contractors embrace that resembles or replaces the zero-turn mowers found on just about every contractor’s trailer doesn’t seem likely anytime soon.

Cruising through the garden shop of my local superstore, I was tempted to open my wallet for what appeared to be an incredible bargain. I saw several corded, electric trimmers and edgers offered at 70 percent off their original price.

Were the savings enough to justify the hassle of schlepping a long extension cord from my porch or patio every time I used one? Probably not, I decided.

Even at full price, the battery-powered products seemed the better choice.

That’s what’s happening in the consumer market: homeowners are selling their corded electric products at yard sales and replacing them with battery-powered products.

The choice for professional users is different — battery-powered versus gasoline-powered handhelds. While commercial users still overwhelmingly prefer and use gasoline-powered handhelds, battery power is becoming increasingly popular. Advancements in product and battery development (including power) are narrowing the productivity gap to gasoline units. Quieter and with fewer maintenance requirements than comparable gasoline units, battery-powered options will increase as contractors become more familiar with charging them from their service vehicles or trailers. 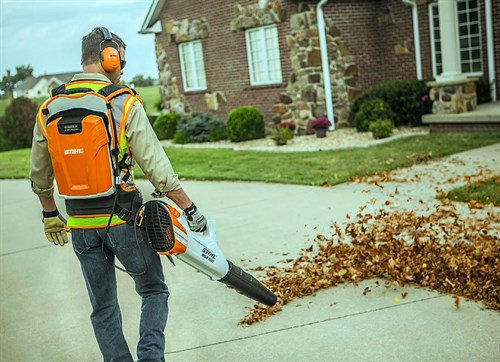 5. Is there a drone in your future?

Green industry companies are using drones for marketing purposes and are expected to begin using them for aerial views of worksites, especially related to construction or plant health care in nursery operations, too.

While hobbyists, like myself, comprise the huge majority of small drone enthusiasts, the number of commercial users (including green industry professionals) is starting to take off, thanks to the Federal Aviation Administration simplifying the rules for business use in August 2016.

Earning the Remote Pilot Certification today is much simpler than it was prior to this past August. Now the most challenging hurdle to earning the certification is passing a multichoice test at one of many FAA testing facilities. Passing the test is not a slam-dunk and requires a fair bit of study first, but it’s doable, say folks that have taken it.

If you don’t want to go that route, you can use one of the many drone services companies springing up all over the country.

Read more: How Drones Could Transform the Landscape Industry