Some states have passed laws requiring employers to offer paid sick leave to their workers.

Whether workers have access to paid sick leave is gaining a lot of attention the past couple of years, along with efforts to lift the minimum wage and provide extended family leave for new parents.

In fact, last year, President Barack Obama required federal contractors to offer paid sick days to employees by signing an executive order, and this year some cities, including Spokane, Washington, and Minneapolis, have passed laws requiring most employers to offer paid sick leave to workers.

Those in favor of offering paid sick time say the policy promotes better health by discouraging ill employees from coming into work and provides workers flexibility to take care of themselves and their families. Those who oppose the policy say it can be too costly, especially for small business owners. 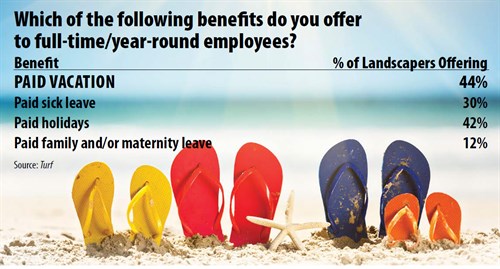 Recently, the U.S. Labor Department reported some information from their survey to provide a gauge on where companies are at with offering paid sick time. Among the top 25 percent of income earners — those earning $28.60 an hour or more — 84 percent had access to paid sick leave. Among the bottom quarter of workers — those earning $12 an hour or less — 39 percent had the benefit as of March. Less than half of those in construction and agriculture-related fields received paid sick days, the Labor Department reports.

According to Turf research from March 2016, 30 percent of landscape contractors currently offer paid sick leave to their employees.

Next post Why Battery-Powered Mowers are in Your Future