Benefits aren’t typically part of the conversation when a landscape business owner or manager is interviewing potential employees—at least in the traditional sense.

Estimates for what percent of industry companies actually offer benefits is pretty low—from roughly 15 percent of companies, according to Terry Delany with Davis+Delany, an industry consulting firm specializing in employment issues, to approximately one-third of companies, says Ed Laflamme, industry consultant with The Harvest Group. PayScale’s research came in the lowest, reporting that less than 10 percent of landscaping workers receive medical and dental insurance and less than 5 percent receive vision insurance.

But what defines benefits today is what makes that percentage tough to confirm.

According to Turf‘s Compensation Survey, 38 percent of landscape professionals offer none of the traditional benefits we listed on our survey. Forty-four percent of landscape professionals offer paid vacation and 42 percent offer paid holidays. Only 30 percent said they offer medical benefits and paid sick leave, followed closely by an annual bonus at 29 percent. Only less than 20 percent of contractors offer the rest of the benefits we listed (see the “Benefit Check” chart below).

But there are exceptions.

After only four years in business, Joshua McCarty, owner of Mint Landscapes LLC in Lacey, Washington, is going to start offering benefits in 2016 to his employees who are foreman level or above. He currently has three full-time employees. He’s had interest from one manager so far. “The cost isn’t dramatic for health benefits—maybe $120 a month out of our pockets. It’s worth it if it makes our employees happy.”

But even if businesses can afford to offer benefits, many times employees don’t want them.

Delany offered his employees at GroundSERV (the multimillion dollar commercial business he owned before starting his own industry consulting firm) a deeply discounted supplemental insurance package. “Once a quarter, a lady would come in and talk about it,” he explains. “Normally, it would cost $30 a month but it was $7 for my employees. Every time she’d come in and talk, maybe one out of 30 employees would be interested. After awhile, we just told her to stop coming. I couldn’t convince these guys it was important.”

“The worker mentality is, ‘Show me the money,’” Laflamme adds. “They don’t care about tomorrow or next week or next month. They just care about how much money they make per hour.” 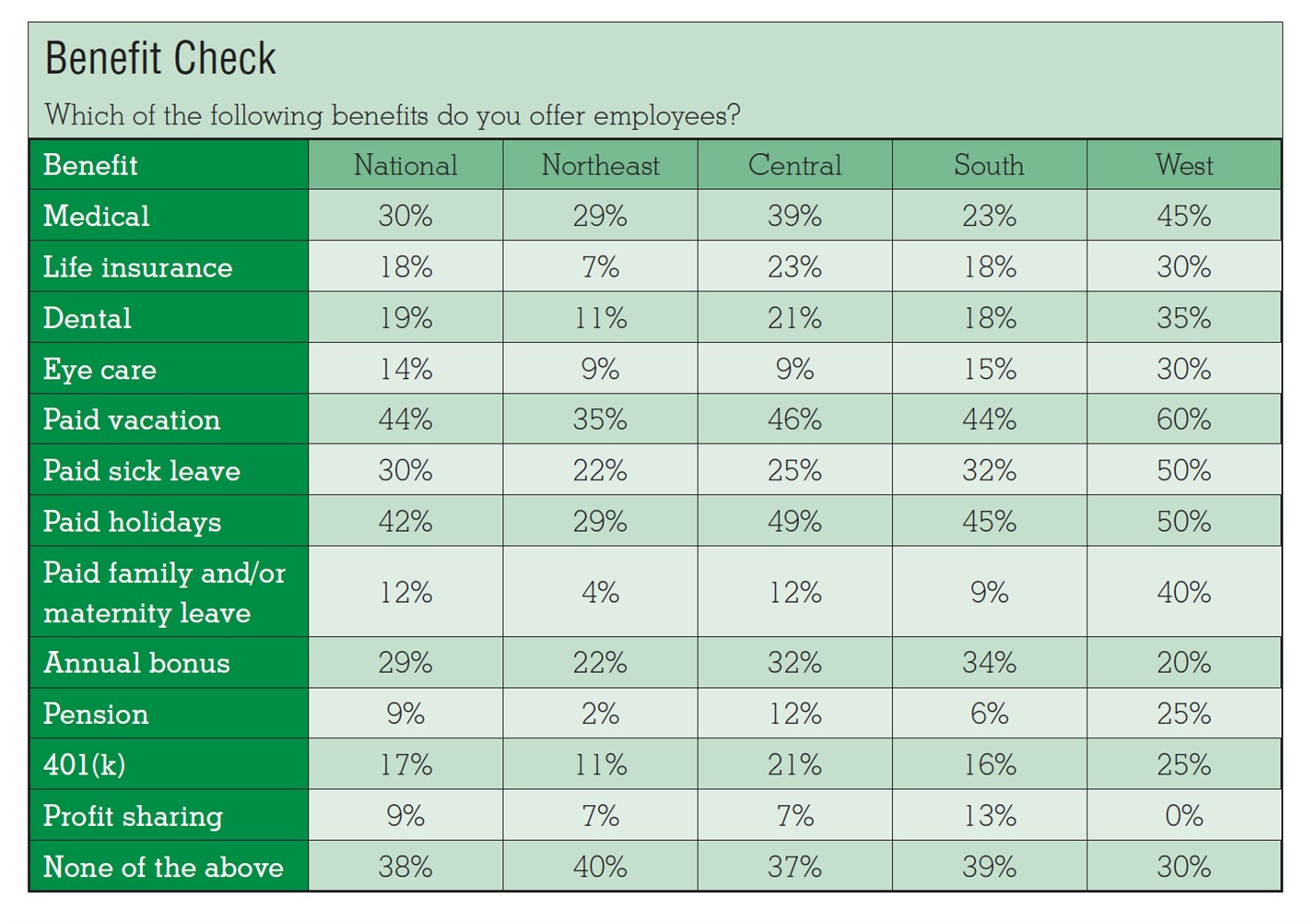 Many of the landscape contractors answering the Turf survey shared the creative ways they retain employees beyond traditional benefits.

Ideas start with what McCarty calls “the little things.” Monthly, McCarty will pick up smoothies or cool drinks for employees on hot days. He also will treat his lead (foreman-level employee) to movie tickets occasionally because he enjoys going to the movies. “I want them to know I appreciate what they do,” he says.

Delany had employees who valued flexibility. One office manager he hired wanted to be able to leave early to attend children’s sporting events or take off when her children were sick. “She always made up the time she missed and worked hard because she appreciated the flexibility,” he says.

His employees in the field loved when he switched from five eight-hour days to four 10-hour days. “The three-day weekend was huge for them,” Delany says.

Want to boost productivity? Offer employees incentives based on work accomplishments as a benefit.

Chase O’Shea, owner of Chase Lawn & Landscaping in Tulsa, Oklahoma, gives employees incentives at the end of each month if the company doesn’t receive client complaints and if properties are maintained in a certain time period. Foremen can earn an extra $500, while crewmembers can earn an extra $200.

After a 90-day probationary period, Lawn ReLeaf‘s employees are eligible for bonuses and paid time off.

For every month a field employee works past 90 days, he or she earns one day in personal time off, so after one year and three months, that adds up to one week to use as needed. By three years, that doubles to two weeks of paid time off.

The first incentive is available if they save time on a job. “If a job should take a two-man crew 10 hours, for instance, and they do it in eight, they’ve shaved two hours off of the total job time, so they would receive half of their hourly or salary rate times the two hours,” Dennis explains. “For instance, if they are a $10 an hour employee, they would receive a $10 bonus.”

The second incentive is given to employees who help cross-sell other services to customers. “Cross-selling is huge. Since our crews are on the job sites all of the time, they see what’s going on. They can see if there’s a leaky irrigation valve or beds that need to be weeded or hedges that need to be trimmed,” Dennis says. “All a crew has to do is write what they see on the customer’s job sheet. Then we call the client and after we get the work and are paid for the job, the crew who referred the client can receive 5 percent of the job, sharing that money.”

“These incentives help us build a huge pipeline for work,” Dennis says. “And if employees are helping the company be more profitable, we want to help them.”