Can Your Can Do This?

Whatever your New Year’s resolutions were, it’s doubtful the list included buying a new gas can, but maybe it should. As of January 1, 2009, all portable fuel containers sold in the United States are required to conform to two new regulations:

1. They must meet new federal Mobile Source Air Toxic regulations, based on California’s CARB regulations that have been in place there and in some other states for a number of years; and

2. They must meet the requirements of the Children’s Gasoline Burn Prevention Act (Public Law 110-278, 122 Stat. 2602- 2603), signed into law by President Bush last year, by including childproof features. 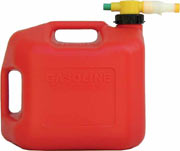 As of January 1, 2009, all portable fuel containers (such as this model by No-Spill) manufactured nationwide will need to meet new federal regulations regarding emissions and child safety.

These new regulations do not apply to OSHA-approved metal safety containers (required on construction sites and which may be required on some landscape/tree care jobs; check with your OSHA representative), but rather to the common red plastic, portable gas cans. The regulations apply only to newly manufactured gas cans, and there is no requirement on the part of users to discard their existing cans or to upgrade.

However, doing so may make sense. While the federal government’s CARB-related requirements were passed with an eye on saving the environment, they can also save the end user money in the form of reduced gas spillage.

The EPA estimates that there are about 80 million portable fuel containers (PFCs) in use in the United States. Further, it estimates that in 2005, commercial users alone dispensed approximately 2.15 billion gallons of fuel using portable fuel containers. Combined with the 1.12 billion gallons of fuel dispensed by homeowners from PFCs, that results in an estimated spillage of 70,262 gallons.

The environmental problem with gas spills has to do primarily with the VOCs (volatile organic compounds) that escape into the atmosphere any time gas leaves the container. VOCs can even permeate through the plastic container itself, and, VOC emissions can occur when caps are left off fuel cans. The new regulations target these three areas.

VOCs can be extremely harmful. In addition to acting as greenhouse gases, they can contaminate groundwater and cause a number of health problems, from headaches to central nervous system damage to cancer. EPA data shows that “left uncontrolled, the evaporative emissions from a gas can are up to 60 times the VOC of a new Tier 2 vehicle evaporative control system.” In other words, all of the technology that’s put into controlling VOCs in automobile fuel systems is wasted if gas cans don’t keep pace.

Different portable fuel container manufacturers have taken different approaches (nozzle design, self-venting systems, etc.) to meet the regulations, explains Mark Pierce with No-Spill (www.nospill.com), which offers cans that meet the new federal requirements. Pierce’s uncle, Marvin Messner, first developed the concept of a gas can that employed a push-button to start and stop gas flow back in 1989 to help reduce the mess of spilling gasoline while filling equipment. “He wanted something that would keep the gas from spilling on his equipment,” says Pierce, who became involved with the company in the late 1990s. Shortly after, a major shift in regulations took place within the portable fuel container industry.

In 2000, California implemented what became known as CARB (California Air Resources Board) regulations, which mandated nozzles that automatically stopped when the equipment was full, and which were self-venting and self-closing. “At the time, our product did everything except for auto-stop, so we redesigned the nozzle to do that, as well,” says Pierce of the “California Model” the company developed.

However, the impact of the regulations was constrained by the poor design of some PFCs produced to meet those regulations, many of which were cumbersome and/or dramatically slowed fill-up times. “Many brands on the market were very unpopular in California,” says Pierce. “The state discovered that so many users were frustrated with some of these products that they were just taking the nozzles off and pouring the gas right out of the can, or punching holes in the back of the can so it would fill faster, things like that, all of which defeated the whole purpose of the regulations.”

In 2007, California introduced Phase II of the CARB regulations, which eased some requirements. “They got rid of the auto-stop requirement and the requirement to fill within an inch of the top of the filler neck; little things that made the regulations hard to meet. They also reduced the internal pressure requirement without venting into the environment from 10 pounds down to 5 pounds,” says Pierce. The state did slightly lower the allowable level of permeation (the molecules of VOCs that permeate through the plastic).

During the intervening years, 15 states adopted PFC regulations based on the California model, and the second wave of California requirements served as the model on which the United States EPA has based its new nationwide requirements. “There’s a sell-through period, but any PFC manufactured after January 1, 2009, must be EPA-certified,” says Pierce.

Any portable fuel container manufactured after January 17, 2009, must also be certified as childproof. “That was a pretty big change for the industry,” Pierce says. “We didn’t have to redesign our whole product, but it was a matter of adding on pieces: something to protect the thumb [on] button, as well as a ratcheting piece to keep the nozzle screwed down tightly, and anyone opening it has to hold down some tabs while unscrewing it.” The program is being administered by the Consumer Product Safety Commission.

Pierce recommends that users shop for a PFC that meets this requirement in the most “unobtrusive” way possible in terms of its impact on everyday use. “It’s important not to design safety features in a way that aggravates the consumer,” he says.

To help spur adoption of the new PFCs, some states and organizations are organizing trade-in programs. “The state or county will purchase a number of containers from a manufacturer at a promotional price, and then offer them either free with a trade-in of an older can, or at some reduced price to try to get the old cans out of circulation,” explains Pierce.

Picking the right can, and using it properly, can save you money and help protect the environment.

Patrick White is a freelance writer and editor who has covered every aspect of the green industry in the past 13 years. He is based in Middlesex, Vt., and is always on the lookout for unusual stories.