“The landscaping business was started about 14 years ago with an outside partner. Since then, we have acquired and partnered with others, but for now, we are all in the business, meaning the five siblings. However, Brian is the sibling in charge,” says Gerrit Strathmeyer, who is spokesman for the company.

The landscape development firm services residential and commercial operations. Strathmeyer has noticed that the downturn in the construction industry has lessened their construction-based contracts. “We did a lot of work for builders. As they slowed down, we got less and less work. We adjusted by cutting overhead and focusing on just two builders. We now do almost exclusively all the landscaping work for both of them,” Strathmeyer says.

The company provides landscape design, installation, water features, lighting, maintenance, hardscaping and IPM services. They are a Pennsylvania Preferred company, which means they are part of a program designed to identify locally sourced Pennsylvania products.

Companies everywhere are reorganizing their structure to cut costs and gain more clientele, and for Strathmeyer Landscape Development, it isn’t any different. Their sales force constantly scouts for new jobs to bid on to fill the company’s calendar. “We have also cut costs in other areas and focused our sales team, making them more responsible for every action. As the economy starts to come back in different ways, we have positioned ourselves for that bidding more government work; as they put more infrastructure jobs out there, we are bidding more,” Strathmeyer says.

The maintenance department is Strahmeyer’s strong arm, which has grown steadily over the years, including the 2009-2010 season. Twenty-five full-time employees and 30 part-time employees, which include seasonal workers, work for Strathmeyer Landscape Development.

The company does do a limited amount of snow removal during the winter months, however, Strathmeyer says, “[We] really don’t like to [do it] because of the wear and tear on equipment.”

Getting the job done

Strathmeyer’s biggest business challenge has been working for the government due to the mountain of paperwork that needs to be completed for each project. “We have had several jobs that require putting one person in charge of all the paperwork. That adds to the overhead, but in the end, you save on redoing things because of the wrong paperwork,” Strathmeyer says.

For many businesses, marketing takes a special talent when trying to get residential jobs versus commercial gigs. For Strathmeyer, putting their company’s name on the bid list of a potential commercial client is pretty straightforward. “This is not to say that once we get a bid, we don’t work hard at becoming the ‘go-to guy’ for that company.”

However, garnering residential clients takes a different kind of approach. “We have to prove ourselves every time. We do the Harrisburg and York [Pennsylvania Garden Expo] and Mid-Atlantic Garden Expo in February and March; we also do the door-hanger thing, which is to say when we have a [residential] job, the salesman goes in a circle around the job to the neighbors and hands out cards and info,” says Strathmeyer.

The company also utilizes a computer software program called Asset, where every call is logged in for the sales team to follow up on. “This way, management can watch the progress of every job without constantly asking [the sales people],” Strathmeyer explains.

Of course, the old-fashioned way of doing business includes honesty, hard work and a good reputation. “Like the mother business, Strathmeyer Forests, Inc., we are locally grown and make sure we stay grounded. Our father taught us to do business on a handshake; do every job as if we’re working at [our] house, and at the end of the day, take a look back and make sure [we] are proud of what [we] have accomplished today,” Strathmeyer relates.

“We have been privileged to have worked on many projects that are both unique and memorable, from the waterfall project in Maryland to a hotel in Virginia to the recently near completion Aberdeen project. We have been blessed with talented, dedicated workers that are proud of what they do,” says Strathmeyer.

There are three landscape designers working at Strathmeyer Landscape Development, but Mark Zeiders takes the lead when it comes to residential customers. Zeiders graduated from Virginia Polytechnic Institute in Blacksburg, Va., and has worked in the industry for over 30 years and has been with Strathmeyer Landscape Development for the past three years. “Mark generally meets with the potential customers on-site and puts his ‘ears on.’ He listens to their wish list. Then, somewhere near the end [of the conversation] asks the important question: ‘Do you have a budget?’ We have found numerous people want this and that, [but] have no clue as to the costs. So, before we go and put a lot of time into a design, we try to get the customer to work on a budget,” explains Strathmeyer.

From that point, Zeiders helps the potential clients figure out a budget that works for them, as well as allows them to design their property. If the homeowner requests it, Zeiders will give a general cost estimate. From there, the homeowners and Zeiders will go into detail of what the project will cost. “When [Zeiders] has jobs requiring lawn work, he generally will meet with the foreman at the job site and go over the job details. When the job is complete, [he] then meets with the homeowner and goes over the entire job to make sure that the dream is realized,” says Strathmeyer.

Strathmeyer doesn’t have a magical formula for success or even survival in this economic climate. “Advice is cheap and easy to come by. Follow what is in your heart, do what is your passion and listen to the guy upstairs. He never seems to make a bad call,” advises Strathmeyer.

Strathmeyer Landscape Development is a family business that provides an example to other companies who want to continue to provide beautiful landscapes.

The author is a freelance writer based in Ephrata, Pa. She writes for various trade magazines focusing on landscape companies, agriculture and business.

About the Author Wendy Komancheck

Wendy Komancheck is a copywriter exclusively for the lawn care and landscape industries. You can learn more about her at www.landscapewriter.com or email her at wendy@landscapewriter.com. She’ll love to answer your questions about Internet marketing and blogging. 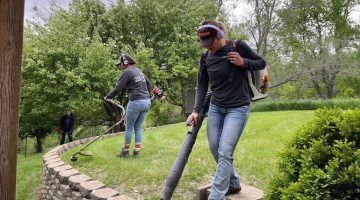