June Is The Time For Yellow Nutsedge Control In Turf

Yellow nutsedge (Cyperus esculentus) —sometimes referred to as nutgrass—is a persistent weed problem in lawns, athletic fields, and golf course turf. It thrives in moist, poorly drained soils and can persist in full sun and moderate shade. An aggressive weed, it spreads via underground stems and tubers.

Many turf managers and homeowners find its yellow color, coarse texture, and fast growth rate objectionable in stands of cool-season turf, which also makes it relatively easy to identify. Stem bases typically show a reddish hue when outer leaf sheaths are stripped away. It also has yellow nutsedge has angular, three-sided stems, which can be detected by holding and turning the stem base between thumb and index finger.

Fortunately, yellow nutsedge can be controlled using good cultural practices and proper herbicides applied at the correct stage of growth, which usually occurs late spring or early summer. (This month is ideal). A perennial, new plants are primarily produced from nodes on rhizomes and from tubers, which can overwinter. Tubers typically begin to form at the tips of rhizomes in late June or early July. A single plant can produce multiple tubers which can remain dormant in soil from one to several years before germinating. Leaves and stems emerge in spring and grow rapidly during warm weather in summer when leaf growth of cool-season turfgrasses slows. The foliage of yellow nutsedge dies back in the fall following the first hard frost.

Yellow nutsedge is typically introduced through soil contaminated with tubers and rhizomes. Although there are no practical means of detecting reproductive structures in soil, using soils from sites with no history of  infestation can lessen the chances of contamination.

If only a few yellow nutsedge plants are infesting a lawn, they can be removed by hand pulling soon after leaf emergence in spring and before tubers form later in the growing season. Be sure to remove as much of the below-ground portion of the plants as possible, since broken bits of rhizomes can give rise to new plants. Improving turf density through fertilization, regular mowing, and use of turfgrasses well-adapted to site conditions will help to slow the spread of yellow nutsedge, but may not provide effective suppression once it becomes established.

The most effective control of yellow nutsedge with herbicides is obtained when foliage is visible in the turf canopy, and before tubers begin to mature in mid to late summer. It’s important to treat nutsedge before tubers mature because these underground structures can give rise to many new plants in subsequent years. Herbicides are typically most effective in controlling nutsedge when mowing is curtailed at least two to three days before and after application.

Basagran T&O is a selective contact herbicide that contains bentazon, a photosynthesis inhibitor in susceptible weeds, as the active ingredient. This herbicide is relatively fast-acting, with injury symptoms appearing on nutsedge within five to seven days of treatment. Basagran T&O can be used on established Kentucky bluegrass, fescues, ryegrass, and bentgrass for control of yellow nutsedge and some broadleaf weeds. Control can be improved with the addition of a methylated seed oil or crop oil concentrate. A second application can be made seven to 10 days after the first application if needed, but no less than 21 days after the first application on perennial ryegrass. Trials at Penn State indicate that Basagran T&O is effective for yellow nutsedge control using a single application of 0.75 fl oz product per 1000 sq ft. Foliar injury has been observed with this product on perennial ryegrass in heat and drought stress situations. 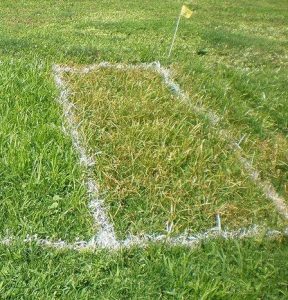 Dismiss and Surepyc are contact herbicides labeled for control of yellow nutsedge and contain 39.6% sulfentrazone as the active ingredient. In contrast to most systemic herbicides, Dismiss and Surepyc are very fast-acting. A recent trial at Penn State demonstrated pronounced injury symptoms on yellow nutsedge two days following an early July application, and treated plants were no longer visible in the stand 10 days after application. Both products can cause foliar injury to some cultivars of fine fescues and neither product is labeled for use on putting greens.

Sedgehammer, Prosedge, and Sedgemaster are herbicide products that contain the active ingredient halosulfuron-methyl, a sulfonylurea herbicide with systemic activity. These products are labeled for use on most cool-season turfgrasses. Labels suggest adding a non-ionic surfactant at 0.25% v/v to the spray solution for optimum control of yellow nutsedge. If needed, another application can be made six to eight weeks after the initial application. Sedgehammer+ is a special formulation that is premixed with a surfactant.

Sedgehammer, Prosedge, and Sedgemaster are most effective when applied to nutsedge at the three to eight-leaf stage. Although very effective, halosulfuron-methyl-containing products act slowly. In a trial conducted at Penn State, injury symptoms following a Sedgehammer treatment did not become visible until about a week after application, with complete desiccation occurring three weeks later. Although slow-acting, the active ingredient will eventually translocate to the rhizomes and tubers and kill the entire plant. For best results, do not mow two to three days before or after application.

Celero herbicide contains the active ingredient imazosulfuron, which is a member of the sulfonylurea herbicide class and has systemic activity in susceptible plants. This product is labeled for use on most cool-season turfgrasses and controls several different sedge species and some broadleaf weeds. A non-ionic surfactant at 0.25% v/v must be added to the spray solution for optimum control. Applications should begin after nutsedge plants have reached the three-leaf stage of growth. For heavy yellow nutsedge infestations, a second application can be made 21 days after the first treatment. 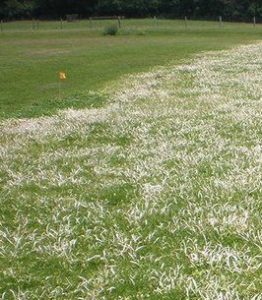 Tenacity is a popular herbicide that controls stubborn grassy weeds such as bentgrass, nimblewill, crabgrass, and yellow nutsedge with the active ingredient mesotrione. Tenacity has systemic activity but is somewhat slow-acting. Treatment effects include highly visible white plants, which may be objectionable in some cases. However, Tenacity has the advantage of being safe on newly seeded turf (except fine fescues) and can provide some preemergence and postemergence control of crabgrass. Hence, this herbicide may be a good choice if young crabgrass is present with nutsedge.

Tenacity is labeled for use on most cool-season grasses, but because it kills bentgrass, it must be used with caution on golf courses. A second application two to three weeks after the initial application may be required for complete control and for optimum control, apply Tenacity with a non-ionic surfactant. In addition to controlling yellow nutsedge and some grass weeds, this herbicide will also control or suppress many broadleaf weeds.

A recent trial at Penn State showed excellent control of yellow nutsedge infesting new Kentucky bluegrass using a single application of Tenacity at 8.0 fl oz per acre. Although the nutsedge and crabgrass in the treated area remained white for three to four weeks, the weeds were killed, and a follow-up application was not necessary. No injury was observed on the Kentucky bluegrass.

Tower is strictly a preemergence herbicide that is labeled for control of sedges and certain annual broadleaf and grass weeds. The active ingredient of Tower is dimethenamid-P and is labeled only for use on golf courses for cool-season turfgrasses. Applications should be made to actively growing established turf in spring when soil temperatures are 55°F or higher.

*Dr. Landschoot has not yet worked with Vexis and so does not include it in this article. For more information on Vexis, visit here.