A multi-tiered process created this award-winning pool and patio project.

There are just some projects that capture the eyes — and the imaginations — of many. A great example is the Strosin outdoor retreat designed and installed by Extreme Exteriors Landscape of Big Bend, Wisconsin.

What could have been just another pool-and-patio installation has earned plaudits for its use of a combination of hardscape materials from Hardscape North America, the Wisconsin Masonry Association and Unilock, which chose the project as its Best Outdoor Living Space in North America. 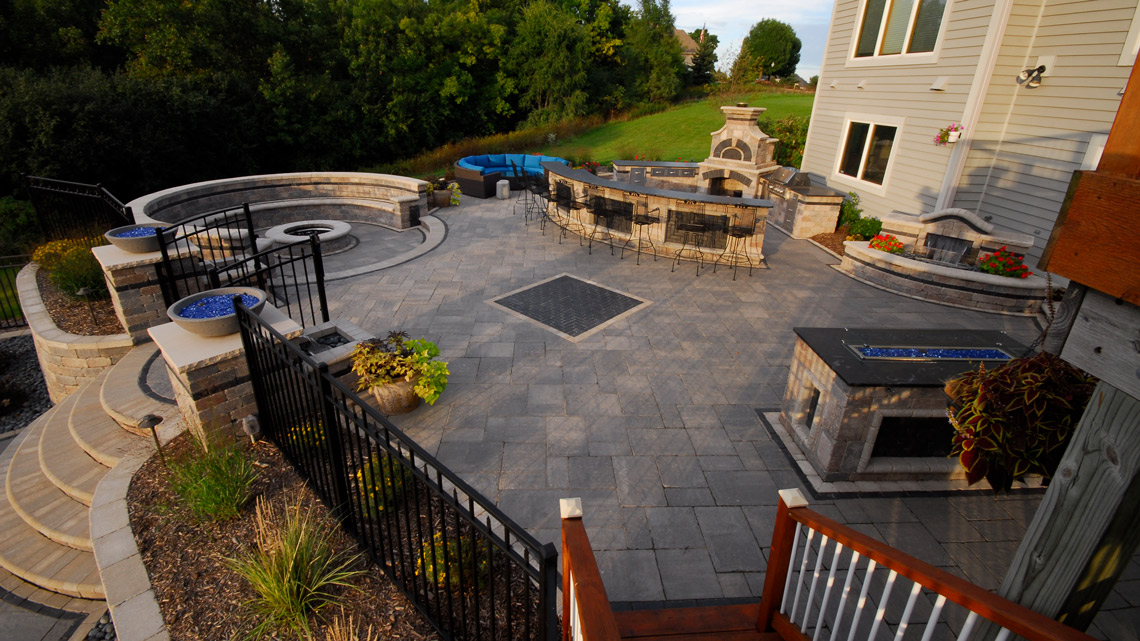 On the surface at least, the assignment probably isn’t that different from literally hundreds of other jobs done around the country. Jamon Peterson, one of the company’s owners who collaborated with Lynn Hinch of Lynnscape Design LLC of Milwaukee on the project, says the Strosins chose his company based on a referral from a friend for whom Extreme Outdoors had done a similar project.

“The client was able to see the quality of our work,” Peterson says.

An outdoor retreat can mean different things to different people. In this case, Peterson says the clients had an approximately three-acre lot in a subdivision that dropped off to a wooded area behind the 15-year-old house. 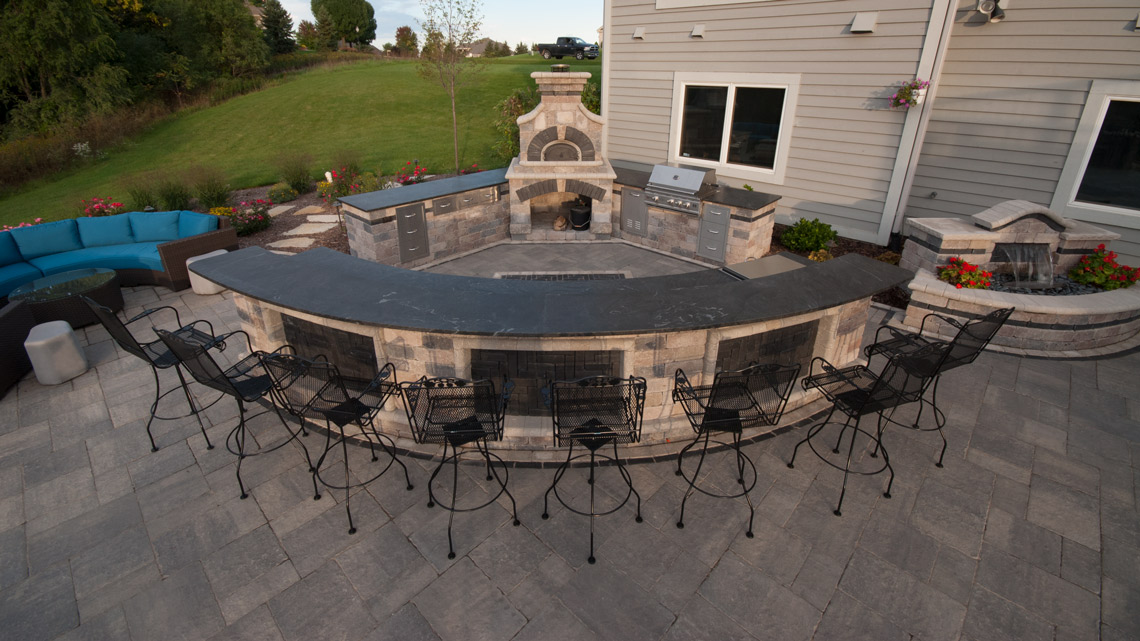 He adds that after 15 years, the Strosins were ready to turn their attention to the backyard.

“They had a 12-foot by 12-foot concrete pad off the back-patio door, and that was about it,” he says. “The whole project came to a head when the homeowners decided they wanted to put in a pool.”

While the pool headed their list of amenities, Peterson says they also wanted to better utilize the space next to the house. Also on their list were a dining/grilling area, a pizza oven and a wood-burning fire pit. 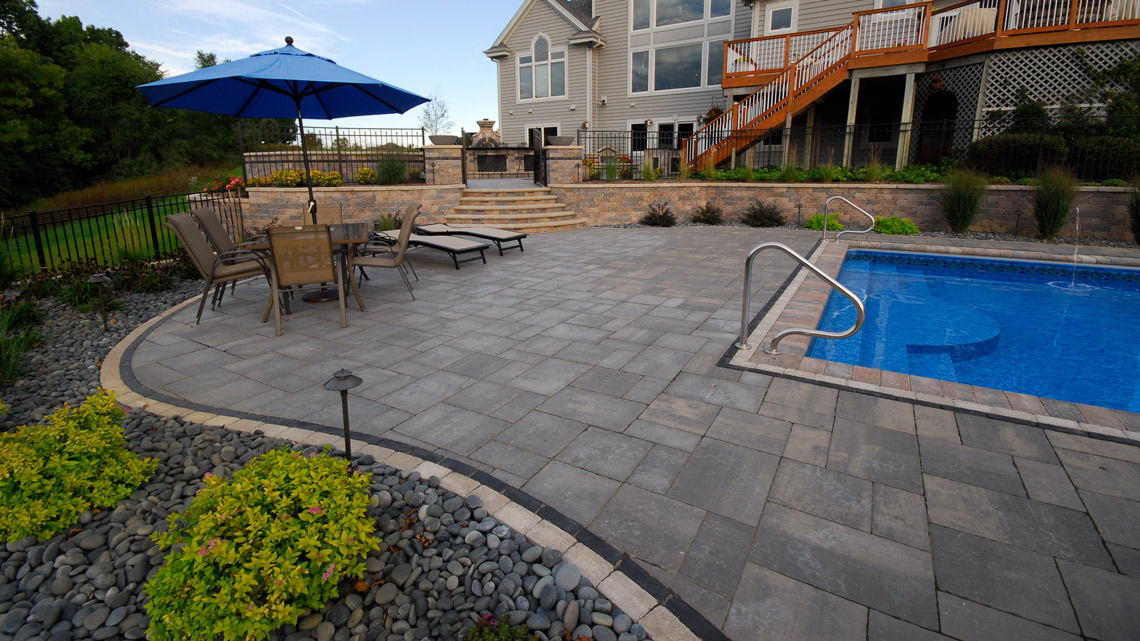 The concrete patio was torn out and the Extreme Outdoors crew and the sub who installed the 20-foot by 40-foot pool started from scratch. One of the first items up: grading and retaining walls.

“The lot dropped off roughly 10 feet in elevation between the house and a point approximately 60 feet out,” Peterson says. “It was pretty much impossible to build everything on one level, so we decided to utilize the grade and put the pool in the lower area, the outdoor kitchen in the upper area, and separate the two with a series of retaining walls.” 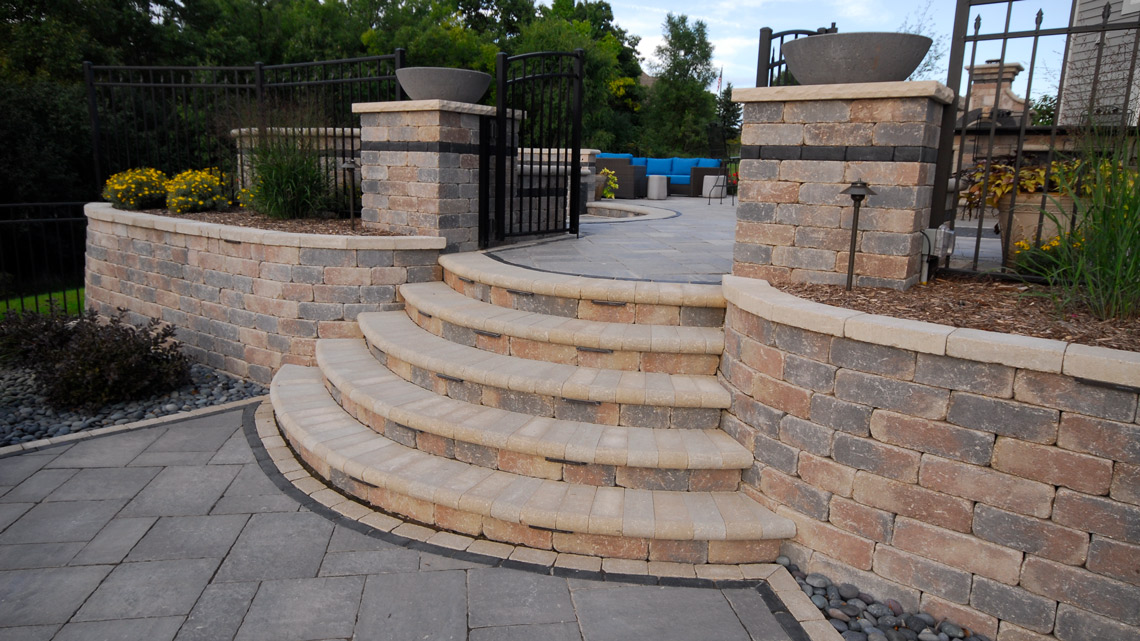 As a frequent user of Unilock products, Peterson opted to use the company’s Olde Quarry line of weathered blocks for the walls and steps, and complement them with Unilock’s Bristol Valley (with accents of Copthorne and Brussels Block) pavers for the pool deck and patio.

“We made steps and then used a full bullnose coping as the step tread,” he explains. “We chose the Bristol Valley because it would be smooth on the feet for the pool deck and then continued that all the way up to the house. The borders and accents were just a matter of what colors the customers liked.” 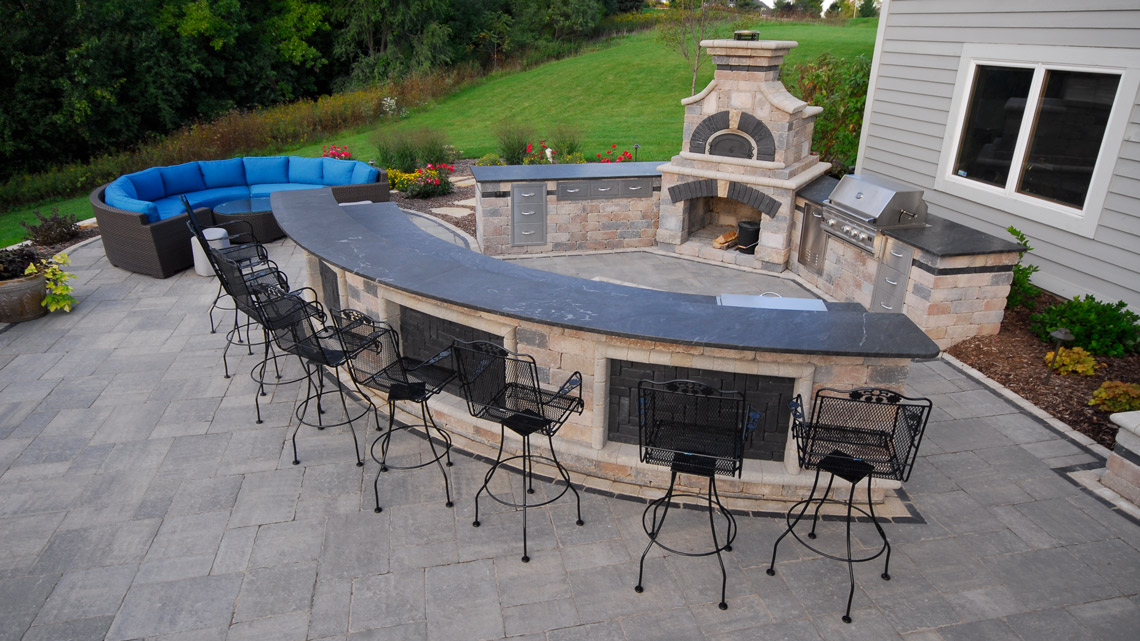 Ultimately, the project incorporated approximately 1,400 square feet of pavers at the pool level and another 2,000 on the patio area.

Peterson says his goal with the pool level was to keep the focus on that feature. However, on the upper level patio, “We tried to incorporate a lot of wow factor.”

Along with the fire pit, the upper area has a fire table and four fire bowls accenting the stairs leading to the pool area. The fire bowls are complemented by four water features that he calls fountainscapes which spill out of pillars. 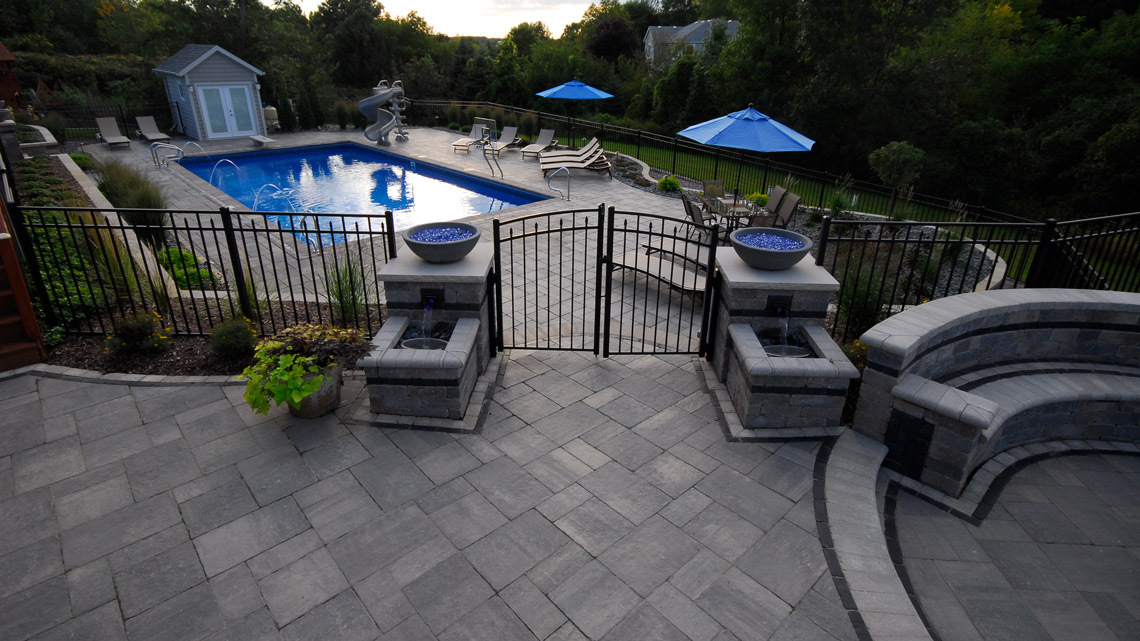 “It’s a combination of fire and water,” Peterson says.

Providing the focal piece for the patio level is a 24-foot curved bar built of Olde Quarry bricks and topped with a brush-textured granite countertop. Peterson explains that the bar can easily seat 10 people and contains an outdoor grill, a built-in Chicago Brick Oven pizza oven, a beverage-center cooler and plenty of storage. 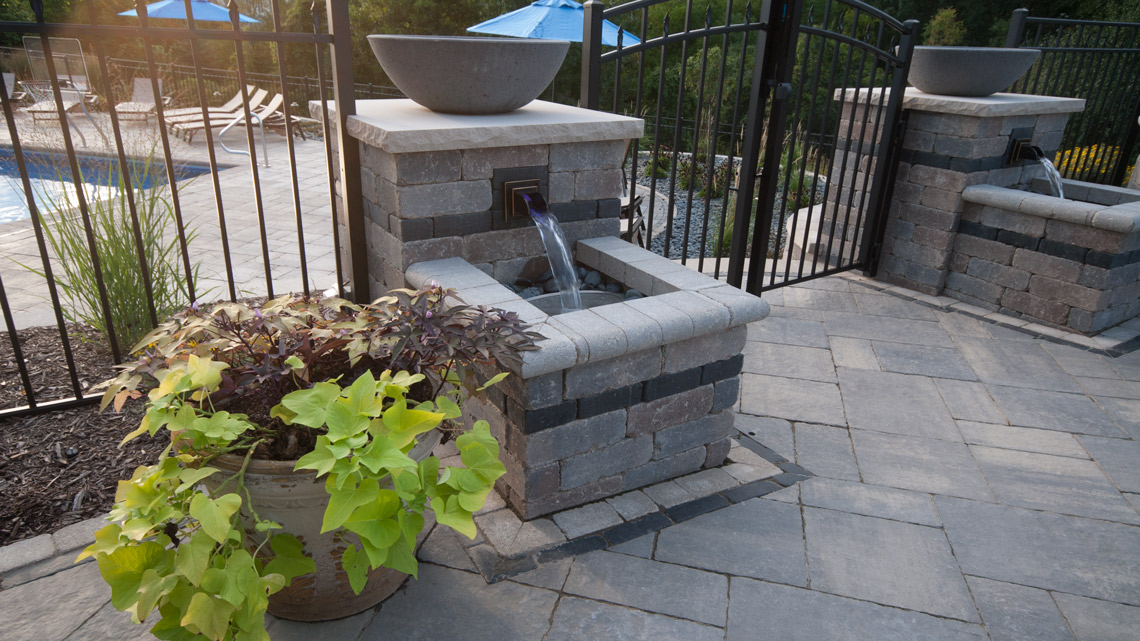 Peterson says the outdoor kitchen area is his favorite feature of the project, in part because of the layout. However, he says it also offers a great example of the detail work, including inlays and insets, that his crew built into the project.

It’s that detail — along with the job’s numerous awards — of which he’s most proud.

“We went to great lengths to make sure everything was detailed,” he says. “We built in a lot of intricacies as far as the vertical elements and the bollards are concerned.” 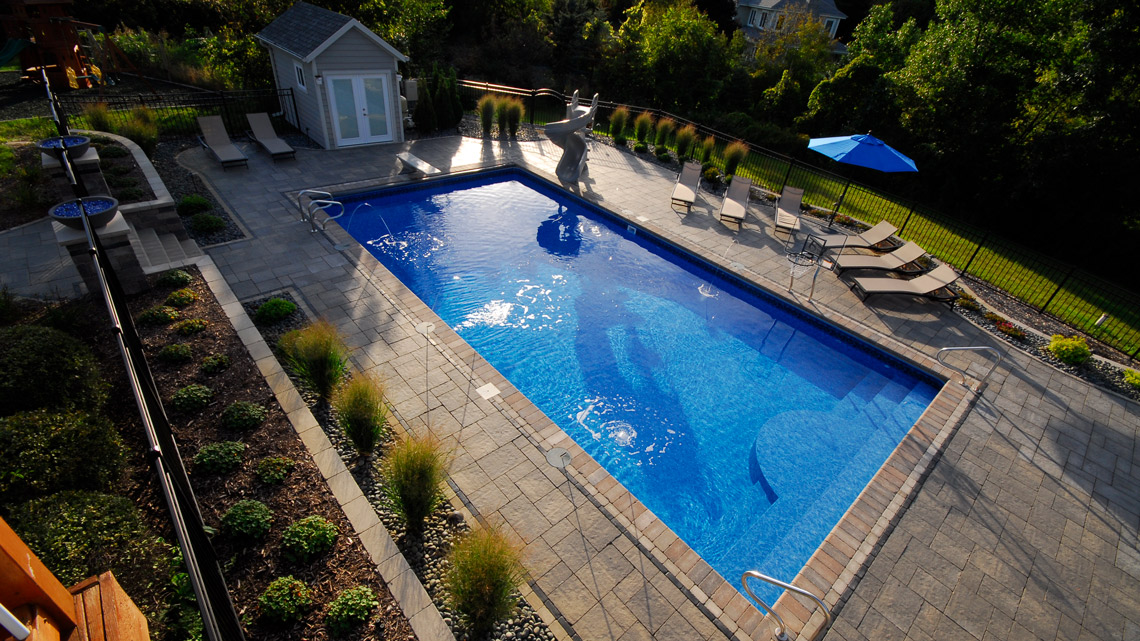 If there’s one thing some critics might feel is lacking with the upper patio it’s a shade structure for the bar. However, Peterson says that was the clients’ choice.

“He didn’t want a shade structure,” the designer explains. “He has a finished basement with a bar right off the patio, so his thought was if somebody wants to get out of the sun he can go inside.”

Because of the slope of the yard, Peterson says drainage wasn’t a problem, and mainly involved pitching everything away from the pool. Downspouts coming off the house were buried under the upper patio. While the project is sand-set on an open-graded base, some spots — such as around the fire pit — were kept permeable for water to percolate through. 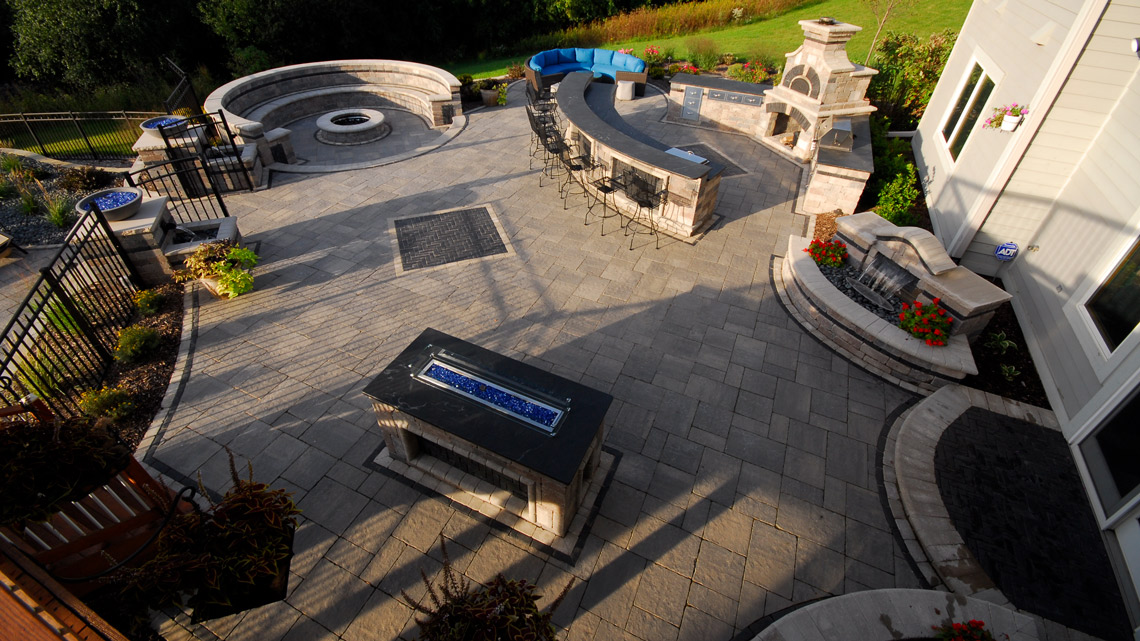 Lighting for the project incorporates more than 90 fixtures, all low-voltage LEDS. Peterson describes the lighting as a mix of path lights, up lighting for some of the trees and bushes, downlights to highlight some of the vertical features, and coping lights for the retaining walls and bar.

“Everything is accessible to the clients through their smartphones or tablets,” he says. “They can turn on the fire features and the water features and create zones with the lighting.”

The company also added a mix of trees, shrubs and perennials to the site to soften the impact of so much hardscape. And, he explains the pool controls are in a small shed which is screened by some of the shrubs.

The approximately four-month project generally involved no more than two crews at any time. 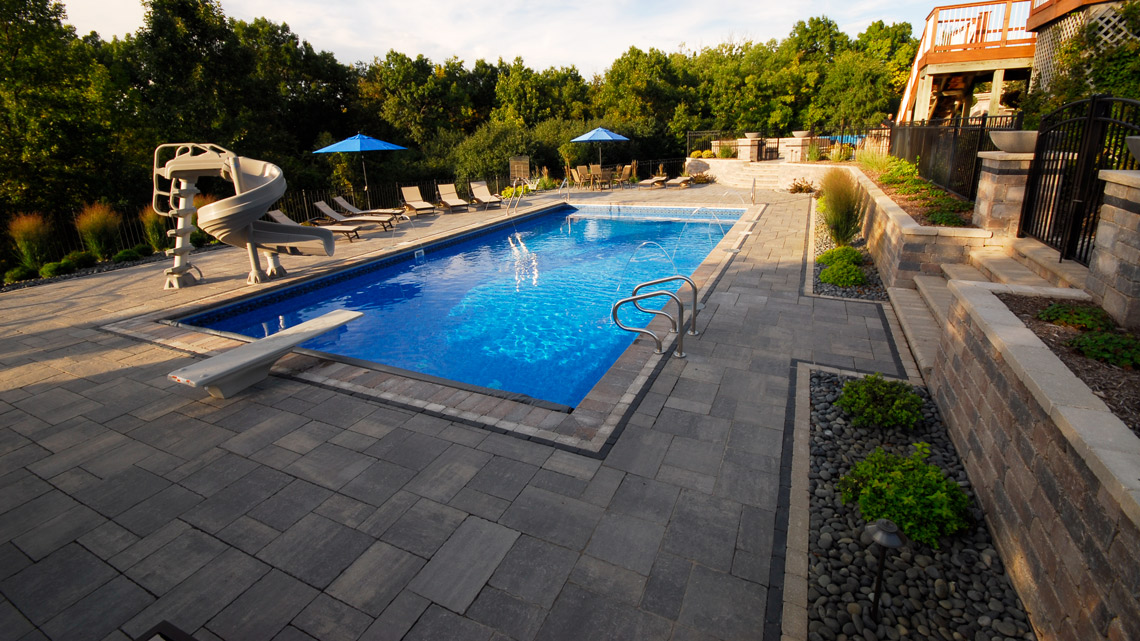 He doesn’t mind admitting the most challenging part of the job was adjusting the plan to the existing grade changes.

Perhaps not surprisingly, he says the biggest thing he learned is that large projects such as this one can be huge undertakings.

“I also learned to make sure that the substructure of a project is extremely important,” he concludes. “Everything builds off that.”

Next post Randy Strait: The Equipment King of Chicago

Previous post How Technology Can Save Your Sales From Being Terminated 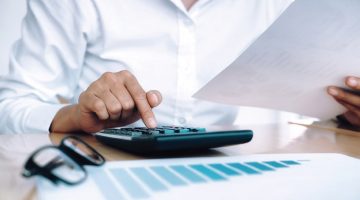