This award-winning circular patio was created by a two-man crew and includes a unique fire feature.

Their name says pavers, and the award they recently received from Hardscape North America (HNA) was in the category of Concrete Paver – Residential – Less than 3,000 square feet.

Still, Justin Hampton — who is half of a two-man-crew and owner of Paver Designs, LLC, with his dad, Jim — says the biggest challenge to their prize-winner was installing a large water feature in a very flat backyard.

The younger Hampton explains the company was hired by this client because of a previous HNA-winner that Paver Designs, which specializes in high-end projects in Omaha, Nebraska, had done for friends of theirs a couple of years ago.

“They contacted us through them,” he says. “We went out to their place several times before getting the project.”

On the surface, the job seemed simple: take a flat, bare backyard and make it into a destination.

“There was pretty much nothing there,” says Hampton. “They wanted a patio, with some sort of fire feature. They also wanted a pretty good-sized water feature of some sort. They were trying to figure out some ways to get height and elevation in their yard.” 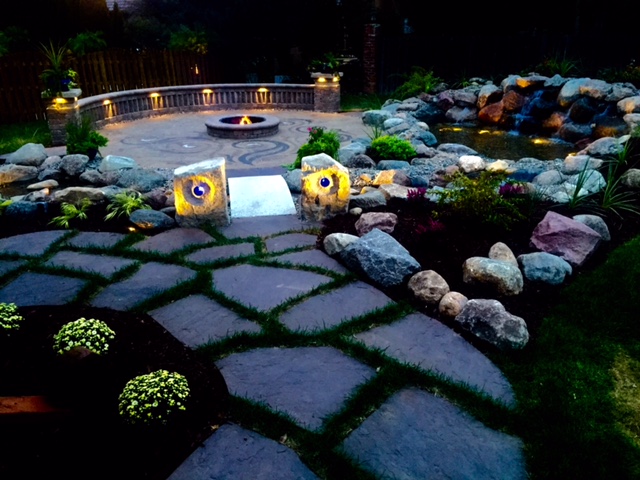 Ultimately, he adds, the size of the project proved to be a help, because by digging the pool for the water feature extra deep, the lot did provide at least some of the fill needed to create enough height for a 5-foot drop to the main waterfall.

“We had to build a 6- or 7-foot mound of dirt up, then compact it properly,” he says. “All of the stuff we tore out we repurposed, but I think we still ended up bringing in two dump-truck loads of dirt to get to the right height.”

That was not the only material the Hamptons brought onto the site. Justin Hampton estimates the job required 150 tons of base material, and another 60 tons of boulders.

Some of that makes up the 12-inch crushed, recycled concrete that was compacted to provide the base for the approximately 500 square feet of award-winning patio space, which is set on a sand base.

“There’s a stream that wraps around much of the patio, so the patio almost looks like an island out in the yard,” says Hampton. “There’s water flowing around two-thirds of the patio.”

The project encompasses a covered, raised patio next to the house, which Paver Design installed, the round paver patio with the fire pit and seating walls, and then the water feature. 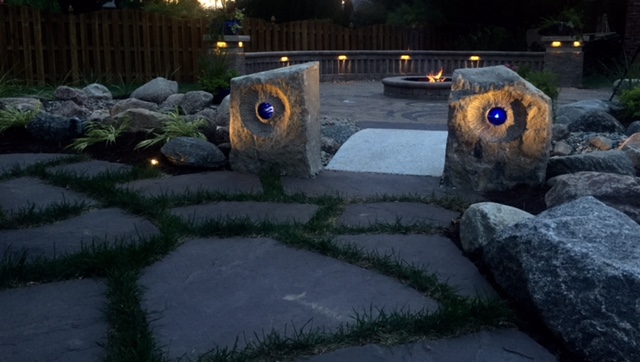 “They wanted to look out from the raised patio and see the waterfall in the distance,” says Hampton. “It breaks up the view of the fence that wraps the property, but it’s also a destination spot. They were trying to make a destination in the backyard and a reason to go out there.”

The award-winning circular patio is constructed using Mega-Arbel pavers from Belgard in an Astin blend. The seating walls around it and the fire pit are assembled from Belgard’s Weston Stone. To truly make the project special, Paver Designs set off the pavers with a custom-cut vine-type mosaic pattern cut into the pavers.

Hampton says the vines are in three different colors, black, white and brown, which set off the light-colored Astin blend. He explains the company had done vines and flowers for this client’s friends, “and they just told us to come up with some ideas and put it in.”

He adds that the vine work was all freehand-cut using diamond saws. 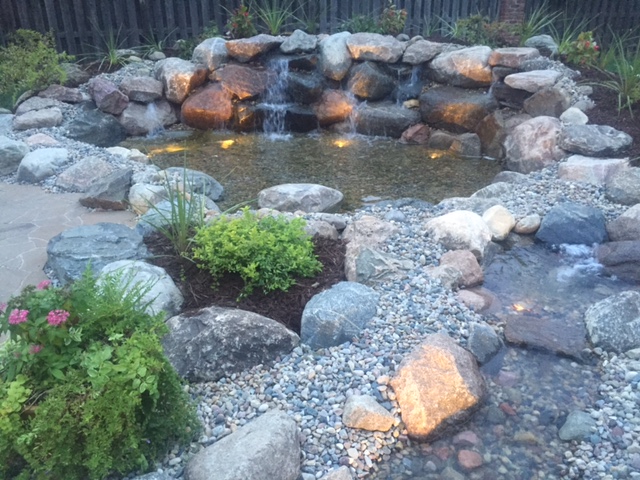 “We have a couple saws that are made specially for us because we do such intricate inlays,” Hampton says. “We can do some tighter radiuses than you can do with the typical saws most companies use.”

The Hamptons enjoy adding extra value to their materials. Because of the stream flowing around the patio, they carved a granite boulder to make a stone bridge, and carving also plays a role in the lighting scheme for the project.

Hampton estimates there are 28 ledge lights in the walls themselves, and about another dozen up-lights in the pond and water feature.

“And, at the corners of the bridge, we hand-carved two big limestones and then drilled holes in them,” he says. “There are glass spheres that sit inside it. They’re backlit with LED lights, so at the night the spheres glow almost like eyeballs. We’ve done that on a couple projects now.”

It’s those eye-like lights that make Justin Hampton smile when he thinks about the project.

“The client was a little sketchy about it at first, but they let us do them,” he says. “I think they’re happy about it now because it’s a conversation piece when people come over to hang out on the patio.”

Personally, Hampton is proud of the way the project came together over the four weeks it took to complete the $80,000 installation.

“Sometimes you see projects where it looks like they did a patio and then they added a water feature and then a seat wall,” he observes. “This blends into a very cohesive look. Everything flows together and that’s the way it should be, although it can be tricky when you’re using different materials and products.”

He’s also proud of the water feature, although Hampton admits it proved to be a learning experience.

“The water feature was definitely educational,” he concludes. “It was bigger and more expansive and a little more complicated than any we’ve done in the past. We had to set up the plumbing in different ways because it’s so big, and the water’s spilling from six or seven places on the back side of the waterfall.

“We got a real education in plumbing and setting boulders the right way for the water to flow.”