Story Of A Landscape: Prize-Winner A True Showcase For All Involved

Imagine being called to install a job that’s going to showcase hardscape products to homeowners all over your area. Then, imagine being able to use the best and the newest from two major hardscape-material providers to do the work.

Scott Gifford, owner of Cincinnati-based Outside Insight LLC, doesn’t have to imagine it. And, as icing on the cake, the project — done for Semco Outdoor Landscaping and Natural Stone Supply with the aid of Belgard and Unilock — was honored at Hardscape North America for its use of a combination of hardscape products in a commercial project of less than 20,000 square feet. 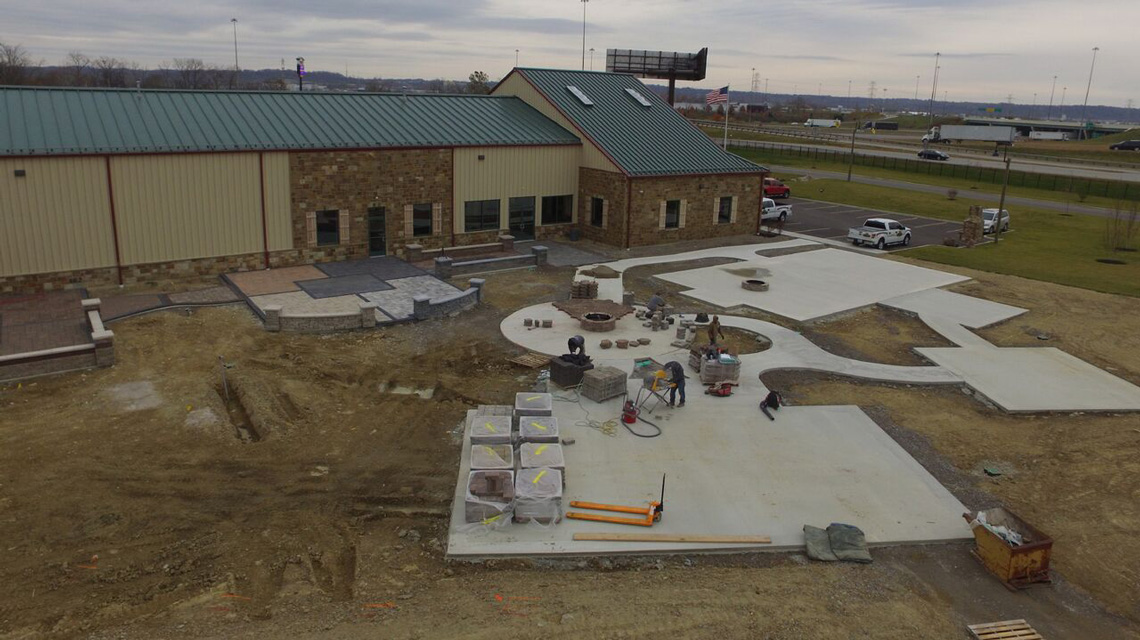 Gifford explains that the owner of Semco decided to put in an outdoor display to feature the materials of both hardscape manufacturers and got buy in from the duo.

“The design teams at the two companies came up with layouts, and lists of materials that would be installed,” Gifford says. “We were contracted independently through both to install their portions of the displays.” 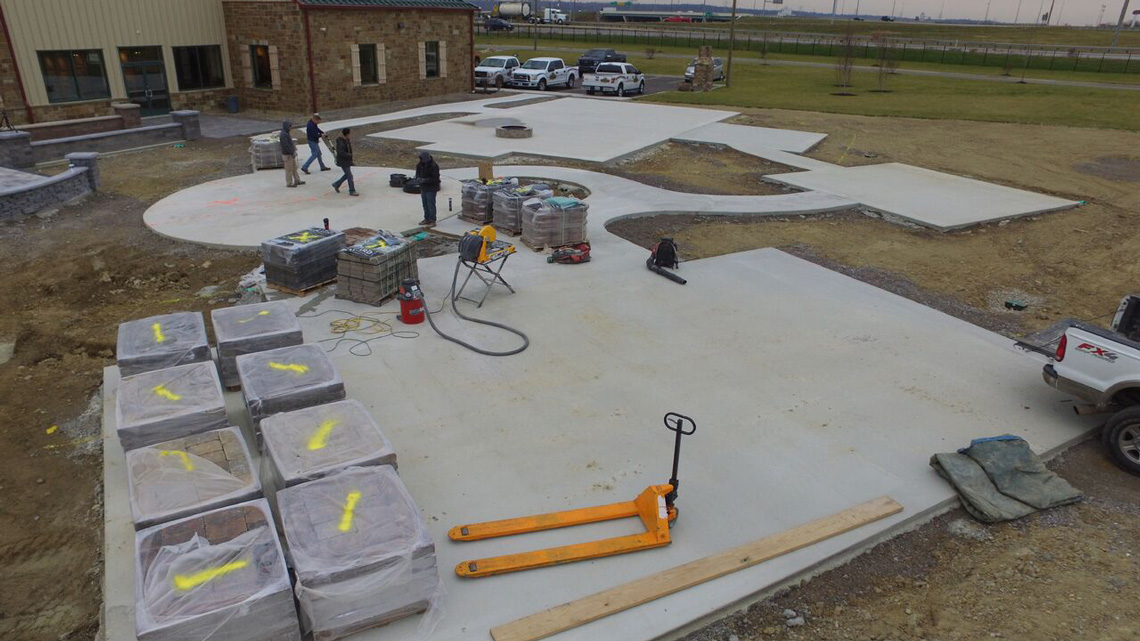 He adds that he has “great rapport” with the Semco owner, but the two jobs were both bid, and there was some negotiation involved. Gifford also has some 23 years of experience in the business and is ICPI- (Interlocking Concrete Pavement Institute) certified. 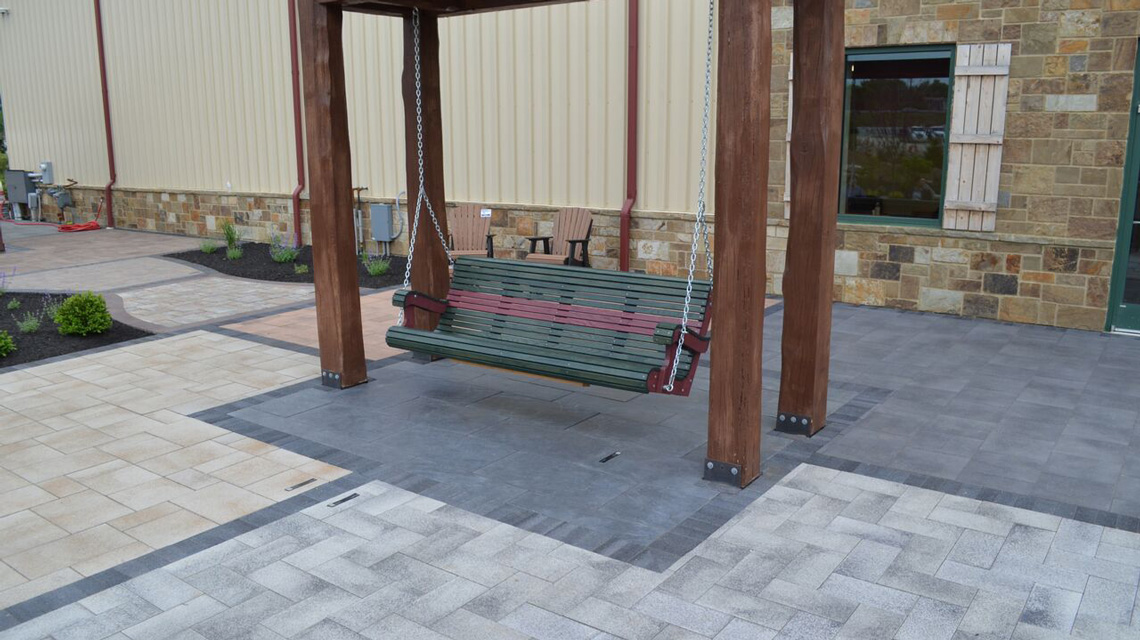 Still, this was far from being a typical job. For one thing, the owner of Semco had graded the area adjacent to the building and installed a concrete pad, so there was no site preparation involved.

“We just capped all the material on top of it,” Gifford says. “That way it’s easy to pull up and replace when a new product comes in or something is discontinued.” 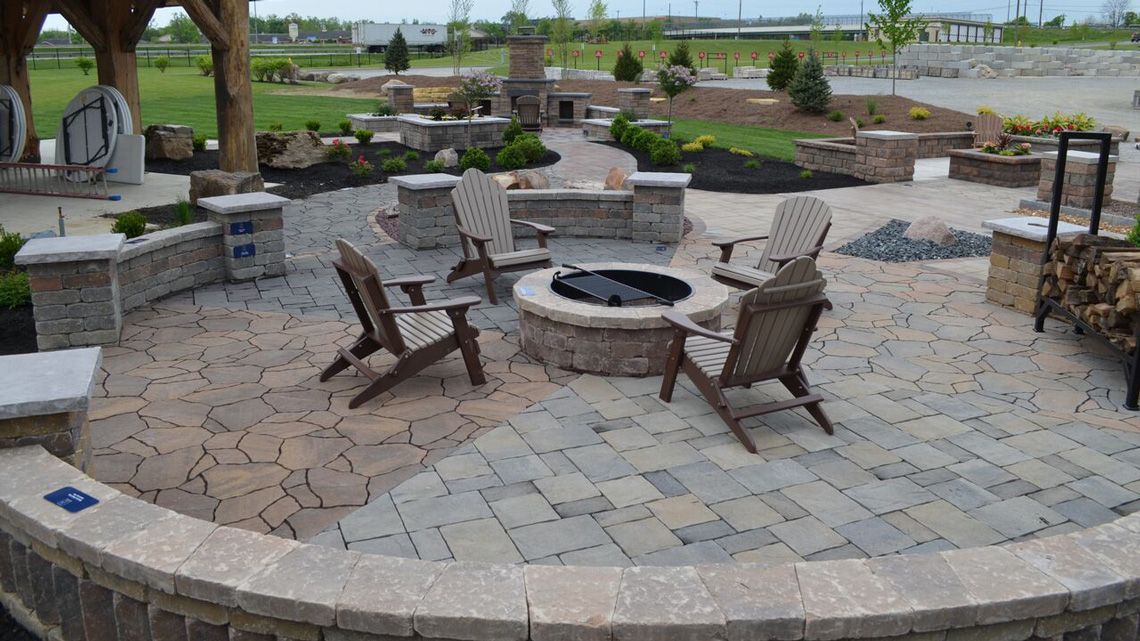 Consequently, he says his job was mainly to follow the plans and “fit things in,” although that proved to be an educational experience at times.

“Even in an ideal world, there’s just no way we could install all the materials from even one paving company,” he observes. “There were some materials that we hadn’t touched before. Some of it was new, which was good for us, too. We’ve since done installs where we worked with materials we had installed on the display, and that made it a little easier for us.” 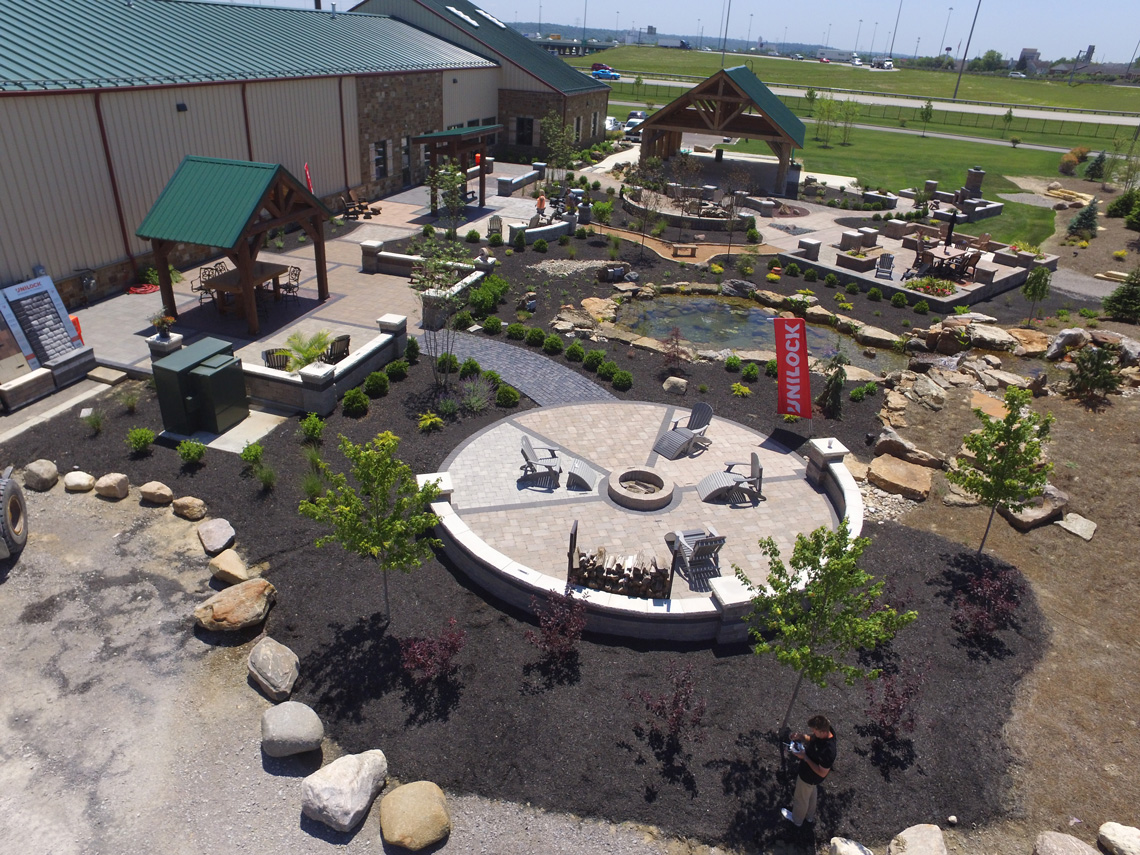 The list of items Gifford and his eight-man crew were called on to build covers pretty much the major backyard wishes of most homeowners, including multiple patios with seating walls, pathways, a water feature, fireplace and fire pit.

And, their presence at Semco is to help fuel the wishes and desires of backyard renovators, along with making it a convenient place to stop and shop.

“They’re really showing off the materials,” he says. “Homeowners can come, contactors can come, designers and architects can come there and meet their clients, walk around the displays, have discussions, pick materials and pick colors.” 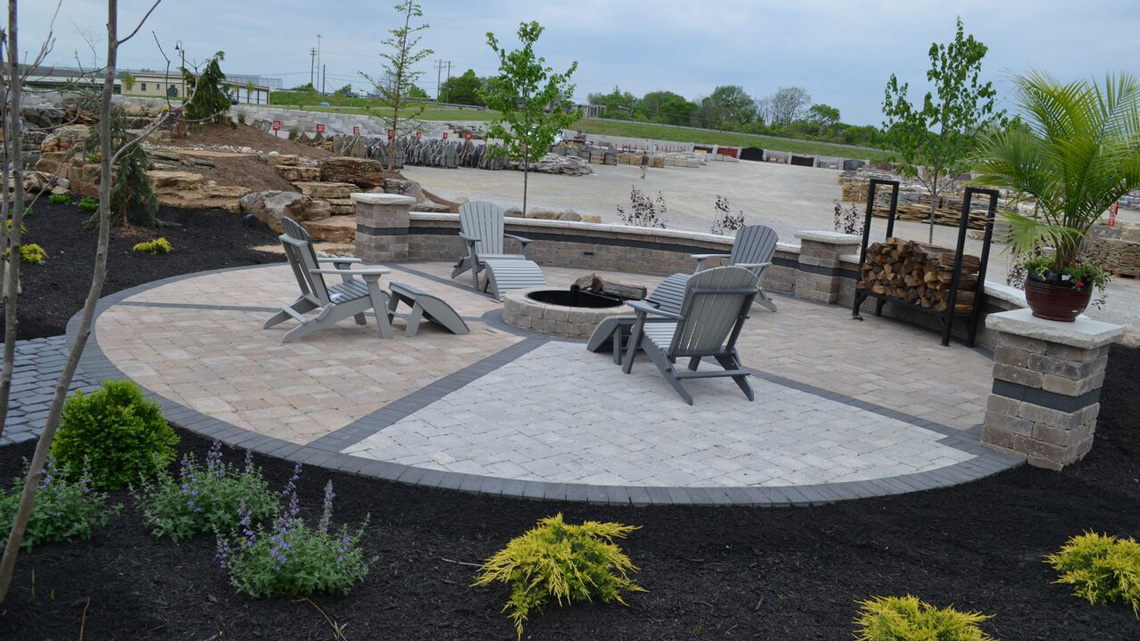 Gifford adds that Semco has an indoor meeting area for those people to get together and discuss their plans. And, while he did the installation, he sees it as a better way to do things than sending possible clients out to look at someone’s backyard.

“It’s not unusual for them to come back and say, ‘We like it, but we don’t like the color,’” he says. “At Semco, we can work out that detail because the colors and layouts are there, and you can see them in real scenarios, rather than dropping off some color swatches at the front door.” 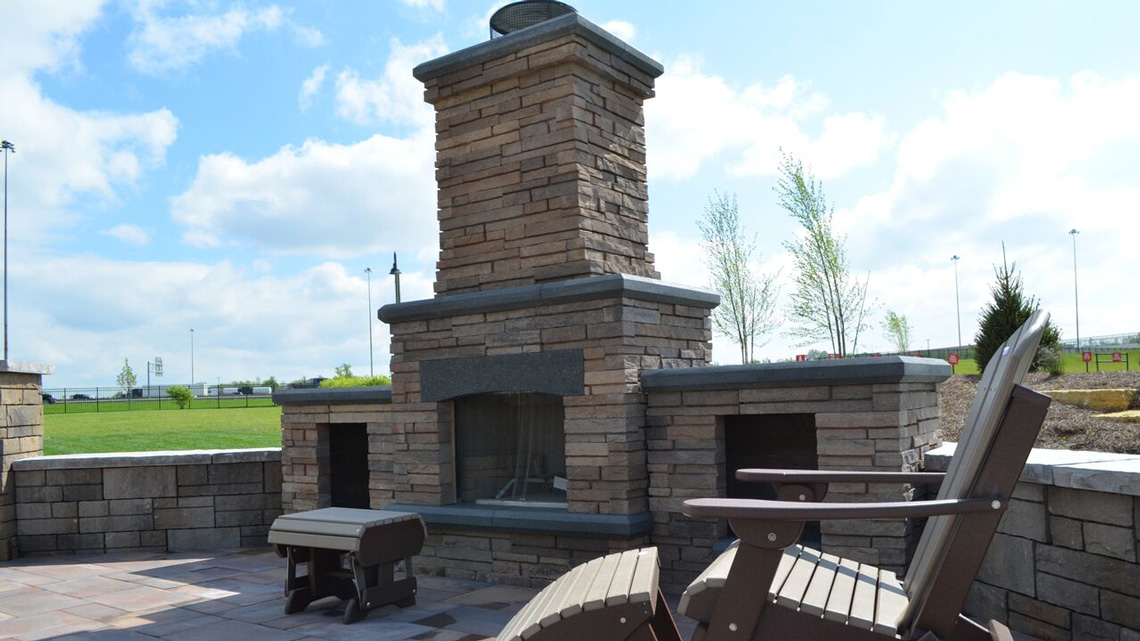 The project also incorporates landscape material and lighting, although to spread some of the work to others Semco had those elements installed by different landscape companies.

Even so, this was not an easy project, Gifford stresses. His crew spent 1,400 hours at the site, and things didn’t always go smoothly as designers for the two suppliers changed both design elements and material during construction.

Still, that wasn’t the biggest challenge the job presented. 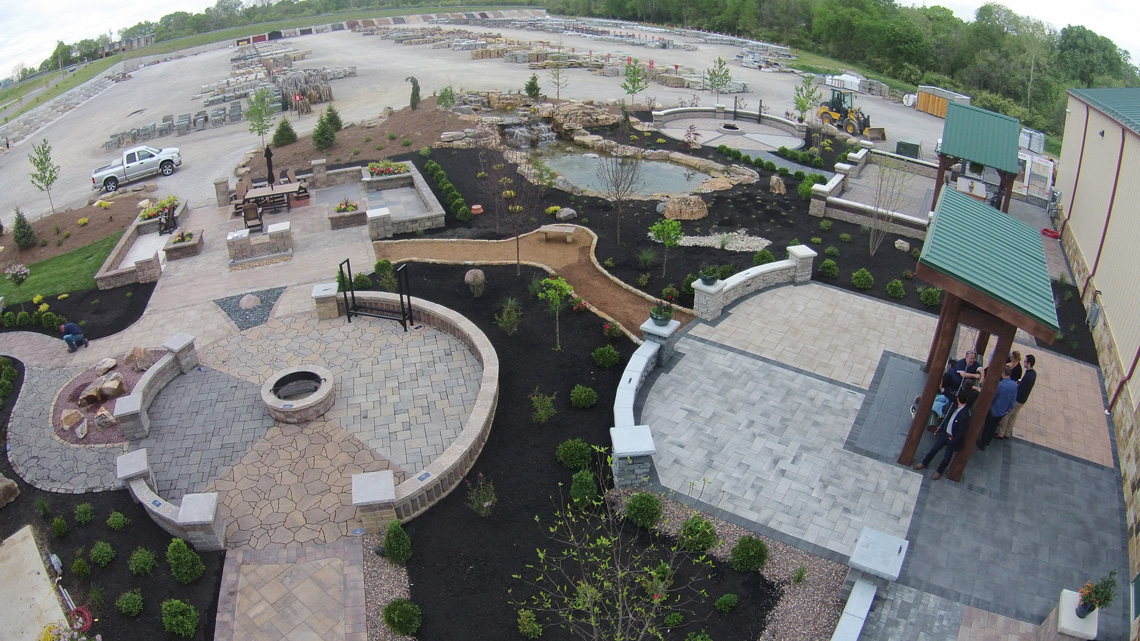 “Getting the materials adjacent to the different areas of the project was a challenge in the larger spread-out area,” he says. “We also had to learn about some products we hadn’t utilized before.”

The upside of that, of course, is that the Outside Insight crew got a head-start on its competitors in terms of learning how best to install those new products. That, and the $45,000 project has really allowed the company to showcase its skills. 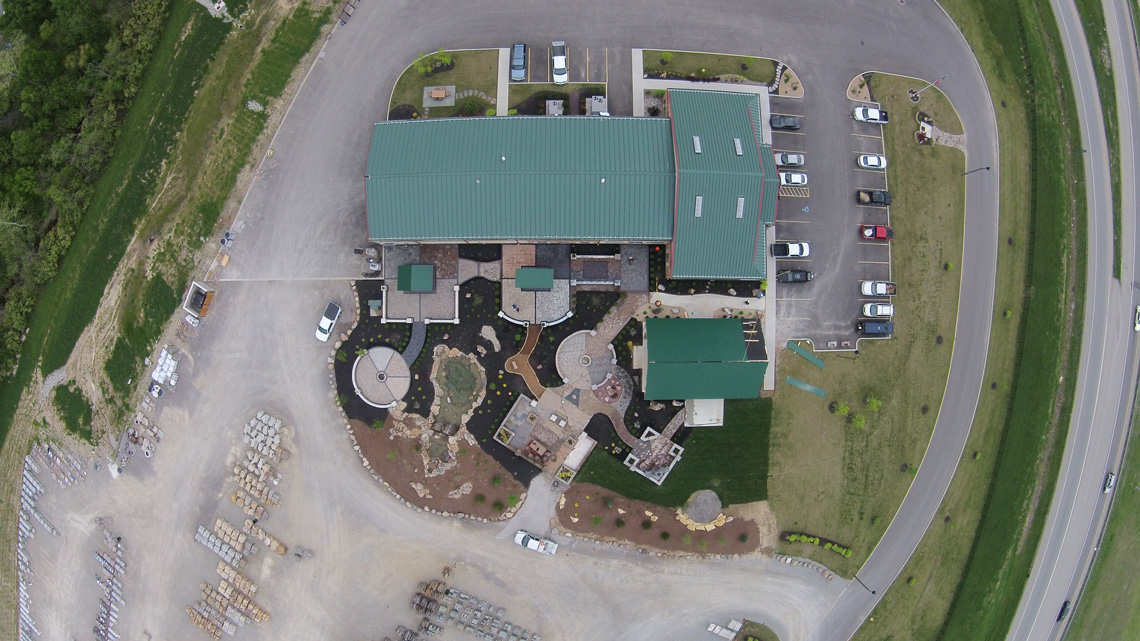 “We’re particularly proud of how the extensive layout allows us to refer clients to choose materials by observation,” Gifford says. “And, it also shows our customers our ability to implement these plans.”

While he’s not sure how long the displays will remain in place, for now, he’s happy to continue referring his customers to Semco for choosing products and in turn the company recommends prospective customers to him, Gifford says. 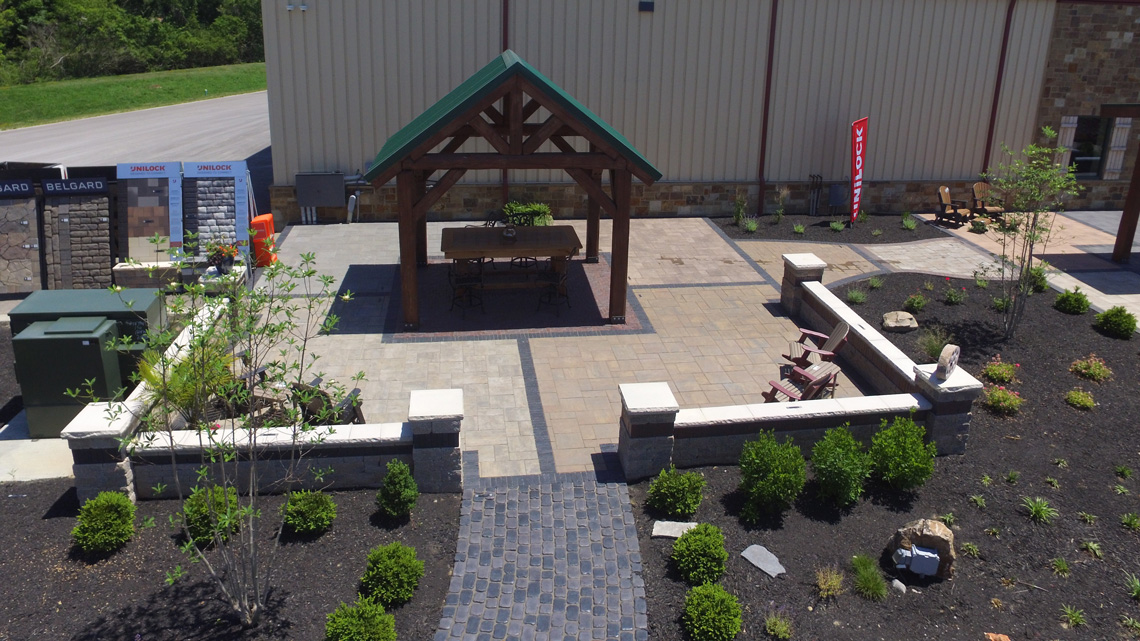 As for the award, Gifford says he’s a bit surprised, mainly because he had entered another job that had made the Belgard catalog, and which he assumed would be an award-winner.

“When that one didn’t make it, I was a bit disappointed,” he concludes. “But, I was pleasantly surprised to be a part of such a prestigious award.”