Team effort combines elements in a small space for a successful hardscape install.

Just as with homeowners, businesses sometimes feel the need to expand into the great outdoors. When the Blue Bell Country Club started considering such a move, officers found they had an extra club in the bag with Brian Stover.

Stover is not only a member, but he’s also a landscape designer and the owner of FS Landscaping Contractors, Inc., and Tru-Scapes Landscape Lighting in nearby Doylestown, Pennsylvania.

“The general manager asked me to design an outdoor living area for the members to sit outside,” Stover explains. “They were thinking about a fire pit, so, I designed a patio and fire pit using Belgard Products, and then I also integrated a Trex Deck cantilevered out over a pond to view the fountain.” 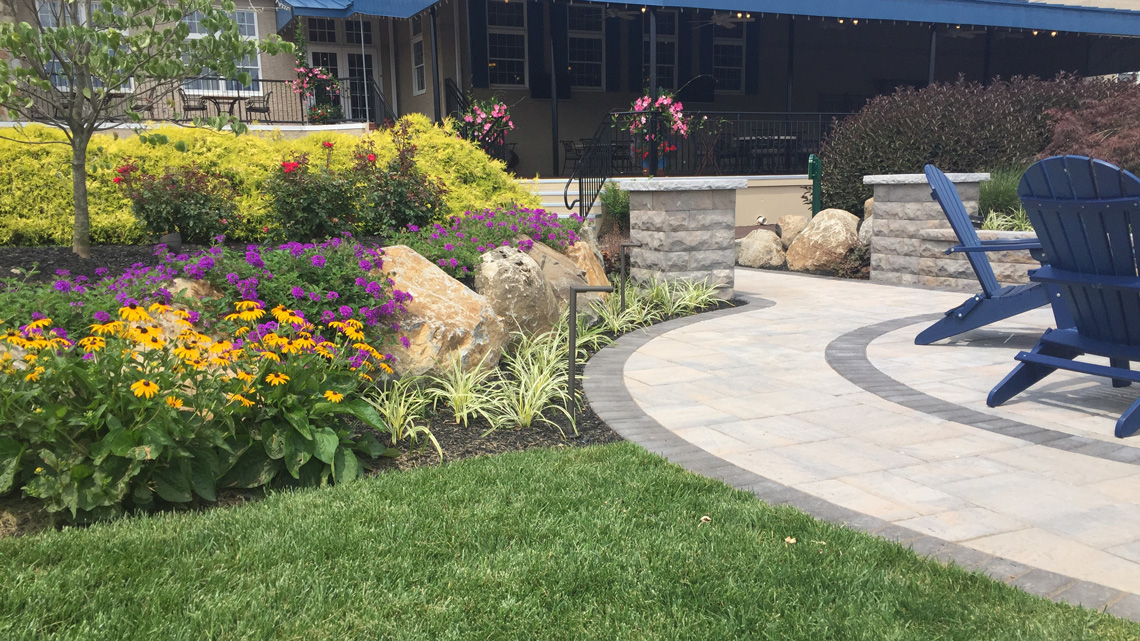 Stover went with quality over quantity with his design. What he describes as “a stone patio walkway” is only about 300 square feet, but it supports a 36-inch gas-supplied fire pit and features both Adirondack chairs and a seating wall made from Belgard’s Belair wall product.

It also carries visitors out to the approximately 120-square-foot Trex deck. 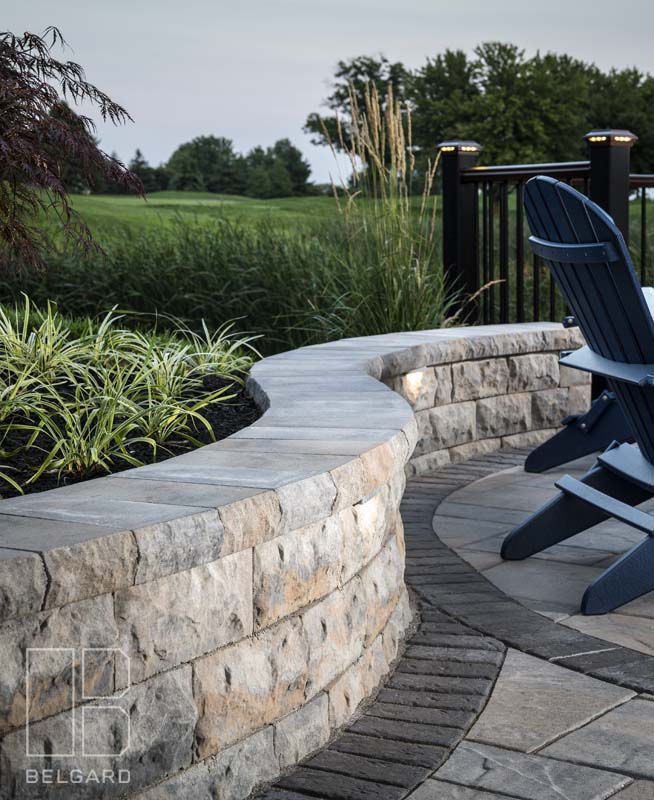 “We had Amazing Decks out of Ambler, Pennsylvania, come in,” Stover says. “They specialize in curving deck railings and deck boards, and we did a custom curved deck where the front-end curves out over the pond.”

Not only is the look attractive, he feels, but because the pond’s embankment falls away at that point, it was the best option to extend the usable area.

However, excavating for the project proved to be its biggest challenge. 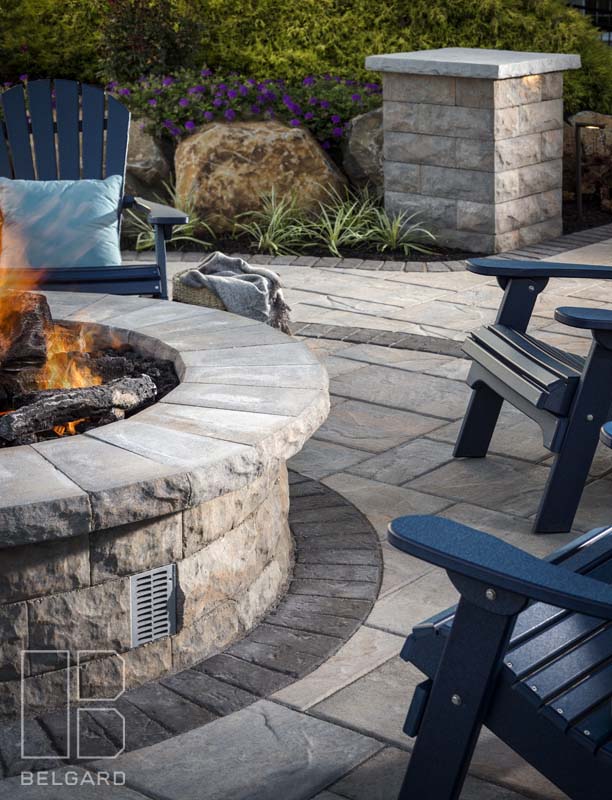 “We had to make it ADA- [Americans with Disabilities Act] compliant,” Stover notes. “We were working with a little bit of a hillside, and we needed to cut into that to make it level. There was some challenge to the topography, but being a commercial property we had to make sure we followed ADA.”

Thanks to the seating wall and the deck extension, Stover estimates the addition can easily accommodate 15 people.

Stover’s particularly pleased with the fire pit, and not just because he says working with the Blue Bell team and his own crew enabled them to run just the right amount of gas out to the fire pit to create a great flame. 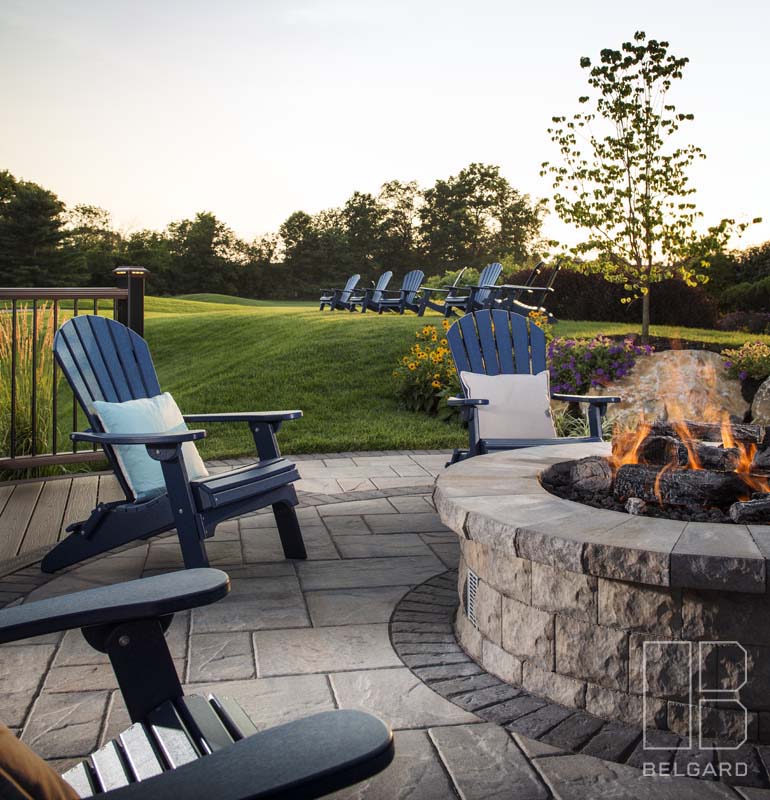 “My team custom-cut the Belair Wall product to veneer the fire pit, and that really makes it sparkle,” he says. “It also has encouraged Belgard to potentially make a fire pit kit out of their Belair wall product.”

And, to make sure it meets the club’s need to retain late visitors, the project is amply lit by Tru-Scapes Landscape Lighting products, including hardscape wall lights as part of the seating wall, up-lighting for nearby trees, path-lighting along the walkway, and Tru-Scape post cap lights on the deck posts.

The project also didn’t stint on the softscape. Where the pond embankment had been disturbed, Stover worked in some boulders, and then planted Purple Verbena to cascade over them. While the newly planted area includes both spring and fall color, he says the greatest emphasis was on summer color because that’s when the country club sees the most visitors. 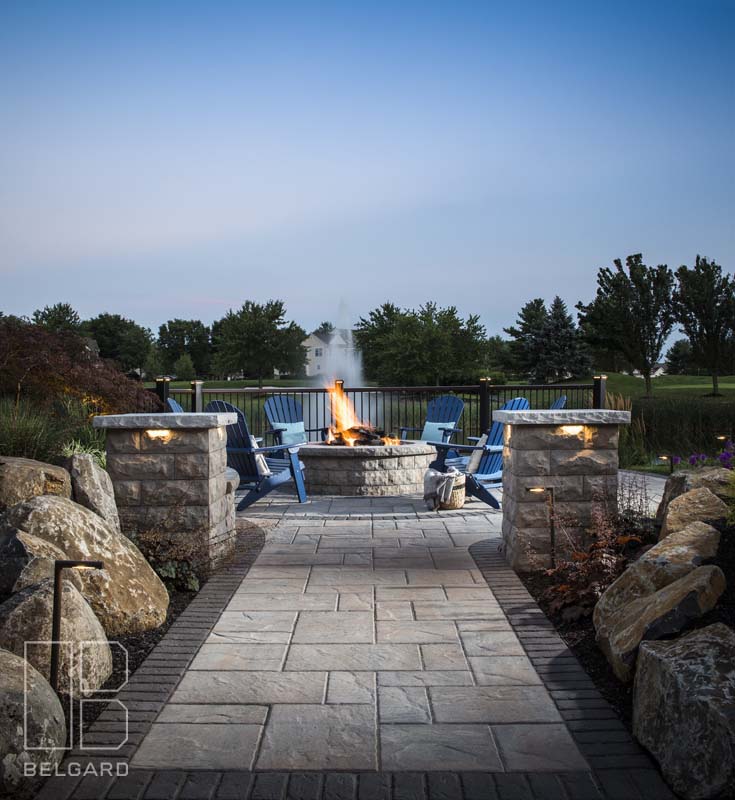 “Summer colors include Black-eyed Susans and the Verbena,” he says. “Some of it was creating balance with focal points. For instance, there’s a Japanese Maple to the left of the patio and a Pink Dogwood to the right. Not only does it create a nice balance with the plant material during the day, but when you’re putting lights on it, you have balance, as well.”

Actual construction of the project took less than three weeks utilizing FS Landscaping crews, but Stover says putting together the team to do the project — and figure out its financing — not only took longer, but was a real learning experience.

Stover explains that originally the country club had a smaller budget worked out for the project. 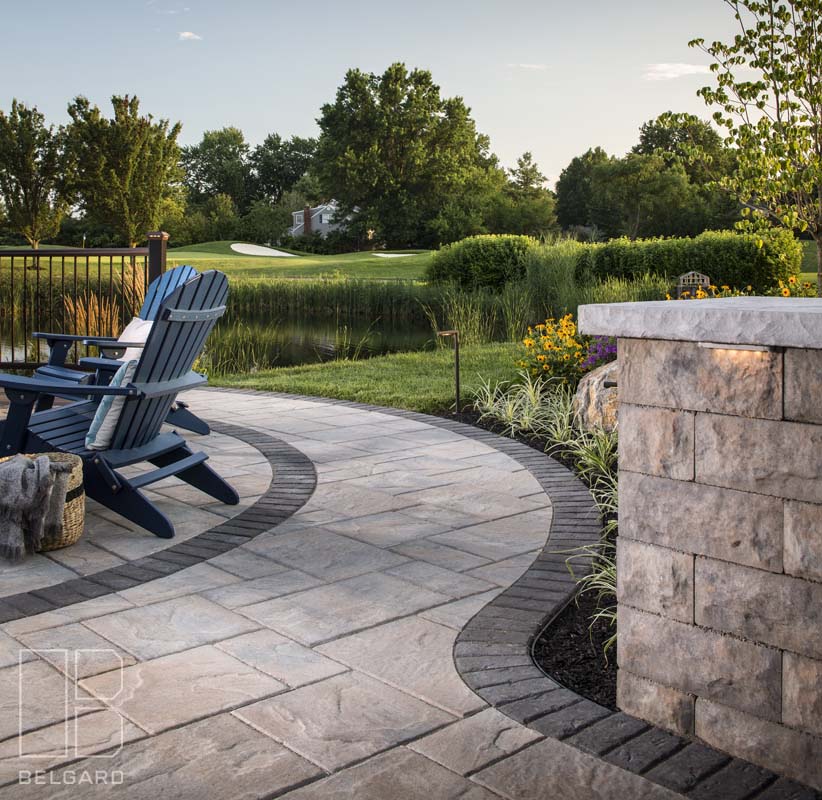 “When they saw the design, they really wanted it, and so I said, ‘I’d rather build this than the smaller version that fits your budget,’” he says. “I worked out several deals with the team, and I worked out a deal with the country club where I now have a membership there for life. I figured I’d rather go big and work out the other stuff.”

The key, he says, turned out to be a good bit of networking.

“Putting the team together, Blue Bell Country Club and Belgard Pavers, Trex Decking, Amazing Decks, FS Landscaping, Tru-Scapes Landscape Lighting and Froehlich’s Farm & Garden (of Furlong, Pennsylvania, who provided the plants), was just awesome,” Stover says. “I learned that putting a team together and having a success project like this goes a long way.”

And, the project is a success no matter how you look at it. Not only did it win awards from Hardscape North America and the North American Deck and Rail Association, but it’s achieved the country club’s goal of keeping people there into the evenings. 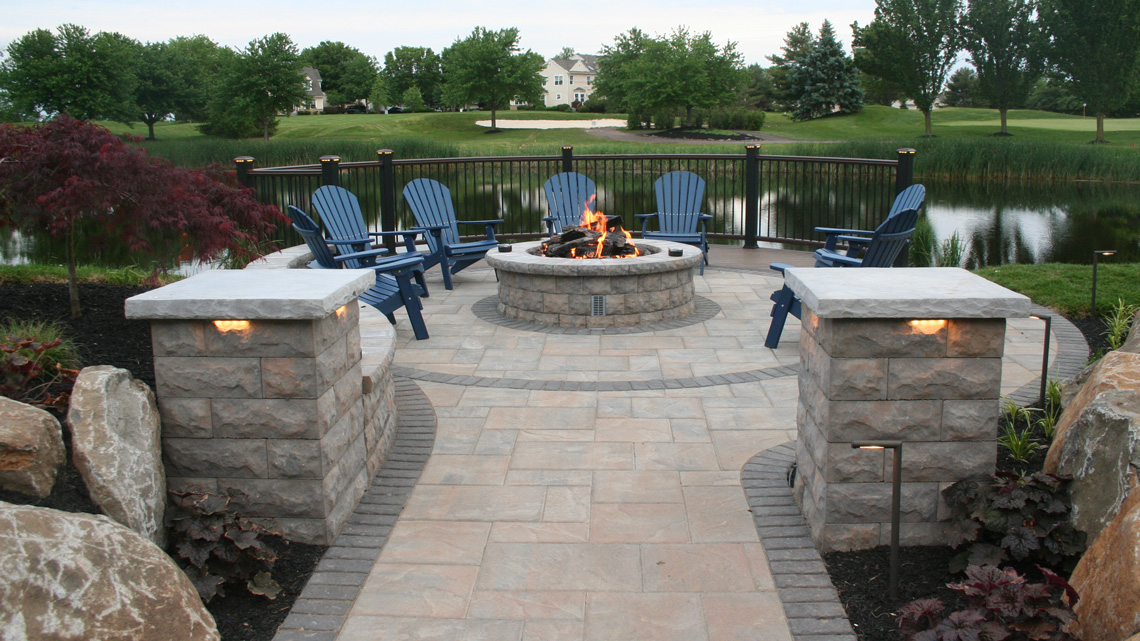 “Over the summer they did a wine-and-cheese event, they did a beer-tasting event and they’ve put live music out on the deck,” Stover says. “It’s definitely become a feature, and the ambiance is fantastic.”

Just receiving compliments from his fellow members and seeing how much they’re enjoying the space is one reason Stover is proud of the project. However, he’s also pleased with how well the job turned out.