Think having a reputation for creating prize-winning hardscapes doesn’t mean much? Jim and Justin Hampton, the father-son partners in Omaha, Nebraska-based Paver Designs LLC, will likely tell you otherwise.

The two men have become regular winners in the Hardscape North America competitions, and clients have begun seeking them out just for that reason. That’s the story behind their latest winner, for a residential concrete paver project of less than 3,000 square feet.

“A few years back, we won an HNA award for a project we had done for some people who are good friends of these clients,” Justin Hampton says. “They called and said they wanted to do a big project and they wanted something that could possibly win one of the awards. 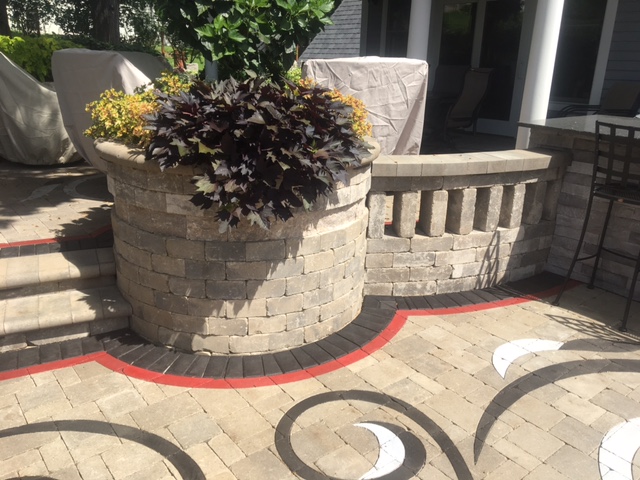 Hampton explains that the Foutches had bought a late 19th-century home in Logan, Iowa, which is less than an hour’s drive north of Omaha. After spending several years restoring it both inside and out, they were ready to take on the backyard.

“All it had on the back was a little 10 foot by 10 foot wood deck that was falling apart,” he says. “They decided they were at a place to have people over and have big parties, so they were looking for a larger outdoor space.” 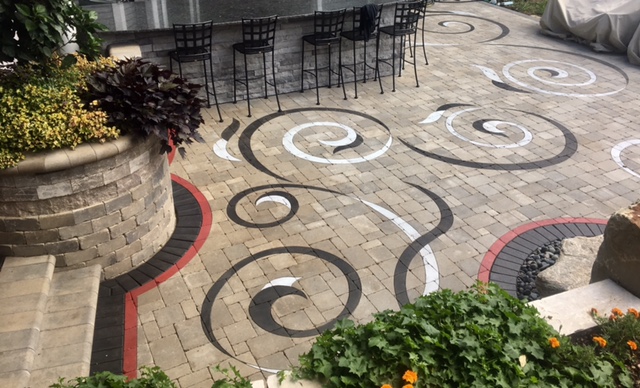 One immediate problem was that there really wasn’t a lot of backyard space in which to work. The lot is a sloping one, and at some point, someone had graded the first approximately 12 feet flat, and then put in a retaining wall.

“We tore out the existing wall and then went into the bank,” says Hampton. “We went out about another 20 feet, and then built some new retaining walls.”

He estimates Paver Designs removed about 10 dump-truck loads of dirt from the backyard, using it to do some grading at a rental house the clients own across the street, and having the rest hauled away by a local farmer. 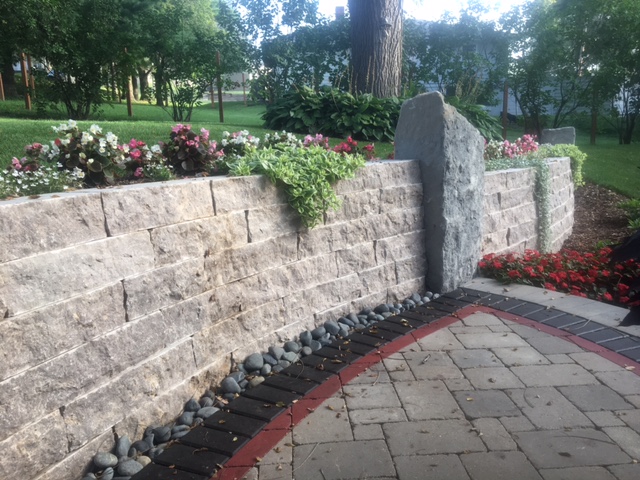 The company then installed a new retaining wall.

“They had a type of marble brought in for the wall,” Hampton says. “They also wanted a fire feature of some sort, but they wanted something a little different. We cored out a big granite boulder for a fire pit, and then built a reflection wall with a pebbled mosaic design behind it. When the fire pit is on, it reflects off the wall and gives a pretty cool effect.”

As a final touch, the Hamptons threw in a surprise for the clients, who have several sun-faced items in and around their home.

“We took a piece of limestone and carved it by hand and set it into the mosaic,” Justin Hampton says. “We didn’t tell them we were going to do it; we just threw it in there and hoped they liked it, and they did.” 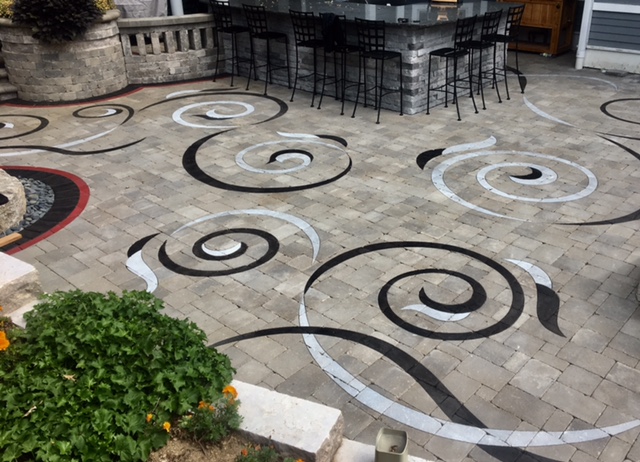 It’s the fire feature that is Hampton’s favorite part of the job, and the one of which he’s most proud. He says a lot of that has to do with it being new and different, as well as a learning experience.

“It was out of the box for us,” he says. “They didn’t want a typical fireplace or fire pit; they wanted it to be a focal point and somewhat artsy. The pebble mosaic and the reflection wall behind it is something we’d never done, and it turned out pretty cool. Now, we’re getting requests for them with upcoming projects.”

Certainly, the second focal point of the project is the large outdoor kitchen. The patio is done in three levels, with one on the same level as the rear door to the house. A second level goes up two steps to the upper patio, and at the far side, two steps go down to another level and a sidewalk that goes around the side of the house. 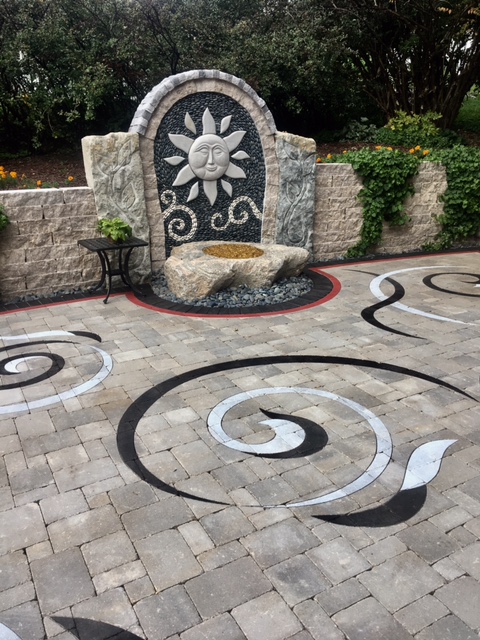 “The kitchen is on the lower level,” Hampton explains. “That’s the largest area and the kitchen is so big that was the only feasible place to put it where it wasn’t going to take up a whole section of the patio.”

The cooking area includes a grill, pizza oven, rotisserie, refrigerator and wine cooler. And, on the other side is seating for 10.

“It’s concrete block which is then veneered,” Hampton says. “There are granite countertops, and the whole back side of the grill island serves as an outside bar and seating area.”

Although a little cove area contains an outdoor television, two future components for the patio have not yet been installed. One is a pergola to shade the outdoor kitchen, and the other is a hot tub.

“We don’t do framing, but the patio is set up to put a pergola in,” says Hampton. “I believe they’re going to be doing that in the spring.”

He describes the future hot tub area as being off to one side of the patio, and somewhat secluded, although it can be accessed from the side of the house, as well.

“The plumbing is already installed and they just have to take a hot tub and place it there when they’re ready,” he says.

The entire 2,700 square feet is done in sand-set Belgard pavers, and incorporates seating walls, except around the firepit where chairs are placed, and the area near the backdoor, which has a patio table and chairs. 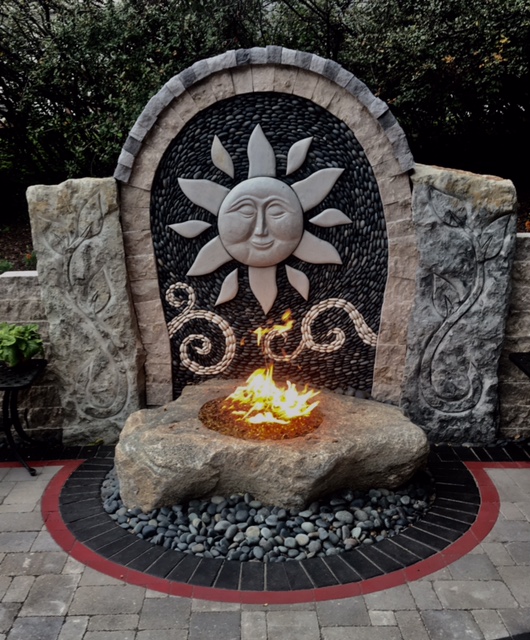 Lighting for the project is all LED, with a heavy use of ledge lights, including under the steps and the seat walls, as well as in the grill island.

“We also have about a dozen up-lights that reflect areas on the wall we wanted to highlight, including the fire feature,” Hampton says.

With so much of the backyard in pavers, drainage presented the project’s biggest challenge, especially since very little of it naturally drained toward the yard.

“We use little landscape cutouts that hide drains,” he says. “We set everything up so it flows toward the drains, and then the runoff is piped to the front of the house.”

He calls that “the most complicated part of the job, and the least fun.”

The approximately $130,000 job took roughly six weeks, and while that doesn’t seem overly long, Hampton says this was a job that taught him the importance of patience.

“This was one of our trickier jobs to lay out, just because of the way it was set up and the access,” Hampton concludes. “We just had to take our time, make sure everything was flowing the right way, and the elevations were correct. Even with the inlay, we spent quite a bit of time marking it out and remarking it, so we had something that flowed together and looked nice.”