Get inspired by these award-winning hardscape projects.

If you’re looking for hardscape inspiration, look no further. These are some of the most unique projects we’ve covered in Turf that have not only won awards but also met environmental requirements — and made the clients happy. 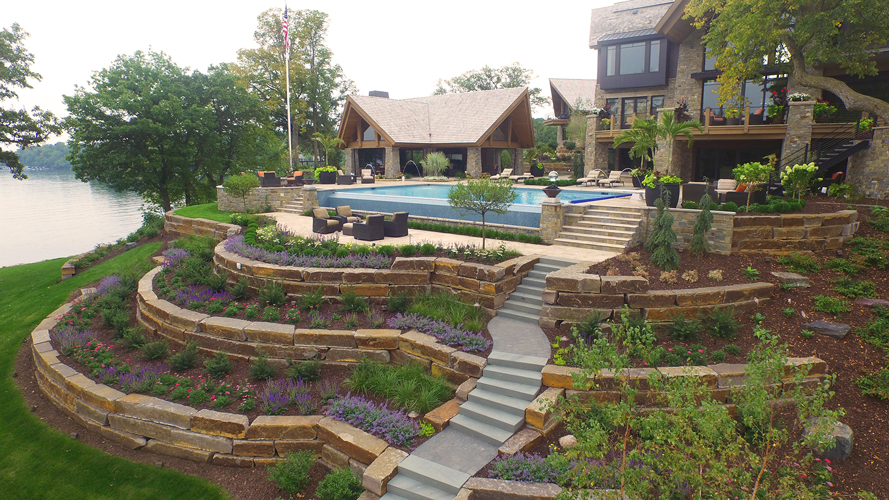 At this Minnesota project, there’s about a 25-foot grade change between the lakefront and the pool terrace level. Mom’s Landscaping & Design brought in more than 1,000 tons of ledgestone for the terracing. It’s a limestone with a weathered edge. The redesigned lakefront landscape includes a butterfly garden, an outdoor kitchen, two unique water features, a fireplace in the cabana and two fire pits, including one at the end of the pool. 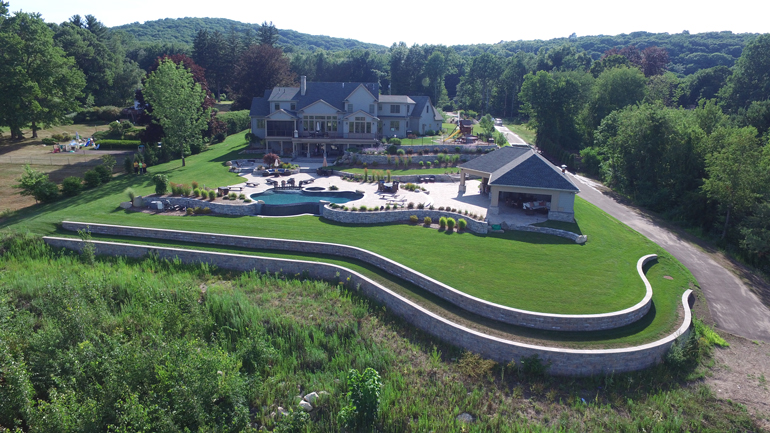 These Massachusetts clients were building a home on a 15-acre site and Bahler Brothers Inc. spent two years creating an award-winning landscape. Along with massive retaining walls, the project incorporates more than 7,000 square feet of pavers. The elevation of the property turned out to be the most challenging when incorporating the retaining walls and a pool that features a vanishing edge. 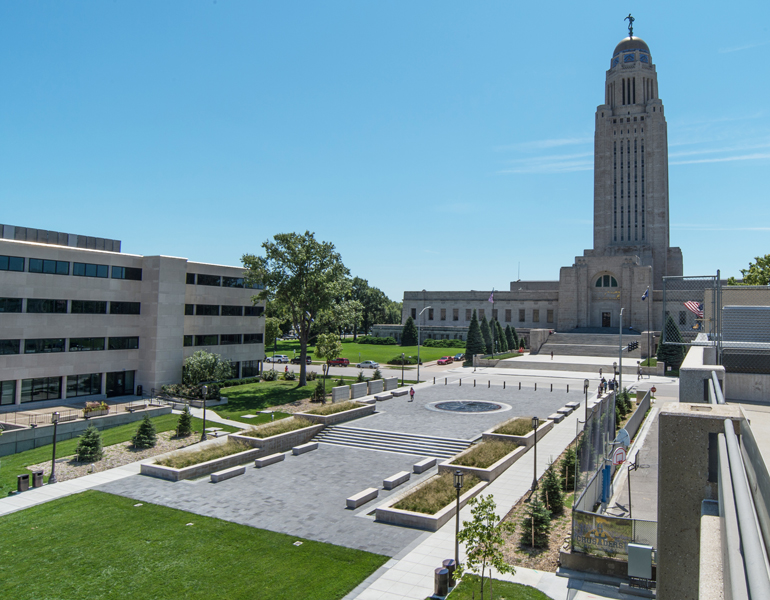 Located between the Nebraska Capitol building and the University of Nebraska campus in downtown Lincoln, Dreamscapes Inc. took on this commercial hardscape project that lasted over two years. The mall, which runs for five city blocks, was originally constructed in honor of the state’s 1967 centennial. The biggest portion of Dreamscape’s part of the project involves an approximately 8,000-square-foot map of Nebraska located in front of a state building.

This $600,000-$700,000 residential project includes a built-in television, outdoor kitchen, fireplace and pizza oven, as well as an infrared heating system and ceiling fans, all under the cover of a custom-made shade structure. And, off the upper patio is a bocce court. The project required site preparation involving heavy equipment and good engineering practices because the dramatic elevation change between the two outdoor living spaces was difficult to retain. It took a lot of compaction to mitigate potential settling and a large part of the backyard ended up having a new irrigation system and new sod installed. 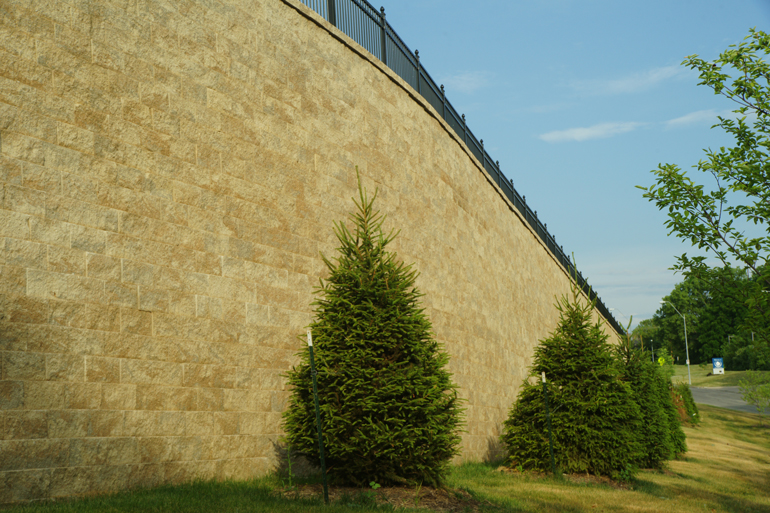 A high school in Kansas City, Missouri was getting a new soccer stadium and Lewis Block & Supply was hired to install its surrounding retaining wall. Although the project began in December and winter weather caused delays, the approximately 18,000-square-foot project was completed within seven months. 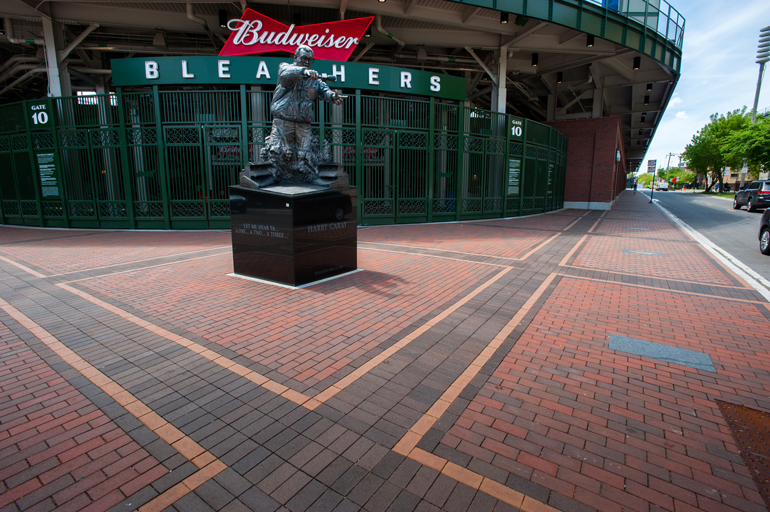 The biggest challenge of this paver renovation at Wrigley Field in Chicago was the layout. Almost half of the pavers used on the project are engraved and these engraved pavers were directed to be installed in the exact same location. The work of the project totaled $130,000 for the approximately 13,000 square feet of pavers — 6,000 of which were engraved. 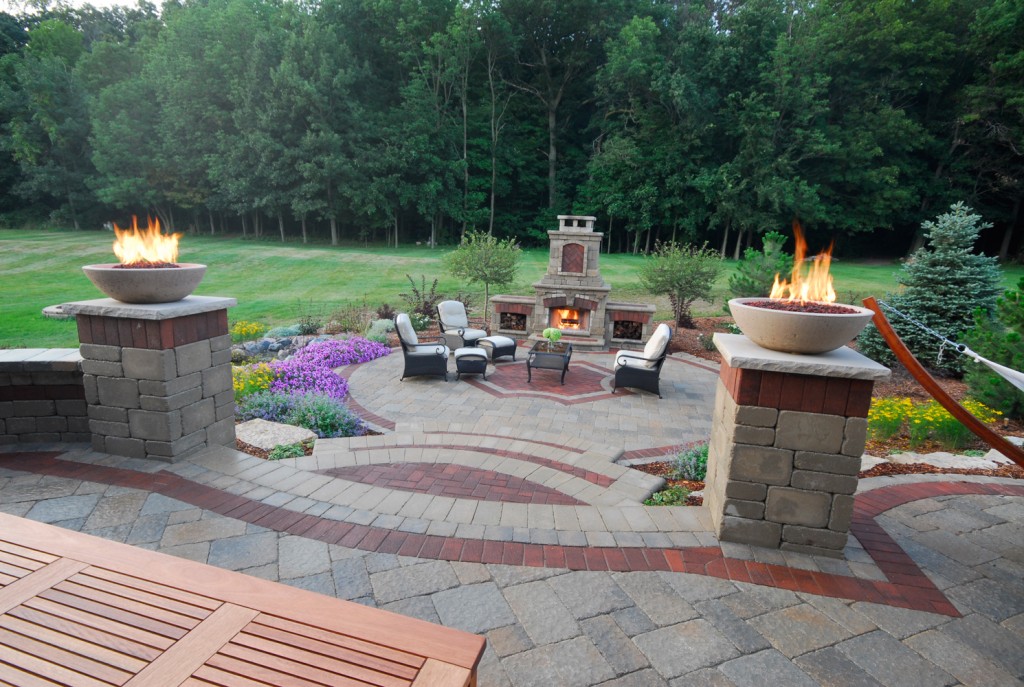 In Big Bend, Wisconsin, these clients were looking to Extreme Exteriors to create a space for entertainment, and due to the terrain around the house, it had to be multilevel. The design solution: an upper space off the rear of the home for the family, and then a lower level with grill and fireplace for larger gatherings. The client had an idea in mind about the staircase that she wanted that was half-round with angles. With the roundness of the steps, Extreme Exteriors decided that a circular lower patio would look the best. 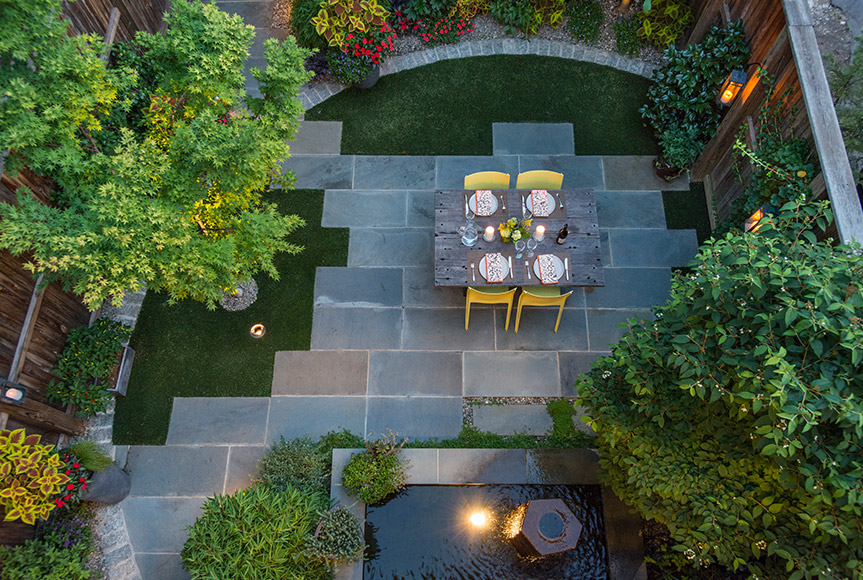 This recently renovated historic townhouse on a narrow lot needed a backyard update, too. The modern stone patio includes granite cobblestones that serve as boarder to the turf and Pennsylvania flagstones are concrete-set in a staggered pattern to suggest a loose sand-set pathway. Despite the small space, the client’s requested a water feature, which Botanical Decorators custom built with a hand-hewn granite plinth; the water feature can be seen from both the patio and the interior of the home. 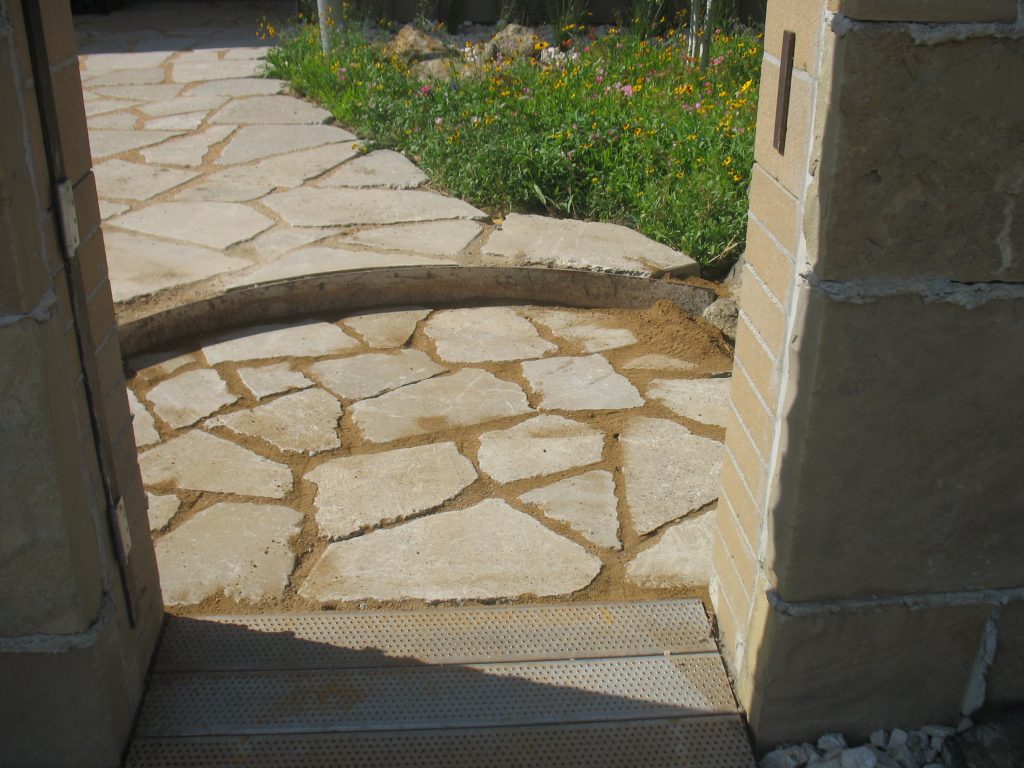 The pieces of recycled concrete had to be broken with a sledgehammer, then reassembled to give a flagstone appearance. PHOTO: River Ridge Landscape Co.

The enclosed patio at the Billing’s Public Library was completed in recycled concrete that was set in a sand bed. The pieces had to be broken with a sledgehammer, then reassembled to give a flagstone appearance. The installation contractor says the real challenge was getting the walkway level since each piece ranged in thickness from 4 to 6 inches. 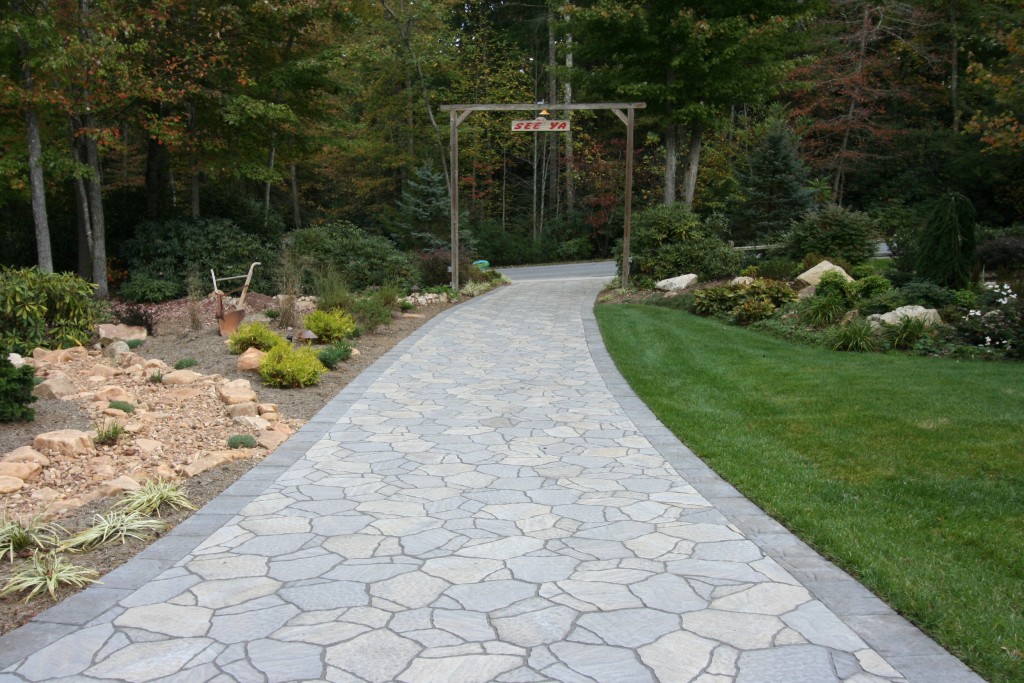 Mountain View Nursery and Landscaping installed this patio in Mountain View, Tennessee, using mega-arbel pavers, country manor walls and a general shale fireplace kit. The clients then decided to redo the entire driveway using their own blueprints for the work. Mountain View installed a small section of permeable pavers to catch any runoff from the driveway and keep it out of the barn connected to the patio. 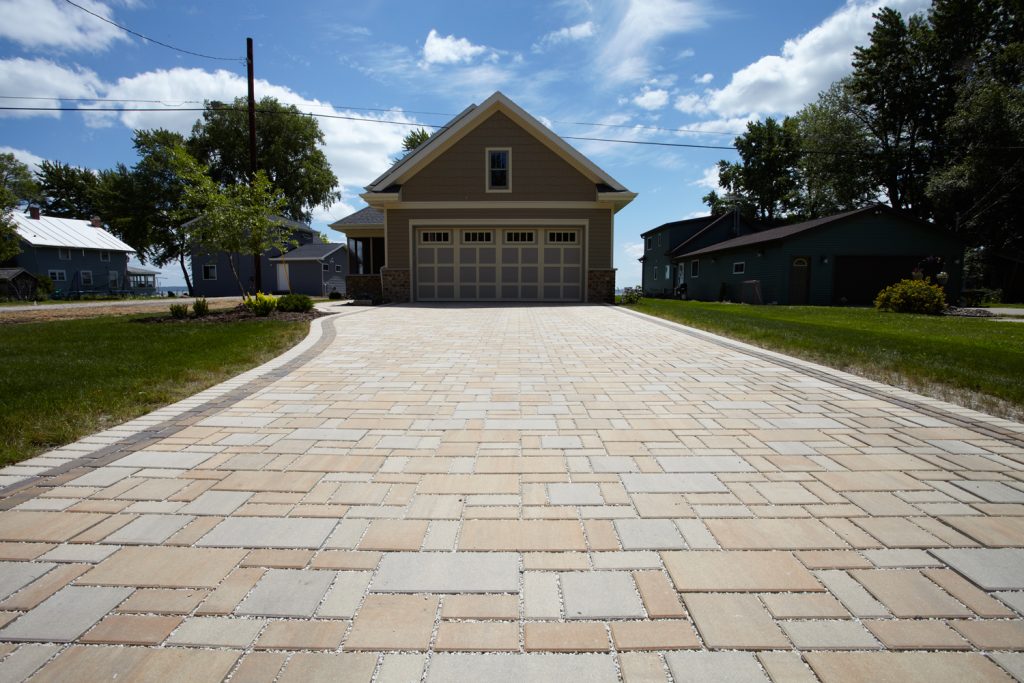 A home located right on Lake Winnebago in Wisconsin presented challenges in meeting Department of Natural Resources regulations governing waterfront development. Creative use of permeable materials resulted in an award-winning driveway design with a matching walkway that meets water quality standards while also having aesthetic value.

Next post Why the Battle for H-2B Will Intensify