These New Jersey client's were looking for a backyard that would get their family enjoying the outdoors.

For Dennis Shennard, owner of GroundMasters, Inc., in Hightstown, New Jersey, there’s a lot to like about a project he did for a family in nearby West Windsor.

Not only was he able to up-sell the clients well beyond the patio they’d first envisioned, but the project won an honorable mention from Hardscape North America in the category of porcelain — residential.

Shennard says he was initially contacted by the clients following a referral from one of his previous clients. That he’s been in business for 26 years and has a reputation for doing hardscapes didn’t hurt, either. 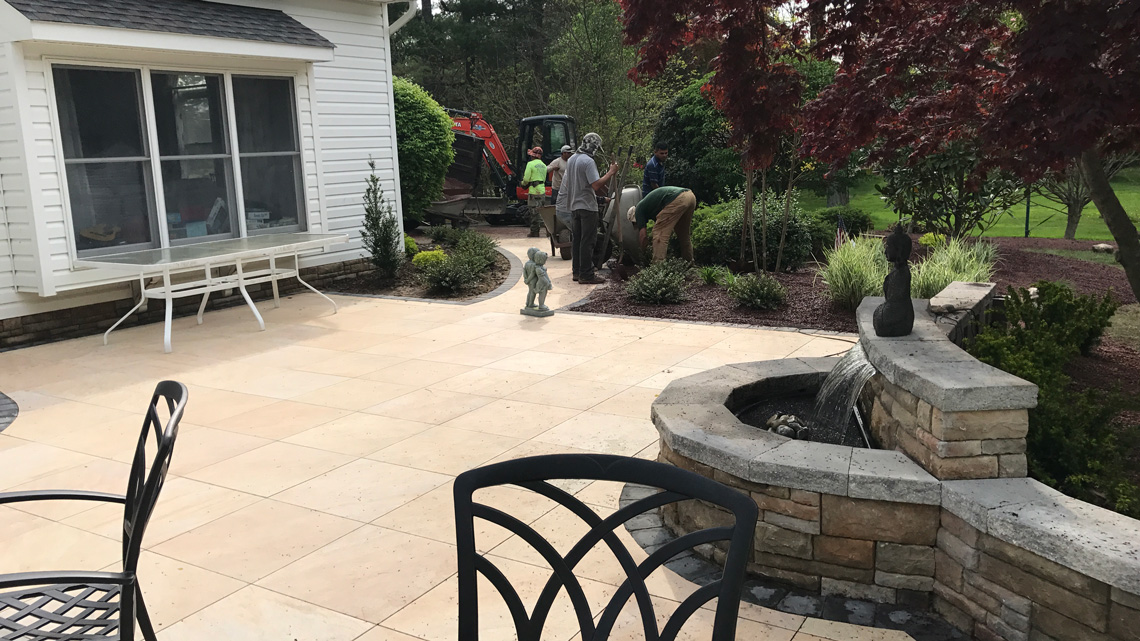 And, the clients’ wishes were initially simple: they wanted to do something with their backyard. He describes the lot as about a half-acre in a development, but off to one side, which made it a bit more private than others in the area.

“They had an existing patio that was small, and the landscaping was overgrown,” Shennard explains. “It was also settling. And they wanted to make it a little easier coming out the back door.”

Shennard began showing them examples of his work, and started talking about possibilities, including an outdoor kitchen, fire features, water features, and shade structures. Ultimately, they decided they wanted all those options. 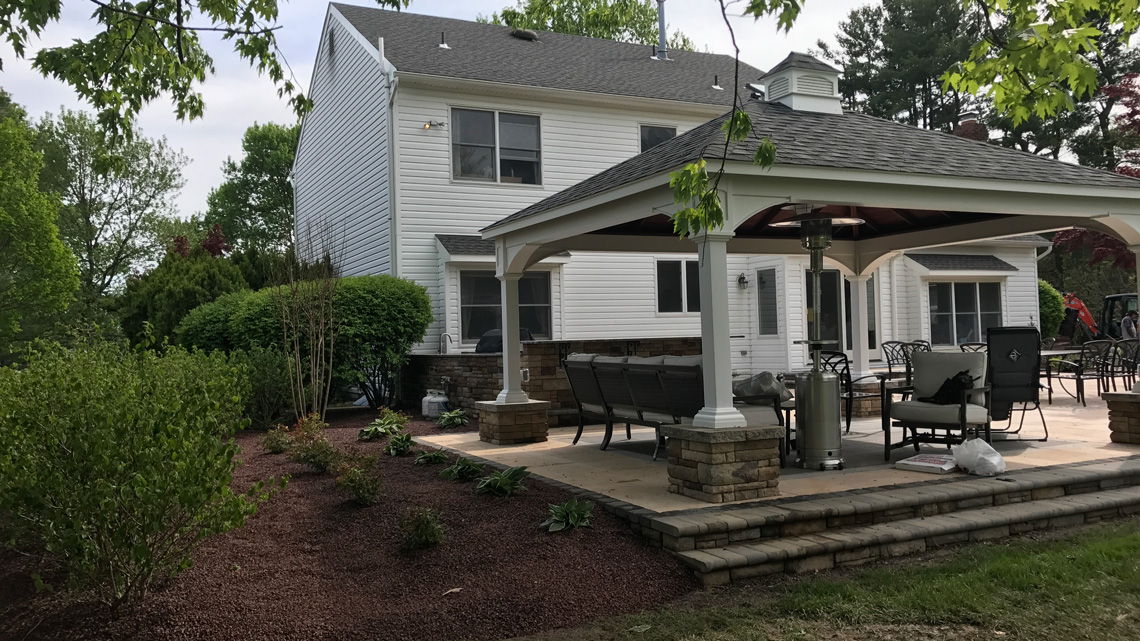 “The job was originally sold with EP Henry paver products,” Shennard says. “They were especially taken with the CSW (cast stone wall) block. It’s a new veneer-style wall that’s manufactured in-house and comes out in modular pieces, so it goes up very quickly compared with a masonry wall.”

And, then they visited GroundMasters’ shop; Shennard believes it might have been to sign some of the papers regarding permits for the job.

“I have porcelain on display outside my office,” he says. “They said, ‘What’s that?’ Since porcelain is typically a lot more expensive than pavers, I don’t necessarily push it. These people had a budget and we’d already added all these features; I was afraid they’d tell me to go away.” 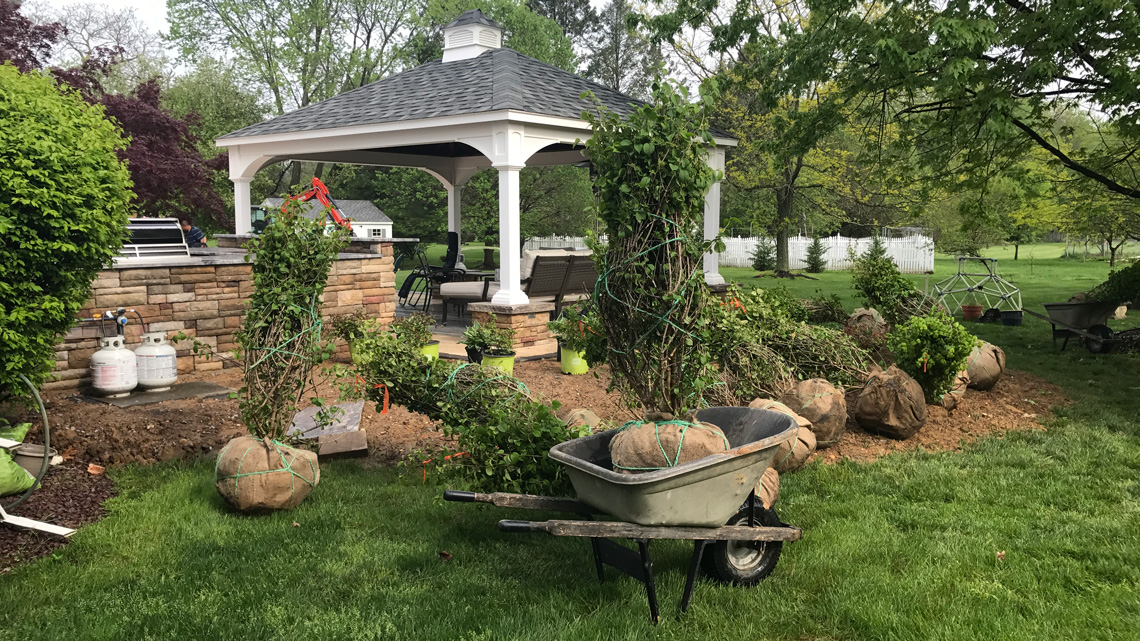 Instead, based on their enthusiasm, Shennard showed them a couple projects he had done with porcelain, and he said they were taken by the fact that it doesn’t absorb a lot of heat, doesn’t fade and isn’t slippery.

“I gave them a price for the upgrade to porcelain and they went with it,” he says, adding that what they had anticipated spending $30,000 on ended up topping the $100,000 mark.

Certainly, the approximately 2,000 square feet of Atlas Concorde USA porcelain pavers is the heart of the project. Shennard says the bulk of the work is in 2-foot by 2-foot tiles, but 8-inch by 48-inch planks help complete the original design. 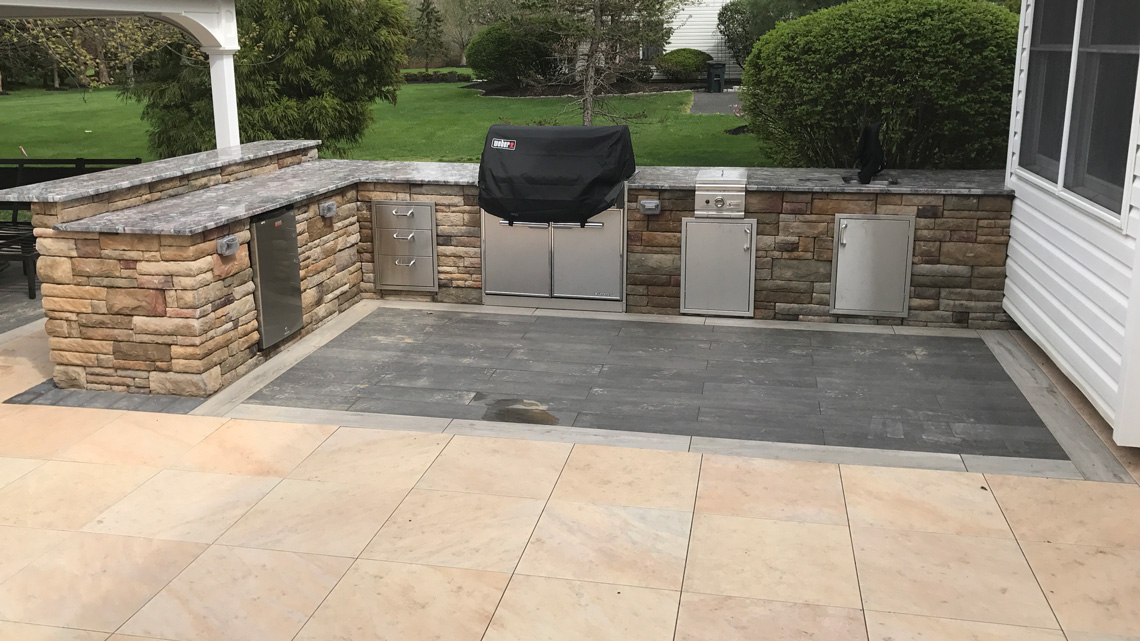 “Your minimum would be six inches of base, with an inch of sand for the bedding course, although this has more,” he says. “We used tile spacers when we put it together. Then, we jointed everything with an SEK SUREBOND polymeric sand. It holds up very well, especially with the porcelain.”

The reason for a thicker base is simple. From the foundation of the house the patio is on grade, but as it comes away from the home Shennard the lot drops slightly, to where the far edge is 12-14 inches off grade, requiring a set of steps to the lower level, which contains the fire pit.

Additionally, a porcelain walkway leads to the driveway. 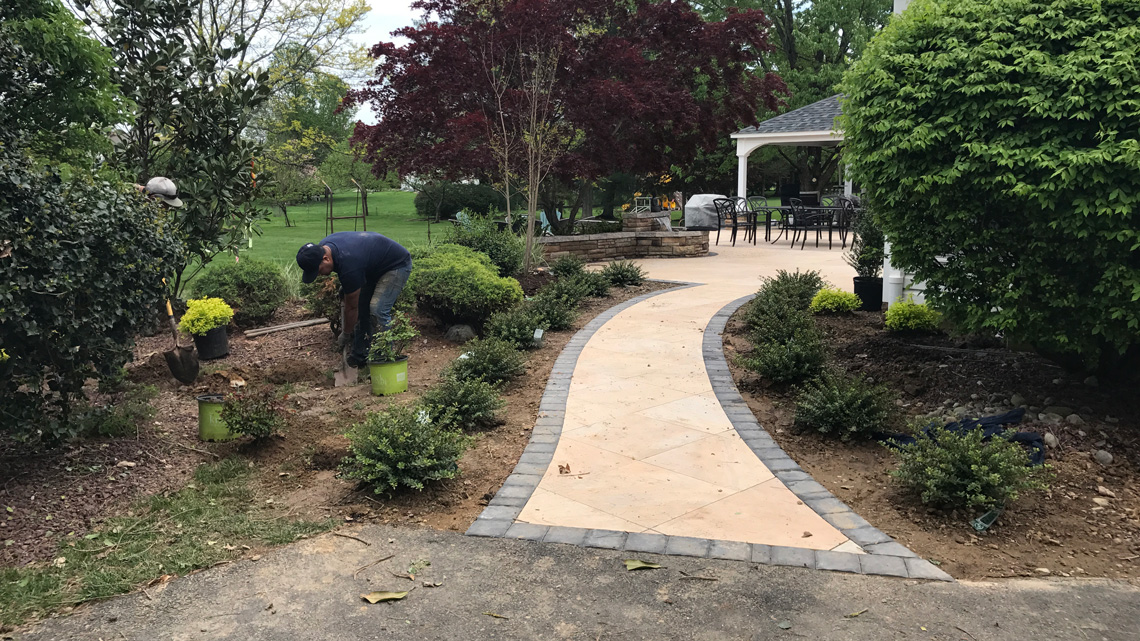 The outdoor kitchen features a grill, a sear station, sink, refrigerator and storage drawers in an L-shape with a raised seating-area/bar on one side. Aside from granite countertops, the kitchen is built from the EP Henry CSW product.

“It’s very cost-effective for us,” says Shennard. “It’s about half the price of building a masonry wall and has been a real game-changer for us. People can get that natural-stone look at a masonry block-wall price.”

Near the kitchen, but not covering it, is a 14-foot by 18-foot pavilion that provides a shaded dining and seating area. Shennard says the decision was made not to cover the kitchen because of the cost involved in meeting certain building codes that would have required a hood. 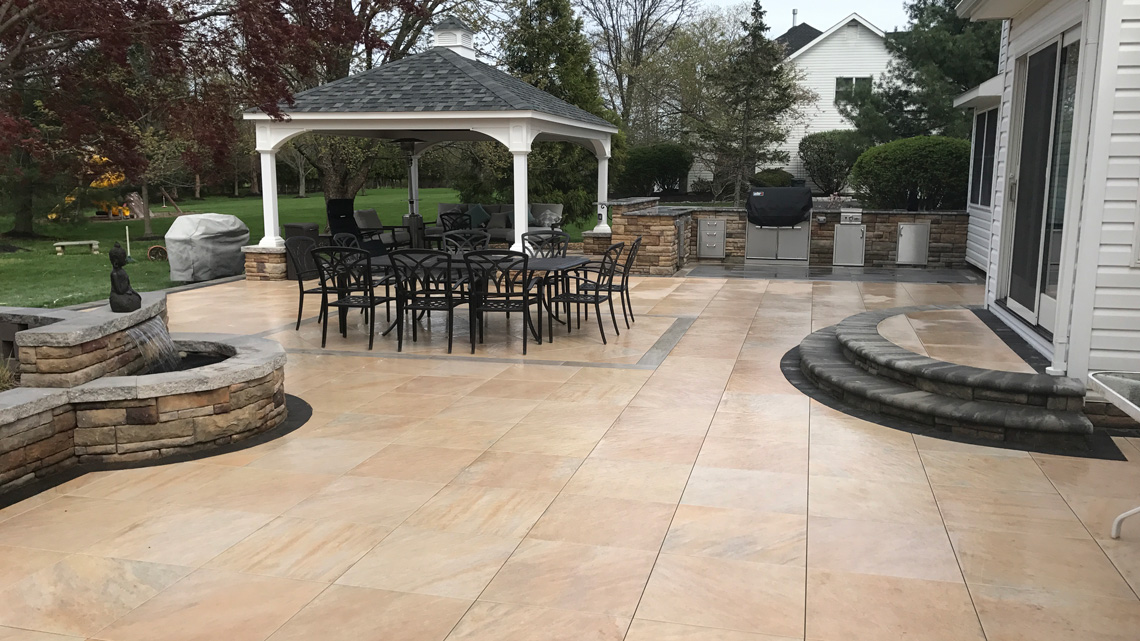 “It can become pretty pricy sometimes,” he says, adding that the patio starts to become shaded in mid-day, so sun isn’t an issue.

The pavilion is also wired for an outdoor television, although the clients didn’t opt to install one initially.

Completing the amenities are a pondless water feature and a firepit. The water feature was installed mainly so the client would have the sound of water while she’s working outdoors. 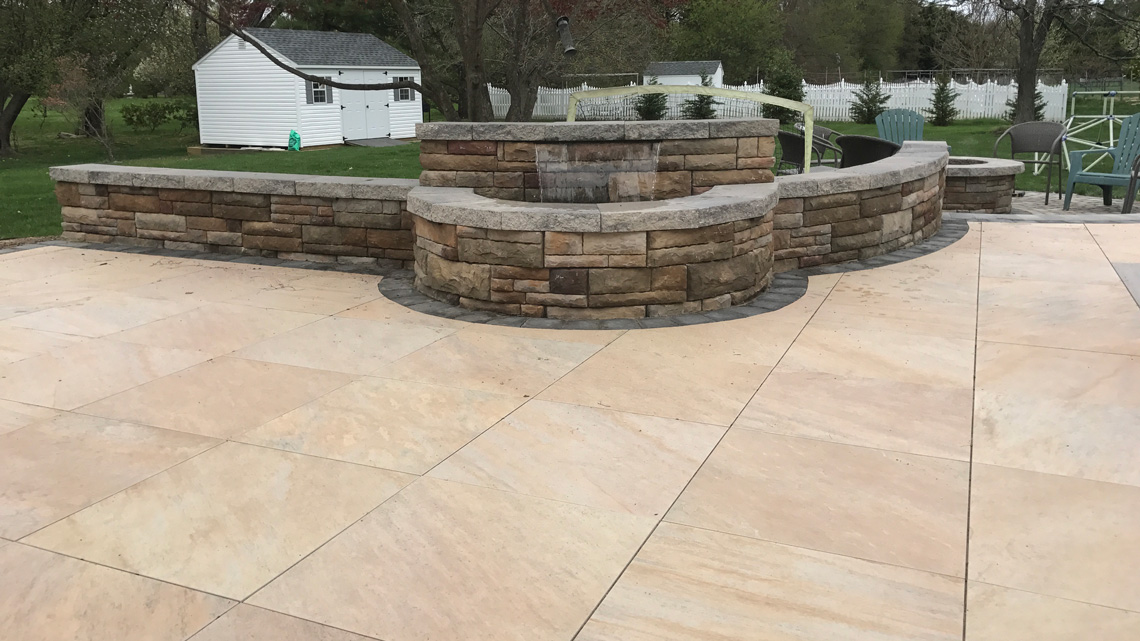 Shennard also describes the firepit as basic. Set at a level below the rest of the patio, it’s installed over Techo-Bloc’s Antika pavers.

The stairways both out of the back door and leading to the firepit are built from a combination of EP Henry CSW block and the company’s bullnose treads, with Atlas porcelain for the landing.

Lighting for the project involves more than 60 low-voltage LED fixtures. While the pavilion has a fan and lights, much of the lighting is in the pavilion’s columns, around the staircases coming out of the home and leading to the firepit level, and under the wall caps, including the kitchen countertops. 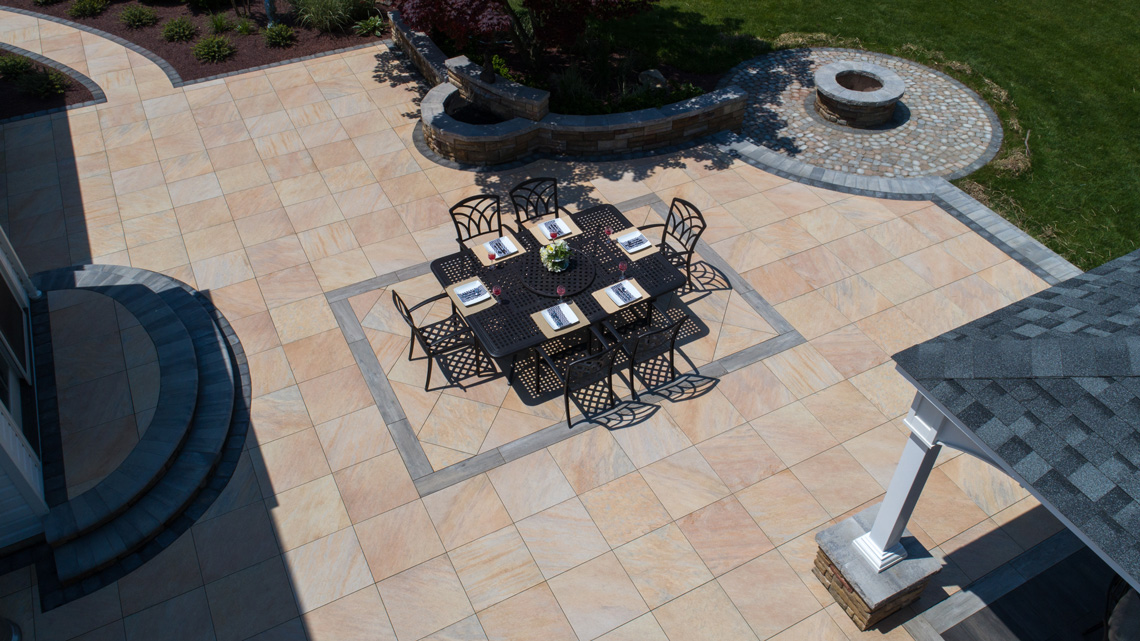 Shennard says grading and drainage for the project wasn’t an especial challenge.

“We had some natural pitch,” he says of the lot. “We had to do some drainage under the patio and away from the walls, but that was it. We didn’t have to stir much outside the construction footprint of the patio.”

However, the company did do some softscaping on the site. Shennard says some of the trees that had overgrown near the old patio were transplanted, but one of the goals of the clients was to open up the area. Much of the planting centered around bringing more color to the backyard. 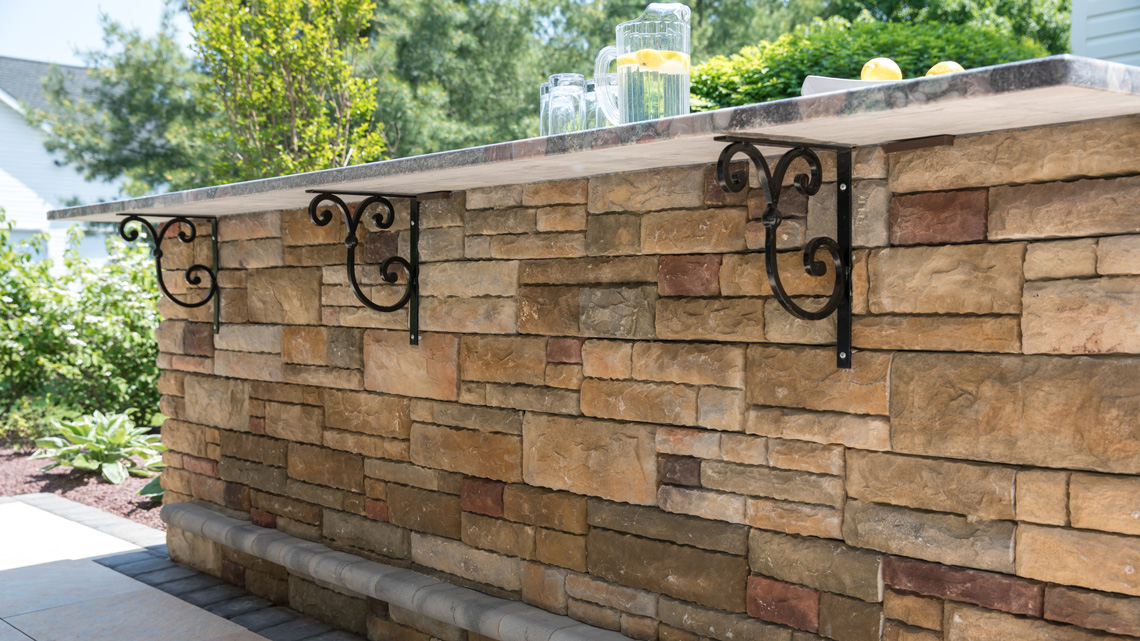 Work on the project took a four-man crew almost three months, and if the project offered one challenge it was the weather.

“We built this through the winter, although we were able to get the base in before the ground had frozen,” Shennard says. “Once we had the base in, I felt confident continuing to work on it, but because we were doing tile we had to wet-cut everything, and there had to be warm days to make sure the water wasn’t freezing in our saws.” 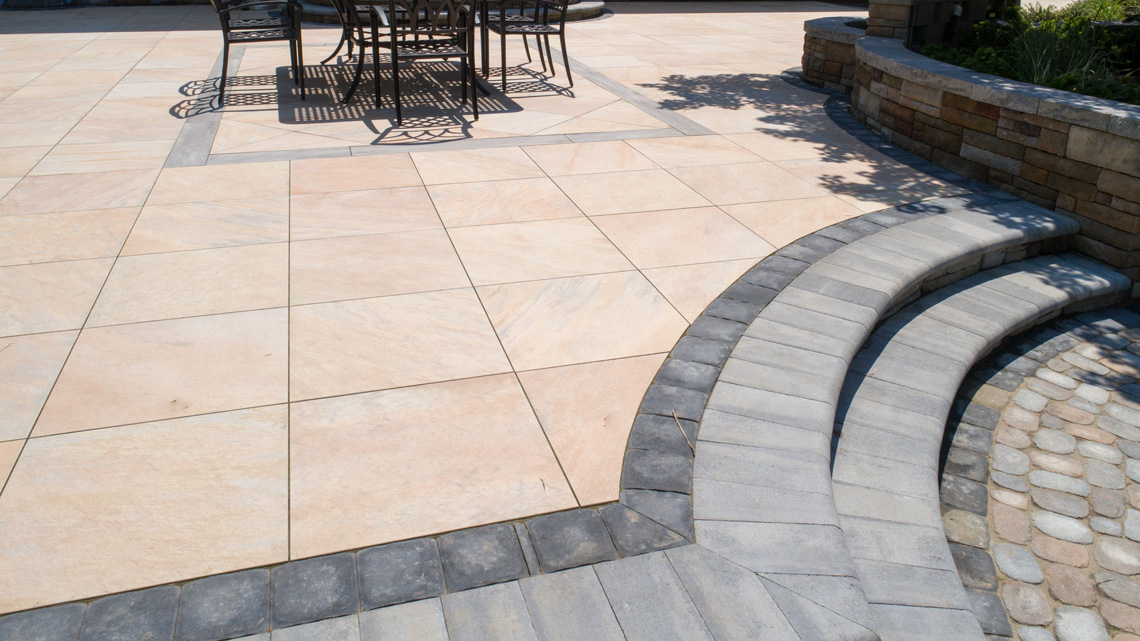 Still, he says, under better conditions, the crew could have finished the job in six or seven weeks.

Shennard is particularly proud that the job gave the clients just what they wanted, which in this case was a space where they could not only be outside as a family but would encourage their three boys to spend more time outdoors.

“That was the inspiration for the fire feature and the water,” he says. “We finished the job in early spring, and I visited the clients during the summer, and they just love it. We raised the value of the home and created an outdoor living space for them. It worked out very well. 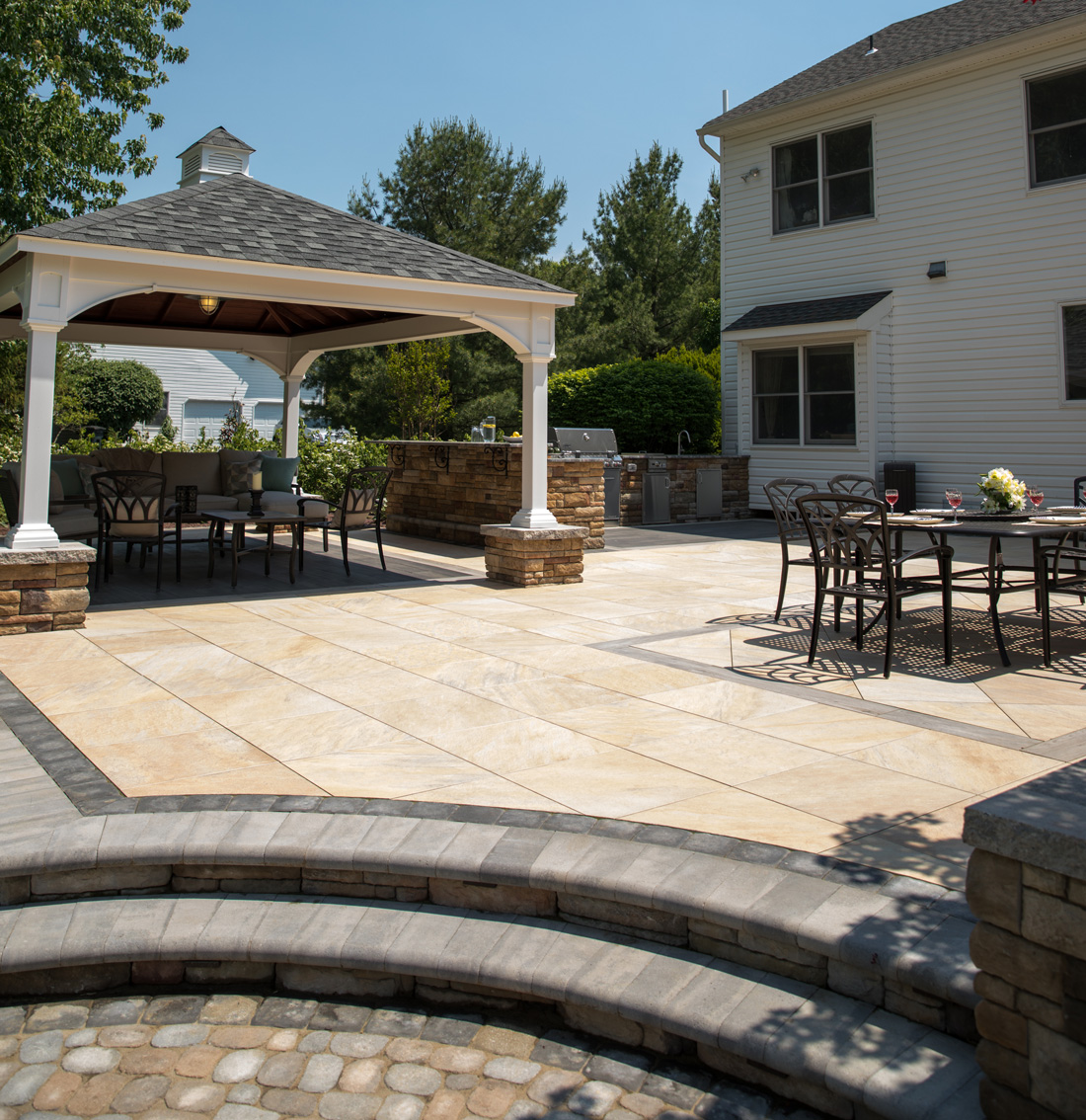 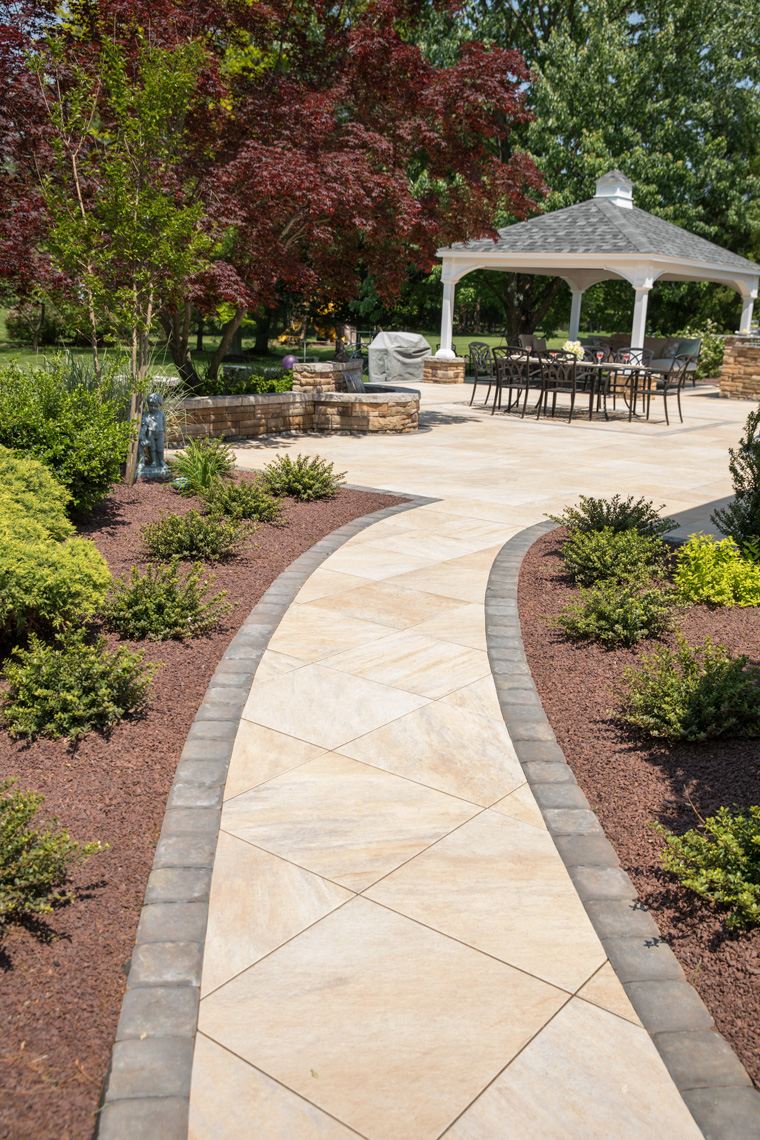