Many landscape clients — and their contractors — have turned to pavers for their good looks and durability without thinking about their versatility as a permeable surface.

Still, when designer Chris Rupp of Virginia Beach, Virginia-based Dominion Pavers was called in on a custom home job here, perviousness was utmost on his mind. Not only did the job call for a long driveway, but because of the property’s location in the Chesapeake Bay Protective Area, runoff had to be controlled to meet Resource Protection Area (RPA) setbacks.

Rupp explains that he frequently works with Sasser Construction LC of Portsmouth, Virginia, on his projects. In this case, because of the location of the land and its proximity to the bay, as well as the RPA setback, the owners were required to give up a certain square footage of impervious material for their project. 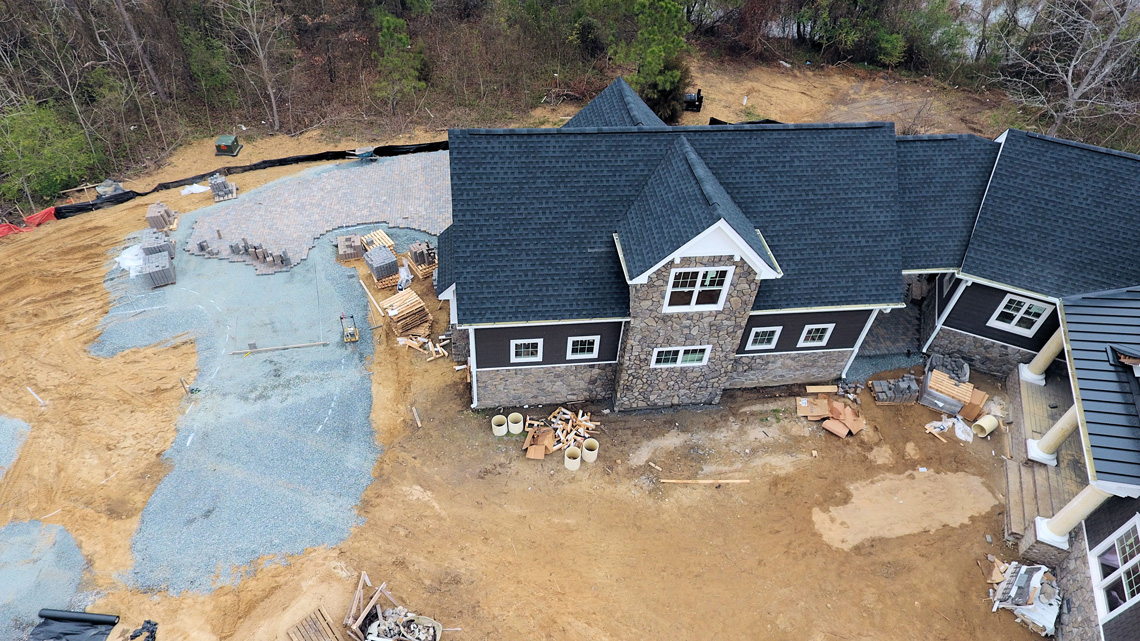 “That’s how we came up with a plan to tie the detached garage, which has some parking areas and a turnaround, along with a front walkway, together,” Rupp says. “There’s quite an elevation change, and because the house is on a little peninsula, we couldn’t have the stormwater running off into the RPA.”

That’s not to say appearance didn’t play its part in the selection of a paver product, however,

He found his answer in various color options within Belgard’s Aqualine line. The 80-millimeter pavers come with interlocking blind spacer bars, a smooth surface with a micro-chamfer and joint openings designed to optimize infiltration. 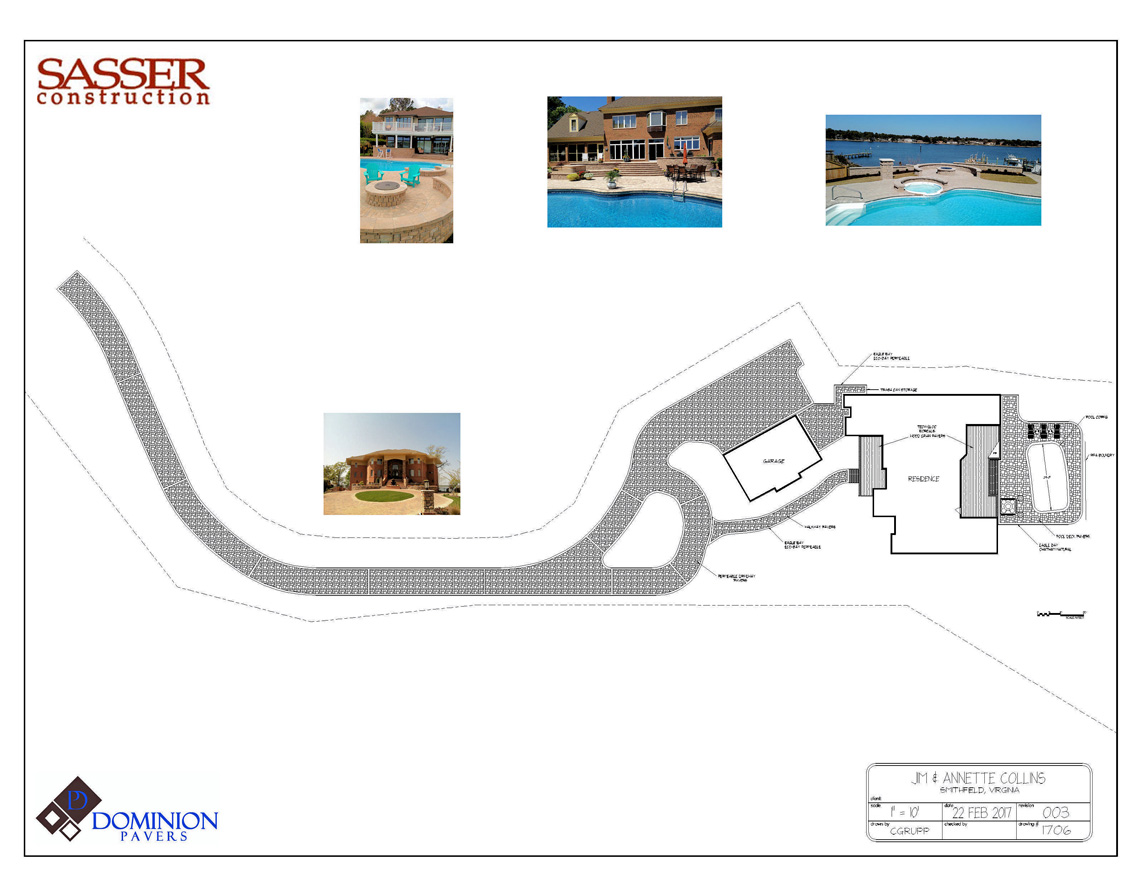 “I blended both those colors together in the driveway field, and then I used the Ardennes color as my border and the banding going across the driveway,” he says. “I used the bands to add architectural interest.”

Before installation, however, the entire 8,200 square feet of driveway was prepared, first with geogrid fabric and then with a course of 57 stone, topped with a number 8 stone. 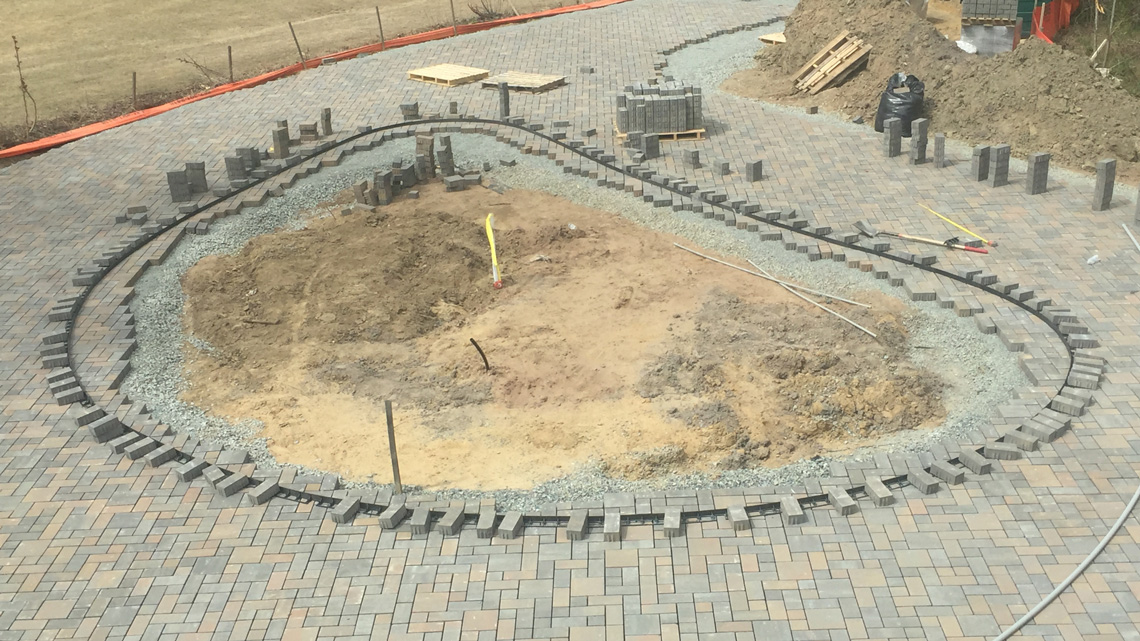 “There’s a minimum of six inches of the 57, and there are no fines to clog up the system,” Rupp says. “It’s a very clean filtration system.”

The driveway was not the only paver work Dominion did on the project. The company also installed approximately 1,000 square feet of Techo-Bloc wood grain plank pavers. These come in three sizes and were laid in a random pattern for the pool decking.

Remarkably, because the 8,200 square feet of pervious driveway met the requirement for the RPA, permeability wasn’t a concern with the pool decking, although the fact that it utilizes pavers provides a certain amount of drainage anyway. 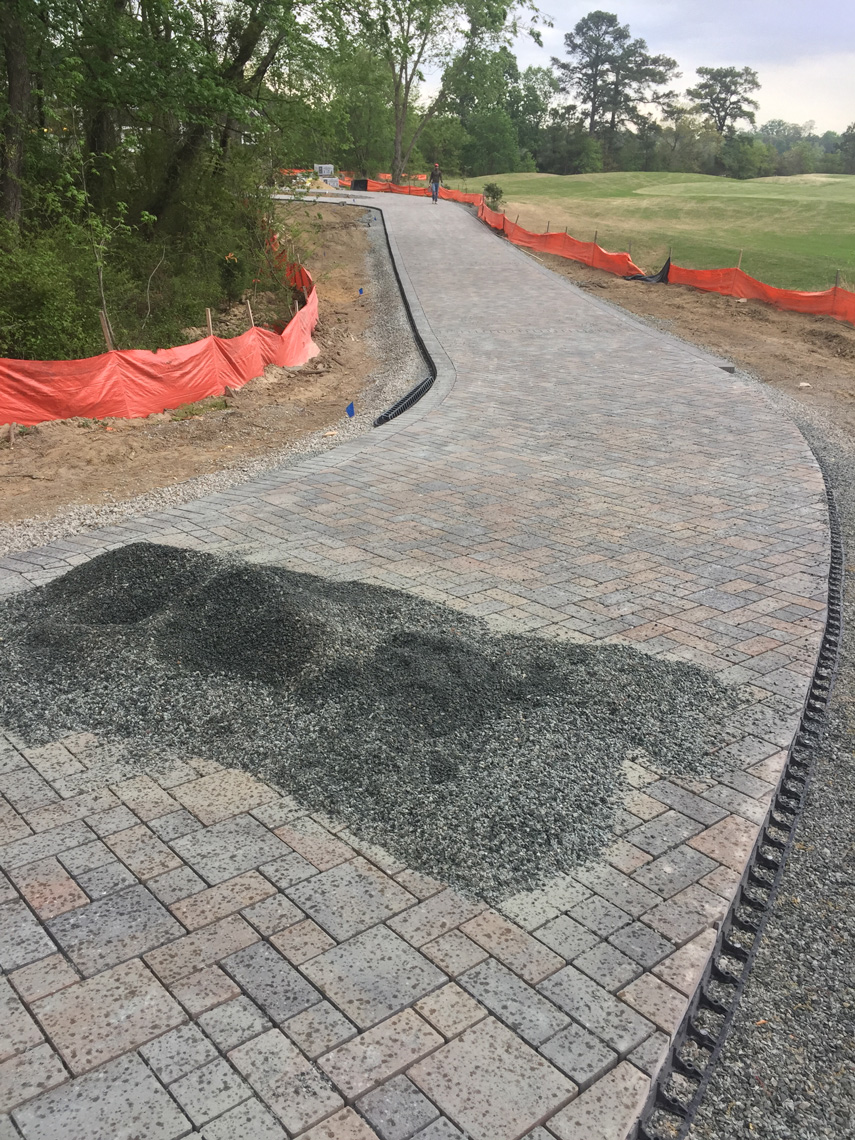 The driveway pavers were also sufficient to allow the owners to install more than 100 feet of liner aggregate concrete drive coming off the road going by the property.

“They met their qualification with the pervious square footage, so they could use that amount of standard concrete,” he says. “It saved their budget a little bit.”

Both the pool deck and the porches offered their own challenges. Rupp says the pool deck had to be expanded after the initial designs were finalized to accommodate a spa, while the porch steps had to be torn out and redone because they initially weren’t installed square by another sub. 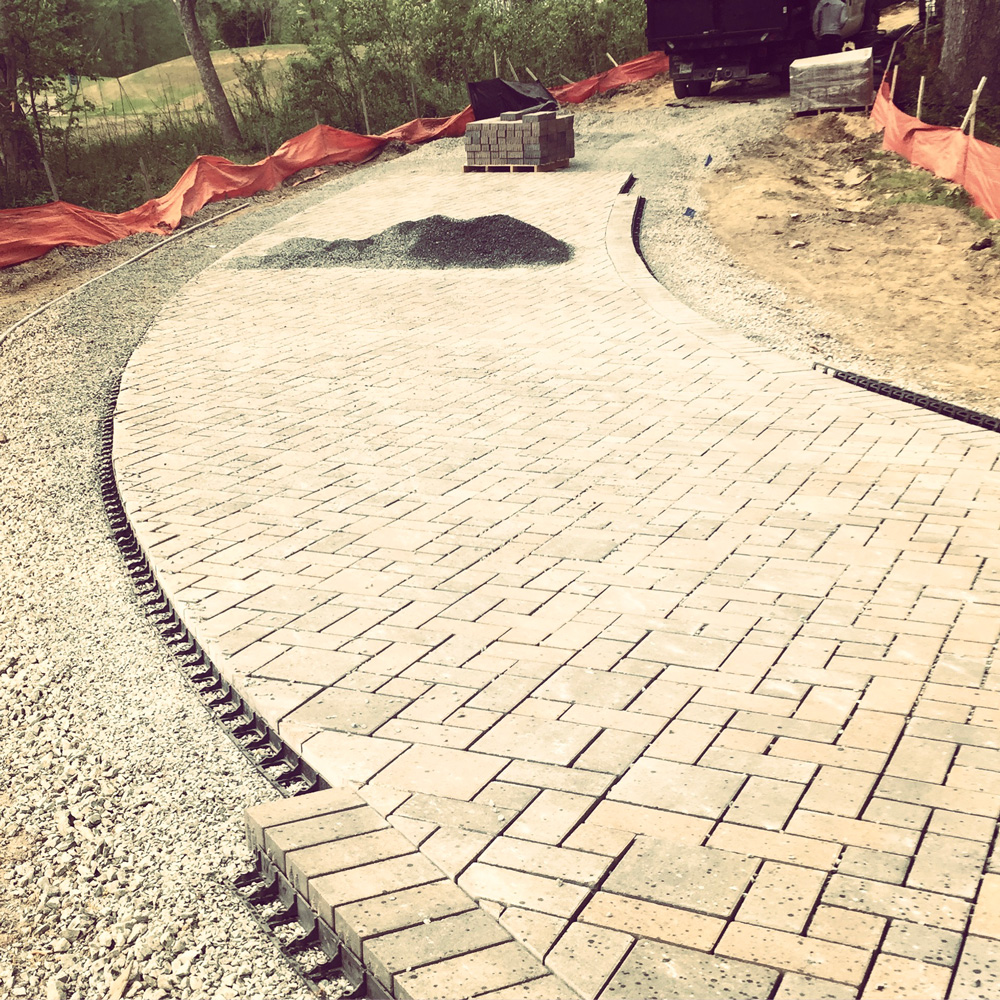 Additionally, much of the work was done during what Rupp characterizes as “miserable” fall weather. However, preparing the site for the driveway and the timing of the work — at the very end of the project — were Dominion’s biggest challenges, he says.

Rupp explains that when the project started, the site was still treed and had no access.

“They came in and cleared the trees away from the area where the driveway was going to be established,” he says. “Then, they came in and put in railroad ties sideways for access because any time it rained the property was impassible.”

Dominion and the landscapers were intended to be the last two companies to have access to the property, and when it came time to install the driveway, the company that had done the clearing was called back to bring in an excavator and remove the railroad ties.

“We then had to remove a lot of soil to get our base material down,” Rupp says. “It was a challenge.”

However, he adds that not all the finish work had been completed, leaving the company to compete with other craftsmen for space to mobilize and park vehicles. Ultimately, Dominion closed the site to anyone not willing to walk into the house with their tools and materials. 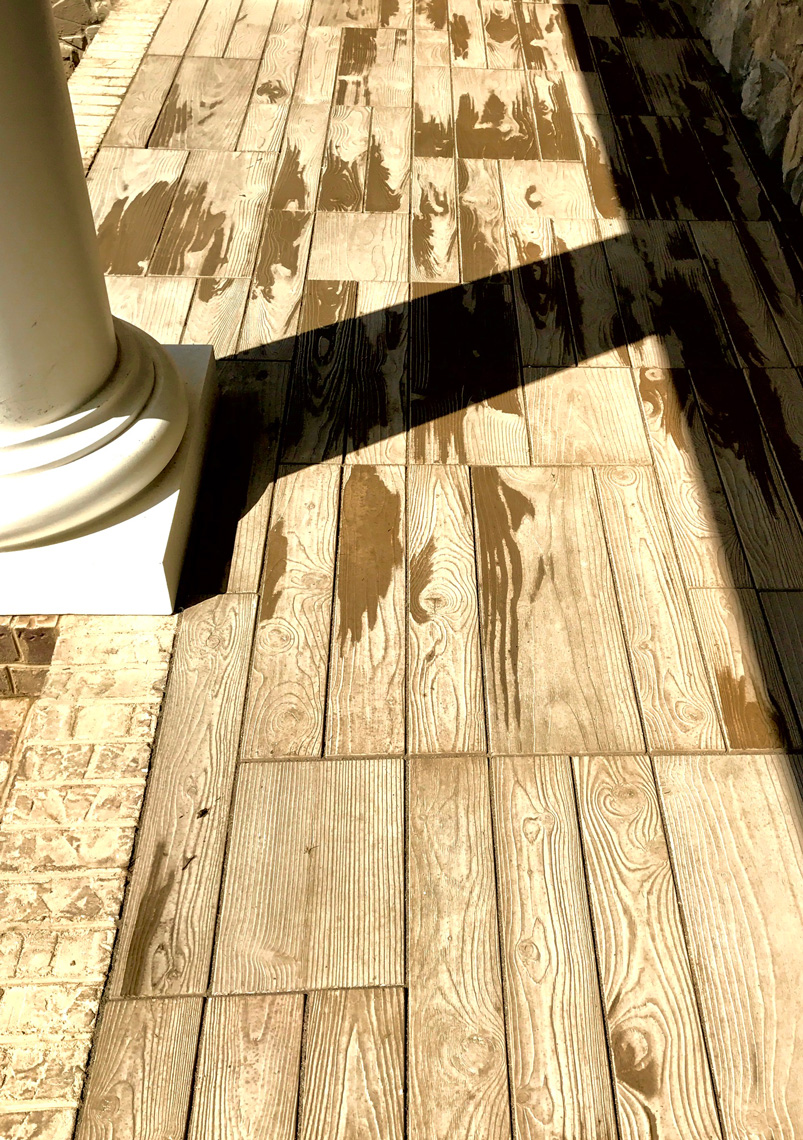 Even so, he estimates it took a four-to-six-man crew only seven weeks to complete the pool decking, porches and driveway area.

As the designer, Rupp believes he had the easiest part of the job.

“Our crews are super-dedicated,” he says. “They’ve been with us a long time, and we get many accolades on the work ethic of our crews. It’s a testament to their belief that a project is going to be there for a lifetime.”

In this case, not only are the homeowners very excited by the job, but the project was recognized by Hardscape North America for concrete pavers — permeable — residential, and by Belgard University for the outstanding use of materials from the Belgard Environmental Collection.

Rupp himself is especially proud of the driveway. Not only is it durable, he says, but it’s also environmentally sound.

“Driving down the driveway, it’s almost like a ski slope when you head down the hill,” he concludes. “But, there’s going to be virtually no runoff into the RPS, and no erosion running from the road.”

Next post Story Of A Landscape: Paver Driveway Base Serves As Rainwater Storage

Previous post Put Mosquitoes Out Of Work, Not Your Staff