Maintaining hardscapes has become a valuable add-on service for many landscape design/build companies as of late. While many surfaces installed these days, whether natural stone or concrete, can last years, if not decades, wear and tear can show through over time.

“We’ve worked with new installations and hardscapes that have considerable age. For new installs, we can protect the beauty of the surface. We can also restore older hardscapes to bring them back to life,” he says about using a sealer. “Either way, there is a real ‘wow factor’ when we are done.”

Since leading sealer vendors will provide training on the application of such products, savvy contractors can pick up this add-on service to offer customers and extend the life of new installations, but also expand opportunities in restoring older projects.

“Generally speaking, homeowners are not aware of the need to clean and seal,” Scocozza says. “Contractors can also be hesitant to offer the services because they lack experience, training and knowledge.” 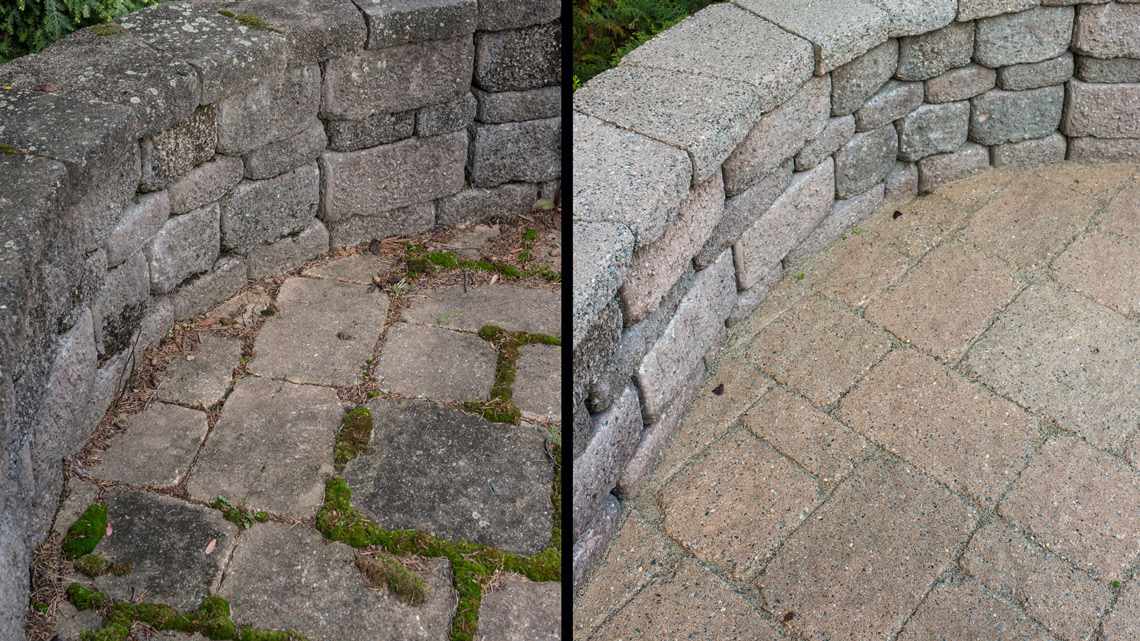 Before and after. Photo: SEK-Surebond

Scocozza acknowledges the learning curve involved. Some common difficulties associated with sealers include over-application of the sealer or applying it in poor weather. Moisture, for example, can become trapped under or within the sealant and can cause discoloration.

“If the installer is not completely familiar with sealing, they could get into trouble very quickly,” Scocozza says.

However, his experience with Surebond has shown they’re supportive of doing the job right.

“The initial training is only one part that results in successful application,” he says. “The company just doesn’t sell you a product and then say ‘goodbye and good luck.’”

Sealers can prevent the growth of weeds and grass in joints, protect pavers and natural stone against stains from grease, grime and oil, inhibit insect infestations and reduce accumulation of mildew and mold, according to information from Surebond.

The lack of awareness by homeowners that this type of service exists, coupled with contractor’s general wariness of sealers, has left it a largely untapped market, Scocozza says.

Sean Hillis of Premier Paver Restoration in New Orleans also says there seems to be few contractors involved in the cleaning and sealing segment, which means a business opportunity awaits.

“Those contractors that were doing paver restoration were very busy,” he says.

The climate and harsh salt air wreak havoc on hardscapes in New Orleans and along the gulf coast of Louisiana, Hillis says.

“The results were so good, the neighbors wanted their yards done, too. That led to more word-of-mouth, which led to more jobs,” he says.

While his business was successful, Hillis admits he was initially a bit overwhelmed.

“I went into business, but I needed to learn more,” says Hillis, who began as a paving installer. “So, I surrounded myself with the professionals in the field that could show me what I needed to do in order to grow.” This included taking a class on cleaning and sealing at SEK-Surebond.

Larry Jouett, owner of Odd Job Larry in Kenosha, Wisconsin, arrived at the same conclusion as Hillis after conducting a detailed analysis of the financial potential in paver restoration.

“We crunched the numbers and it looked very promising,” he says. “We determined our overhead and profit margins, the startup costs and what we needed to accomplish. All of that looked quite attractive, so we developed a business and marketing plan and started a new business.”