Story Of A Landscape: Paver Driveway Base Serves As Rainwater Storage

This permeable paver driveway solved a wet, muddy mess of a frontyard.

Many lots have drainage problems, and a good landscape design and implementation can often mitigate them. Still, it takes a bit of creative thinking to decide the best answer for a very wet lot is a new driveway.

That’s the approach landscape architect Gina Giannetti took with one home in Wilmette, Illinois, and the results were not only a solution surpassing the clients’ expectations, but recognition from Hardscape North America last fall in the category of permeable clay brick pavers.

It probably didn’t hurt that Giannetti and her employer, locally based O’Brien Landscapes had some familiarity with the property. She says the homeowners first contacted the company in 2015.

“They had just moved into the house at that time, and we were addressing some of the most urgent issues,” Giannetti said. “They had a courtyard at the basement level that needed to be completely rebuilt and some planting work. We also developed a master plan at that time.” 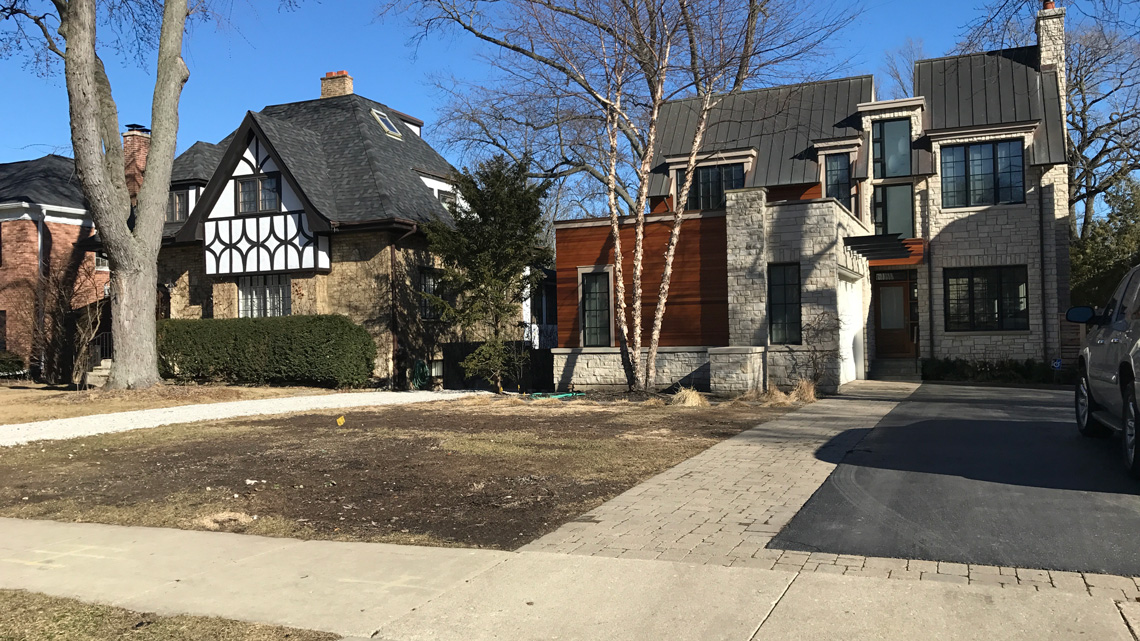 She adds that in 2016 the company came back and expanded on the 2015 work, with plans to tackle the front yard in 2017. However, in the interim the homeowners took a step that made the front yard that much more challenging.

Giannetti explains that not only does the property slope significantly from the front to the back, but the home is the low point within the block.

“They had a flooding issue, so as a piece of the overall project, another company bored a pipe from the back to the front of the house, and put in a pump,” she explains. “The pump brings the water from the backyard to an outlet in the middle of the front yard.”

While the pipe-and-pump did mitigate the flooding in the backyard, it left the front yard wet and muddy. And, because Wilmette has regulations on how close to the property lines and street they could discharge the water, they needed a good solution that would keep the water on the property.

Fortunately, Giannetti says the master plan had already called for a new front yard landscape and driveway. However, she opted to take that plan another step. 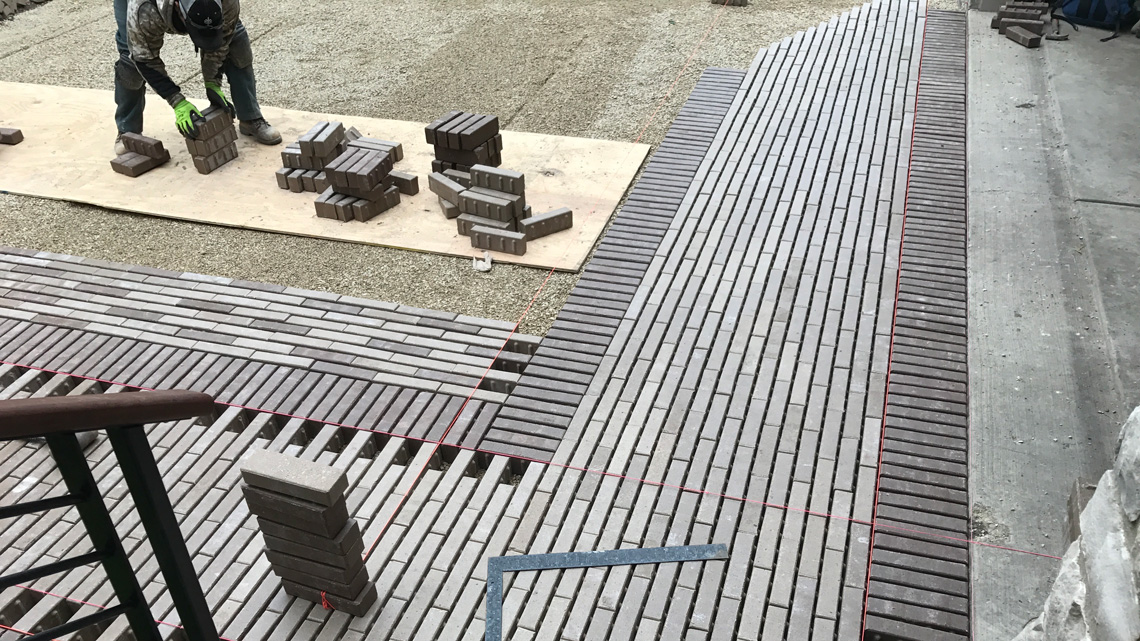 “We decided to turn the entire driveway into a permeable pavement installation, so the base material would serve as their temporary rainwater detention,” she says. “That’s when we started talking about permeable paver options.”

The landscape architect notes there were many options to choose from. In the end, the clients went with Whitacre Greer’s Boardwalk pavers in three different colors to complement the home’s random ashlar stone façade.

The 2.25- by 9- by 3-inch pavers are installed in a running bond pattern with a border. To differentiate the adjacent sidewalk from the driveway, the sidewalk pavers run perpendicular to the street, while the driveway itself was set parallel. 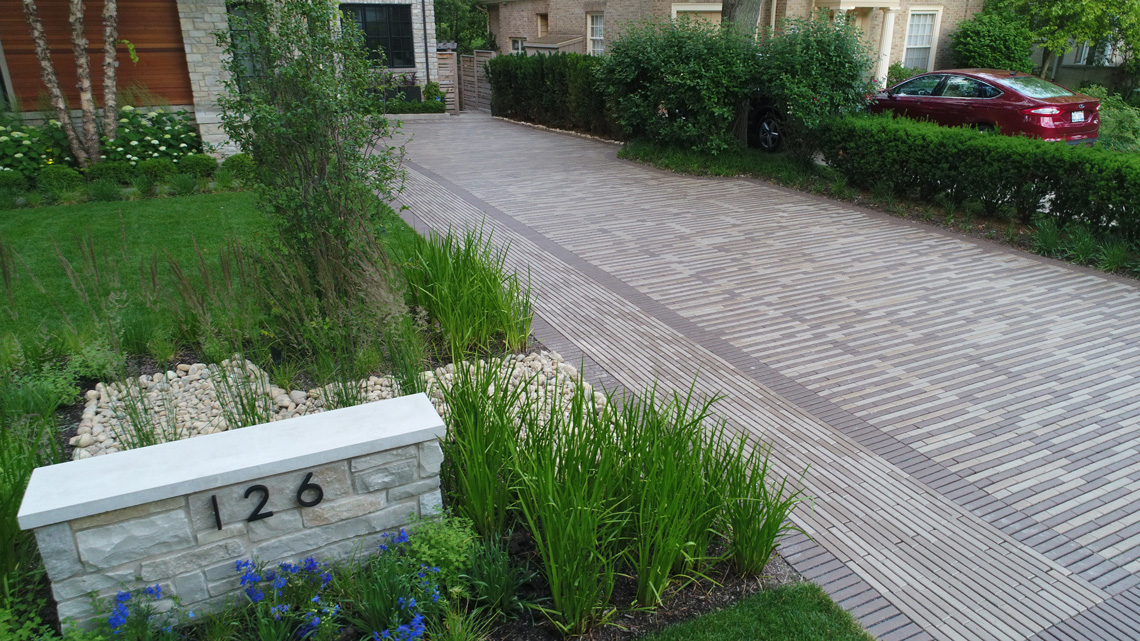 The real trick was grading the base of the driveway and sidewalk to be deep enough (12 inches) to collect the overflow from a drywell Giannetti installed around the pipe outlet.

“There’s decorative stone on the surface of the drywell, but it actually goes fairly deep onto river rock,” she explains. “When the drywell gets full, the water travels toward the driveway and fills up the base there. If that gets full, it goes into the street.”

Because her plan could do nothing to change several fixed points, including the front sidewalk and the level of the garage floor, the base was graded to pitch the water flow under the driveway toward the street.

The driveway’s base is ¾-inch non-limestone angular clean gravel with no fines; the setting course is Grade 9 chips of the same material.

“One of the most gratifying things was the first time it rained after we were done, I got a video text message from the homeowner showing the pump working and the driveway and front yard not being flooded,” she says.

Perhaps not surprisingly, that’s the part of the project of which Giannetti is most proud, although she adds she also is pleased at how the project completes the look of the house. 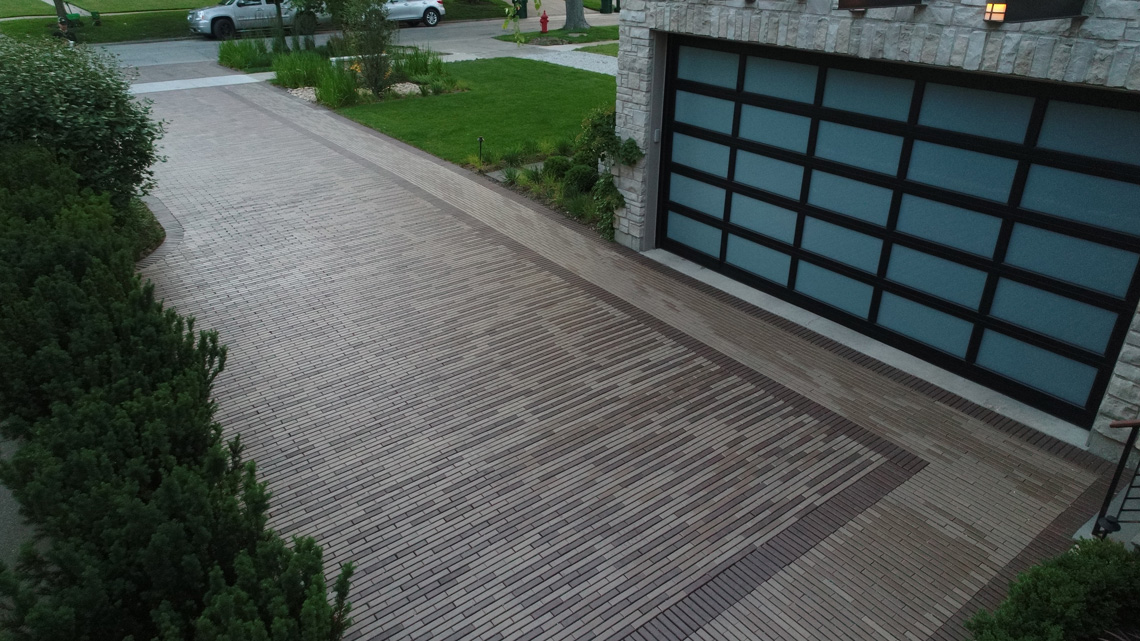 “They have a really stunning house that’s different from the others in the neighborhood,” she observes. “Before we did the front yard project, the front landscape and driveway were very ordinary and not in keeping with the home. Now, it’s unique and beautiful.”

And, she adds it wouldn’t be possible without her favorite feature: the pavers.

“They really carry the eye to the front of the house,” Giannetti says. “It’s a really cool product, used in a unique way.”

Those same pavers also provided the project’s biggest challenge. Giannetti has nothing but praise for the crews responsible for laying them straight and in a color pattern ratio that she envisioned.

“The hardest parts were the execution, and they were handled expertly by the crews,” she says.

She estimates the company had one or two three-man crews on the site during the build-out, which took about two weeks. The entire project – landscape and hardscape — came in at approximately $80,000. 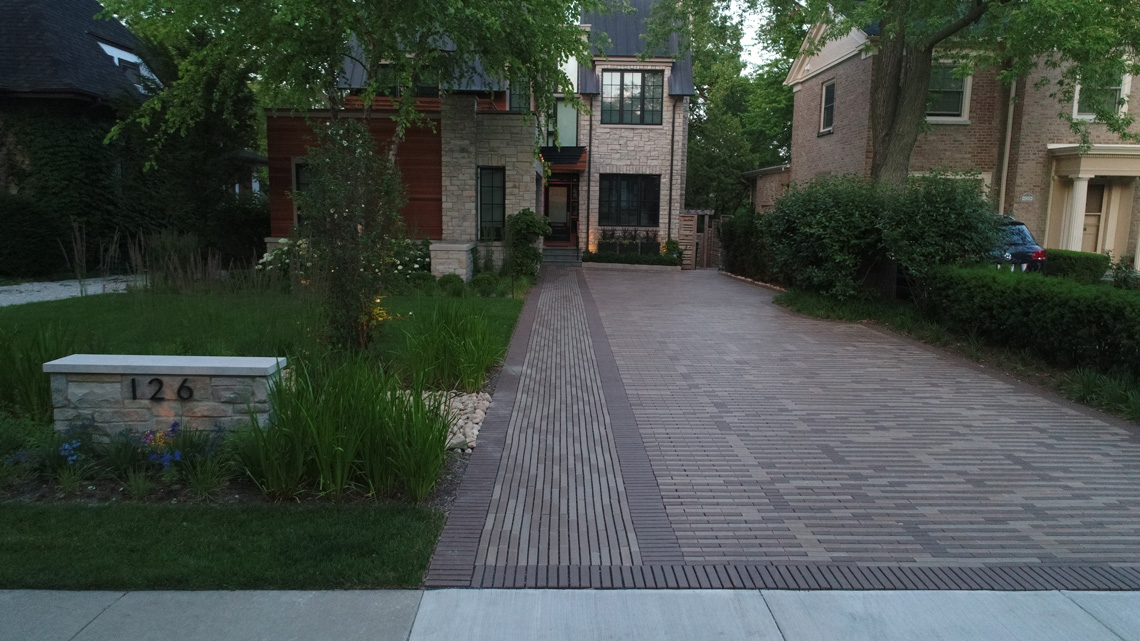 Once proper drainage was assured, Giannetti and O’Brien’s Landscapes went back in and re-landscaped the front yard, including building an address plaque, adding some new foundation plantings and gardens and installing new sod.

Giannetti says the yard already had a River birch, Climbing hydrangea and – rare for northern Illinois – a Stewartia pseudo-Camilla.

“We added some Karl Foerster reed grass for texture,” she says. “We added some Incrediball hydrangea, some Green Velvet boxwood, and then the perennial layer is a mix of Summer beauty allium and Autumn moor grass.

The landscapers also added a mix of up-lighting for the trees and path lights.

This is the first award the project has won, although possibly not the last. However, Giannetti says she’s waiting for the plantings to grow in before entering it as a master plan. She does expect O’Brien’s Landscapes will be back on the site again in 2018, but future work won’t be as extensive as the front yard and driveway.

“There may be additional garden projects in 2018 to complete the master plan,” Giannetti concludes “But, future work won’t be as extensive as the front yard and driveway.”

Next post Story Of A Landscape: Clay Brick Maintains Look For Historic Campus In Tennessee