Ever been made to wear rain boots to walk through a garden containing a shallow pool walkway? That’s what the International Garden Festival asked its visitors to do last year when visiting one of five winning concepts from around the world to exhibit annually at the Reford Gardens in Quebec, Canada. This year, another five concepts have been selected from 203 entrants from 31 countries, and each one is inspiring in its own unique way. 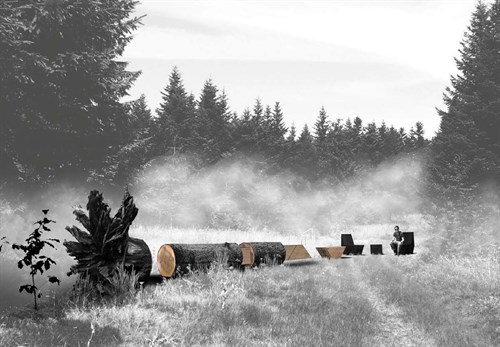 The Cave, designed by Christian Poules, a Basel, Switzerland-based landscape architect, features a four-sided room framed by steel filled with stones. Natural light slips through rocks in the walls, creating shadows upon a triangular platform covered with moss and ferns that will be suspended from above. “It’s a room for dreamers,” Poules says.

Cyclops, by Phoenix, Arizona-based architect and artist Craig Chapple, consists of more than 250 wooden boards arranged in a concentric circle, attached to a steel ring suspended from surrounding trees by stainless steel cables. “Viewers find themselves playing a central role in the work as they rediscover their relationships to the energy in their environment,” Chapple says. 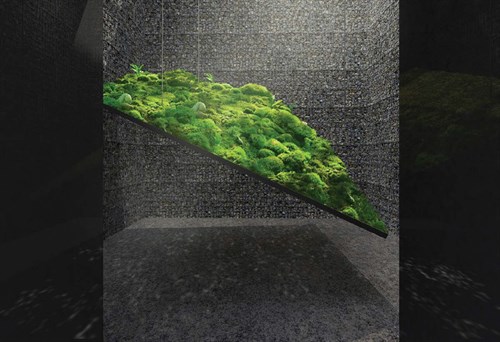 Jack’s House, by three intern architects from Quebec City (Romy Brosseau, Rosemarie Faille-Faubert and Emilie Gagne-Loranger), is inspired by the story “Jack and the Beanstalk.” It features stepping stones leading to a square area containing trellises laced with bean vines. To be planted in May, their clumps of red flowers will be in bloom by the end of July before the beans form. Inside the structure, plants create a maze-like experience, leading visitors to small hidden gardens.

TiiLT, created by architect Sean Redford and designer Chris Wiebe of Winnipeg-based studio SRCW, features a series of bright yellow tents that can change orientation depending on the position of the sun, evoking a school of fish or flock of birds. 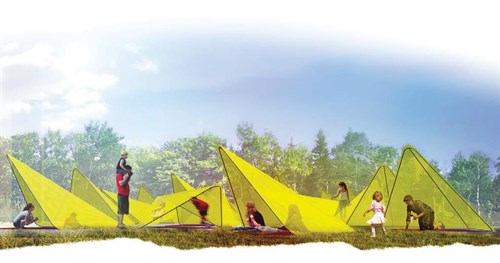 Carbone, designed by French landscape design studio Coache Lacaille Paysagistes, features a fallen tree trunk, cut into five modules that refer to the process of furniture fabrication. “The installation evokes the cycle of production as a parallel to the carbon cycle,” says the design team. “The garden landscaped or the landscape gardened. Regenerating the forest and sowing where we have harvested brings nature back to life. It transmits the love of landscape to those who will outlive us.”

The exhibits open on June 24 and goes until October 2016.

Next post Story of a Landscape: Wildflowers Bloom at Billings Public Library

Previous post Ways to Reduce Your Chance of Equipment Theft