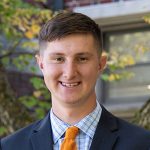 With an estimated 99.9 million viewers watching this year’s big Super Bowl game between the San Francisco 49ers and the Kansas City Chiefs, there was little room for unforced errors — both on and off the field — and Burbrink helped run defense to keep the field looking camera ready for kickoff.

According to the Toro Super Bowl Sports Turf Training Program competition winner, every element of the February 2 game, other than the game itself, was rehearsed multiple times, which can take a toll on the field long before the first snap.

Chosen by Toro as the winner of its 2020 program, Burbrink, 21, who’s majoring in Turfgrass Science and Management, traveled to Miami for nine days. He worked alongside NFL field directors Ed Mangan, George Toma, and the Super Bowl grounds crew at Hard Rock Stadium on turfgrass maintenance, logo painting, field preparation for media day, halftime preparation and field cleanup. Since 1967, Toro has partnered with the NFL to provide equipment and expertise to help prepare the game field and multiple practice fields leading up to the biggest professional football game of the year.

“They sure practice everything,” the Cincinnati native said after he returned to school last week following the Chiefs’ 31-20 come-from-behind victory. “There was nothing spur of the moment.”

From JLo and Shakira’s halftime performance to the NFL’s 100 year celebration — and even the post-game awards presentation — performers, heavy stages and other equipment were moved on and off the field to practice numerous times throughout the week.

“The halftime show probably put more traffic onto the field than the actual game did,” said Burbrink, explaining there were about 30 pieces of staging that were pushed onto the field for the halftime show. To protect the field, the crew put down tarp before each practice and afterwards, touched up lines and logos.

For the NFL 100 All-Time Team pregame ceremony, which celebrated the centennial anniversary of the football league, organizers invited a local high school football team to stand in for football greats participating in the event. Burbrink said the students wore placards bearing the names of the legends they were representing during rehearsal.

Burbrink also helped move the big overhead grow lights on and off the field to allow for rehearsals throughout the week. Hard Rock Stadium uses Bermuda grass 419 tifway for its field, which Burbrink said gets resod about 11 times a year for events including Miami Dolphins and Miami Hurricanes games, said Burbrink. The Super Bowl field was laid in mid-January and grow lights helped keep it fresh before the game.

After all that practicing, Burbrink said he’d had enough of the halftime performance long before the Sunday night game (“Too much of it honestly,” he said), but thought the game itself was “fantastic.” Because there were only a limited number of sideline passes, he watched his first professional football game from the shop tucked away in the stadium with the rest of the grounds crew, including the head groundskeeper for the Chiefs. But that didn’t stop him from seeing some of the biggest names in sports during final preparations, like NFL Commissioner Roger Goodell, New England Patriots owner Robert Kraft and New York Yankees legend Alex Rodriguez.

Did working non-stop for a week to get the Super Bowl field ready change his mind about focusing on research after graduation? “Not at all,” he laughed. “Working 122 hours (in about a week) isn’t something I want to do any time soon.” [Read Turf‘s previous story on Burbrink, published ahead of Super Bowl LIV.]