Adapting with the Industry

Change is the only constant for this sod grower

Bob Sharpe entered the turf business 38 years ago at the age of 17. He is general manager for Ameri-Turf in Anderson, Ind., just outside Indianapolis, a company that grows about 700 acres of Kentucky bluegrass and RTF tall fescue. Sharpe has worked for the sod farm through several ownerships, and has seen a lot of changes in the sod industry, including changes in equipment, turfgrass varieties and, most recently, sod demand.

Many of the changes have made sod production easier, but marketing remains a major challenge to producers. While Sharpe cited repeat customers and word-of-mouth recommendations as major elements in selling sod, the new variety of RTF tall fescue grown by Ameri-Turf draws new customers to the licensed grower of the improved fescue.

Ameri-Turf is a successor company to a sod business started by Ben Warren in 1932, with its beginning as Warren’s Turf in the Chicago suburban community of Palos Heights. The business moved to Anderson, Ind., in 1960, and expanded to include extensive sod holdings that were later sold. Ameri-Turf includes the Anderson sod farm and a 350-acre sod farm in Suisun, Calif. Both are part of Warren’s Turf Group of Ameri-Companies, based in Palm Beach Gardens, Fla., and owned by Larry Woerner.

In citing the many changes to the sod industry, Sharpe said, “I’ve moved from a Ryan hand sod cutter to the Brouwer, and now to the Trebro AutoStack.” He noted the added ease of cutting sod with each progressive step, particularly with the move to the Trebro, which allows one person to cut sod.

Turfgrass varieties, in general, have improved dramatically. Sharpe noted that many varieties of Kentucky bluegrass are now available, but he pointed to the improved fescue as most significant. “We just put fescue on the lawn at a $3 million home,” he said. RTF tall fescue was patented by Barenbrug USA in 2004, and is a new type of tall fescue that produces rhizomes, the underground stem that spreads the plant. As it forms new growth, RTF tall fescue performs much like bluegrass, but it can survive drought conditions found in the transition zone, much like other tall fescues. The shorter recuperation time for RTF tall fescue contributes to its being a grass of choice in several settings.

“We deal strictly with landscape contractors or other contractors who install the sod, such as on highway projects or other commercial jobs. We don’t sell to builders or homeowners,” Sharpe said. Ameri-Turf sod is used extensively in the area surrounding Indianapolis in both residential and commercial settings that include lawns, sports fields, golf courses and highway projects.

“Our distribution center makes it convenient for landscapers to pick up sod,” Sharpe said. “Getting just the right amount of sod to the distribution center can sometimes be a juggling act. We encourage customers to call at least four hours ahead for big projects, particularly in this hot weather when we try not to have too much there. Occasionally we have to throw away some sod or may be a little short if a customer picks up more than expected.”

Dryland farming is risky even in the Midwest, where ample rainfall is the norm and many growers have turned to irrigation to assure consistency. While sufficient rainfall isn’t usually a problem in central Indiana, the amount can vary seasonally, as well as from year to year.

Receiving too much rain creates more issues for midwestern sod farmers than receiving too little. “We were down about 40 percent in sales last year mostly due to the continual rain,” Sharpe said. Landscapers were often unable to install sod with the unusually wet year.

“We used to grow sod on muck soil,” Sharpe said. “We’ve moved away from that and grow it on rocky soil that allows it to adapt well to where most of the sod is used. All the topsoil has usually been removed in new developments, and sod grown on the rocky soil interfaces better with the soil at most sites.”

Kentucky bluegrass sod can sometimes regrow, depending on what time of year and how wet the fields are when the sod is cut. RTF tall fescue is always replanted with only one crop harvested from each seeding.

Progressive mowers are used in both 22 and 36-foot sizes. “We use the Trebro AutoStack, and Brouwer harvesters and Bucyrus Magnum harvesters are used for the big rolls,” Sharpe said. Ingersoll Rand forklifts are primarily used in the fields, and truck-mounted Moffett forklifts from Cargotec are also part of the company’s equipment arsenal.

Sharpe cited the reduction in labor required with the introduction of the Trebro AutoStack harvesters. “We have nine full-time employees,” he said. “That’s down from a high of 31. We’ve had a lot of improvements in equipment that have led to a reduction in the number of people required.” The reduced number of employees can be primarily attributed to the mechanization of the sod industry, with the current lower demand for sod another factor. With demand for sod down throughout the country, most sod producers have reduced the number of employees.

Ameri-Turf currently maintains two semi-trucks for delivering sod to its Indianapolis distribution center and to customers. Most sod is delivered via contract haulers.

“Finding new business is always the challenge,” Sharpe said. “We’ve tried a number of ways to market our sod, but most of our business continues to be repeat customers and word-of-mouth. The licensed RTF tall fescue brings in customers who want the RTF. We’re the only licensed producer of RTF in northern Indiana.”

The depressed economy has had a major impact on commercial and residential development with few start-up projects. While some residential owners are upgrading landscaping and adding new sod to existing yards, others are simply holding off on projects. With fewer jobs available, landscapers are using less sod, and some have turned to seed in an effort to keep costs down.

“We see a lot of our competition going out of business,” Sharpe said, noting that a number of sod farms are converting their acres to row crops. In contrast with increasing production costs, sod prices have remained mostly flat for a number of years.

Sharpe noted the need to promote the benefits of sod, which not only gives a pleasant appearance, but also serves to filter water. A primary advantage is that sod permits an immediate lawn, while seeding takes time, a point that is even more important depending on the time of year construction may be completed.

Ameri-Turf is a member of Turf Producers International (TPI) and Midwest Regional Turfgrass Association. University research results and expertise from both Purdue University and the University of Illinois have been utilized by the company for information on growing sod.

Nancy Riggs is a freelance writer and has been covering the green industry for Turf for almost 20 years. She resides in Mt. Zion, Ill. 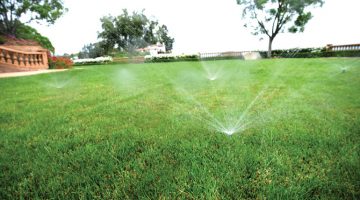