Irrigation efficiency is a hot topic in California and other parts of the country suffering from drought. For landscape contractors, delivering irrigation services efficiently and profitably makes as much business sense as it does environmental sense. Squandering valuable time and money with sloppy service is as unwise as wasting water.

A few experienced professionals shared how they maximize the efficiency of their irrigation services.

Ben Full is irrigation division leader at All-Terrain Grounds Maintenance, Fargo, North Dakota. While the company’s goal is to provide customers a single source for outdoor services, internally the business is structured into different divisions.

“Right from the time we decided to get into irrigation 10 years ago, it was its own separate entity,” Full says. Having a dedicated irrigation crew, led by someone who manages that business component, produces a better result than constantly pulling employees off of other crews to help out with irrigation.

“We like to have specialized, trained people doing irrigation work. And because irrigation is such a unique trade, it’s easier to have one person train one team. It’s different than just hopping on a mower and going,” Full says. “You need a dedicated crew. You can’t try to train everyone in the company in irrigation. There are so many different things you need to know.”

“When we started our irrigation division a little over five years ago, we had to start a route by splitting it with other services but quickly found that once we devoted someone solely to irrigation, the department began to grow. We needed someone who was an expert in that department and was dedicated to making it grow,” explains Keith Ruebeling, company president.

Attempting to count on maintenance personnel to provide irrigation services limits growth potential and can result in quality issues. “A tech may go to a property for a repair, but if he knows that he needs to get back to his lawns the next day, he may not be willing to take the time to thoroughly evaluate a system, look for opportunities to make upgrades and give the client the best results possible,” Ruebeling states.

“The objective isn’t to just fix the issues as they arrive,” he adds. “We look at optimizing a system for maximum efficiency.”

Heron Home & Outdoor in Orlando, Florida, specifically trains its sales staff in irrigation, so when a salesperson visits a property, he can inspect its irrigation system. There’s no need for a second visit by an irrigation salesperson to look things over. When it comes to working on irrigation systems, though, the company uses a dedicated staff. “These people are specialists because it’s important that the work be done professionally,” says CEO Greg Clendenin. 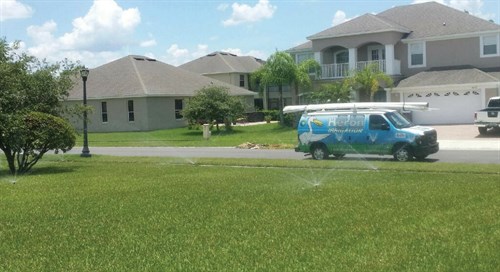 Heron Home & Outdoor blankets the central Florida market with eight branches. Even so, the company does all of the scheduling of its irrigation crews at the main office in Orlando to keep operations running efficiently.

While every aspect of landscape work depends on certain equipment and tools to get the job done, irrigation is more complex because it regularly requires supplies and parts. For this reason, parts inventory becomes more important. But carrying around parts for every single irrigation system doesn’t make sense, logistically or financially. It also doesn’t make sense to have to run to the store every time a basic part is needed. Walking that line is just part of irrigation work.

“Based on the past, you need to be able to predict your future inventory needs,” Clendenin says. He advises setting and monitoring “stock out” levels. For example, when the inventory of a certain sprinkler head gets down to a certain level, it’s time to reorder.

“You set those levels based on how many per day or per week you use and what your lead time in getting them is,” Clendenin explains. “You want to keep the people in the field working. You don’t want to hold up production because you’re not managing your inventory properly. At the same time, you don’t want to have too much on hand because it could be susceptible to being damaged while it’s waiting to be used. Once you own it, you want to turn it over as quickly as you can.”

Presently, he uses a manual system to track his company’s irrigation parts inventory, but he anticipates installing inventory management software soon to help with the process.

Clendenin says standardizing goes a long way toward minimizing the inventory needed in the warehouse and on trucks. “We don’t use a whole lot of different brands. That also lets us standardize our training,” he adds.

All-Terrain’s Full acknowledges that he’s still trying to figure out exactly how much inventory to maintain at any given time. “We usually keep a pretty good supply of sprinkler heads and valves and nozzles on hand because those are the things that tend to break the most,” he explains. “But then there are those specialty components we don’t know we need until we’re on a particular job. In those cases, we have to go get parts just the way a plumber would.”

Even when going to a store for parts, there are ways to do so as efficiently as possible, he says. That means knowing which brands and parts the stores and supply houses carry and the store locations closest to each job site.

Irrigation crews also should have their own dedicated vehicles because they need to carry an inventory of parts to every job, Ruebeling advises. 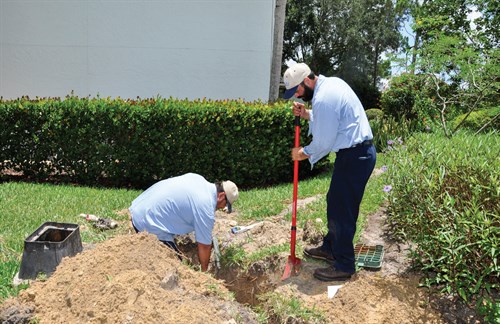 Because much of the work on an irrigation system is underground, scheduling the amount of time required to repair a system is more challenging than scheduling mowing or most other property management services.

All-Terrain is working to improve its irrigation scheduling and routing, which can be tricky. With mowing, predicting how many minutes each job will take is easier than with irrigation services.

“We try to gauge things based on what the problem is so we can fit as much work within each day as possible,” Full says. “If we need to replace a sprinkler head, for example, we know that’ll take about 15 minutes. If there’s a leak, it might take 45 minutes to an hour. We try to figure out generally how long it will take and then schedule accordingly.” 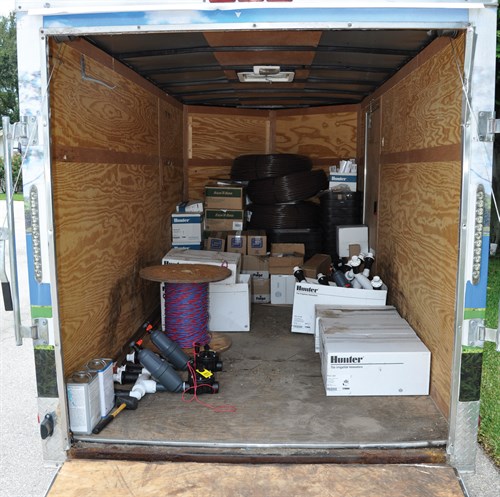 Knowing which parts and how many to stock is a challenge irrigation work presents that’s not as common in other segments of landscaping. Having the right parts on each job site helps avoid time wasted driving to a supply house.

But things don’t always go according to plan, so building in a little extra time is important.

“Everything is underground, so sometimes you don’t know what you’re going to find until you start digging,” Full says. “When I schedule things, I intentionally overschedule the amount of time required just so we’re not falling behind. With irrigation, as opposed to mowing, a lot of our customers like to be at home to let us in the house, so we want to make sure that when we schedule to be there at 11 o’clock, we’re there at 11 o’clock.”

Especially with emergency calls, it can be difficult to schedule irrigation work accurately, agrees Larue’s Ruebeling. “You never know if it will be a simple repair of two heads or require a complete renovation, making it hard to predict,” he says, stressing that communication is critical to avoiding scheduling snafus. 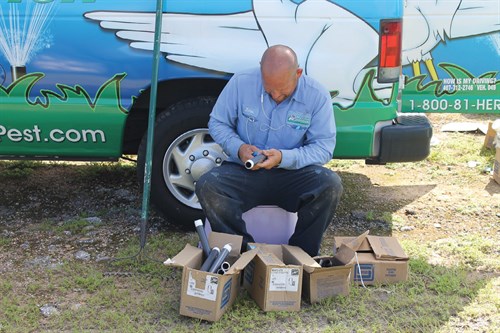 Heron Home & Outdoor has worked to standardize the brands it uses, which helps simplify the job of stocking a parts inventory.

“When the office staff, technician and supervisor are all on the same page, everything flows better. Scheduling work that is based on the technician’s skill set also saves time,” Ruebeling says. “Sending someone out to solve an issue they haven’t worked on before is going to require a second person on the job, which could be avoided by everyone scheduling appropriately. This only happens when the office staff knows to ask customers the right questions and then identifies who the best person for the job will be. It also requires a supervisor who takes the time to understand the workload for the day so that technicians go out prepared.”

“You’re always trying to do things better and more efficiently. There’s no such thing as status quo,” says Clendenin, who centralized scheduling and routing of Heron Home & Outdoor’s irrigation crews. The company operates eight branches across central Florida, and each has its own irrigation crew that reports to a branch manager. Even so, irrigation scheduling is handled at the Orlando headquarters.

Ruebeling adds that irrigation’s complexities make bidding on the work challenging. Each site must be thoroughly evaluated to avoid underbidding. “It is a common mistake starting out to underbid just to get a leg in the door. It is worth doing the extra groundwork upfront to avoid disappointment in the end,” he says. 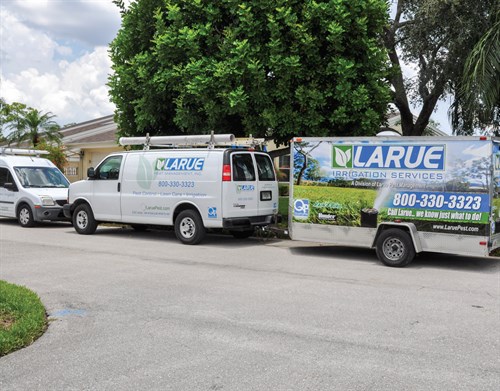 Full recently downsized the company’s irrigation crew slightly to make it operate more efficiently. Either too many or not enough technicians leads to inefficiencies, he says.

The company now employs three specialized irrigation technicians. How they work depends on the season. “During spring start-up season, each of us will go out with a list of customers for the day. During the summer months, we’ll typically have one technician doing mainly service calls and the other two working together doing mostly installations,” Full explains. He adds that surprises can happen when working on irrigation, so some days he needs to switch things up a little.