Save Water During Shrub Establishment

Installing and maintaining woody ornamentals (shrubs) is a popular and profitable green industry service. Many of you landscape pros provide it as part of your landscape design offerings or, perhaps, as an enhancement to your mowing/maintenance contracts.

Even so, you realize there’s always the risk of plant failures, something you definitely want to avoid if you can. Failures are expensive.

Do you offer your clients free plant replacements during the first year of establishment? Callbacks caused by dying or weakly performing woodies are profit and time killers. Consider also the expense incurred in sourcing and buying replacement shrubs.

There are, of course, many reasons why woodies die or struggle due to mistakes made during establishment, but one of the most common is poor watering practices during their critical 20-to-28-week establishment period.

Complicating the picture, at least for contractors or nursery retailers who offer free one-year plant replacements, is the fact that property owners are usually in charge of keeping their new shrubs watered. And that’s whether they have irrigation systems or not. 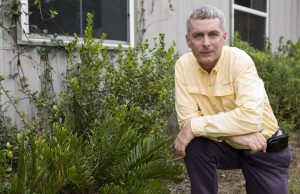 For this reason, it’s always a good idea to give your customers easy-to-follow watering instructions for getting their new shrubs off to a strong start. Perhaps you can start that conversation by reminding them of how they’ll be saving water, which is a cost to them.

“Horticulturists have observed that many landscapes with installed irrigation are overwatered. This is wasted water,” says Edward “Ed” Gilman (pictured here), a horticulture professor at the University of Florida IFAS.

With water conservation in mind, Gilman and his university collaborators set out to determine the minimum irrigation needs for recently planted, commonly grown shrubs.

“We had conducted similar studies for recently planted trees but there was little to guide irrigation of shrubs,” he tells Turf magazine.

“We finally have our irrigation recommendations for establishing shrubs backed up with science. We need less irrigation than many people think,” Gilman continues.

Gilman’s five-year study focused on the survival and growth rates of three-gallon, container-grown shrubs in four different regions of Florida. Not surprisingly, plants needed more frequent watering during establishment in the warmer regions of the state, or during dry periods.

However, whether native or non-native, the study revealed that applying less water frequently resulted in stronger, more attractive plants compared to irrigating with large volumes of water infrequently. Equally telling, the study indicated that there was “no difference between native and non-native species for the amount of water required for establishment,” claims Gilman.

“Recently planted shrubs need irrigation primarily on top of the root ball because that is where the roots are located. Irrigation applied to the soil surrounding the root ball mostly goes unused and wastes water because there are no roots there,” says Gilman.

Even after successful establishment, shrubs will need suplementary irrigation during extended dry spells and heat. This is especially true of woodies growing in light soils rather than clay, which is slower to allow penetration but also dries out much more slowly.

Gilman shares these simple steps to boost your shrubs’ vigor and growth during establishment:

Since the University of Florida study focused on shrubs commonly found in that state, Gilman says he’s hopeful researchers will conduct similar studies elsewhere within the United States to validate his findings.