Want a sure-fire, time-tested way to improve your landscape company and have more fun, too?

It’s simple: Hook up with the owners or key managers of other similar-sized, non-competing operations and start sharing experiences and trading ideas. I don’t think there’s a faster way to build a company. I’m shocked that so few owners in the landscape industry do this. 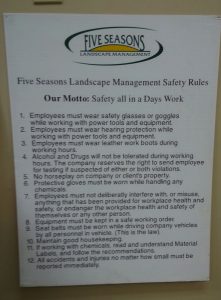 I was reminded of this recently when Rick Cuddihe and the company owners participating in his Dynamic Concepts Peer Group recently allowed me to spend a day with them at Five Seasons Landscape Management in Reynoldsburg, Ohio. Five Seasons, run by Bill Leidecker, president, and Steve Woods, COO, vice president, is one of the better and busiest independent landscape companies in the Columbus/central Ohio market. Peer group members came from Chicago, New Jersey, Kentucky, Indiana and New York. In the three years these owners have been meeting together twice a year, most have become very good friends and are very frank with each other.

While I wasn’t permitted to attend the peer group sessions when the owners discussed their financials, I did get to enjoy presentations by several of Five Seasons Landscape Management’s key managers. The more I learn about successful companies, such as Five Seasons, and about they deal with their challenges and still succeed, the more good stuff I can pass along in this blog or on the pages of Turf magazine. 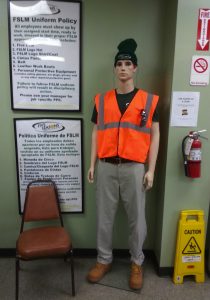 That said, let me share at least one swell idea I saw during a whirlwind tour of the Five Seasons Landscape Management facility, which is located in the country a half-hour drive east of Columbus, Ohio.

Walking into one of the crew rooms at the company headquarters I found myself face to face with a life-sized mannequin dished out in work garb. What a neat idea. Not only does the company have posters explaining the company’s dress and

safety codes in both English and Spanish, it shows them, too, inasmuch as the company’s field staff is comprised of both local gringos and Spanish speakers.

I’m not sure the folks at Five Seasons came up with this idea on their own. There seemed to be some kidding between peer group member Ron Lester of Architerra, Inc., Indian Sprints, Illinois, and the Five Season folks about where the idea of the mannequin came from in the first place.

If you’re not in a peer group yet, join industry associations and start getting to know some of your peers. You will find other owners that, like you, that would love to share some of the things they’ve learned – that is, as long as you are willing to reciprocate.