Today’s design/build projects are pushing the envelope of what’s possible.

Complete outdoor living areas remain one of the most popular requests of homeowners as more people look to create extensions of their homes that capitalize on using outdoor spaces. The real estate trends show that many homeowners are staying put in their existing homes rather than moving. As a result, they are upgrading by completing outdoor living areas that allow them to maximize their living space and entertaining possibilities. Landscape contractors report that more than ever before homeowners are raising the bar on what they want.

After close to two decades in the business, Nick Nykorczuk, president of Creative Pavers Inc., a design/build landscaping firm in Gibbstown, New Jersey, says the design/build desires of homeowners have really evolved. In his early days of business, everyone wanted just a deck or patio and that was typically the end of the design process. Today, however, they want the entire outdoor living space. And Nykorczuk says that each year homeowners continue to up the ante in terms of what that means. 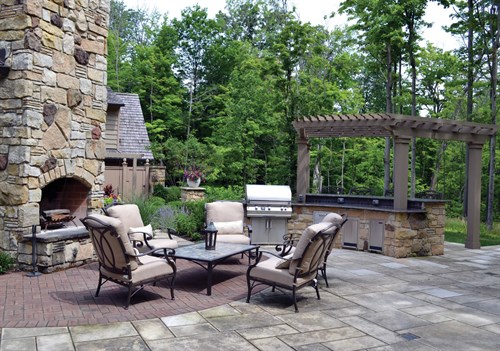 “It’s almost to the point where the outdoor kitchens and fire pits are the norm and homeowners are taking it much further than that in many cases,” Nykorczuk says. “We just completed a project for an outdoor hibachi grill station that was complete with a curved bar for entertaining. It’s become a question of how can they take a basic concept – like an outdoor kitchen – and make it even better.”

Many of the ideas seem to come from a desire to entertain outdoors, says Nykorczuk, adding that he’s done a number of wood-fired pizza ovens as part of outdoor patio designs. He says homeowners don’t just want one outdoor living space but a number of areas that create an entire experience.

“Just like you’d have multiple rooms that make up your home, I’m getting requests for multiple outdoor spaces,” Nykorczuk says. “Of course you have the kitchen, but we’re also seeing seating and entertainment areas and also getting more requests for outdoor showers – even from people who don’t have pools. It’s all about homeowners making the most out of their outdoor spaces and truly turning them into extensions of their homes.”

Glenn Jacobsen, president of Jacobsen Landscape Design and Construction in Midland Park, New Jersey, is seeing the same trend. He says homeowners want outdoor living areas that have a “delineation of spaces.” Patios are separated into two areas – what he calls the “entertainment area” and the “dining area.” Most homeowners these days want both. 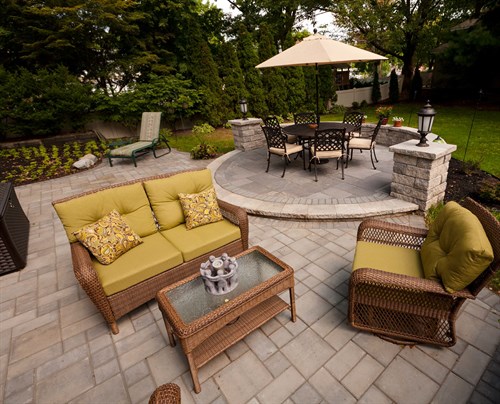 When it comes to these amazing outdoor living areas, homeowners aren’t letting climate stand in their way, either. Jacobsen says the trend in the Northeast is extending the use of the space — despite the time of year.

“During the fall and winter, it gets dark very early and homeowners are also dealing with significant temperature drops,” Jacobsen says. “As a result, we are doing a lot of fire pits, fireplaces and outdoor heaters. These allow you to extend your time outdoors both with the light and heat they provide.”

In terms of what types of fire pits are most popular, Jacobsen is seeing a trend toward gas with log sets, lava rock or ceramic beads. He says that’s because it has no odor, is easy to use and convenient for just short periods of time. But there are always those customers who are going to prefer a natural, real wood-burning fire pit for the smell and the ambiance.

In addition, the landscape contractors we spoke with also stressed that outdoor lighting is an important element for outdoor living areas and becoming more popular among homeowners. Homeowners realize that high-quality outdoor lighting allows them to extend the use of their space well into the evening hours and they see incredible value in that.

“With the advent of LED, outdoor lighting is more efficient than ever,” Jacobsen says. “A proper lighting design will greatly enhance an outdoor living space.”

An abundance of ideas

There is really no shortage of design/build ideas out there with sources like HOUZZ and HGTV showcasing the many possibilities to homeowners. John Peterson, design and sales manager for Exscape Designs in Chesterland, Ohio, says it is this exposure that is the reason behind the increasing interest in outdoor living spaces that are bigger and better. As homeowners see what’s possible in their backyards, they keep setting the bar higher.

“With all these ideas circulating, clients are realizing that outdoor living spaces aren’t just for Southern California or even a resort they may have visited,” Peterson says. “They’re realizing they can be enjoyed and installed in their own backyard.s”

While clients have a lot of access to ideas and many landscaper contractors have done these types of projects, it may feel difficult to stand out from the crowd. But Dean Stafford, owner and landscape designer of Dean’s Landscaping LLC, in West Chester, Pennsylvania, says that clients appreciate a company who can take their ideas and turn them into something truly special. As outdoor living spaces become more the norm, what homeowners are really looking for is something unique. 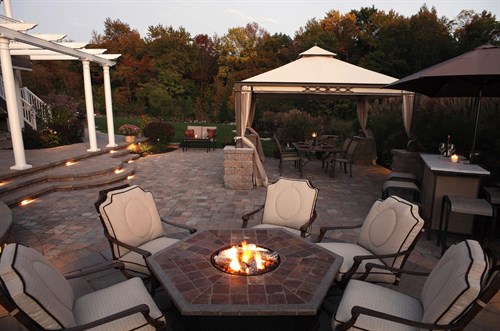 Many people are looking for distinct areas to entertain, and fire pits are making that possible all year long.

“What we’re seeing increasingly is that our discerning clients really want personalization,” Stafford says. “We’ve been awarded projects — both large and small — in which we’ve had a strong presentation that shows personalized detail. They may have had multiple companies bid the project, but what really speaks to them is finding something that makes it their own.”

While homeowners are definitely spending more money again, Mike Garcia, owner of Enviroscape in Redondo Beach, California, says he has noticed that clients are spending a little more cautiously and a little more wisely. He says there’s no doubt that the “staycation trend” is thriving. But he says he’s also seeing homeowners ask about upgrades that will give them some return on investment.

“I think homeowners have the money and are willing to spend it but they want to make sure they’re getting something in return,” Garcia says. “They weren’t as worried about that before the recession. Take cars, for instance. Before 2008 people were buying Hummers. Now they’re still spending a lot of money on a car, but it’s a Prius, and they’re getting savings back. I’m seeing the exact same thing with my design build projects.”

Garcia says this is why so many of his clients are requesting subsurface drip irrigation. He says he’s also doing a lot of built-in grills as part of outdoor kitchens.

“My clients see value in something like that, too, because they know they’ll save money by eating at home more instead of going to restaurants,” Garcia says. “In general, I think there’s a trend of homeowners looking at any project and wanting to make sure they’re getting value out of it. They are much savvier consumers than ever before.”

The vast majority of clients have at least some idea of what they want out of their backyard spaces, say the design/build contractors we spoke to. Almost everyone has at least a few photos or a description of an idea they’ve seen. Still, the contractors we spoke to all emphasized the importance of a collaborative effort. Ideas truly come to life when the landscape contractor and the client work together. 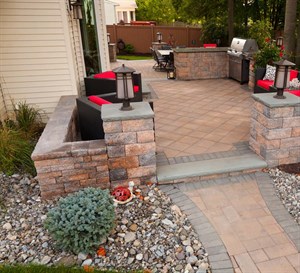 “The best jobs are a collaborative effort between the landscape architect/designer and the client,” says Peterson. “Typically the client comes with a high-level wish list of ideas and thoughts, then we show what they are looking for in more detail and show them ideas they never thought about. Sometimes these expanded ideas get shot down, but many times they do get incorporated into the final design.”

Peterson also says it’s important that they continue to “push the design envelope” with clients, otherwise it is easy to become stale and projects will always be the same. Peterson says that Exscape is continuously looking for fresh design ideas to suggest to their clients.

Nykorczuk says they approach every job with a question about how homeowners envision using the space, not a question about what they want us to build. He says that kind of approach really gets to the root of what they want to achieve. A homeowner might say: “I want to create more shade,” or “I want to be able to entertain a large crowd.” These kinds of statements help Nykorczuk determine the ideal designs.

When creating a landscape design, Jacobsen says he often uses a questionnaire and asks the clients – often a husband and wife – to fill it out together.

“That helps us determine their wants and needs,” he says. “It’s sort of a wish list for the property. Once we have that information, we start the process. The best designs are those that incorporate a mix of our expertise and the client’s input. Every client has different needs and we think it’s very important to listen to what the customer wants.”

Next post Story of a Landscape: Designing Sue's Garden at American University

Previous post Why the Battle for H-2B Will Intensify