A long-term vision is what helped create the landscaping on this property.

It’s not every day that a stop at a flower shop leads to recognition by the National Association of Landscape Professionals (NALP).

Nor was the project – dubbed Monte Vista – which earned J.W. Townsend Landscapes a Merit Award for Residential Contracting in the $100,000-$500,000 category, a quick in-and-out job for project coordinator Geoff Shaw.

Shaw explains that he was headed to a conference when he stopped to pick up for flowers for someone in the hospital.

“I know the people who own the shop,” he says. “One of the women who works there asked if we’d be interested in installing a cutting garden that could be used for commercial things.” 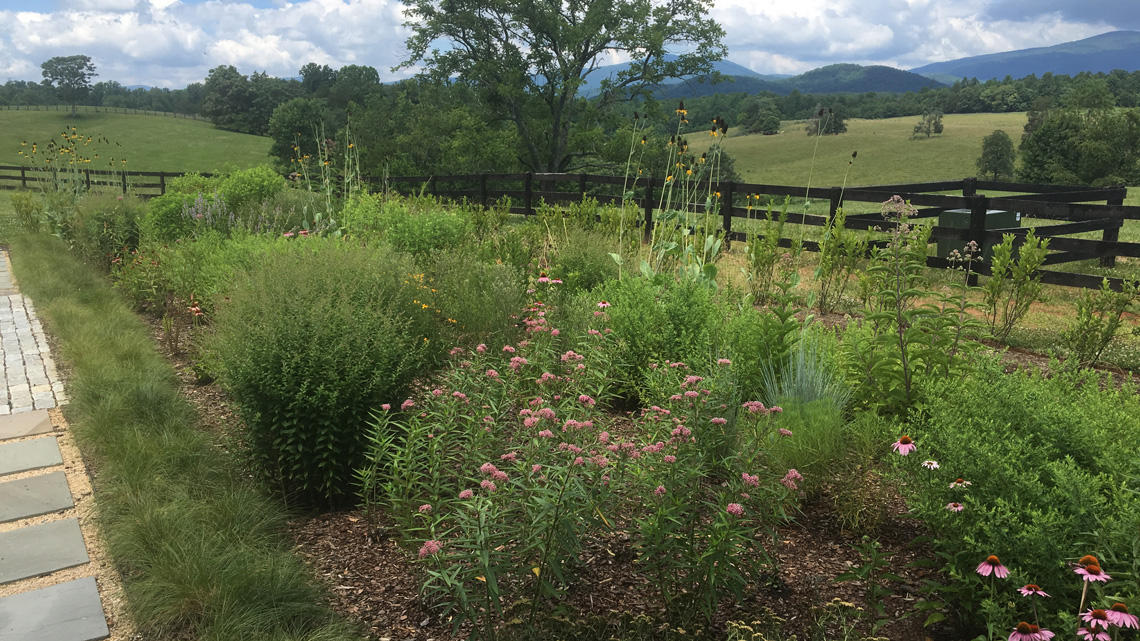 Shaw went out and looked at the property, based in Charlottesville, Virginia, and what he found was basically a blank slate. It had a large barn, with the house built into one side of it. The landscape, such as it was, consisted of one crepe myrtle tree.

“I looked at the property and everything it would take, and I said, ‘I think you need a landscape architect,’” Shaw relates. “At that point, I introduced the client to Mary Wolf of (locally based) Wolf/Josey Landscape Architects.” 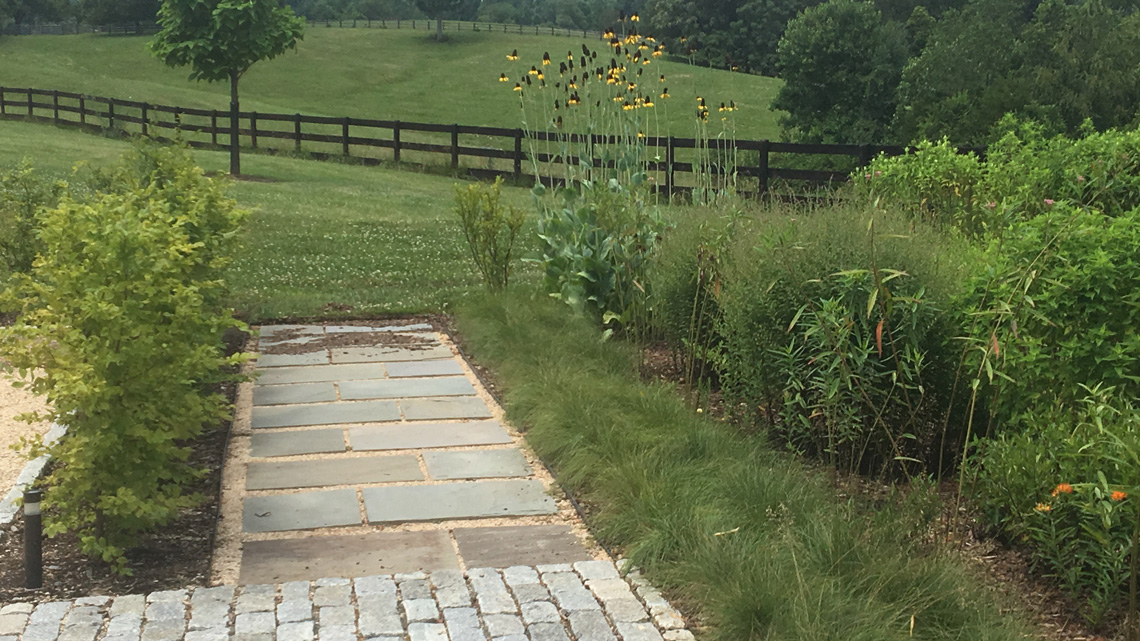 “She said, ‘I’ve finished the plans for the Monte Vista project, and I’d like you to look at them,’” Shaw says. “That’s how it happened. It’s unusual to have a job happen organically like that.”

Although the job encompasses only three-to-four acres around the barn, Shaw says it’s part of a much larger property.

“It’s a really big building, and to make the whole thing functional from a landscaping standpoint, it required a lot of work around the entire exterior of the building,” he says. “That’s where we came in.” 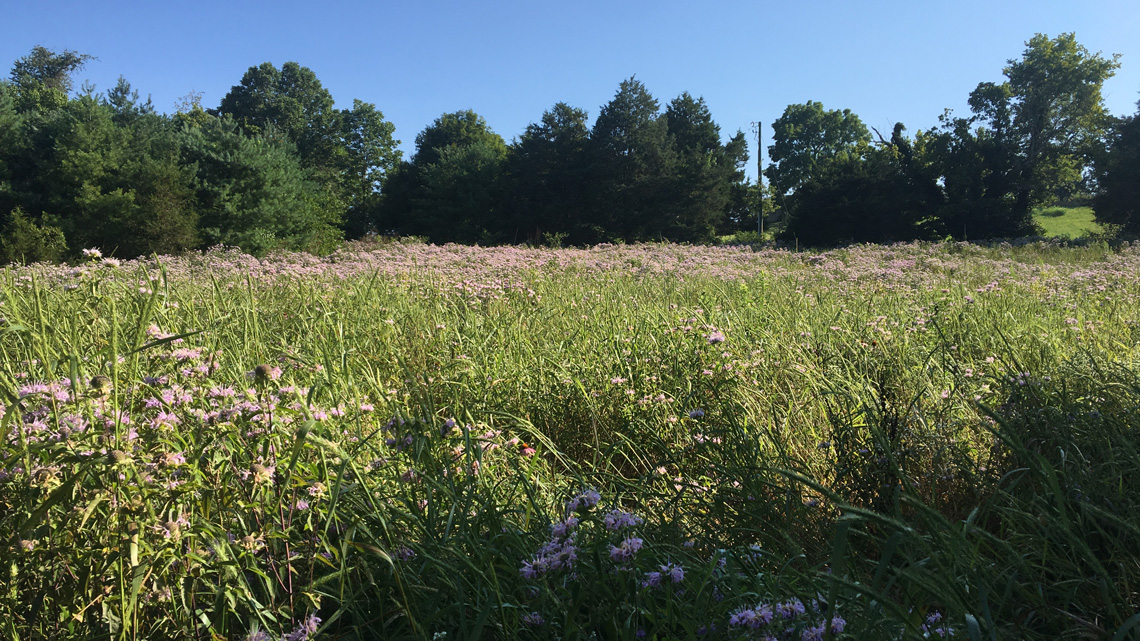 A major component of the job was excavating around the barn. Shaw says the site was relatively flat, but needed help with drainage. He says the excavation of the site alone cost more than $100,000.

“There was a pretty substantial amount of earth moving,” he says. “Everything behind the walls is either fill or cut or a combination of both.”

However, in the end, the site includes a ramp that leads to one of the doors, with much of the area contained behind more than 100 linear feet of poured concrete retaining walls. 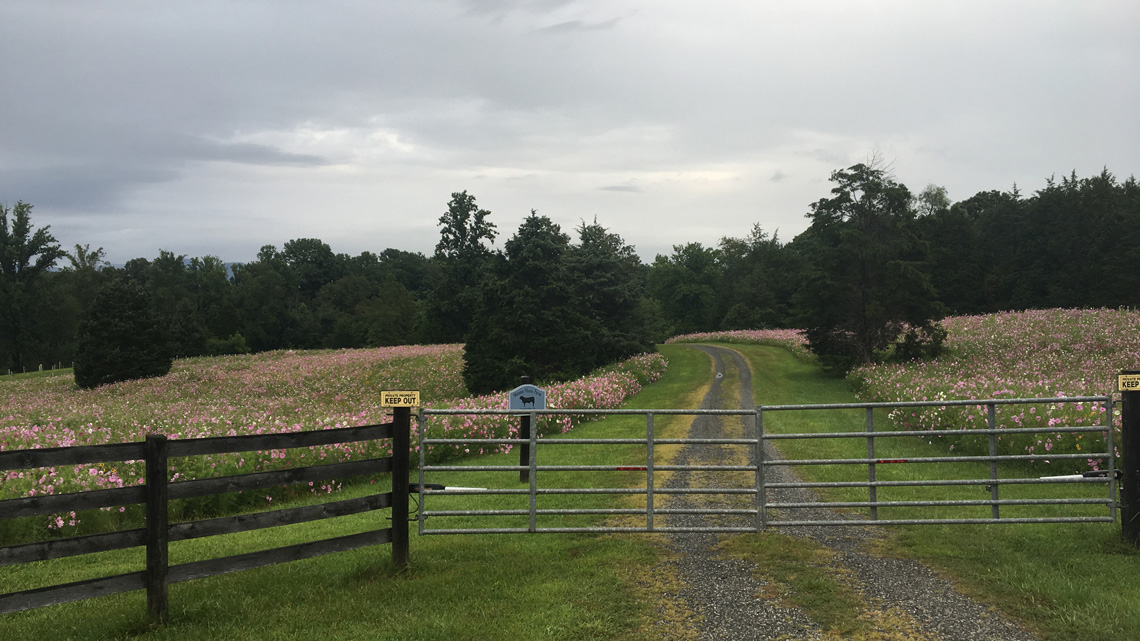 “With some of them, to get deep enough, we had to go more than six feet deep,” he says. “Some of the walls have two feet showing, but four feet underground.”

That excavation also provided the job’s biggest challenge. Shaw says, quite coincidentally, one of the walls is right on top of the buried power line.

“It’s hard to dig a footer on a buried electric line,” Shaw says. “The guy on the backhoe was using it to scrape, and when it got down to the tape, he stopped. It was very tricky.”

He adds that the walls are followed with cobblestone thresholds and bluestone paving, as well as five-inch steel edging. 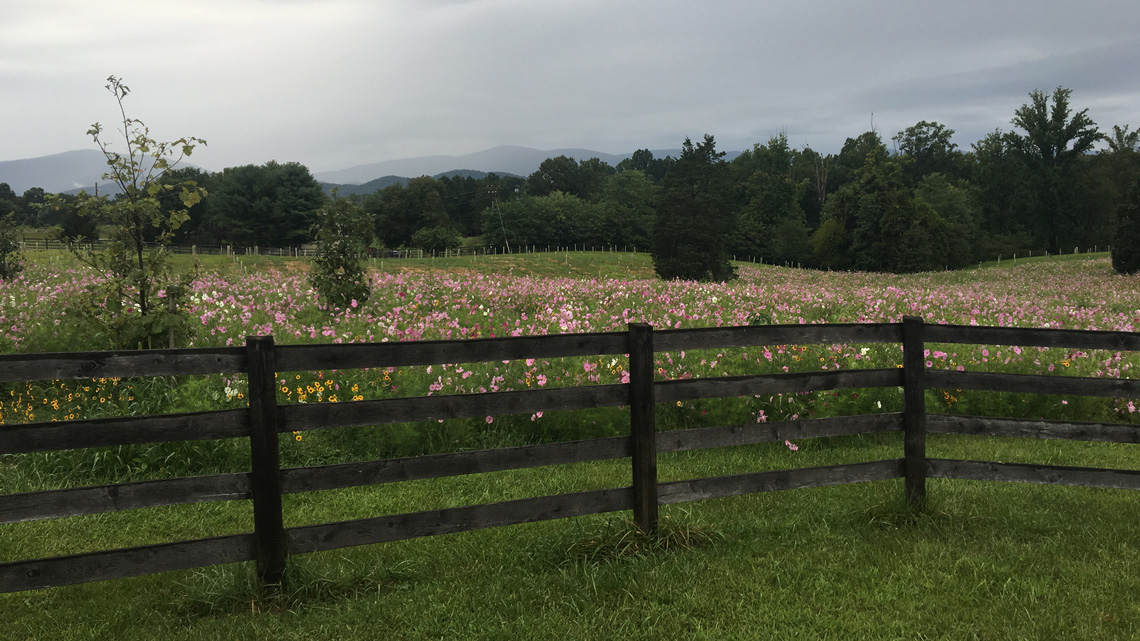 As for the drainage, Shaw says the biggest problem wasn’t the site itself as much as all the water coming off the roof of a large structure.

“We didn’t do extensive French drains or anything like that,” he says. “On the house side there are some 10-inch pipes that drain water from the roof out toward a creek.”

The other hardscape aspect of the project — lighting — was outside the scope of the J.W. Townsend contract. Shaw says the site now has heavy-duty down-lighting fixtures set in concrete bases.

Under the guidance of Wolf, the softscape aspects of the project grew well beyond a simple cutting garden.

“Mary Wolf and Paul Josey used a lot of native plants,” Shaw says. “Under the one remaining tree, we had to use an air spade to loosen the soil. And, we put in about 8,000 square feet of sod. Then, at the entrance, we put in 14 October glory maples, some northern catalpas, two magnolias, and two four-inch caliper northern red oaks.” 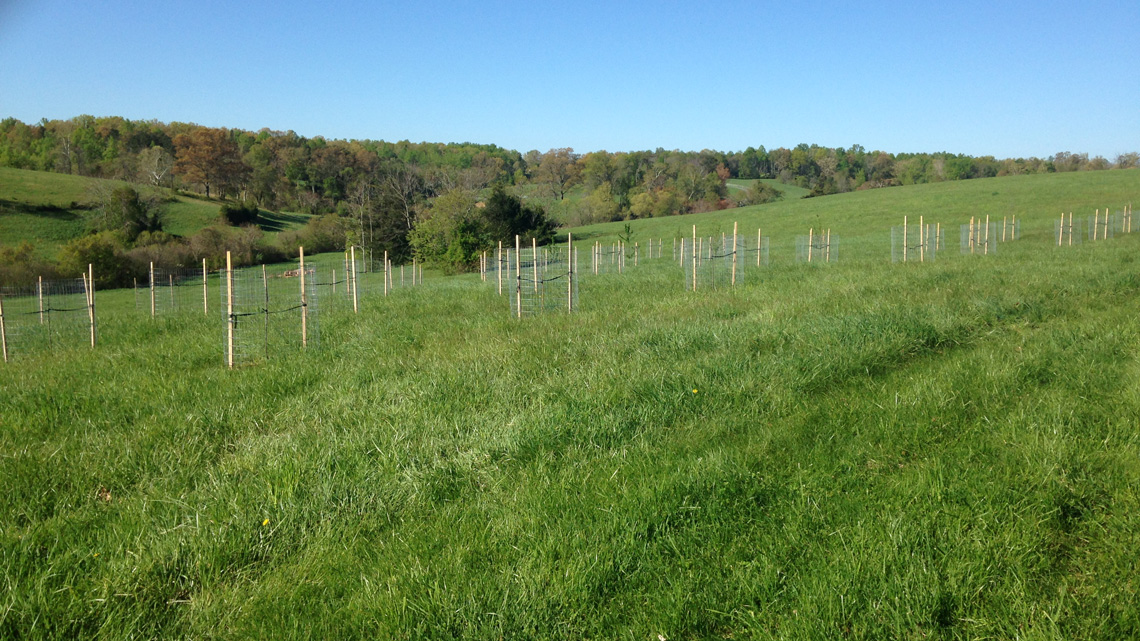 Boxwoods and 125 European hornbeams provide hedging and then, for ground cover, the company also planted 1,500 little bluestem and 1,953 sporobolus.

“It fills a big area, but it fits the scope when you’re doing the math like that,” Shaw says. “We had to be very careful how we prepared the soils and stayed away from fertilizer to not make them too rich and subsequently make the grasses suffer. I think that’s why they’ve done so well.”

The final piece of the initial puzzle for the property was the installation of a fruit orchard which includes 18 apple trees, 12 pear trees, and six each of plums, peaches and cherries, set out in rows of six.

“We built temporary cages to go around each of the trees to protect them from deer,” Shaw says. “They also have an above-ground drip system to provide some supplemental water. We get dry enough that if you don’t irrigate fruit trees in July and August, they’ll drop their fruit.”

However, no below-ground irrigation was installed on the property at the preference of the owners. Shaw says that’s partly because the property runs off a well. And, while J.W. Townsend supervised some watering to help get the plants established, the goal is to be water efficient.

The clients have liked the job done for them so much that the company was later called back to plant blueberries on the property. Additionally, Shaw is currently coordinating the installation of a seven-acre wildflower meadow.

“That’s still getting water but it was planted this spring,” he says. 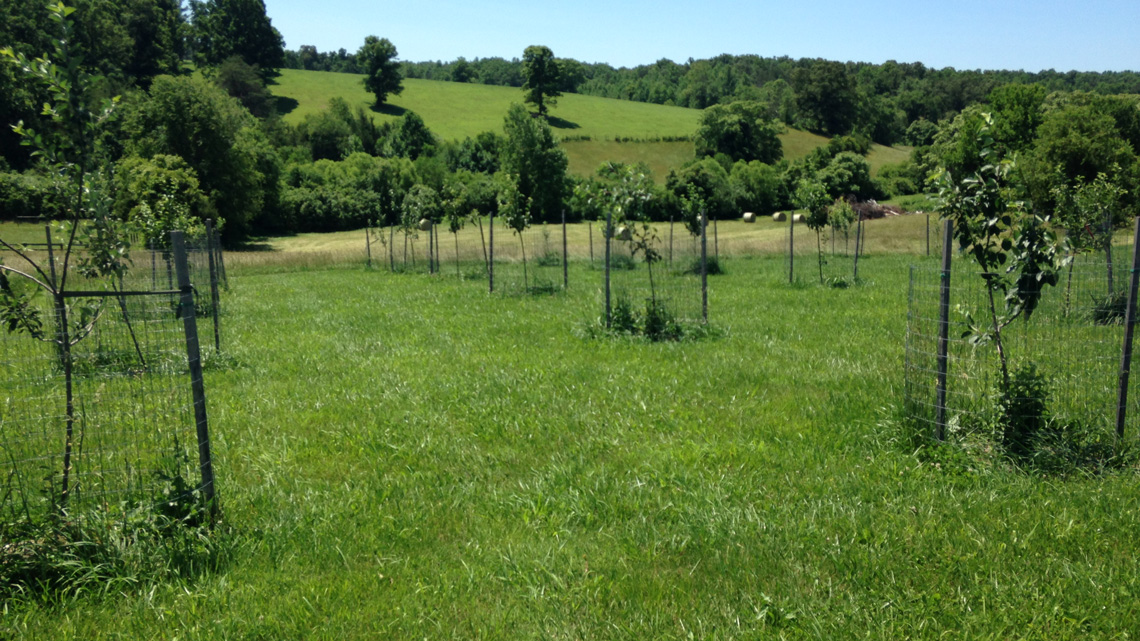 Ultimately, he says the J.W. Townsend crew hopes the clients decide to build a house and the company will end of landscaping that.

In the meantime, Shaw says there’s a lot to like about what’s already in. His personal favorite is the work done around the barn – and the plantings.

“I like the front of the property with the hardscape of stepping stones and the steel edge,” he says. “And, I love the meadow. Mary’s vision of that was very intentional. The plants were very intentionally placed in groupings and we’ve had to do very little manipulation of them. Her vision for the long-term is breathtaking.”

In fact, he can’t praise Wolf’s plan enough. He says crews began on the job in the spring and wrapped up by Christmas, despite having as many as 20 people on the site at times, and dealing with multiple subs.

“I’m most proud that from a project management standpoint, and because the plans were so well done, we were able to come in, start the job and move through it in sequence and have it come to full fruition in a few months,” Shaw says. “It’s nice to move smoothly from start to finish without any major hiccups and come out with a beautiful final product.”

However, he adds, it also taught him the importance of logistics. Planning in advance is what made this job a success.

“It’s been a great property and a great place to work,” Shaw concludes.

Tags: National Association of Landscape ProfessionalsStory of a Landscape

Next post GIE+EXPO 2017: The 7 Key Roles of A Landscape General Manager Or COO