Story Of A Landscape: Enhancing Landscape For Client’s New Home

This repeat business is "bigger and better" the second time around.

There’s nothing like a happy client to bring in a bit of repeat business, and with the Case family, Escondido, California-based PCA Summit Services had just that.

Summit Services had designed and installed the landscape for their previous home, and designer Pete Atkins says an aerial view of that property — shot by a drone — helped clinch an immediate sale, “so when they moved into this house they gave us a call.”

They also gave Atkins a big palette on which to work – he estimates approximately 10,000 square feet – and a desire for many of the amenities on which Californians dote, including two shaded outdoor pavilion areas, an outdoor kitchen, pool, spa, fire pit and putting green. 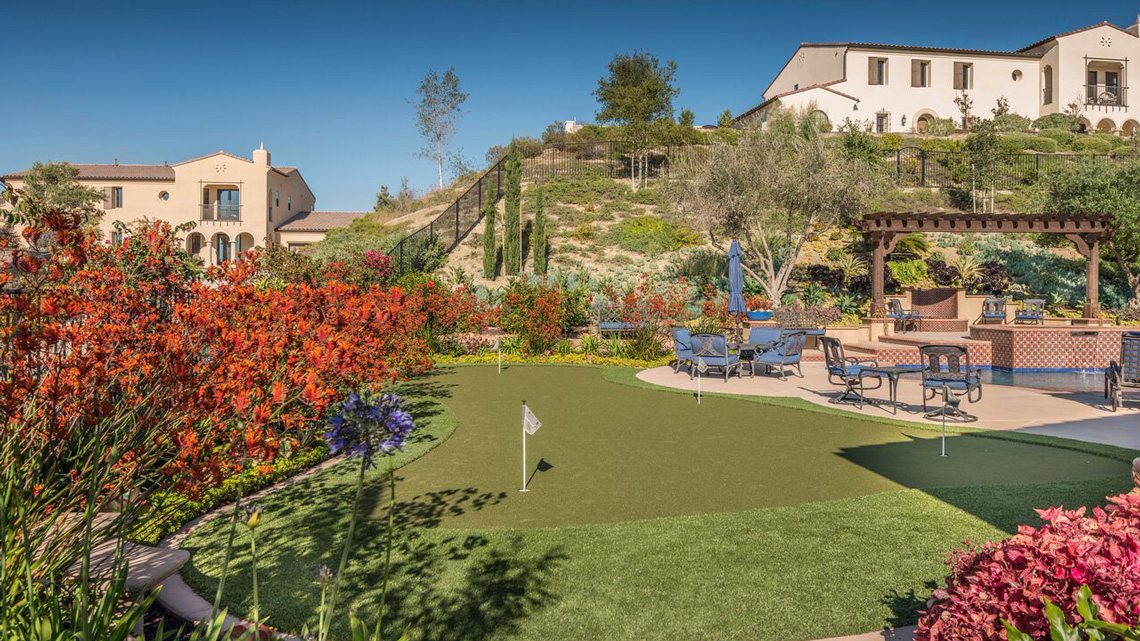 Of course, water use was also a concern, and the plant palette is designed to thrive while being watered as little as three times per week.

Certainly, the centerpiece of the project is a pool, designed by Summit Services and installed by Mission Pools, also of Escondido. As with the patios, the pool decking is a mix of colored concrete and 12- by 12-inch mission tiles.

“We used the tile as accents or medallions, if you will, in the paving,” Atkins explains. “We also incorporated our concrete control joints off the corners of those medallions so that when the concrete’s poured and scored on finish, there’s a rhythm to it. It’s not just to mitigate cracking, but to make it look decorative.” 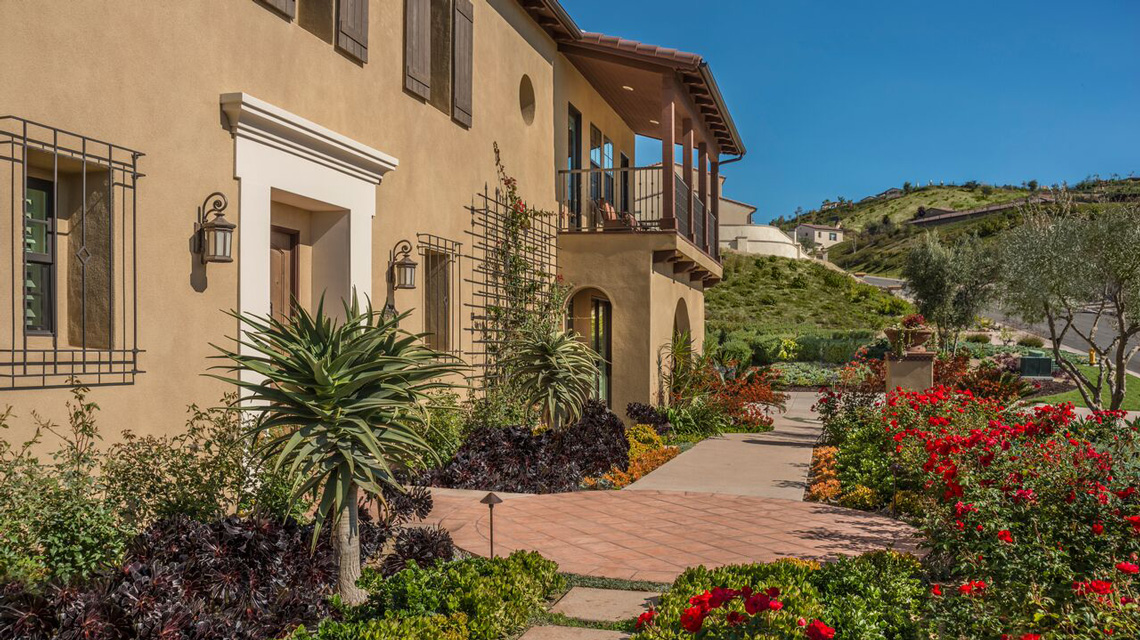 The elevated spa adjoins the pool and spills into it, with a fire pit area behind it, and a seating area. The spa itself incorporates the tile and is capped in a bullnosed mission-style coping. Controls for the pool and spa share space with a large run for the family’s dogs.

The seating area has an arbor constructed of two large posts that span the space, creating a cozier environment and tying it architecturally to the other elements of the house. The area also incorporates some of the seating/retaining walls that Atkins built into the project.

He compares the backyard to a bowl. 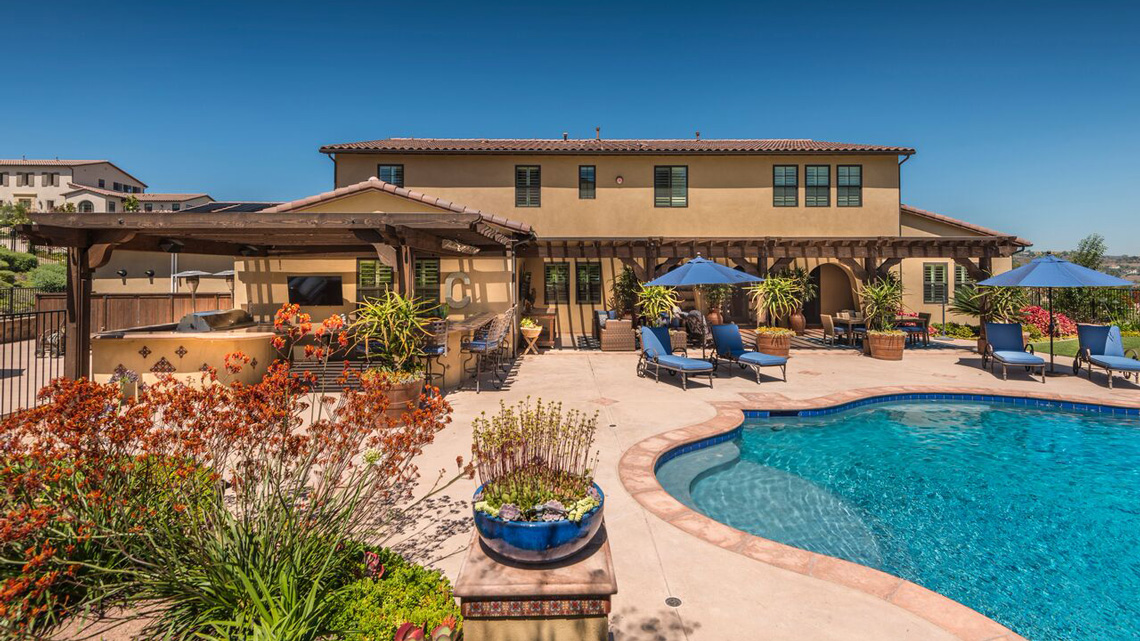 “As we got closer to the bottom of the hill, we stepped up with elevations on the back of the pool and then walls to encapsulate it,” he says. “You look at the seat level walls and the backfill, and it integrates with the base of the hill beautifully.”

Drainage for the backyard makes use of the retaining walls, as well, since the areas behind them are all French drains which pass the water into a hard pipe system which drains to the street. The system drains the deck areas, the roof gutters and the planting areas.

Atkins says the pool area is his favorite feature in the project.

“The whole pool environment is pretty special,” he says. “I love the combination of colors and the spa. At night, it really comes to life with the lighting.” 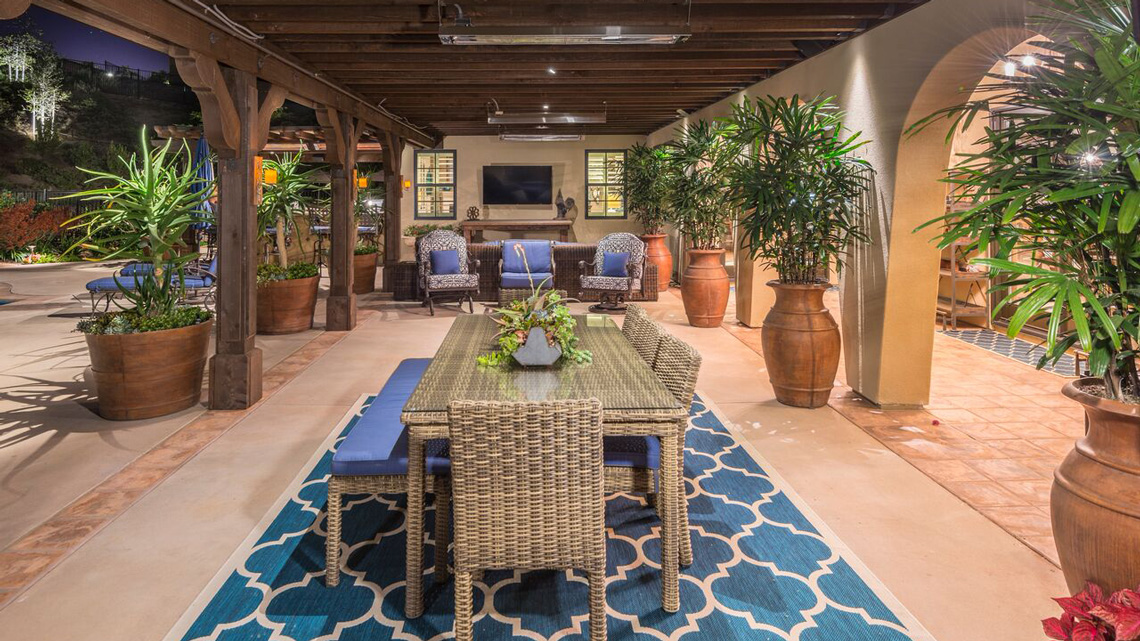 Because of the clients’ desire to entertain, the project also includes two pavilions attached to the rear of the home.

“They wanted some big gathering spaces for seating for big, long tables,” says Atkins. “We went through a variety of different options for them, and settled on a really heavy beam-and-post-type structure. We then used a wonderful vinyl-encapsulated shade cloth that’s double stitched into an aluminum track that’s then screwed into the wooden frame, so the fabric is stretched taut.”

Not only does it give the illusion the fabric is floating, but it provides 90 percent sun protection, but allows a bit of moisture to pass through. It also cuts down on the amount of lumber that must be re-stained. 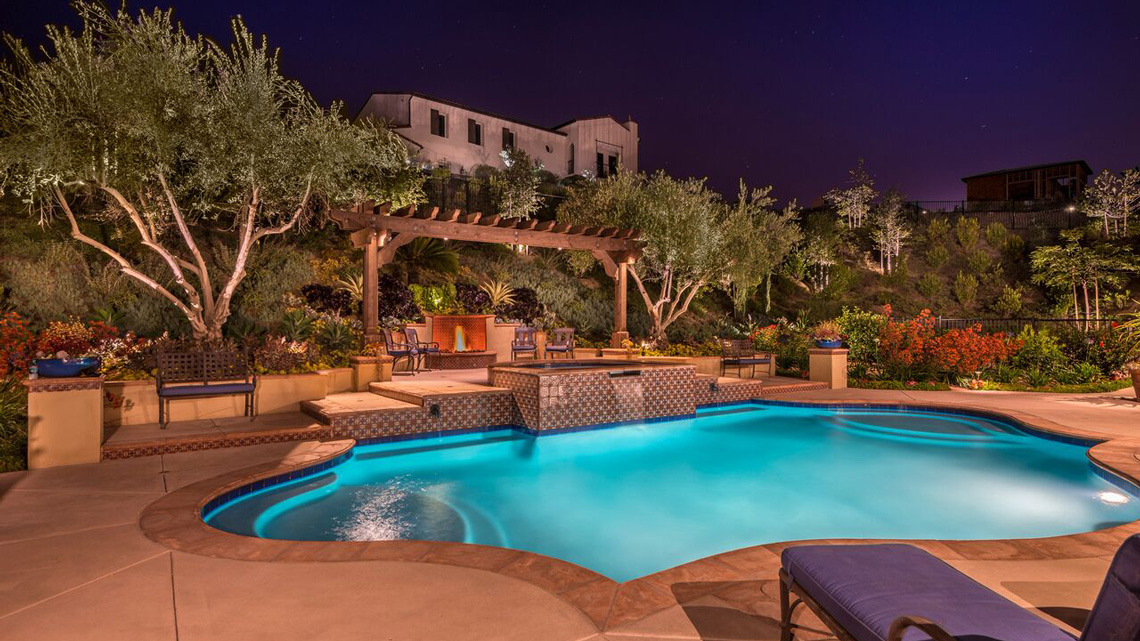 While one area is designed specifically for seating, the other includes the home’s outdoor kitchen area, which includes a refrigerator, beer tap and grill, as well as poured and polished concreted countertops. The flooring in both pavilions is more of the concrete-and-mission-tile mix.

Summit Services also did the softscape for both the front and backyards. Atkins describes the front yard as a wedge-shaped slope that’s short on one end and tall on the other. To reduce the feeling of the slope, the company installed some large olive trees that frame the house.

“We then took the straight line away at the top of the slope by building out a couple big columns at both ends and planting a huge red-rose hedge between them,” Atkins says. “It’s now grown into a wall of color. The front slope is a weave of bright-colored succulent ground covers and a few exotic species of palms with some understory bright colored grasses.” 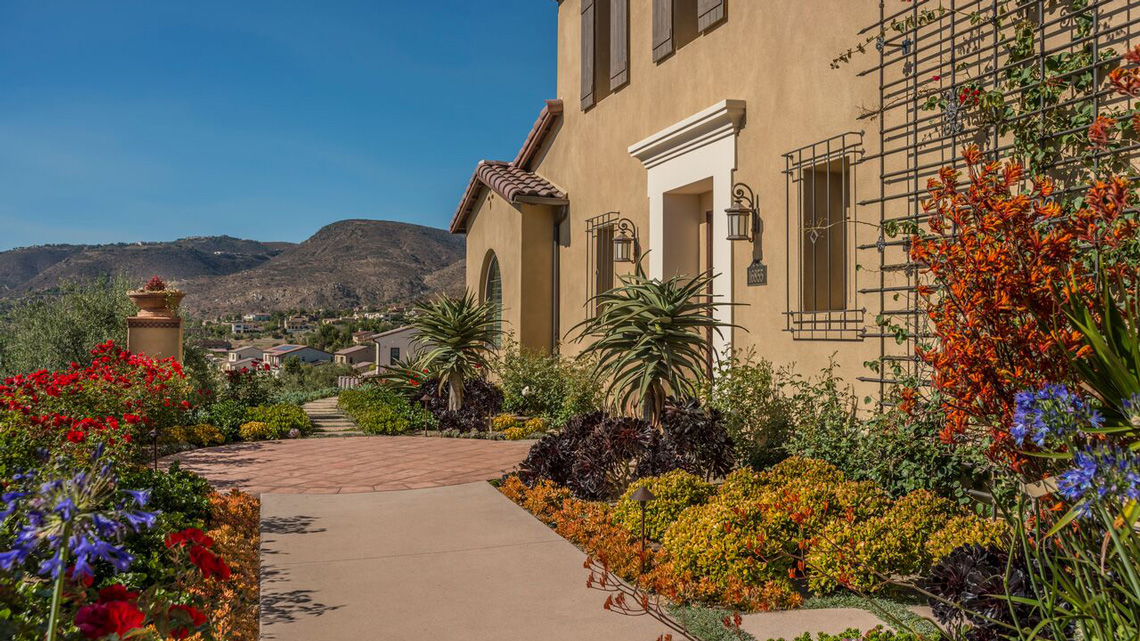 There is a small amount of turf nearest the street, but by being at the bottom of the hill, it receives the natural flow of the underground water.

“It gives it a little texture,” he says of the grass. “We have low water irrigation heads – Hunter Industries MP Rotator Sprinkler Stream Nozzles – that are water efficient. Up by the house, we used drip in the planting beds.”

The front door is further enhanced by a tile entry and a custom iron trellis on which bougainvillea climb. The side yard includes succulents and a couple seating areas.

The same plant palette is carried into the backyard, although rather than natural turf, the putting green utilizes a synthetic product, and Atkins says a putting green is becoming a popular option for people who want a little green in place of a lawn.

Atkins adds that probably the project’s biggest challenge was the soil conditions and designing the irrigation system and the softscape to handle the different sun exposures. 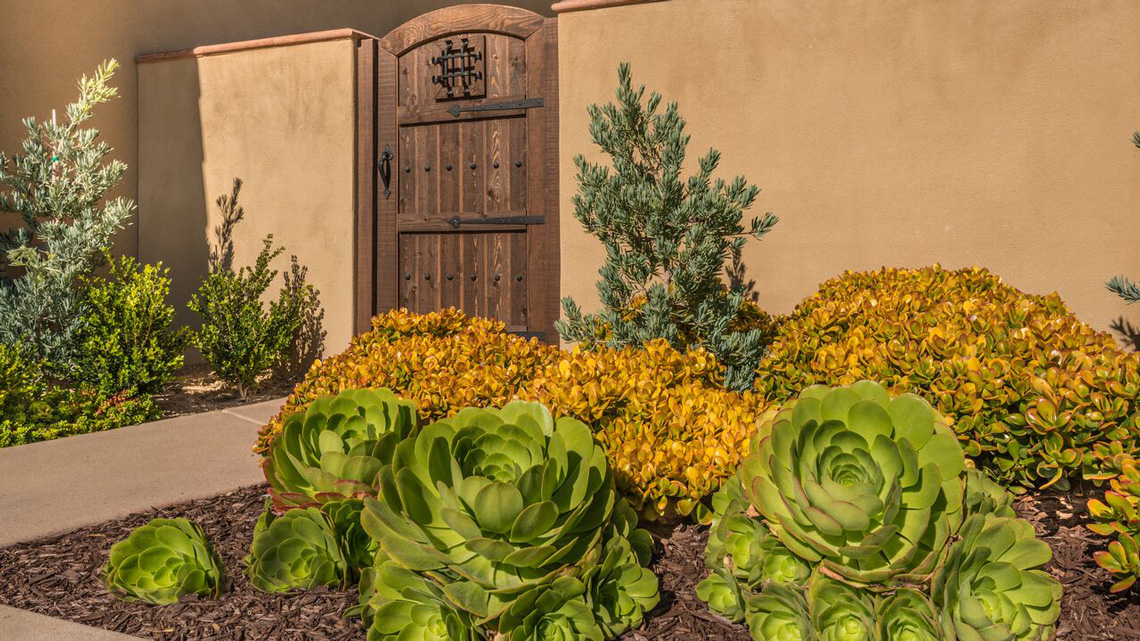 “It’s a typical clay soil and there’s just so much you can do with soil additives and things that like,” he says. “We used organic matter, sand, gypsum and other things to improve the structure of the soil. It’s very easy in clay to overwater.”

As for learning something from this project, Atkins says this job reinforced the need to get the scale right. In this case, he says that meant going with 8- by 8-inch posts and 8- by 12-inch wood beams for the patio covers. 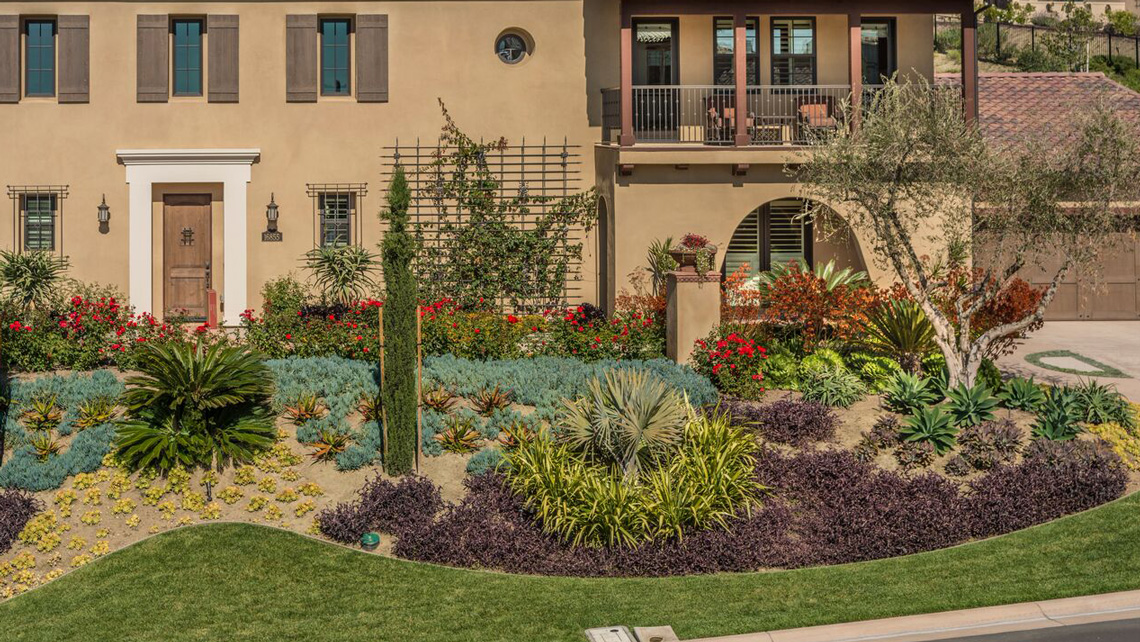 And, he believes, it was all worth the effort. While the project won first place recognition from the California Landscape Contractors Association San Diego chapter in the category of design build construction large, Atkins says he’s most proud of the way the project enhances the lives of his clients.

Tags: Story of a LandscapeWater Saving 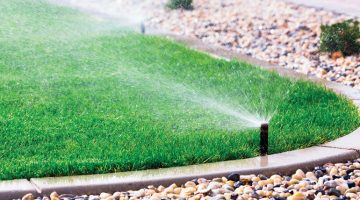