Story of a Landscape: Lakefront Property Gets Euro-Inspired Makeover

A residential project J. Barker Landscaping Company installed in Lakewood, a community west of Cleveland, Ohio is certainly a project that keeps on giving – both to the owners and their landscape team.

The property, which includes 120 feet of lakefront footage, recently won a merit award for Residential Landscape Maintenance from the Ohio Nursery and Landscape Association, and no wonder. Designed to achieve four-season interest, it requires two-to-three days of maintenance weekly from a crew of two.

In its own way, the 2015 job was initially a gift to J. Barker, as well. Brandon Barker, the company’s commercial operations manager, explains the firm got the job based on the recommendation of one of the property’s neighbors.

“They had moved from another city in the Cleveland area,” he says. “The neighbor believes we do excellent work so she recommended us to this client.” 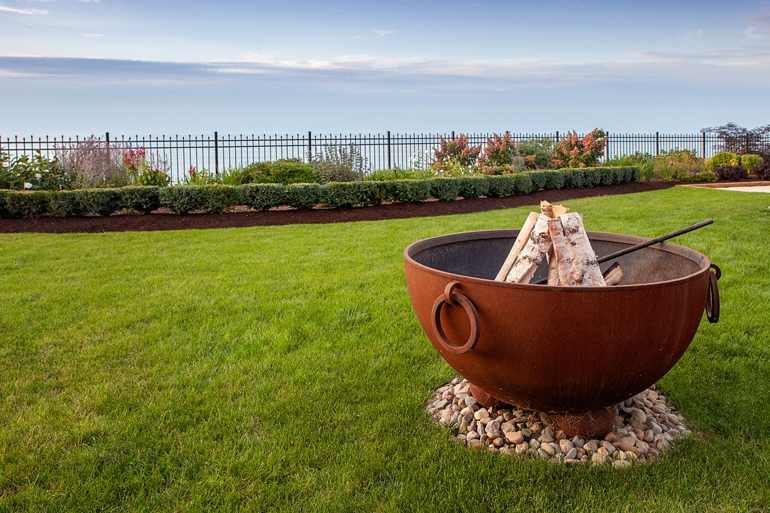 The job called for a renovation of the entire landscape that appealed to the homeowner’s passion for European design. For that reason, the project manager incorporated a mix of evergreen trees, boxwood hedges and broadleaf shrubs, as well as ornamental trees, hydrangeas, roses, perennials, annuals, and more than 900 tulip bulbs imported from Holland.

“These are not something you’re going to find at the local garden center,” Barker says of the tulips. “They were specialty bulbs we imported through a distributor, which gives a unique touch.”

Nor is that the only thing unique to the property. The owners also requested – and J. Barker installed – a pétanque court. Barker explains the French bowling game is similar to bocce. 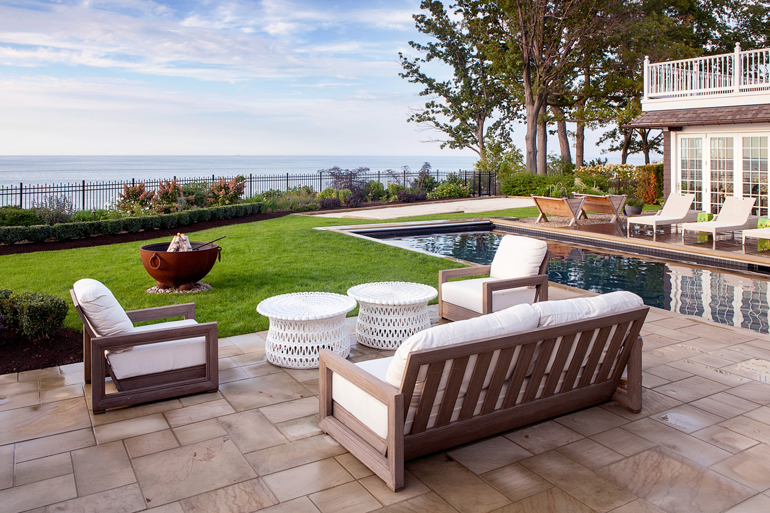 “It’s the first time we’ve installed a pétanque court,” he says. “It’s filled with crushed oyster shells with sandstone providing the border. We rake it out for them when we do maintenance and occasionally fill it with more oyster shells.”

Although his company often does perform hardscape work, in this case Barker says the pétanque court was meant to complement the existing hardscape on the property, which includes a pool, sandstone decking and a sandstone patio.

“Our job was to put in the lighting, the irrigation, the pétanque court and, of course, all the plantings,” he says. “The pétanque court is located adjacent to the pool, with Lake Erie as the backdrop.” 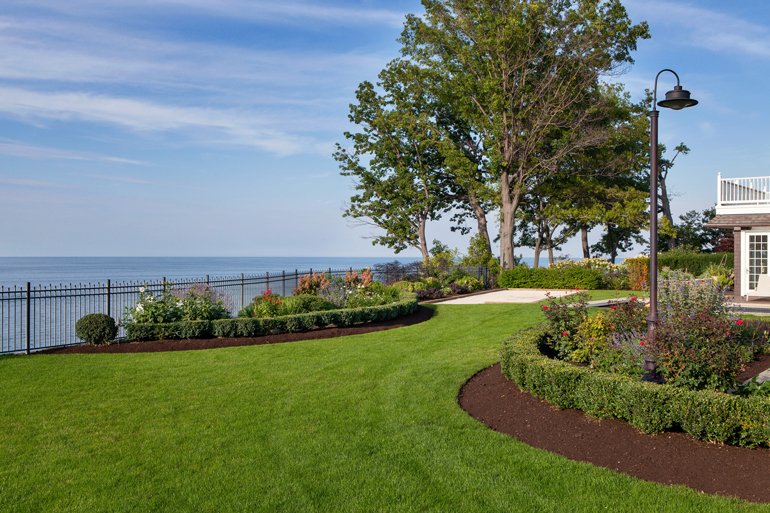 The irrigation system for the property includes 104 pop-up spray heads, 30 gearheads and 15 zoned valves. In addition, the maintenance crew often does hand-watering for plants that need special attention including a trough garden for herbs, peppers, tomatoes and similar vegetables.

The lighting is an LED system that features accent lighting to showcase some of the plantings.

Because the site centered on an existing home, Barker says there really wasn’t a lot of grading involved in the project, with much of that centering on preparation for installing the pétanque court and planting an entire new lawn.

Work began at the site late in 2014, and soon ran up against what Barker calls the biggest challenge of the project. After starting the landscape work, the clients decided to have the existing garage razed and replaced with an enlarged five-car garage and pool house that required some redesign and relocation of plants to accommodate the new structure.

“Working around that became a challenge,” Barker says. “It came at a time when we were trying to get certain plantings in and finish aspects of the project with winter coming.” 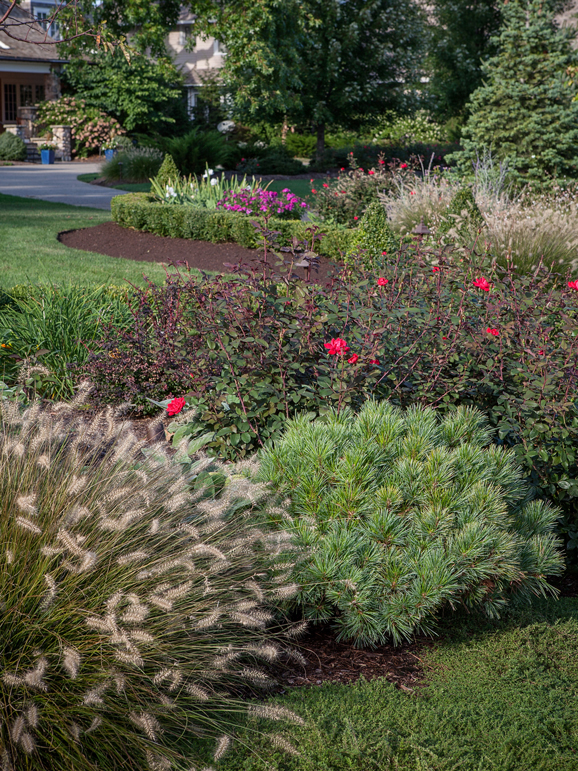 However, the overall success of the job has given J. Barker Landscaping plenty to be proud of, and plays into the company’s overall philosophy, he says.

“We took a lot of time with the project and put a lot of effort into it,” Barker says. “We’re very detail-oriented and we always like to follow up on an installation. If we can take on any type of maintenance for them, we’re happy to help in the future, as we’re doing here.”

Plus, he says the $100,000+ project has done a lot to develop additional business for the company in the neighborhood. For him, however, it’s all about the plantings.

“It gives me joy when I come through the backyard and see the beautiful perennials and annuals,” Barker says. “When we’re there a little later in the evening and the sun is setting and you have all the beautiful color with the sunset as a backdrop, it’s just very, very beautiful.” 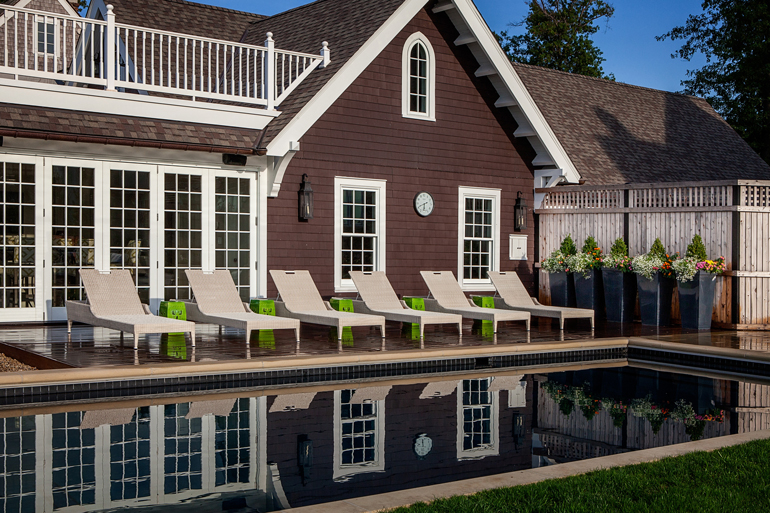 The company definitely plans to enter the landscape in other competitions, Barker says. In the meantime, it’s gone a long way toward developing better teamwork between the design side of the business and the installers, he says, at least in part because of the project manager’s diligence.

“Jobs like this can get challenging,” he concludes. “We typically had a three- or four-man crew out there, and the project manager was out there at least on a daily basis making sure they had the plantings just right, paying attention to the drawings and making sure the project had flow. It allowed all of us to continue growing and working better as a team.”