Story Of A Landscape: Transforming A Neglected Yard In A Historic District

Following guidelines in a historic district can make a landscape redesign challenging.

Lyle Collins, owner of Tucker, Georgia-based Southern Trillium LLC, is all about creating unique gardens, which made him a great match for the Beach family as they renovated the landscape around their early 20th century bungalow.

A cornhole terrace? No problem. The need for approval by the local historical board? Just follow the guidelines. However, that’s not to say he didn’t find the entire site a challenge, and what he found underground even thrilling.

He explains his company got the job on a referral from an arborist friend who had worked for the Beaches at their former residence and been called in to consult on some trees on their new property. 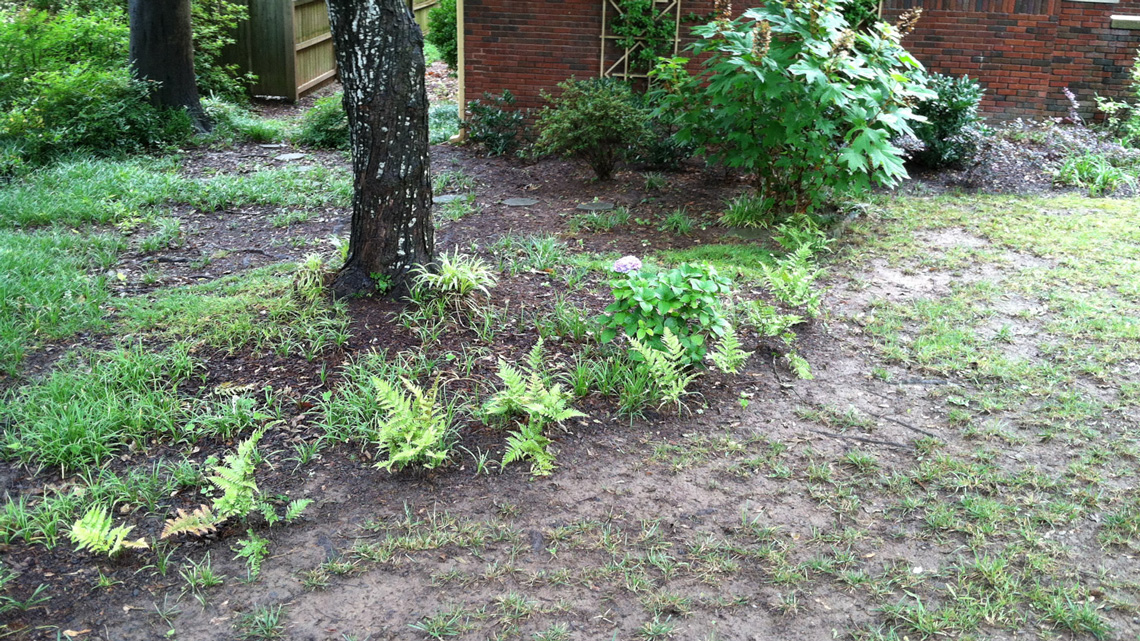 “They bought it and wanted to rework it, and he referred us to them as designers, since we do both the design and installation,” says Collins. “We met with them and they chose us to do their whole property, from the street to the back fence.”

Collins adds that the problems were numerous for the .3-acre lot. Although the house had been occupied, the landscape had been extremely neglected, particularly in the back, which was overgrown with weeds and English ivy.

“The front yard had a few maples, and the arborist had already taken out two trees, but with the position of the sun it ruled out any type of lawn,” he says. “I told them a fescue lawn might work, but they said they were fine without one; they wanted more of a garden in the front.”

Beyond that, their wishes for the front of the home were simple. They wanted a seating area with a couple of chairs, a small water feature and a walkway from the front sidewalk to the front door. Collins could give them two out of three. 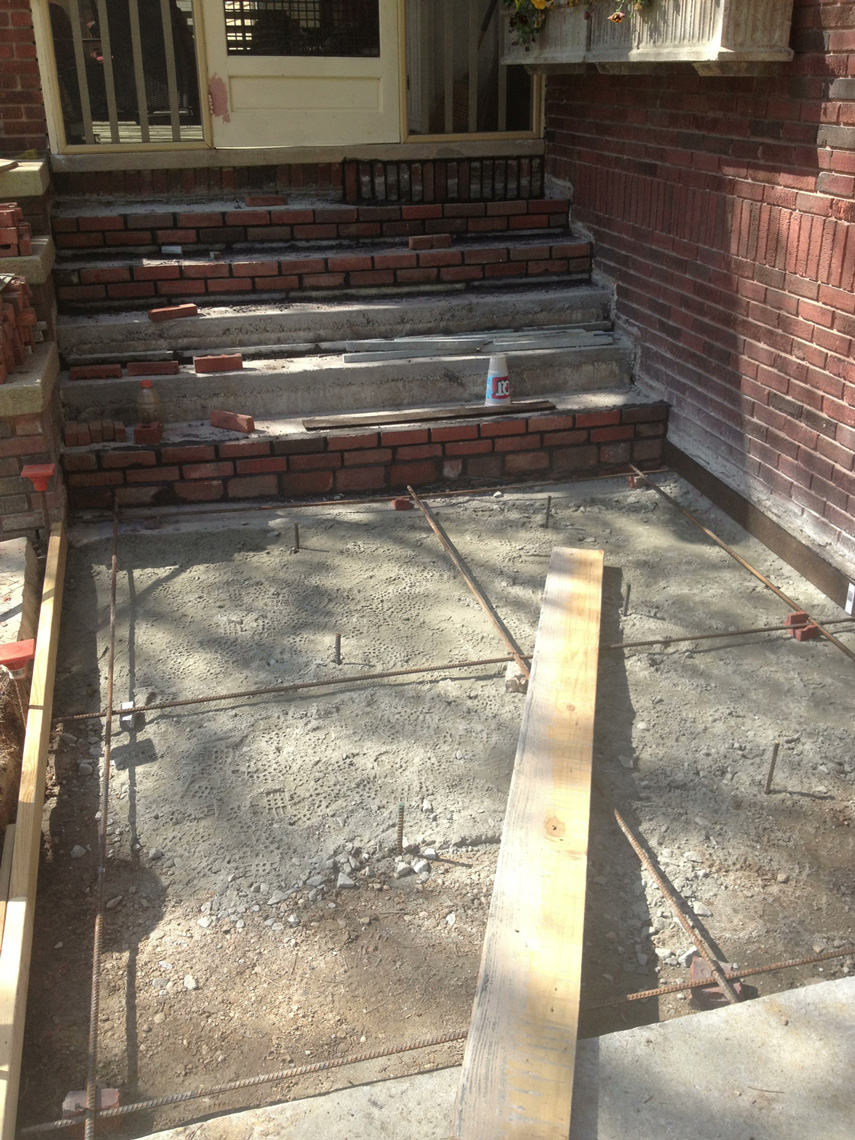 “The house is in a historic preservation district, and everything visible from the street had to be approved by the historical board,” the designer explains. “We worked within their guidelines, but we had to get board approval, right down to the type of stone we used.”

The stone for the seating area ended up being a Pennsylvania-type bluestone. Collins says the historical board required something in the bluish-gray color range, and the other option would have been to use slate. And, for the water feature, he says he was fortunate and found a small bowl-shaped boulder he had drilled out.

“It’s pondless and recirculates a very small amount of water,” he says. “It really disappears, but it makes a small bubbling sound.”

The walkway from the front sidewalk through the seating area to the front door was another story.

“The panel said absolutely not, even though other houses on the street have the walkway to the front door,” Collins says. “Their response was that they’re not historically correct and we’re not allowing them anymore. So, we went down the driveway about 15 feet, then have people step down into the sitting area with a connection from there to the front door.”

For the plant palette, Collins says the owners were interested in low growth/low maintenance plants, so he focused on ground cover with Hydrangeas, some Yew species and Creeping Jenny. He added Dwarf Mondo Grass to the joints in the seating area for more green.

The designer says the clients were also clear on what they wanted in the back. Again, they wanted some seating areas and a firepit. Of importance, however, was a lawn area for family gatherings, as well as a terrace on which to play the game cornhole.

“As soon as we went to work in the backyard, we immediately went into the root zone of some massive trees,” he says. “They understood the competition the shade gave us, so it, too, became gardens and pathways and plantings. We just worked our way through the light conditions in the entire property.” 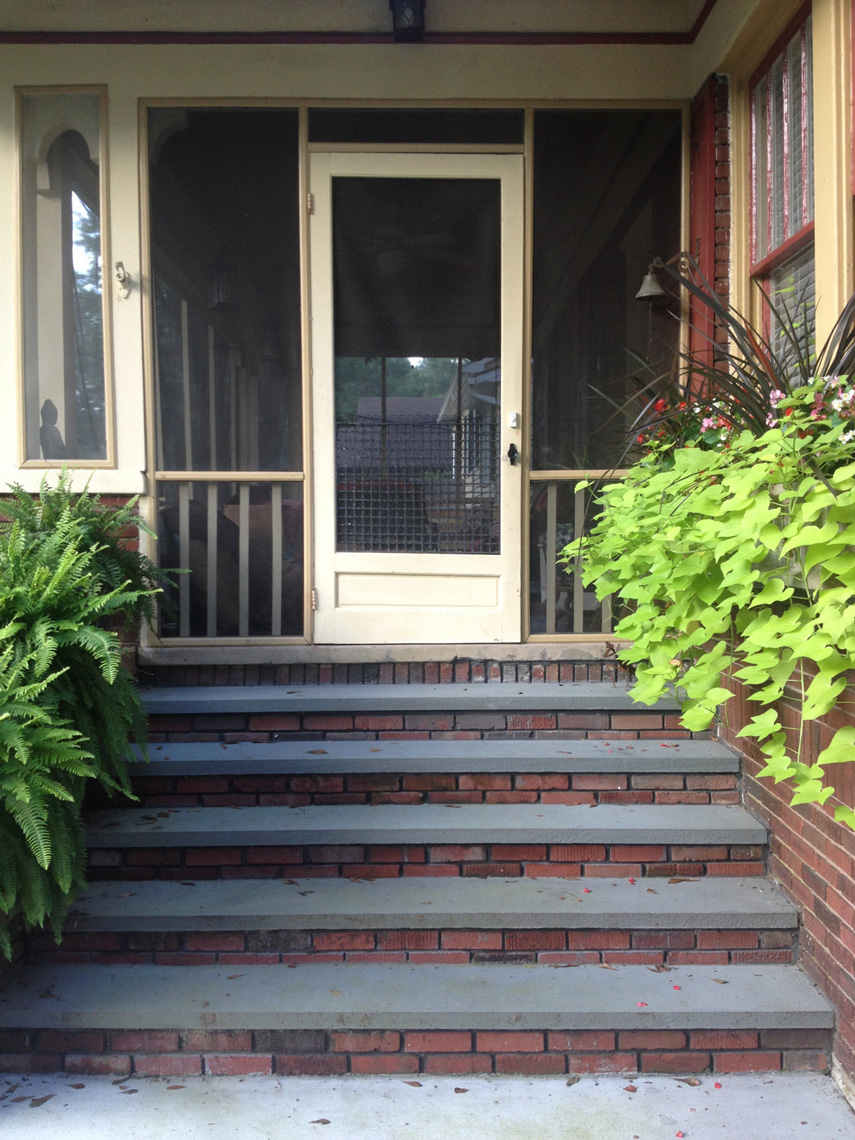 Collins says his favorite feature from this job is the cornhole terrace, which is not only custom, but because of the way the property falls away toward the creek at the back of the lot, it’s hidden from view from people in the house.

“I worked with one of my team members to come up with ideas for where they could have a permanent installation of the cornhole boards,” he says. “The boards are cut from natural stone slabs and we have stone benches on either end. The area is too short to be a regulation court, but we worked with what we had and it’s big enough for them to have fun.”

He also adds this is the first time he’s had a request for such a court.

The main seating area in the back does utilize slate, in a crushed state that’s available from only one Georgia quarry. However, it’s what’s around the slate that Collins finds so pleasing.

“As we dug through the backyard (by hand to protect the existing root zones) we turned up granite cobblestones,” he says. “Granite is local to the Atlanta area, and the previous owners had found others and stacked them under the deck. We used what we were finding and then added to it to make a cobblestone lining, so we were reclaiming material we found on the property and working it back into the installation.”

Finishing off the seating area is a dry-stacked retaining wall made of Tennessee field stone. 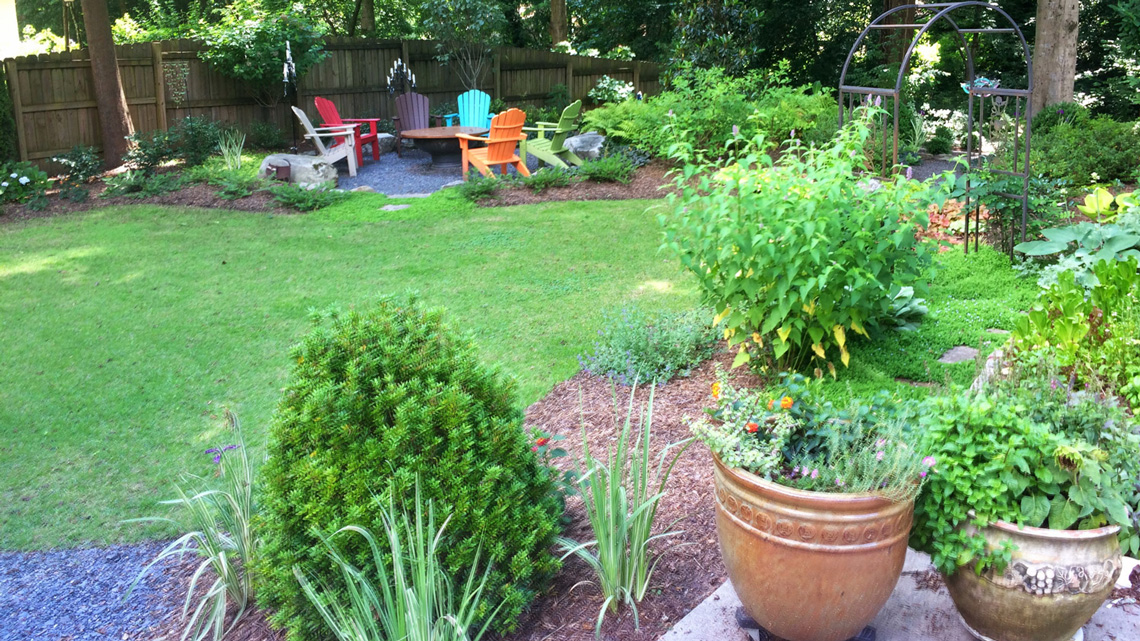 In a similar way, the Southern Trillium crew was able to utilize old brick found on the property in rebuilding the stairs to the front door.

“We sawed the bricks in half front-and-back, so we’d have enough of them, and then we added to them,” Collins says. “You can’t match 100-year-old brick, but we were able to use enough of what we were finding that it looks as if the stairs had been done when the house was built.”

The company’s crew also reassembled pieces of a broken burial stone found on site and incorporated that into the walkway to the creek.

While making use of old materials for part of the project, Collins says another important feature of the job is a modern rain harvesting system. Although the natural slope of the property helps it drain toward the creek, at the request of the owners, the drainage from the roof gutters is captured by a 1,500 gallon tank under the back deck.

“A few years ago, we had mandatory water restrictions, and for a brief time, no outdoor watering at all,” he explains. “Being very environmentally conscience, water issues were important to them.”

Still, it’s the natural features of this approximately nearly $100,000 project which was built in two phases and won both Distinction and Green Star Awards from the Georgia Urban Ag Council of which Collins is most proud. 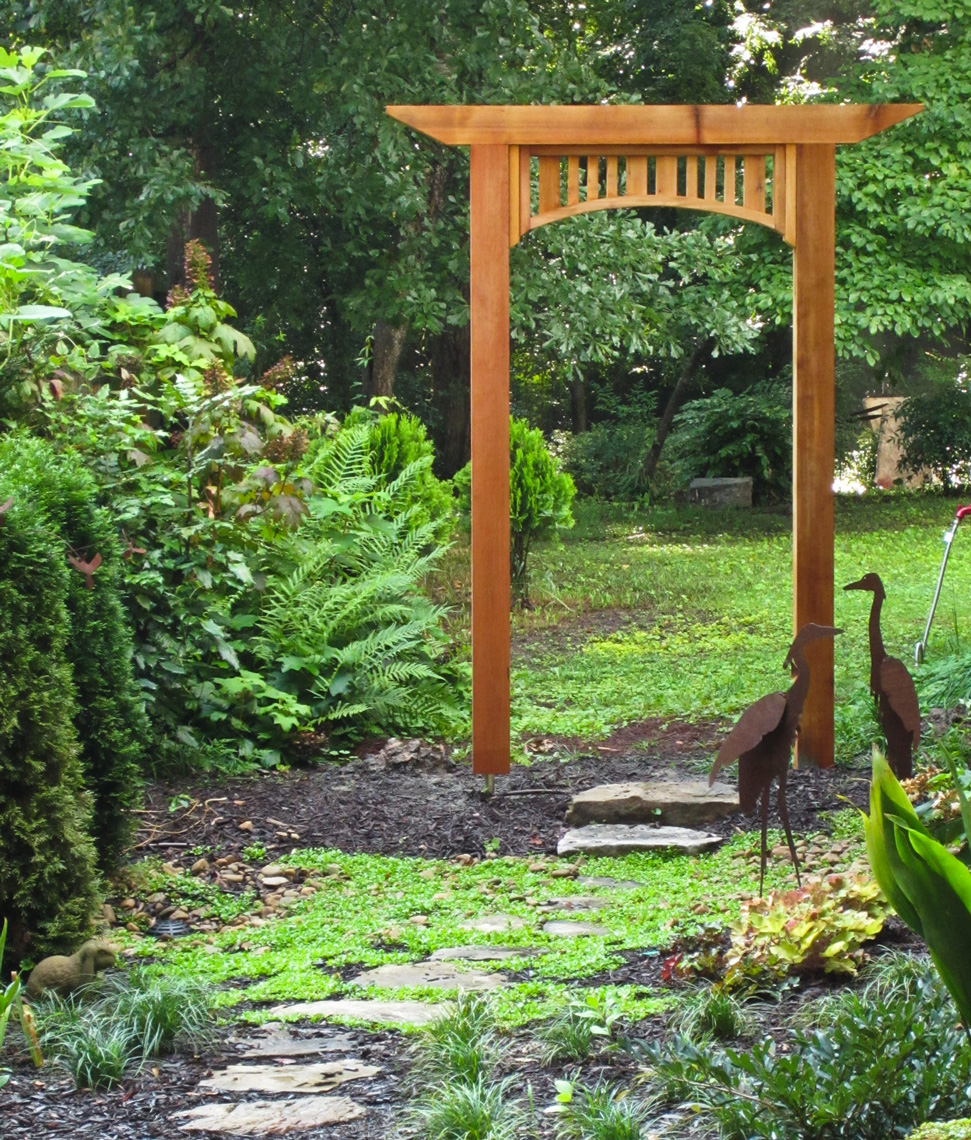 “Being a very small lot and what would normally be considered a tough thing to work with, we managed to create multiple spaces from the front area to the side area and then worked our way back,” he says. “And, we were able to hide each area. A lot of times people want big expanses of space, but here, we gave them multiple areas to enjoy.”

And, despite needing to work with the historical board, Collins says in the end it was the site conditions that presented the greatest challenge.

“There were so many varying conditions on it,” he says. “We had the shade, the trees, the root zones and the changing elevations in the back. The biggest challenge was putting all that into a design, especially when we couldn’t grade the property.”

And, the job also taught him a huge lesson that he is still benefiting from: pay attention to what you’re finding on a site.

“In a newer house, that’s not an option,” Collins notes. “Being on a property that’s been left alone, we were able to find and identify and then utilize these different pieces. Now, when I meet new clients, I ask them if there’s anything piled somewhere and find a way to work it back into the landscape. It makes it much more personal.”