This award-winning, three-phase project was designed to be a garden of hope for a homeowner with cancer.

When landscape designer Austin Parnow initially began working with Glenn and Sandy Meade, he was called in to build a garden of hope. The reason: Sandy Meade was fighting cancer.

“She wanted to turn her home into a respite in which she could battle the disease,” Parnow explains.

Parnow and the team at the Healdsburg, California-based Geared for Growing did their part, starting with the plantings in the front yard and a new front entrance. Another phase saw the installation of a vegetable garden.

Later, after Sandy Meade’s passing, Parnow was called in to improve the circulation around the back of the home. 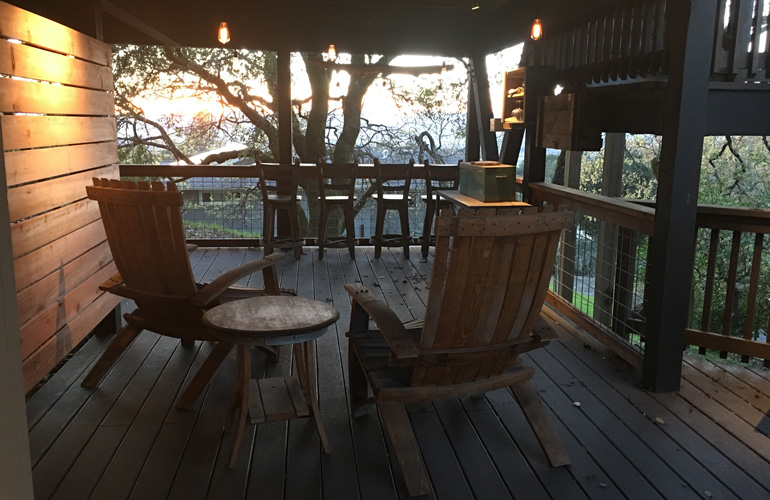 As a final touch to the property, the designer returned later for what he calls a fifth phase of the project, expanding the vegetable garden and the home’s deck as Glenn Meade and his second wife, Monique, added their own touches by created an inviting indoor/outdoor space.

While it might be a somewhat non-traditional client situation, Parnow’s vision and ability to work with all three clients also netted him a nice reward: the approximately $75,000 project was recognized as the Medium Residential Installation of the Year by the North Coast Chapter of the California Landscape Contractors Association.

Parnow explains that initially he found the hillside property didn’t have much in the way of planting.

“In the front, they had some retaining walls and a concrete walkway and entry,” he says. “It’s residential, but it backs up to nature.” 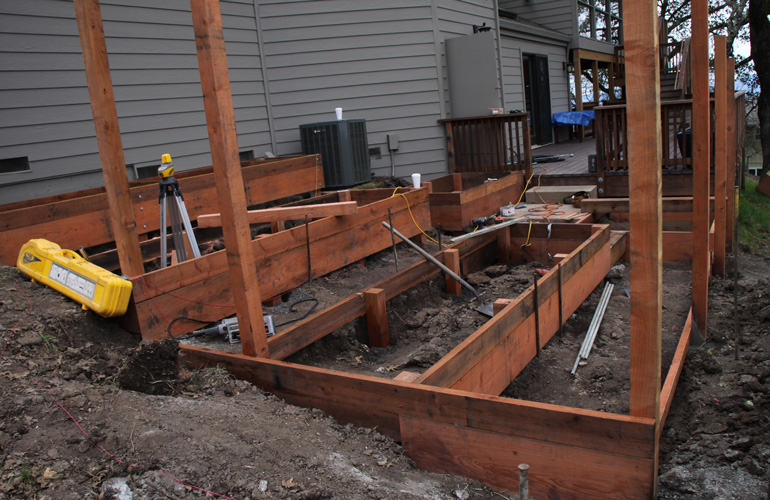 He also knew, going in, that the front area would be broken into two phases.

“Our first phase was simply adding some plantings above the retaining wall because there were not plants to speak of above it,” Parnow says. “The second phase was to create the front entry, which includes pavers, lighting and planting pockets, as well as some screens.”

Now, he describes the front area as being “intimate” and “almost like a backyard.” Part of that, of course, is the fact that at least in that part of the Bay Area, it’s not necessarily a place of formal front spaces.

“It’s a place that’s hidden,” Parnow explains. “It’s a place where it feels comfortable to spend time. There are a lot of intimate little spaces to it.”

The third phase of the project centered on installing a vegetable garden. Being located on a hillside, the garden incorporates planter boxes and a stout fence for keeping the deer out.

“We built the vegetable garden, and when Glenn found out he liked it so much and felt he was hurting for space, we expanded it,” says Parnow. “We really tried to maximize the amount of gardening space he could use.” 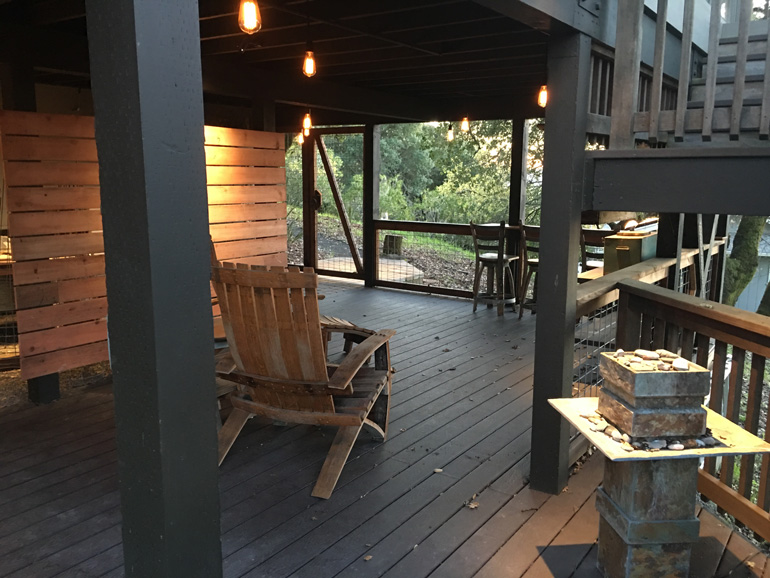 Before then, however, Parnow had been out to improve circulation around the back of the house.

“We put in some pathways to better move all the way around the property,” he says. “Up to that point, it didn’t really allow for that.”

The final part of the job, which Parnow feels is the most interesting, includes the expansion of the vegetable garden and an addition to the lower deck on the back of the house. That was done after Meade remarried.

Parnow explains that the upper floor of the home had an existing deck/sunroom area.

“We extended the deck beneath the upper sunroom,” he says. “What they now have is a downstairs bar located under the shade of the sunroom. They have lighting out there and a bar that looks out over the distant hillsides.” 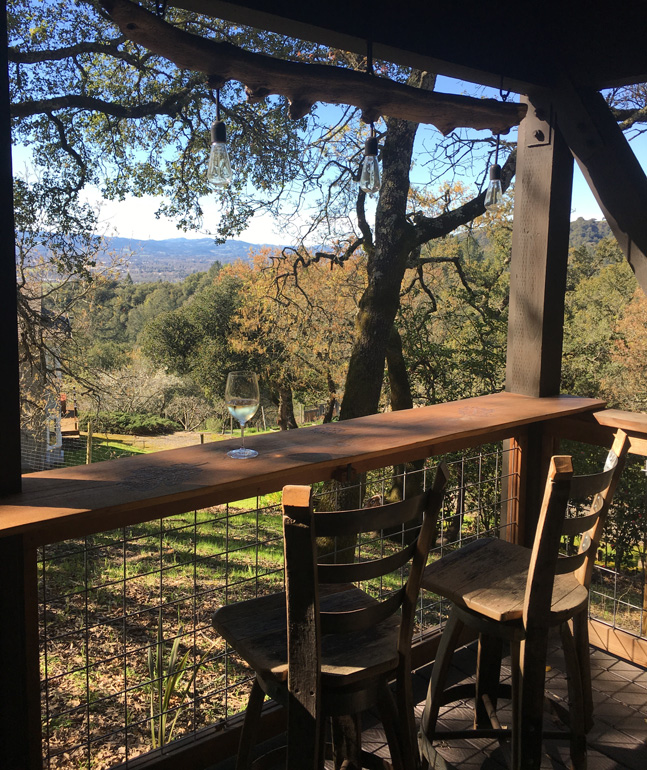 The area also includes seating and a liquor cabinet, and Parnow explains the Meades use the area both for relaxation and entertaining.

The deck proved to be one of the overall project’s biggest challenges. The original deck had been made from Trex Composite Decking, and the company had changed its formulation between when it was installed and Parnow went to spec it for the deck addition, and the match isn’t exact.

However, he says that rather epitomizes the entire job.

“We had to work within the confines of what was already there,” he says. “That was certainly the case with the front yard with its huge retaining wall that we weren’t going to move, and with our ability to put in plantings against the footing. We had to create a custom drainage system to allow us to plant over the footings, but we worked with what was there.” 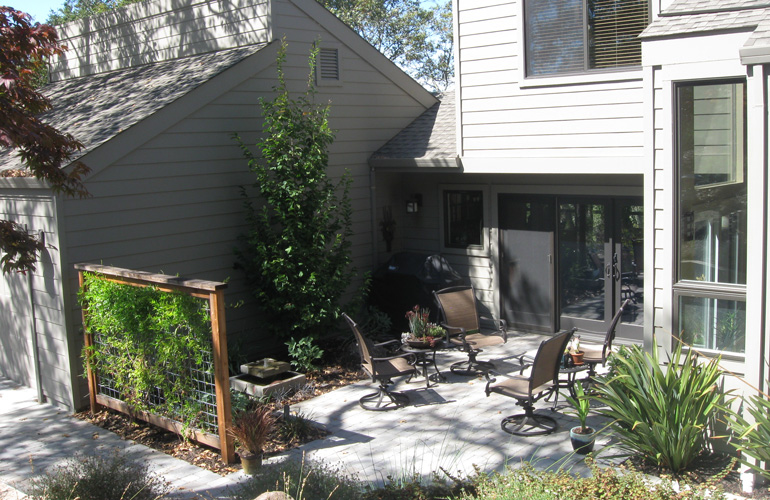 The other big challenge was the deer. Not only is the vegetable garden fenced against them, but so is the lower deck.

“We used a lot of natives and deer-tolerant plants in the front,” Parnow says. “But, some of them didn’t necessarily end up being deer-tolerant at all.”

Despite the various hurdles, Parnow is justifiably proud of the total job, which he says took from two weeks to two months per phase and over time utilized at least three of Geared for Growing’s five foremen.

He’s most proud of the sense of serenity he feels the property exudes.

“The entry is welcoming, and it’s a place to feel comfortable,” he says. “It’s also a place with lots of intimate little spaces and I like to work those into my designs.” 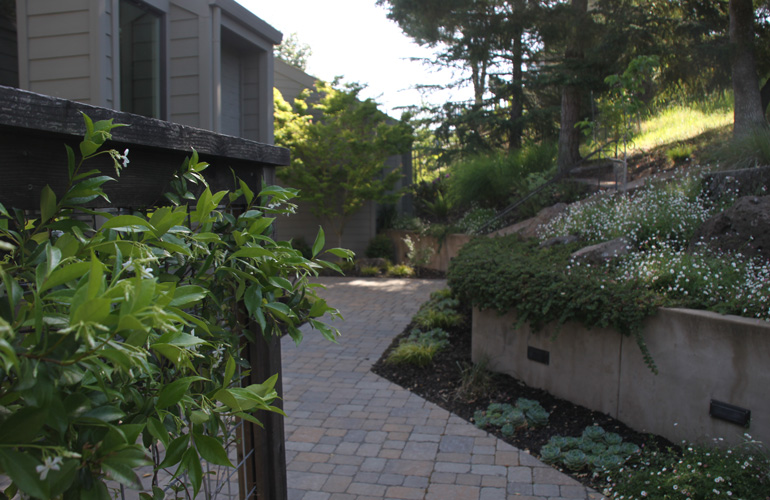 Even more, he’s pleased with the collaboration the job entailed with the clients. He calls them “wonderful” and interested in collaborating, which made the job fun.

“The best thing I’ve learned with this job and many others is there’s a bell curve regarding client involvement,” Parnow observes. “If the client is disinterested, the job is likely to be uninteresting. Too much client involvement can lead to clashing of heads and an unhappy process. But, when clients want to express themselves in their landscape and at the same time trust you to do your job, often both parties end up very satisfied with the partnership and the results. This job is a representation of that.”

Previous post Get an Exceptional Rating for Customer Service