Story Of A Landscape: Landscape Renovation Success Due To Customer Relationship

This landscape renovation project continued growing and into a maintenance contract.

Imagine being called in by a client to redesign their backyard and add entertainment space — and then doing such a good job the work is extended to redoing the rest of the landscape, with a maintenance contract besides.

That’s the situation designer Elena Andrews and the crew at Hilliard, Ohio-based Hidden Creek Landscaping, Inc., found themselves in with the job that won the firm a 2016 award for projects of more than $150,000 from the Ohio Landscape Association.

The secret to so much success: great communication between Hidden Creek and the clients. 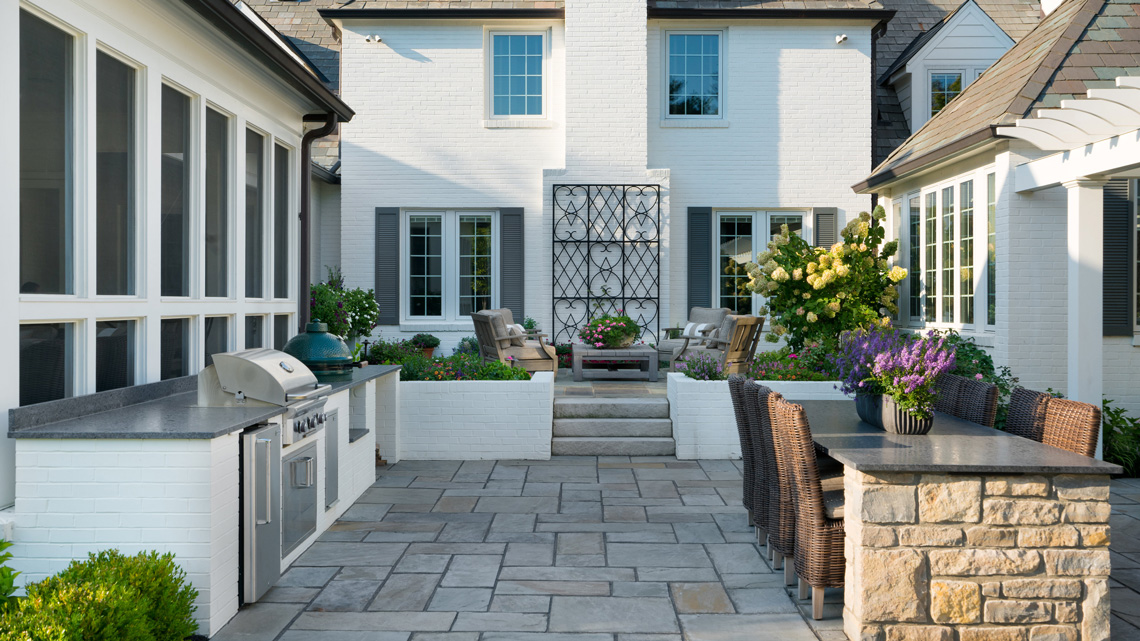 Andrews, who explains the job was a referral from another client who had also been referred to Hidden Creek, says the clients had two major desires with their project. They were looking for more entertainment space in the backyard, while simplifying the overgrown landscape, which was important to the owners.

“She’s an avid gardener, but because of back problems she couldn’t keep up with the daily maintenance,” says Andrews. “At the same time, there were a number of pieces that were sentimental to her. And, she also wanted to maintain an English garden feel to it. It had to have some formality but playfulness, too. She’s a complete plant lover.”

The couple’s desires for their entertainment area were equally exacting. 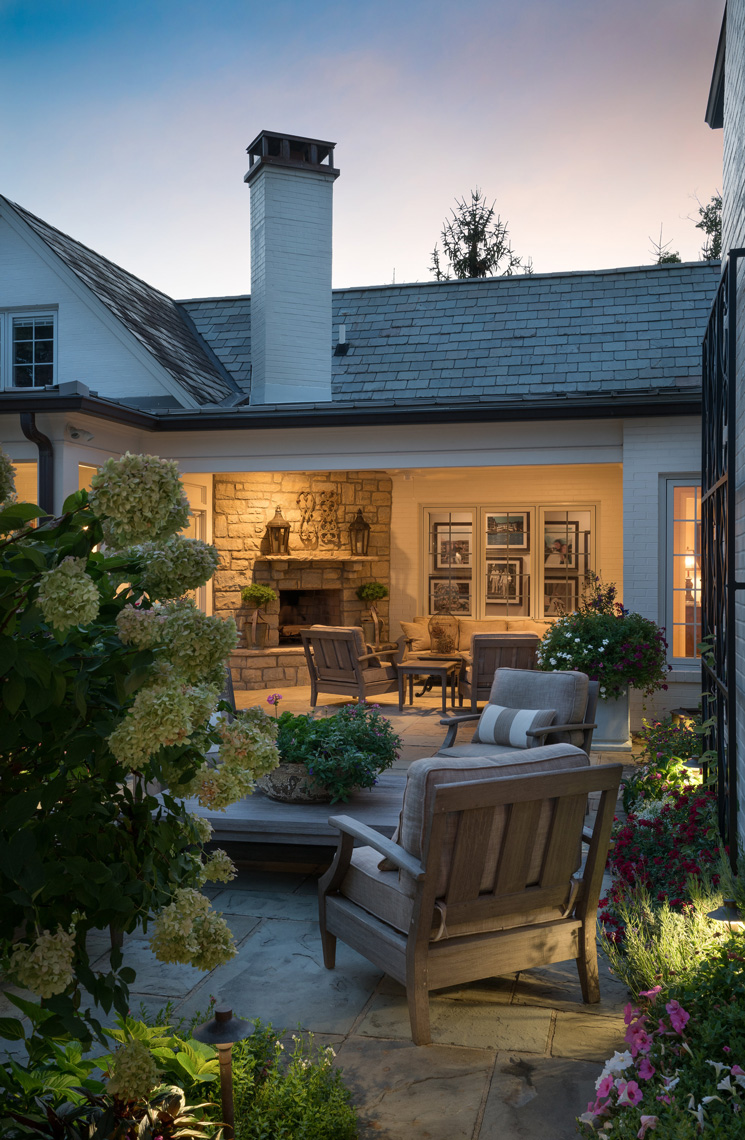 “They wanted to make it look like it was part of the original design of the home,” she explains. “They had made a very sympathetic architectural addition to the house about 15 years earlier, and they wanted to make sure that what we did looked like it had happened at the same time and so it clearly wasn’t an add-on.”

Beyond removing the planting beds and the lower bluestone patio, Andrews says her first goal was to come up with a design for the new entertainment area that allowed it to flow together with the upper patio. 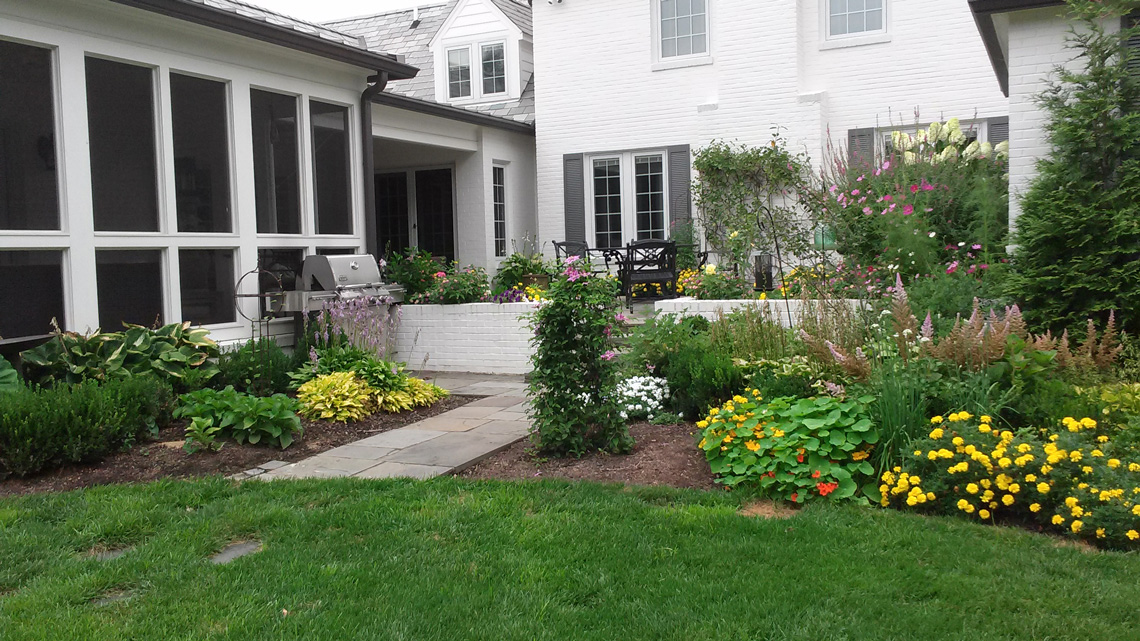 While the use of more bluestone was the obvious answer, Andrews opted to have the stone do double duty by helping to divide the outdoor kitchen area from the dining area and pergola/spa.

“As you come down the steps from the upper area, the bluestone is done in a French pattern,” she says. “Once you hit the line where the outdoor dining table is, the bluestone switches to a horizontal running bond, so there’s a subtle change to identify that this is another outdoor room.”

Placing the outdoor kitchen proved to be a bit of a challenge. Eventually, Andrews located it up against the screened-in porch.

“There was an existing gas line in the area for the grill, and we knew we wanted to have the spa a little further from the main line of traffic,” Andrews says. “Because the outdoor kitchen was going to be touching the house, it was built out of brick so it would fit a little better. There’s a small gap behind it with enough room to sweep up debris.” 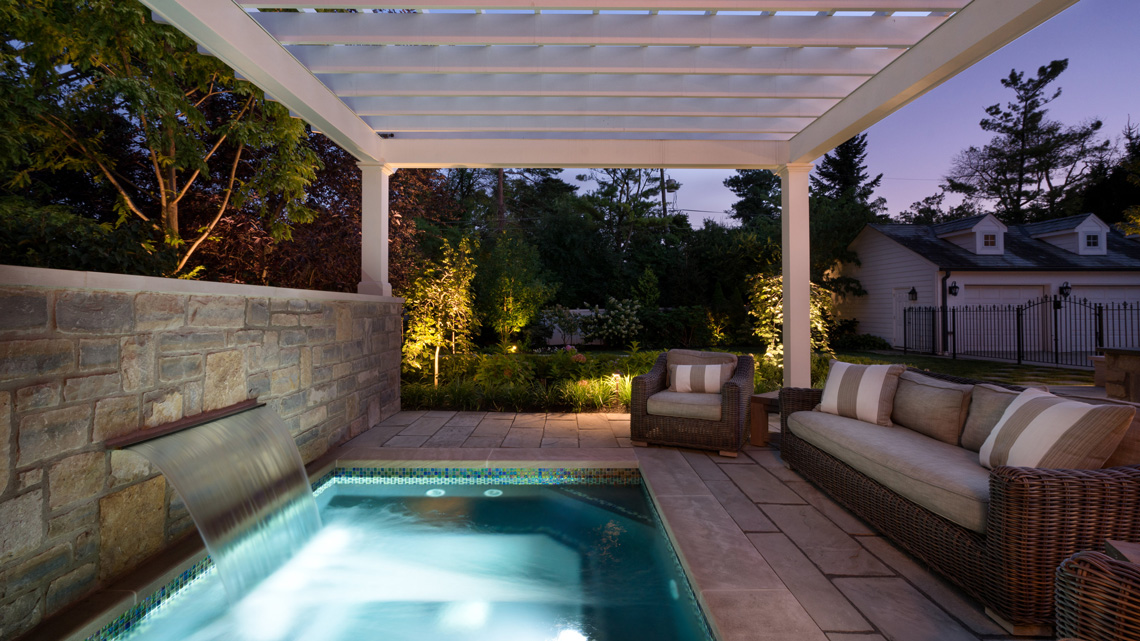 Before going ahead with that part of the design, Andrews carefully studied how the kitchen — which includes a grill, Green Egg smoker, refrigerator and trash can, as well as storage for wood for the fireplace — would look from different spots inside the house.

For a dining area on the new patio, Andrews proposed and had built a 10-foot table with a stone base and honed granite top. She says it, along with the change in bluestone patterns, helps define the two main areas of the outdoor space.

The sunken saltwater spa, which is covered by a pergola, doubles as a water feature, with a waterfall cascading from the stone wall behind it. The clients had requested a spa, but Andrews felt that by treating it as a water element makes a more attractive seating area when the spa isn’t in use. 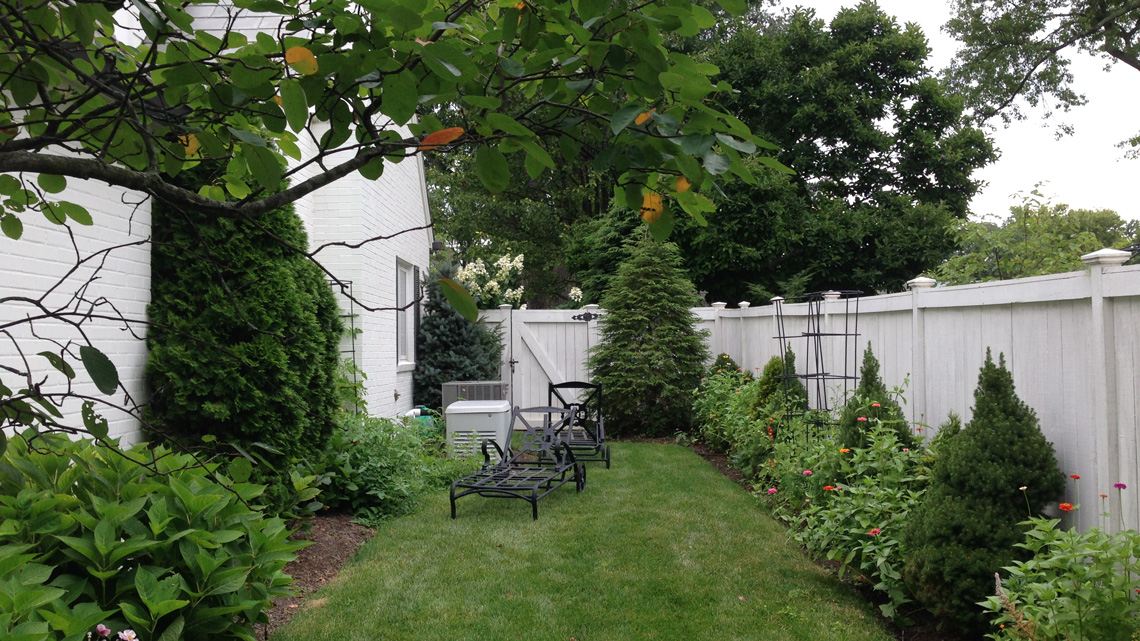 “Since it’s a sunken spa, we had to treat it like it was a pool,” she says. “In working with the city, we had to add a black wrought iron gate along the driveway for safety.”

She adds that the clients were so impressed with the black wrought iron that they ended up requesting the design of new trellises for the rear area that mimicked the railings on the front of the house.

The pergola, too, came in for city review. Andrews explains Upper Arlington has a limit of 200 square feet for any freestanding roof structure or pergola. However, in doing research, she says she found if it is attached to the house it didn’t fall under those same guidelines because it would be considered a home addition. 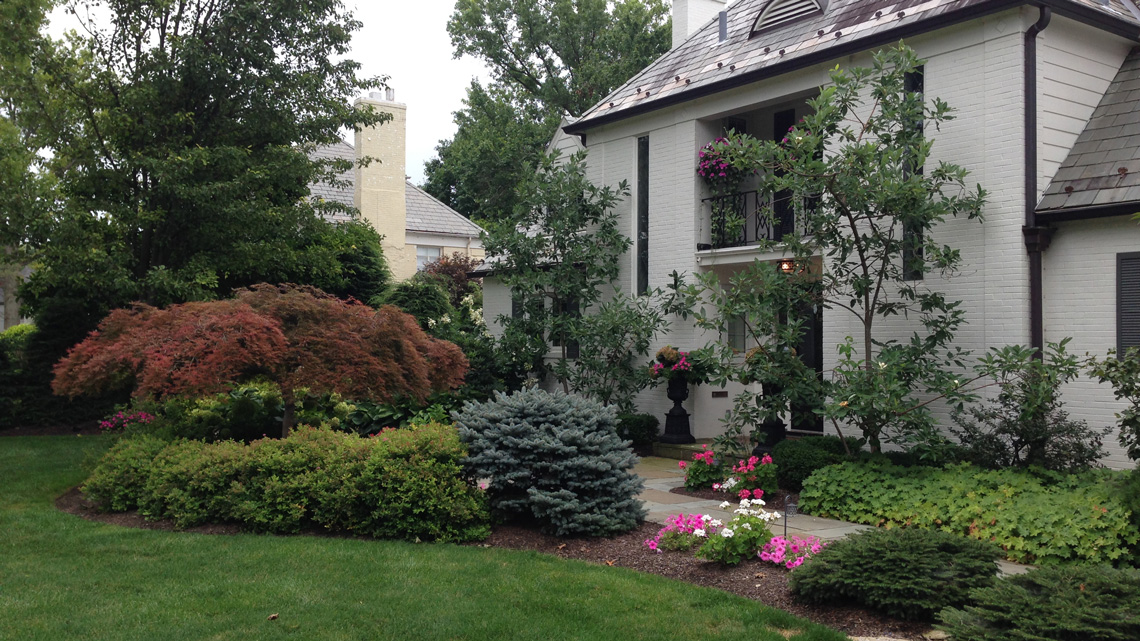 “The 200 square feet would not have covered the area I wanted for the spa and seating area around it,” Andrews says. “It would also have been out of scale for the house. The pergola was designed to be a standalone structure, but some of the horizontal supports touch the house, so it’s considered an addition.”

Lighting for the project includes lights on the hardscape as well as throughout the front and back landscapes.

“With the lighting, they wanted to make sure that the evenings felt inviting but not glaring,” says Andrews. “The spa has lighting and a sound system that’s controlled by their phones. Various trees in the backyard are up-lit so you have a sense of depth of the yard in the evening.”

As with the backyard, when the couple put the rest of the property’s landscape in Hidden Creek’s hands, Andrews says the main goal was to simplify and organize what was there. While some of the trees in the front were moved to the rear of the property, several others, including a Japanese maple and magnolias that flank the front door were left.

The front landscape was enhanced with new additions include boxwood hedges, some deciduous shrubs and what she calls “a ton of different perennials.” 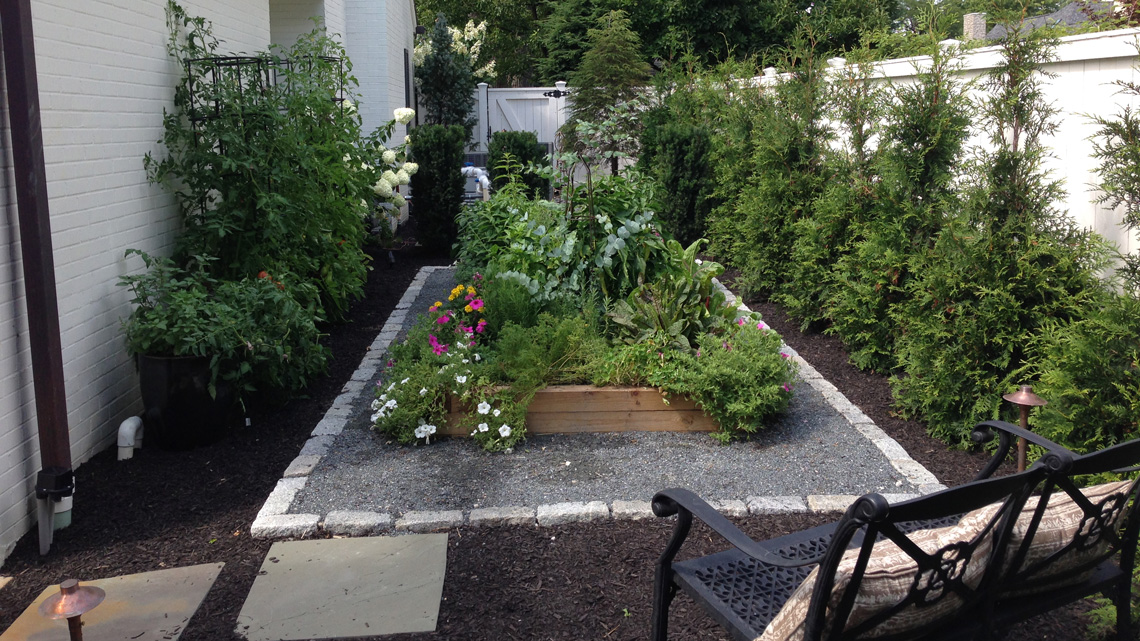 “Again, it was done is such a way that it looked like it had been there forever,” she says. “We were lucky with some of the sizes of the shrubs we were able to get; they were amazingly mature, and the clients were very happy with it.”

However, the feature that makes Andrews smile is what she and her crew accomplished in the clients’ side yard. What had been a spot for the air-conditioner units and a few pieces of outdoor furniture became a vegetable garden for the owners.

“That’s where the spa equipment had to go,” Andrews explains. “I wanted to screen it, but I also wanted to take advantage of the space, so I created two raised beds for the owner, which are a little easier for her to manage with her back. It’s not something you can see from the street or from the backyard, and it could have just been a throw-away area, but now she has space for her garden.”

Certainly, that concern for the clients and the good communication it generated is one of the things Andrews is most proud of with this project. While she’s confident the overall design really looks like it was part of the original house, it wouldn’t have happened without good communication and a lot of trust among all those involved.

“We had about eight different subs involved in the work and we’re all proud of how successfully that worked,” she says. “We have good procedures in-house, but our lines of communication were great through the entire process. If there was a hiccup, we were all able to come together and solve it. But, the clients really trusted us, our process and our design intent. We really developed a fantastic relationship with the clients.” 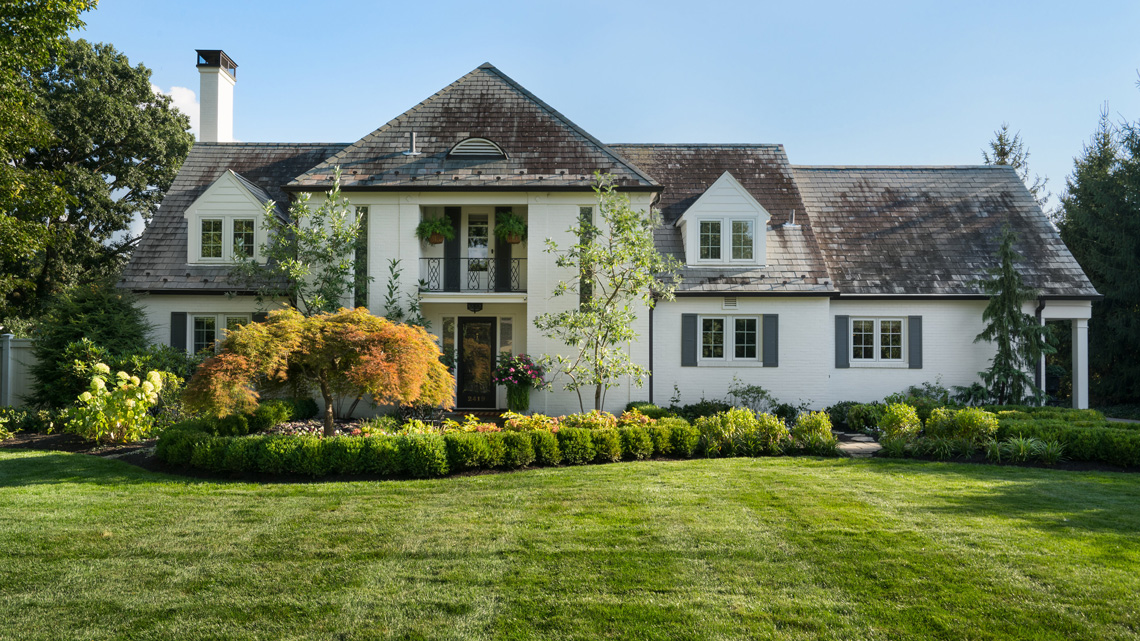 And, Andrews admits that having so many subs involved — from gas and lighting to the pool and fencing — was probably the job’s biggest challenge.

“When we go into a project, often it’s just our crew on the site,” she says. “To have so many people on site, with us kind of acting as the general contractor — even though some of the people were working directly for the clients — we wanted to make sure everything was running smoothly.”

They, along with what was typically a three-man crew from Hidden Creek, took five months to complete the job, with demolition and hardscape work beginning in December and the project wrapping up in May.

“We ended up with a very collaborative process,” she concludes. “It’s something I’m trying to emulate with all my clients now in terms of sharing information through the entire process.” 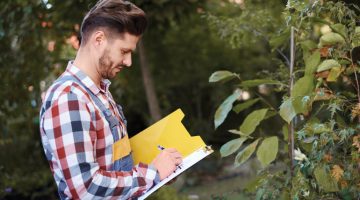