In Pennsylvania’s Brandywine Valley, Longwood Gardens has unveiled plans for a sweeping transformation of its core area of conservatory gardens. The $250 million project is the most ambitious revitalization in a century of one of America’s greatest centers for horticultural display. Adding new plantings and buildings across 17 acres, Longwood Reimagined: A New Garden Experience will expand the public spaces of the renowned central grounds and connect them from east to west, offering a newly unified but continually varied journey from lush formal gardens to views over open meadows.

The project originates from a master plan developed in 2010 by West 8 Urban Design & Landscape Architecture with WEISS/MANFREDI Architecture/Landscape/Urbanism. Longwood has continued working with WEISS/MANFREDI as lead designer, in collaboration with Reed Hilderbrand, on Longwood Reimagined, which continues the institution’s history of commissioning and collecting outstanding garden designs and glasshouses. The project will be managed by Bancroft Construction Company, based in Wilmington, DE. 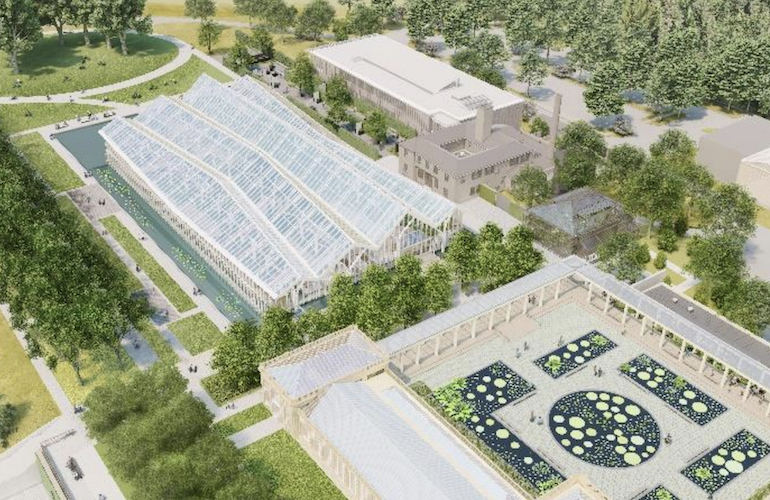 In keeping with Longwood’s tradition of blending fountain gardens and horticultural display, the centerpiece and largest single element of Longwood Reimagined is the creation of a new 32,000-square-foot glasshouse, designed by WEISS/MANFREDI, with gardens and pools designed by Reed Hilderbrand. This new West Conservatory with its asymmetrical, crystalline peaks seems to float on a pool of water, while the garden inside, inspired by the wild and cultivated landscapes of the Mediterranean, is conceived as seasonally changing islands set amid pools, canals, and low fountains. In the tapestry-like garden design, iconic plants of this ecology such as aloes, laurels, blueblossom, and Greek horehound hug the ground, with higher plants such as cypress and 100-year-old olive trees rising up into the soaring space while other plantings are suspended from above. Building on the great 19th-century tradition of glasshouses through new sustainable technologies, the West Conservatory is a living, breathing building, with earth tubes and operable glass walls and roof that allow the interior garden to thrive.

Longwood’s Cascade Garden, the only design in North America by the great Brazilian landscape architect Roberto Burle Marx, is being relocated in its totality to an all-new, 3,800-square-foot glasshouse of its own, a jewel box where the tropical plantings will be preserved and can thrive at the heart of the conservatory ensemble. A new outdoor Bonsai Courtyard, built alongside the West Conservatory, will exhibit one of the most outstanding collections of bonsai in the country. Wood walls and hedges will create an intimate, gallery-like space with bonsai displayed on free-standing pedestals and on ledges mounted to walls. Carved into the topography that faces the Main Fountain Garden, a new public restaurant and private event space with a series of vaults reveals the spectacular fountain displays. Above the restaurant and event space, the landscaping of a new South Terrace and South Walk provides a shady promenade extending along the existing and new conservatories to a new West Terrace, where the landform echoes the arc of a stand of hundred-year-old plane trees and frames views out toward the Brandywine’s meadows.

Other elements of the project include construction of a new education and administration building with a state-of-the-art library and classrooms; renewal of the Waterlily Court designed by Sir Peter Shepheard (1913-2002); and preservation of six historic Lord & Burnham glasshouses from the early 20th century, to be relocated at a later date and used for year-round garden displays. As part of the initial phase of transforming the area, Longwood’s century-old Orchid and Banana Houses will close on March 1 for preservation and will re-open in time for Longwood’s 2021 year-end holiday display.

“In the tradition of our founder Pierre S. du Pont, who transformed a rural arboretum into one of the world’s most beautiful places for horticultural display, Longwood Gardens has been growing and evolving for more than half a century from a private estate into an inviting center for public enjoyment,” said Paul B. Redman, President and CEO of Longwood Gardens. “Each generation of Longwood’s stewards has both preserved and renewed the Gardens, commissioning the era’s leading landscape designers and architects to add to the grounds. Over time, Longwood has assembled one of the world’s most important collections of garden designs and glasshouses. With the assistance of the brilliant team of WEISS/MANFREDI and Reed Hilderbrand, Longwood Reimagined will be the largest undertaking in our history, enhancing the dazzling and deeply satisfying Longwood Gardens that will continue to enthrall our public for decades to come.” 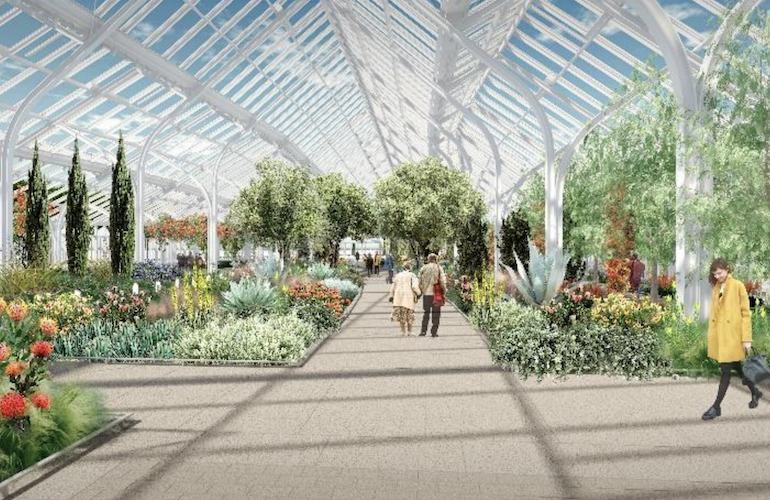 “We’re inspired by the sense of discovery and invention that are signatures of Longwood Gardens,” commented Marion Weiss and Michael Manfredi, founders and principals of WEISS/MANFREDI. “We conceived of the design as a cinematic journey, a sequence of experiences that range from intimate to grand. The West Conservatory, with its pleated crystalline ridge, appears to float on water and is magically reflected by day and night. The vaults of the new restaurant and event space are carved into the hillside to reveal views of the Main Fountain Garden. A new arcade frames the historic Waterlily Court, and the great Cascade Garden is sheltered in a custom-designed glasshouse. These transformations extend the DNA of Longwood Gardens through the creation of new settings for public enjoyment and delight.”

“We felt our first responsibility in reimagining this expansive area of the grounds was to give expression and identity to the idea in the master plan to extend the conservatory complex along the high ridge,” said Douglas Reed, partner and principal of Reed Hilderbrand. “We drew inspiration from existing features of Longwood’s landscape, among them tree-lined walks. The expansion scheme structures trees to define space and direct movement, recognizing Longwood’s origins as an arboretum. Above all, we felt this ambitious project must retain the character and warmth associated with Longwood’s origin as an arboretum and country estate.”

Reed Hilderbrand’s design for the expanded landscape offers visitors an itinerary of grand walks and new and restored gardens, with places for gathering and pause provided throughout the intensive experience. Each garden reflects its identity and purpose: a West Walk that serves for strolling and orientation, a Central Grove along the Waterlily Court that serves as an entry to the new West Conservatory and relocated Cascade Garden, a walled Bonsai Courtyard that provides space for the exhibition of rare bonsai, and the expanded green of the West Terrace celebrating the grove of 100-year-old plane trees.

A key element of Longwood Reimagined is the relocation and reconstruction of the Cascade Garden. Planned in consultation with WEISS/MANFREDI, Reed Hilderbrand, Burle Marx Landscape Design Studio, and a panel of preservation experts convened by Longwood, this is the first time that a historic garden has been relocated as a whole. Burle Marx designed the Cascade Garden in 1992 within an existing structure, which was retrofitted to accommodate hundreds of tropical plants, 35 tons of rock, and 3,000 feet of heating cable. Now this ensemble of richly textured plants that evokes elements of the rainforest—palms, bromeliads, philodendrons, and more—set amid vertical rock walls, cascading water, and clear pools will be moved into a new, custom-designed glasshouse.

“The Cascade Garden gathers in a condensed space all the recognizable elements of the work of Robert Burle Marx, one of the 20th century’s most influential landscape architects,” said Anita Berrizbeitia, Professor of Landscape Architecture and Chair of the Department of Landscape Architecture at the Harvard Graduate School of Design. “Its unique esthetic vision was delicately realized and is exceptionally well preserved. The new space, custom-designed for the Cascade Garden’s optimal health and well-being, will allow it to thrive for many decades to come.”

Longwood expects to break ground on the project in Spring 2021. The Main and East Conservatories will remain open throughout the transformation, and Longwood Gardens will continue to present an ongoing schedule of events and performances.