Story Of A Landscape: New Materials Bring A Modern Spin To Deck Project

These clients requested that Earthscape eliminate any visual barriers for the deck in their backyard.

“Sleek” isn’t a word that’s often associated with landscape projects, but in the case of a residential upgrade the Elmira, Ontario-based Earthscape did for a local homeowner that incorporates some cutting-edge materials, the same old descriptive phrases just don’t seem to fit.

Sure, the job features a timber-framed fir pergola and plenty of natural and man-made stone products, but it also utilizes clear acrylic plastic inserts to protect pergola users from the elements, glass railings, a composite deck and perhaps the most unconventional element: a polycarbonate roofing material to let plenty of sunlight in without overheating the space.

Not only did the project win recognition from the Landscape Ontario Horticultural Trades Association for a residential project from $100,000-$250,000, but it’s a marked upgrade from what the homeowners originally proposed doing.

Sam Bauman, co-owner of Earthscape and the company’s operations manager, explains the original contact with the owners came because of a project the firm was doing in the neighborhood. 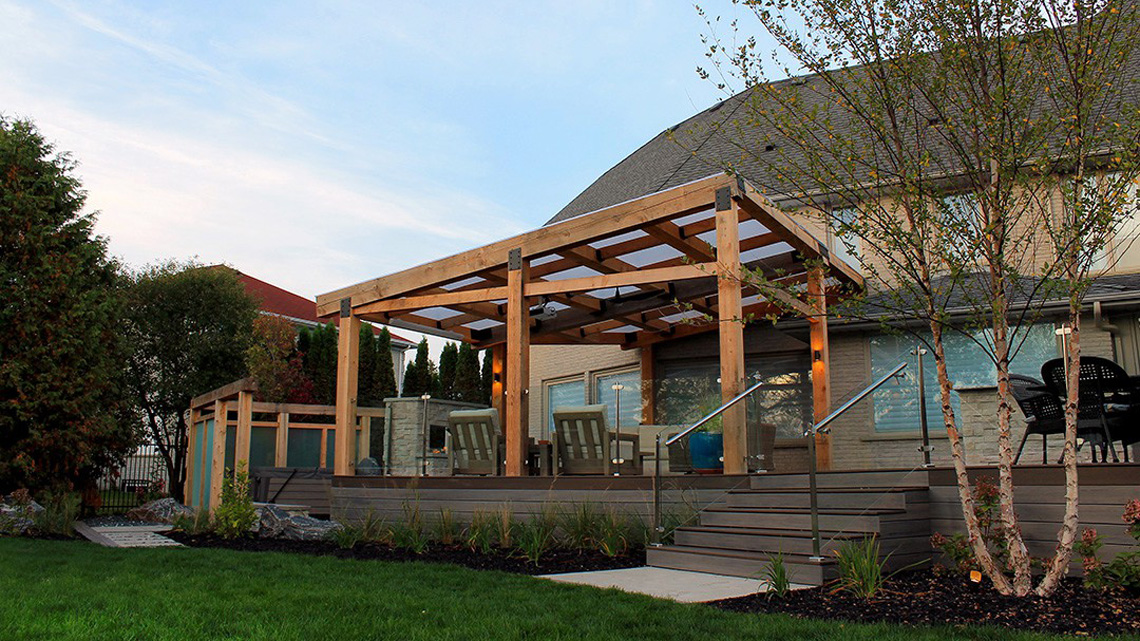 “At that point, they were interested in having us re-lay an existing interlock patio,” Bauman explains. “We had given them a quote and then never heard a response until the next season, at which point what they wanted had drastically changed.”

Zac Wolochatiuk, Earthscape’s design manager, says at that point, the company looked upon the client’s backyard as pretty much a blank slate. Although the home had an existing deck and a paver patio off to one side, the decision was made to start from scratch with its new design.

As with many clients, these homeowners had recently remodeled their interior and were looking for an outdoor upgrade that would allow them to easily entertain guests and well as provide a pleasant space for the family to relax. 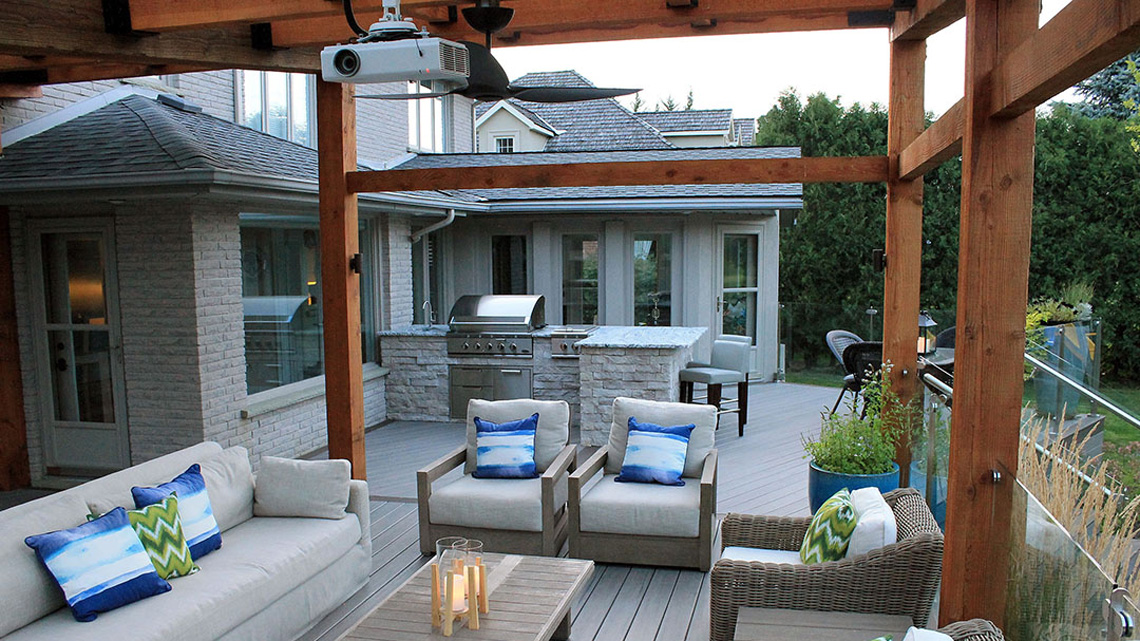 “There was some discussion early on about trying to use some of the existing framing for the deck – which was at the same elevation as the deck we built,” Wolochatiuk says. “But after trying to work with it, we realized it wasn’t built to our standard so we just demolished the entire thing.”

Perhaps the most interesting feature of the project is the deck-based pergola. Both men say in trying to meet the needs of the clients it expanded their own horizons.

Originally, Bauman says Earthscape envisioned a traditionally roofed pergola. However, because it would be against the back of the house, the homeowners were concerned they’d be losing natural light in the adjacent interior rooms. The answer arrived only after the company began digging into less-traditional alternatives.

“We found a polycarbonate roofing, which is plastic with a frosted membrane on it,” Wolochatiuk says. “It allows 90 percent of the light in, but reflects 90 percent of the UV and heat. When you’re under it, even on a hot, sunny day, the temperature feels as if you’re in the shade.

“It really gave us a modern spin on a timber-framed structure.”

As with any roof in an area prone to winter snowfalls, the design did have to be turned over to an engineer to set the final specs in terms of framing and the size and spacing of the beams, however. 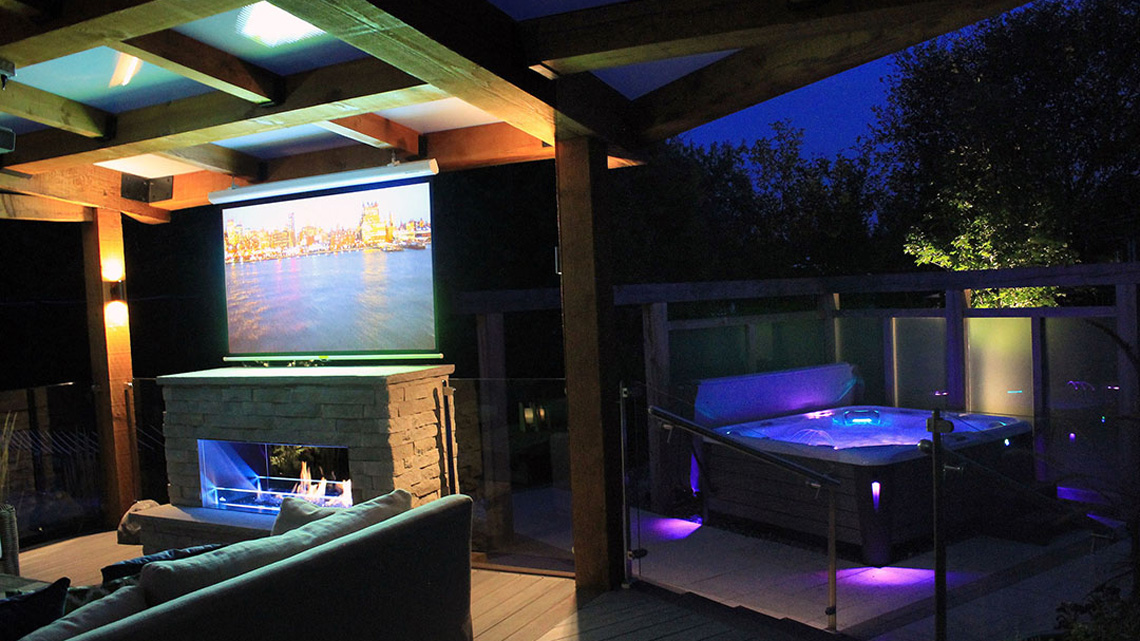 Frosted plastic inserts for the pergola’s roof and the glass deck railings not only continue with the sleek modern look of the project, but also serve the clients’ desires, Wolochatiuk says.

“They really didn’t want any visual barriers to their backyard,” he says. “The property backs up on a golf course, and it’s a really nice setting. Whether inside the house or sitting on the deck, they wanted to keep those nice views without any obstructions.”

In much the same way, the composite deck provides them with easy convenience with little maintenance, he adds. As a further modern touch, the pergola includes a drop-down projector screen. 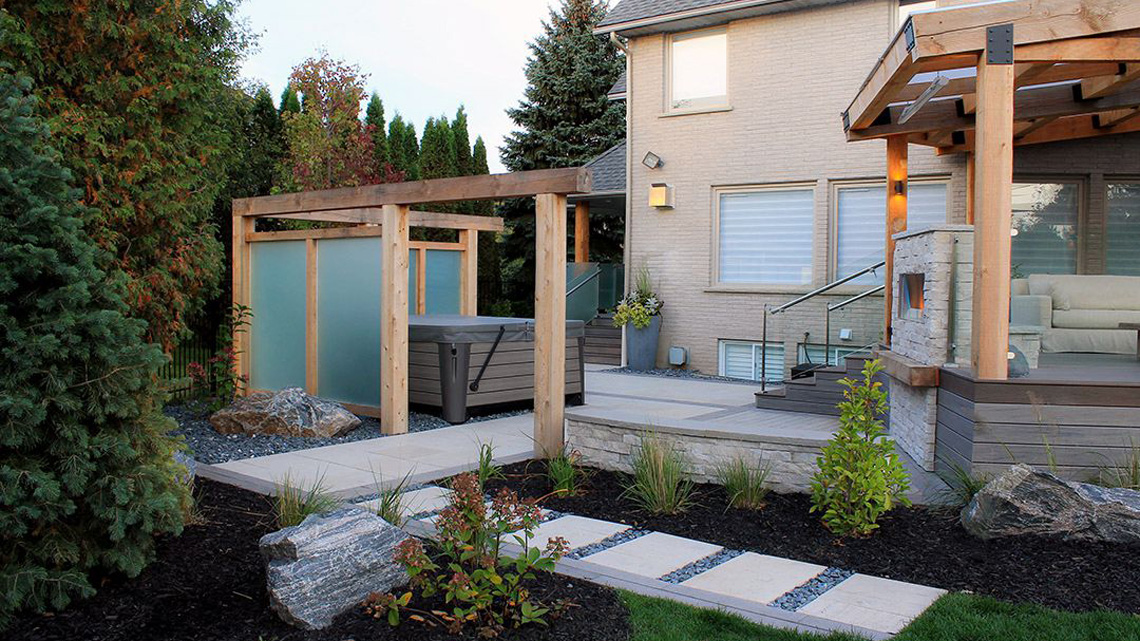 Off the deck and adjacent to the pergola is a lower gathering area. A double-sided glass fireplace from Napoleon at the pergola end of the deck divides the two spaces, but provides a focal area for both.

Not that plastic and glass are the only materials used in the project. The lower area is created with travertine slabs banded with Techo-Bloc’s Borealis wood-look product for contrast.

A curved seating wall also provides an additional space for guests to gather.

The outdoor kitchen, located on the deck but outside the pergola, includes a barbecue grill, sink and refrigerator faced with an Eldorado Stone veneer. The granite countertop for the kitchen island was sourced by the homeowners. 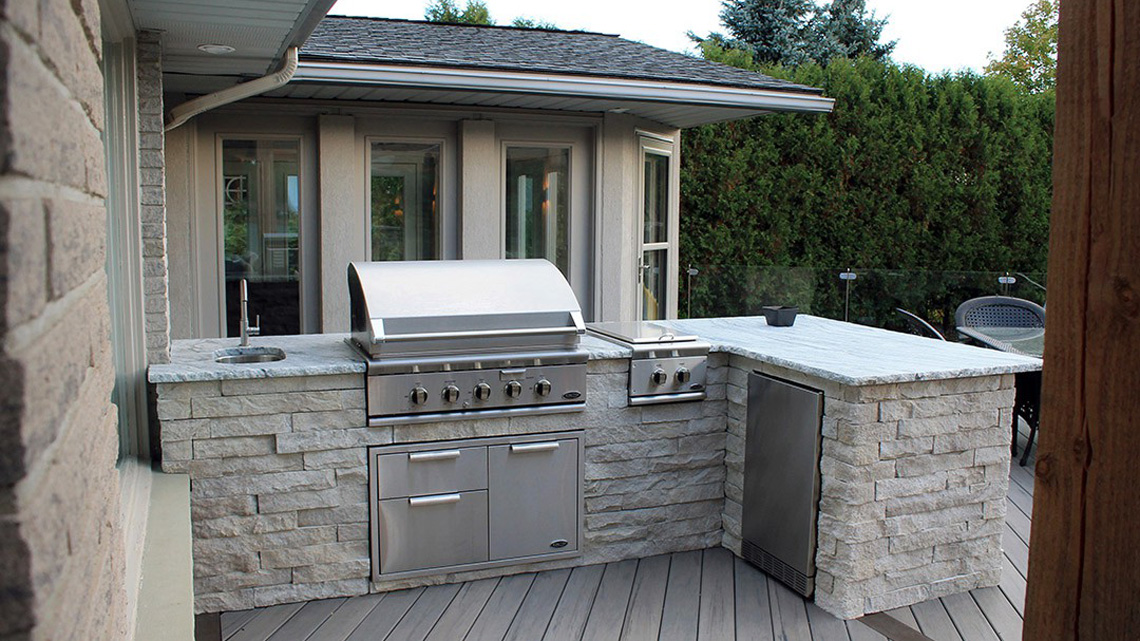 Off the lower seating area is also the clients’ hot tub, which is partially hidden by a wood and glass privacy fence. Jumbo stone steppers with granite pebbles in between them encourage access to the lower part of the lawn, which includes a basketball court.

The four-week job that involved eight company employees, plus gas, electrical and irrigation subs, was a learning experience for the Earthscape crew, Bauman says.

“Our clients and designers always push us to do things we haven’t done, which is a great thing,” he says. “The roofing material, the frosted glass panels and the topless glass railing were all components we had very little experience with at the time.” 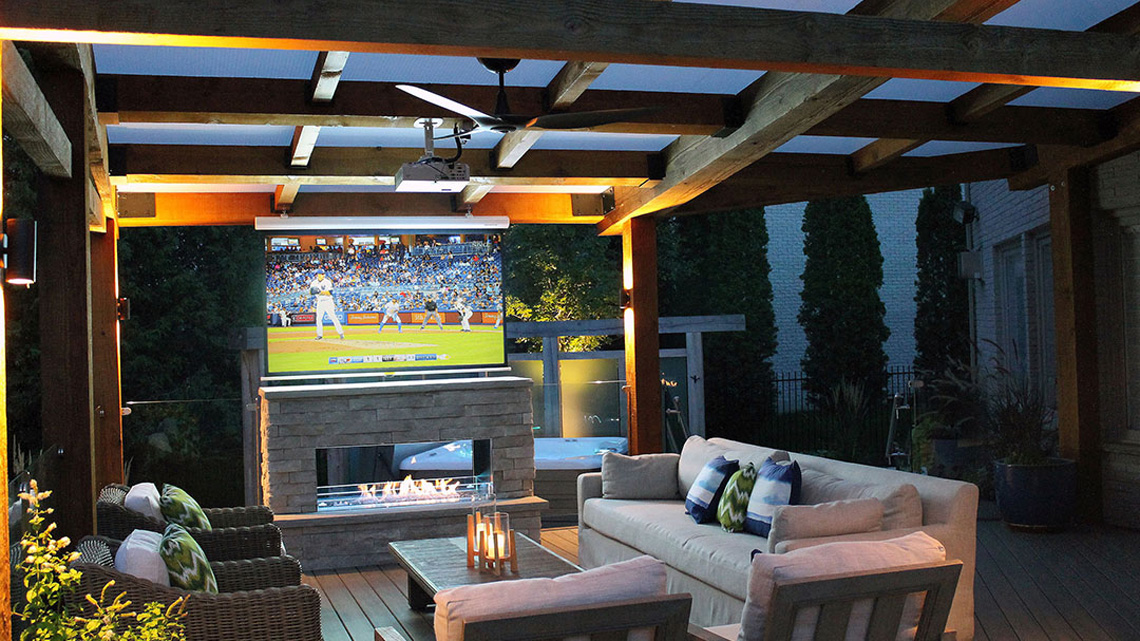 “We’re glad we went ahead with the polycarbonate material that lets the light through but blocks the UV,” he says. “We’ve been using this material quite a bit since this installation.”

He adds that he’s proud that this project has led the company into more outdoor-living-type projects where they’ve been able to use the same materials and design principals.

Still Bauman says it was tying the timber structure into the house that proved to be the job’s biggest challenge.

“Fortunately, we have great carpenters and engineers,” he says. “Overall, it went quite well.”

The clients agree. Not only are they allowing Earthscape to use the award-winning project as a reference, but there may be more in the offing.

“The family has thought about adding a pool in the back of the property,” Bauman says. “But, we won’t push that!”

Next post Industry Service A Hallmark Of This Small Ohio Firm