Darlington Designs hasn’t always constructed swimming pools. The design/build firm located in Glassboro, New Jersey, only added them to its repertoire a couple years ago, so to receive national recognition for one of its pool projects is extra special for owner/designer Simon Darlington.

Darlington, who says the pool is one of the most-challenging his company has installed to-date, describes the job for which his firm was recognized by Hardscape North America for use of a combination of hardscape products in a residential project of more than 4,000 square feet, as one of complexities.

“The more complexities in a project, the more we enjoy it,” he says.

Not that the job is done yet. The pool was the focus of the second phase of a master-planned project that also includes an outdoor kitchen, dining area and fire pit. A large octagonal cabana — which should complete the job — will likely be done this summer. 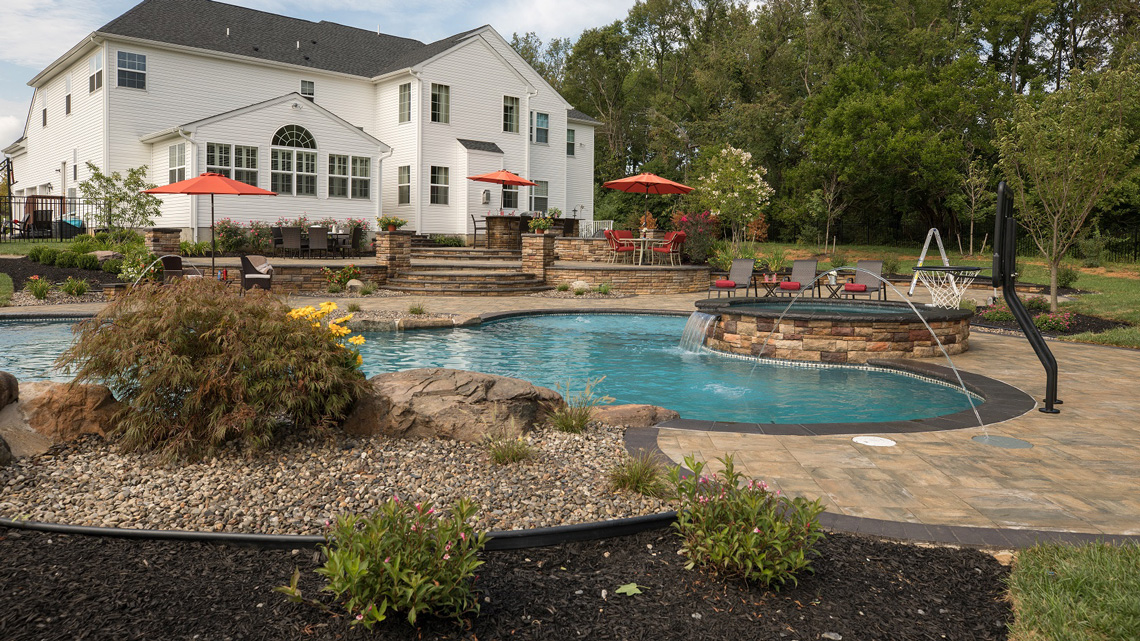 Darlington was originally referred to the clients by one of their neighbors who was familiar with the company’s work. He says after interviewing several firms, they felt his firm was a good fit.

“They were looking at a really involved project and that’s where our sweet-spot is: multi-faceted projects,” he says.

Darlington describes the jobsite as approximately two acres in a new subdivision. Although there was nothing in the backyard, it did offer about a three-foot grade change from the home to about 40 feet out.

While the pool is the centerpiece of the project, Darlington adds that the clients desired to work from the house out. That and budget dictated that the first phase involved the outdoor kitchen and other amenities. 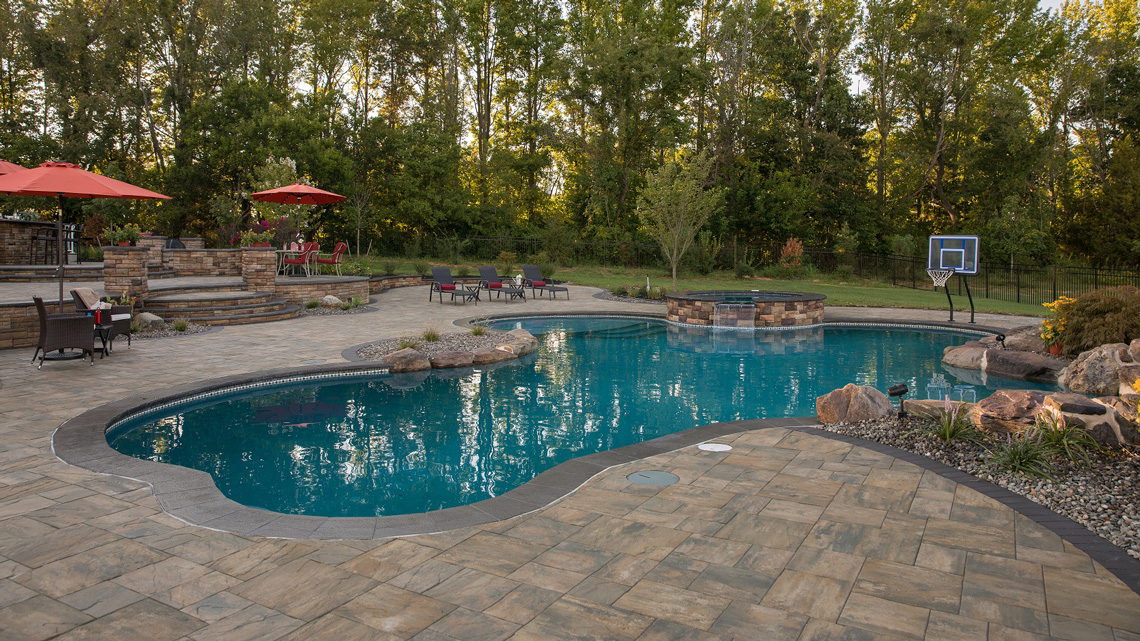 “We created different use areas that played into the grade nicely,” he says. “We created a fire pit area with seating walls. We created an outdoor kitchen area that has a raised bar and several amenities, including a grill, refrigeration, storage and a side burner. On another level we created an outdoor dining area. The first phase is probably about 1,500 square feet of patio space.”

Integral to the phasing of the project was the correct selection of hardscape products. Darlington says the clients were looking to create some color to contrast with the white exterior of the home. They ended up focusing on earth tones with some gray.

“We used a really neat product from EP Henry that allowed us to create the raised patios that fade into the grade against the house,” he says. ” It’s called EP Henry Chiseled Stone. One important piece in selecting this product was picking something they’d be able to add to the following season and not be concerned about it matching. The two phases came together seamlessly; it really looks like it was done as one phase.” 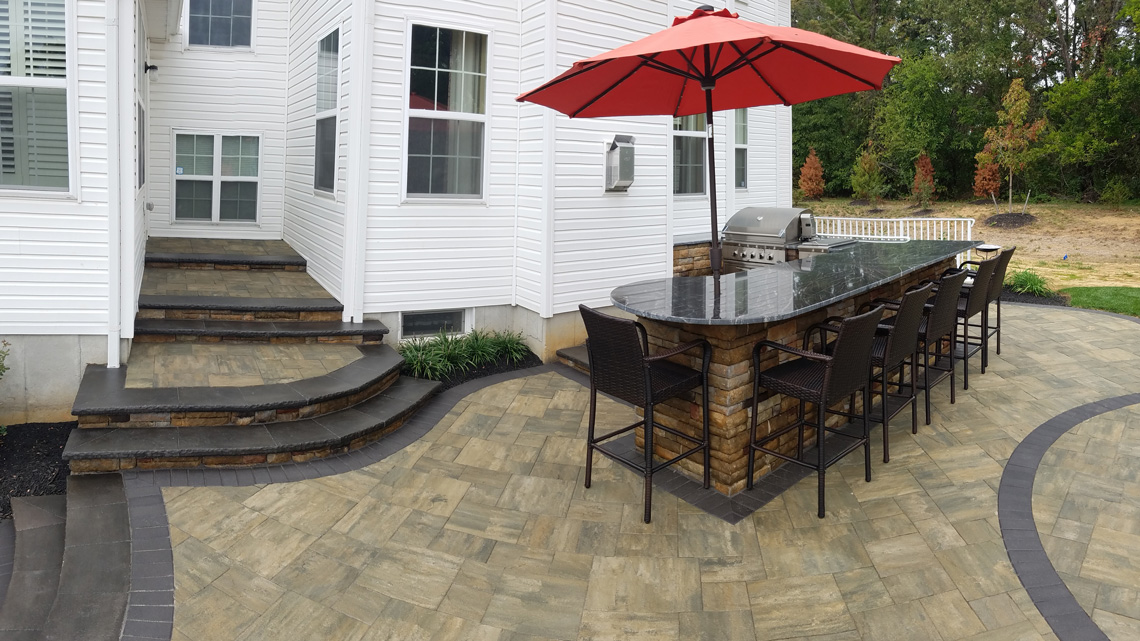 In much the same way, he says the transformer for the outdoor lighting — which was installed during the initial phase – was sized to handle subsequent phases.

Darlington describes the centerpiece of phase two as, “A really custom pool. It’s about a thousand square feet with a raised spa and a natural rock waterfall with boulders.”

Among the custom features are rock shelves, laminar jets that shoot arches of water into the pool, bubblers that shoot it onto the sun shelf, and a host of lighting to create different colors but also uniform illumination. The spa includes custom jet packs and custom-contoured benches.

On a more practical note, the pool also includes two filtration systems, four different pumps, an electric heat pump for the pool itself, and a gas heater for the spa. The pool equipment is carefully hidden.

“We used the grade to our advantage and hid it behind the water feature,” Darlington says. “The landscape was specifically chosen to conceal it all as the plantings mature. We even went the extra mile to do all the pool equipment in black, so it’s very minimal in terms of what people see.” 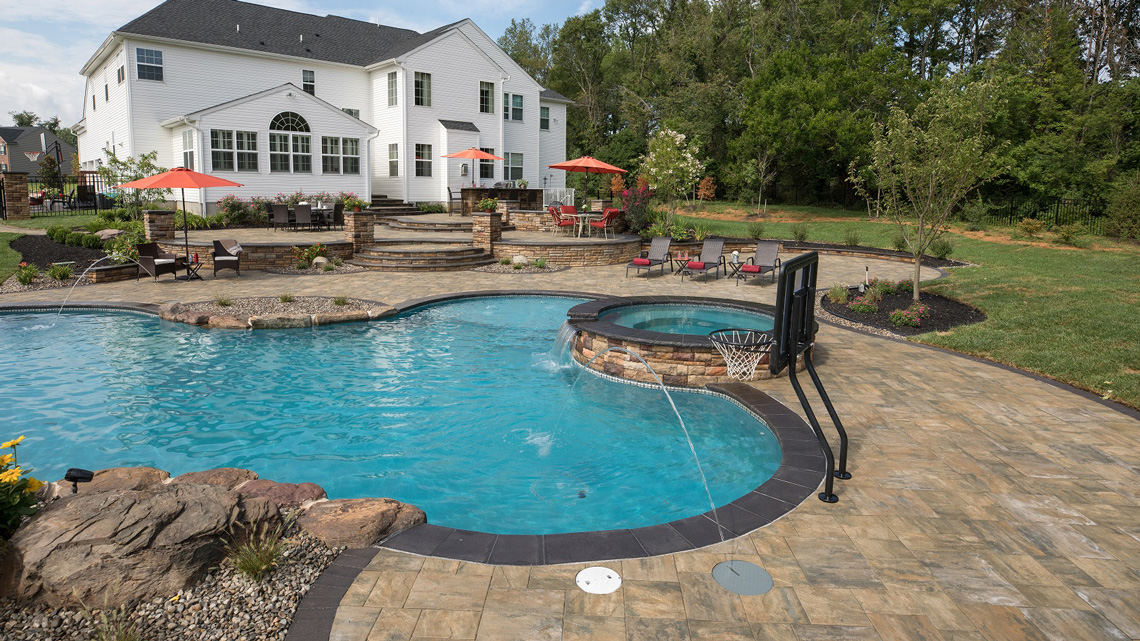 Of course, the lights, jets and heaters are all controlled via smartphone.

“It’s definitely one of the nicer ones we’ve done,” says Darlington of the pool, adding that it’s also his favorite feature on this job. “One of the reasons we’ve transitioned into doing pools is that by providing the entire pool in-house we can control the project timeline and the results.”

Although Darlington Designs did some planting in the first phase to soften the space around the patio, the second phase incorporated more softscape including both deciduous and evergreen trees, and a mix of flowering plants and annuals.

“It wasn’t just to create focal points around the pool to soften it,” Darlington says. “It also creates some buffering from the neighbors.”

While lighting for the first phase of the project was mainly incorporated hardscape lighting such as wall lights, step lights and under-counter lights, the second phase centered on the pool, along with adding more hardscape and landscape lighting.

The natural slope of the backyard might seem to make drainage an afterthought, but Darlington says it was one of the things he really focused on early in the planning process, and he feels attention to it helps differentiate his company as professionals. With more than 3,000 square feet of pavers in the pool area, he notes there was quite a bit of water to be moved.

“This project needed an extensive amount of drainage from pool deck surface drains to graded swales around structures,” he says. “The downspouts on the home were put underground and diverted to lower elevations. With a footprint of this size, we have to do a lot of surface drains and channel drains.”

Ultimately, he says the first phase of the job took six-to-eight weeks, while the second phase ran eight-to-ten weeks, with anywhere from three to six crew members onsite at any given time.

Asked what he’s most proud of with this project, Darlington cites both the swimming pool component and the complexities the job offered.

“We like being able to provide solutions in the real world that will — in the long-term — make this project a success,” he says.

Not that it was always easy. Because the pool was so custom, Darlington says his biggest challenge was simply dealing with township building officials who weren’t necessarily up-to-date on what he wanted to do.

“The drains we used, and some of the other details created a challenging getting the township to accept those,” he says. “They wanted additional engineering specification. When we did something they weren’t accustomed to seeing every day, it created more questions and dialogue and took more time.” 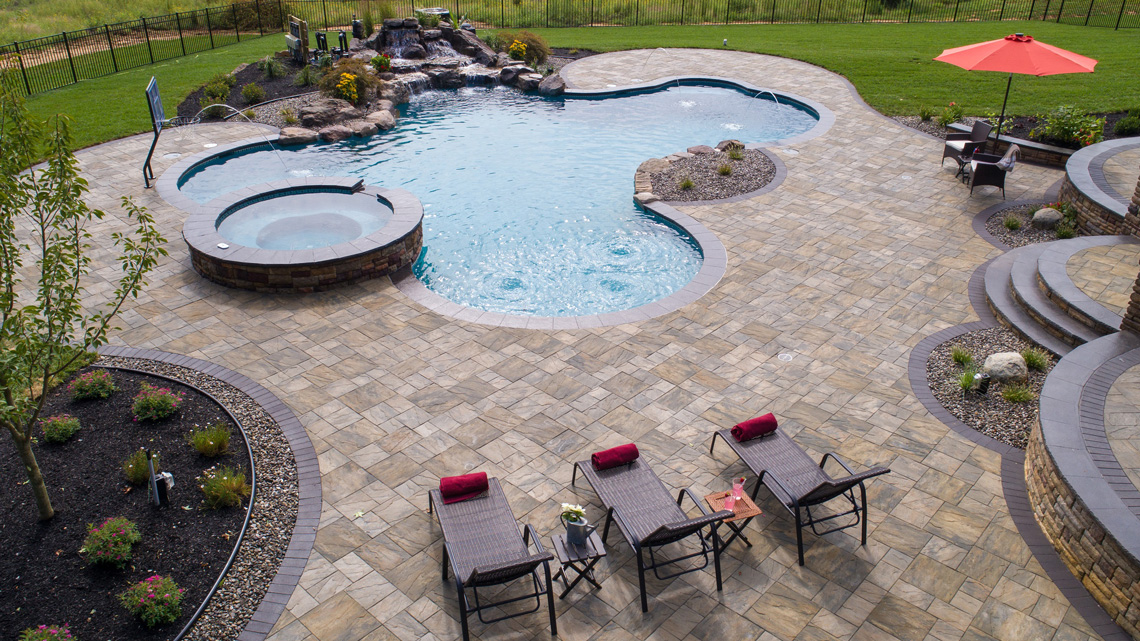 That, in turn, taught him he needs to be prepared to do more education of officials when those scenarios arise.

“We really needed to anticipate the questions and work them through what we were trying to do,” Darlington says. “For instance, we had to explain custom drains and how they meet code. It was a process of educating township officials. We needed to be proactive so as not to hinder the permitting process.”

To date, Darlington estimates the clients have spent between $350,000 and $400,000 on the site so far, and he says, “we’re optimistic” the cabana will be this summer’s project.

“This was a fun project, and we were certainly excited and honored to get an award for it,” Darlington concludes. “It was a cool opportunity and it reaffirms that we’re doing something good here.”