The project bid wasn’t necessarily the lowest, but it was the most-detailed.

What makes a landscape a prize-winner? For Rodney Rose, owner of California-based Autumn Skies Landscapes, it’s nothing less than perfection itself.

Rose, whose company installed the landscape for the Vine Cliff Winery Tasting Room in St. Helena, California, says on the surface what he calls the post-stamp-sized project that won first place recognition as Small Commercial Installation from the North Coast chapter of the California Landscape Contractors Association was “nothing special.”

“But, if you were to look at the infrastructure and see everything that it took to make it work, it’s an entirely different story,” Rose says. “It’s a very small space, and everything had to be just so.” 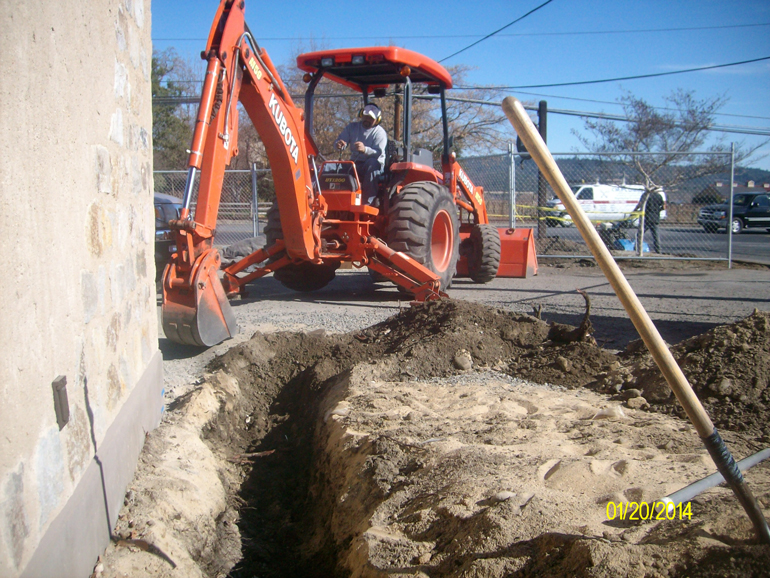 That emphasis on perfection, he believes, got him the job, designed by Steve Arns, ASA. Roses says he was told by Rob Sweeney, the owner of the tasting room project, that his bid wasn’t necessarily the lowest, but it was the most-detailed.

When he talks about being a small space, Rose isn’t kidding. The areas to be landscaped measured approximately 30-foot by 100-foot. Further complicating construction — and what he says offered by far the biggest challenge to the job — was that rather than being one of the last contractors on the site, the landscape work was being done as the building itself was being built.

“Work space was at a premium,” he says. “All we had was a very small parking lot with which to stage all our materials and supplies. There was room for four trucks, and the minute I’d have to leave to get say a load of soil, someone else would pull right in. All the materials had to be brought in in small loads.”

Additionally, the project’s location, next to busy state Route 29, offered little in the way of street parking, and a project to bury power lines along the right-of-way was going on at the same time. 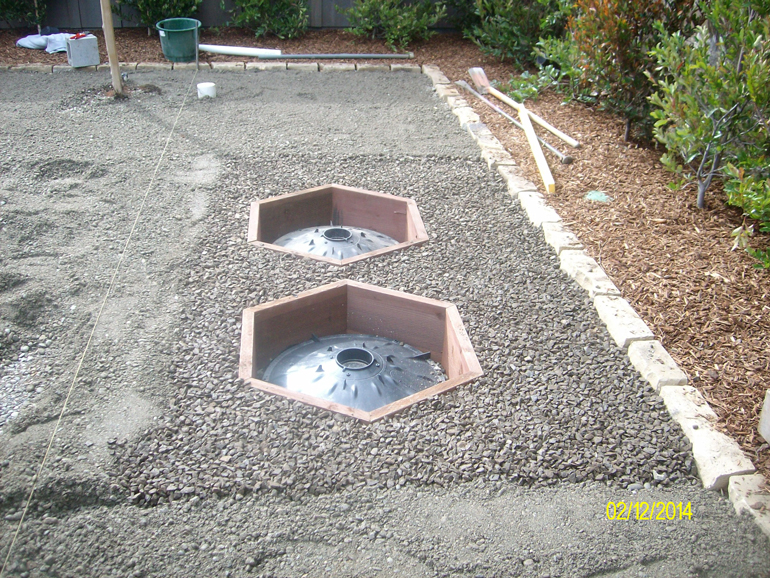 Fortunately, Rose says Autumn Skies has a reputation for working well with other contractors, although that was put to the test as the small job site required everything to go in common trenches.

“Let’s say we planned to work in a certain area installing our conduit,” he says. “Then, the electrician says, ‘I really have to get in there for the next three hours to set up a subpanel.’ We’d shift to the other side of the property, but it was quite a dance.”

It’s also true that much of what Autumn Skies installed during the approximately seven months its two-man crew plus Rose were onsite is underground. Leading the way, a drainage system made up of flow wells that are located under the two outdoor patios. 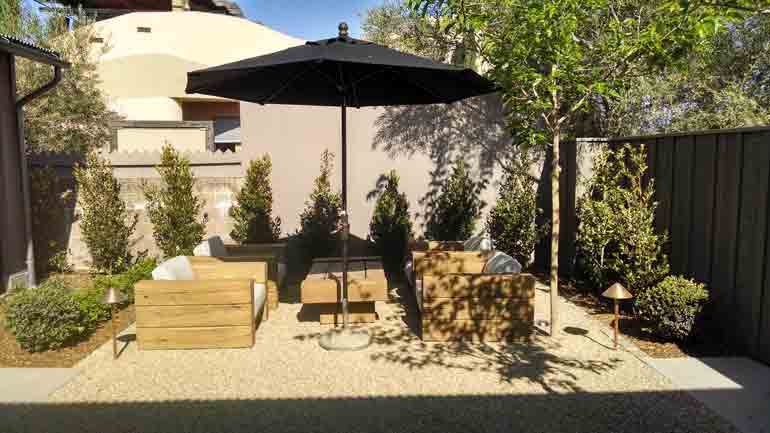 Perhaps surprisingly, the patios themselves — on separate sides of the building — are done in gravel that’s Americans with Disabilities Act-compliant. That first required the company to grade the slopes to a 1.5 percent grade.

“Then we put in a gravel pave geogrid system with a weed barrier laminate under it,” Rose says. “It’s a honeycombed grid filled with gravel and you can drive on it. The gravel is three-eighths-inch.” 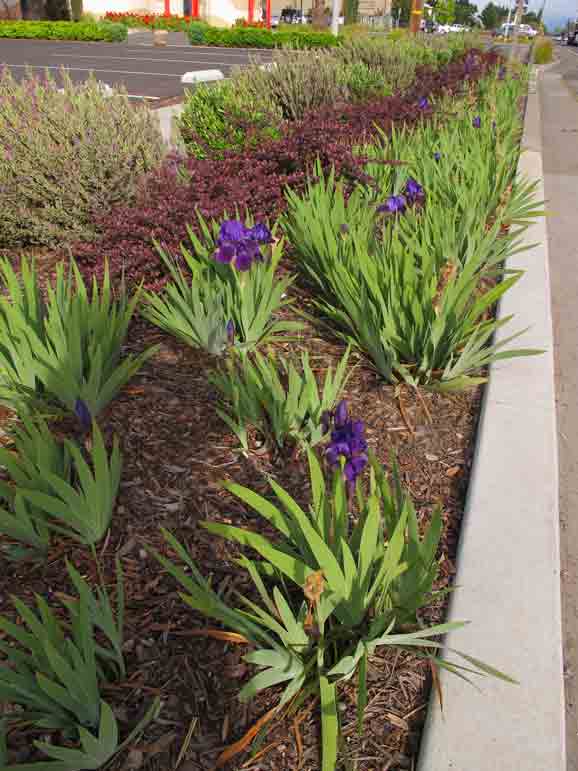 Learning about the gravel pave geogrid was a real positive of the project, Rose says, and has given him another possible element to include when he’s designing projects himself.

“It was an unusual feature of the job that I’d never used before,” he says. “Since then, I’ve called it out on designs for commercial clients and for ADA-compliance. It was an interesting aspect to the job.”

The outdoor patios each measure approximately 20-foot by 20-foot, and are bordered by what he refers to as small oak ledgestone to delineate the area between the patio and the plantings.

“The landscape is really in three sections,” he says. “There’s a middle section that’s a large enclosed porch that was not done by us. The areas we did are enclosed behind a fence and they’re really rustic seating areas with big, blocky chairs and tables.” 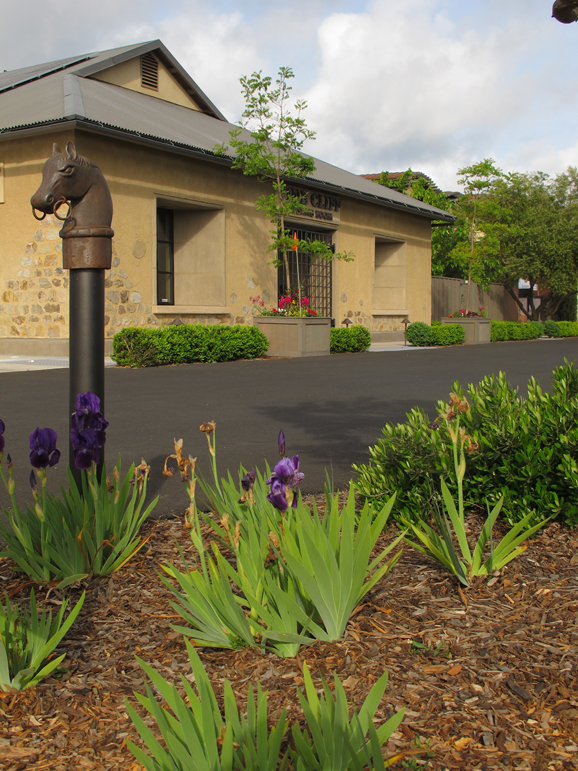 Plantings are critical to the look of the property, although they serve many purposes. For instance, the building’s sceptic field is screened with English laurel and Parthenosisus. The front median is done in Grandma’s purple flag iris, Little Ollie dwarf olives, Crimson pigmy barberry and Spanish lavender.

“In some respects, the landscape is very average,” he reiterates. “But, Steve did a great job of laying out the plants so it’s very pretty. You’ve got the gray of the olives, and the lavender with the purple flowers, the red of the barberry and the deep purple of the iris, so it’s real pleasant to look at here in the spring.” 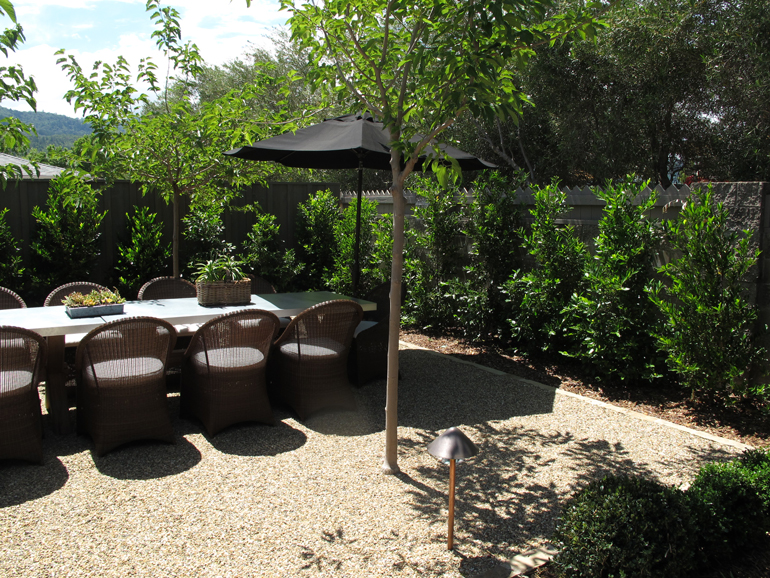 Irrigation at the site is all drip, with Netafim emitters that are pressure-compensating and sized on a per-plant spec. The landscape lighting, which Autumn Skies also installed, is a custom design from SPJ Lighting and it all low-voltage LED.

Despite all the headaches of working on the crowded site and other inconveniences — such as having to walk the trees through the partially finished building — Rose is justifiably proud of the approximately $100,000 project.

“I’m most proud of the accolades it’s gotten,” he says. “We were able to make both the architect’s and the client’s vision come off without a hitch. After Steve’s walk-through, he couldn’t believe how dead-on it all was, just as he envisioned it. He said, ‘Of all the contractors I work with, Rodney, I don’t think there’s another company who could have pulled this off the way you did.’”