Story of a Landscape: Designing a Client’s Dream Backyard

The contractor from Appalachian Naturescapes trusted his own creative process for designing this North Carolina paver patio project.

It’s easy to sometimes become impatient when a design doesn’t immediately come together for a client. That is unless you’re Carl Meyers, co-owner of Appalachian Naturescapes of Morganton, North Carolina.

Meyers says he decided to trust the process he’s always used when designing projects. And, yes, it did take a little longer, but the results are a backyard fit for an avid gardener, and winner of the North Carolina Nursery & Landscape Association 2015 Award of Distinction for Residential Landscape Installation.

It’s probably little wonder that the clients chose Meyers when they decided to upgrade from a small concrete slab patio. Not only do they have mutual friends, but Meyers also has spoken to some of the garden clubs of which the client is a member. 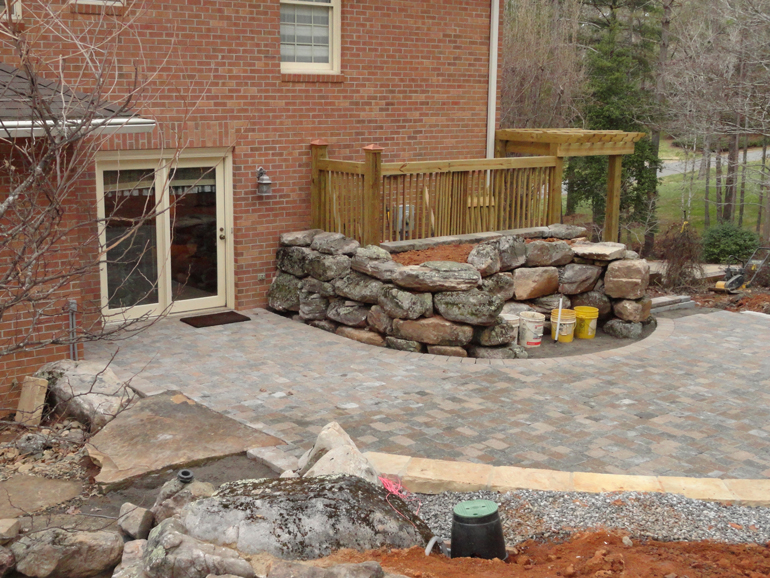 The clients can step right from the kitchen onto this paver patio. PHOTO: Appalachian Naturescapes

Design is very important at Appalachian Naturescapes. Meyers compares the work he does to that of an interior decorator.

“You have to spend enough time to really figure out what they want and what their needs are to arrive at that special project,” he says. “We swing for the fences on every one of them.”

The problem, in this case, is that the clients weren’t sure what they wanted. It started with just jackhammering out the concrete and replacing it with something equally modest. However, as the three of them talked, they expressed concerns about the need to step down from the kitchen to the patio and about the drainage, as well. 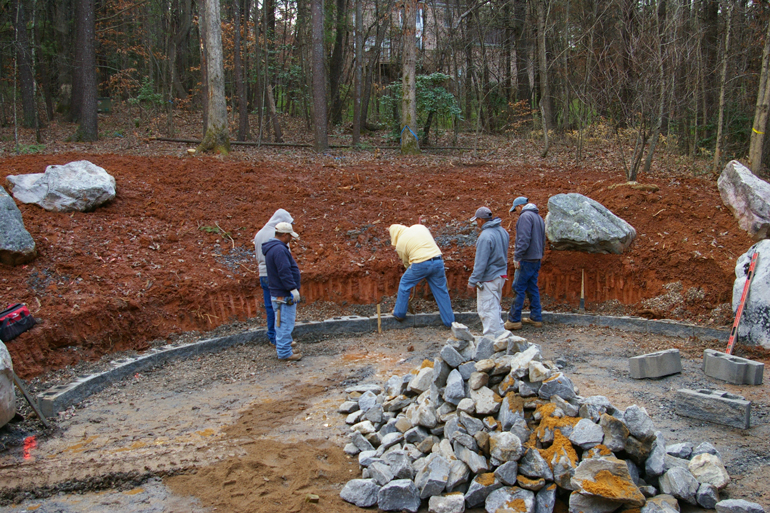 Crews worked to build a wall to retain the hillside. PHOTO: Appalachian Naturescapes

Once the conversation turned to raising the grade, Meyers suggested making the backyard area large enough to do all they wanted on it. The end result: a paver patio with grilling station, seating walls, a fire pit area and a water feature.

“You start asking questions and saying, ‘While you’re doing this, why not do that?’” he says. “You keep going back and forth until you come up with the right plan.” 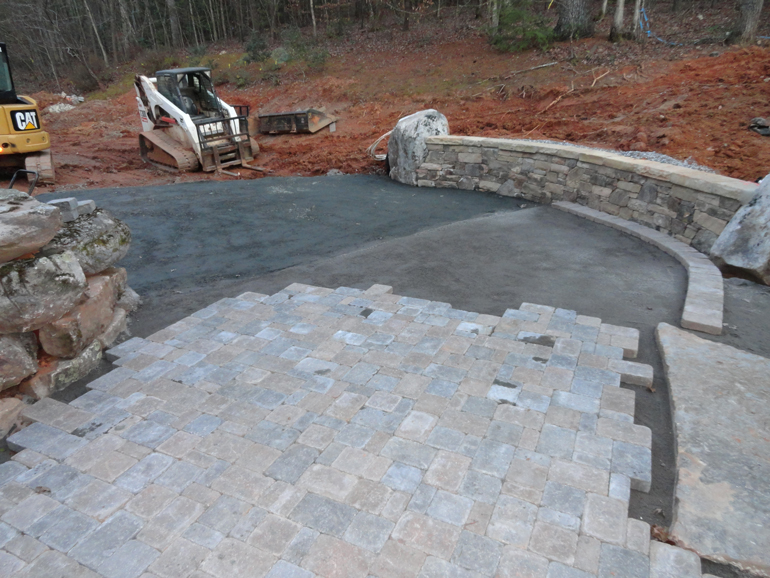 The retaining wall also serves as seating by the patio. PHOTO: Appalachian Naturescapes

In this case, the clients ended up getting their dream backyard, which Meyers describes as probably a 50-foot by 100-foot area. He estimates the clients had about a quarter acre behind the house, and because of the grading there was some push-back to provide enough room for all the work involved.

A key piece of the project is a 20-foot by 20-foot paver patio area.

“We built an arbor over part of it, and then to hide an ugly meter box where all the utilities go into the house, we built a grill station and planter,” he explains. “We ended up hiding a bare brick wall by using a lot of natural materials in our process, including various stones and native plants.” 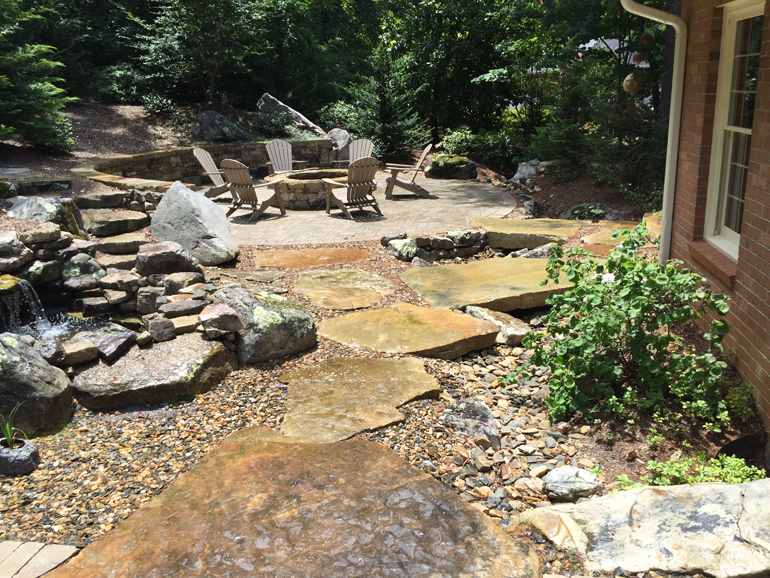 The stonework and native plants are some of the highlights for this project. PHOTO: Appalachian Naturescapes

Also done in pavers is the round fire pit area, which Meyers estimates to be about 15-feet by 15-feet. Several large slab stones provide a transition between the two paver areas. Meyers adds that most of the field stone used in the project was brought in from Virginia.

Helping to retain the hillside from the built areas are seating walls of the proper height, also made of stone. However, the clients added some Adirondack chairs for seating around the fire pit, which is plumbed for gas, although Meyers says the clients also burn wood in it. 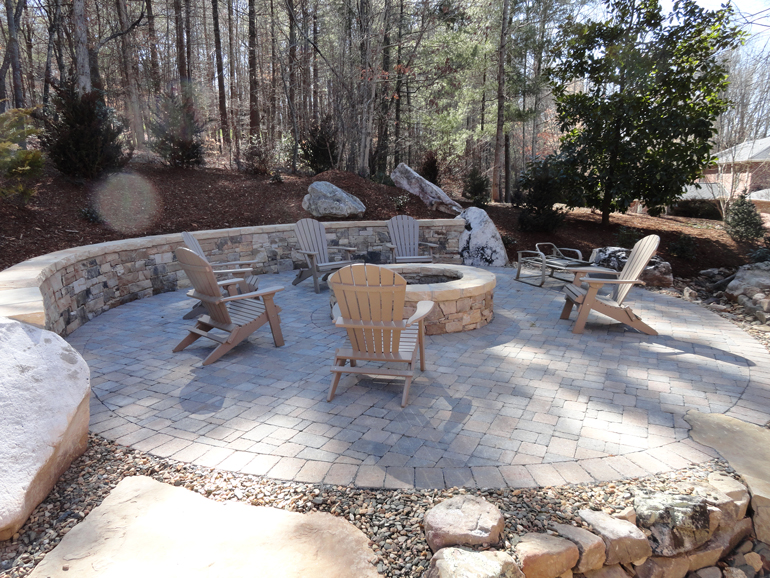 This project had a paver patio and fire pit with seating walls. PHOTO: Appalachian Naturescapes

Meyers says he had no compunction about using natural stone for the project, although the home is a brick one.

“When you’re looking out the windows you don’t realize you’re in a brick house,” he observes. “Whenever you add a new material, you have to make sure it doesn’t fight with the current materials, but the change in perspective allowed us to retreat from the materials used in the home all together. You just look out and see all the beautiful stonework.”

A before and after shot of the new stone paver patio. PHOTO: Appalachian Naturescapes

Nowhere is that stonework more evident than in the water feature, which Meyers says was really the last part of the design element and — he feels — pulls the patio and fire pit areas together while providing visual interest from the home’s dining room.

“We actually built sort of a moat between the house and the fire pit area because we raised the grade and we had to make sure it drained correctly,” he says. “It really became a streambed, which acts as the overflow for the water feature.”

Meyers particularly likes the big bridge stones that serve as pathways. He’s also proud of the fact that while the feature looks natural, it was built like a permanent structure and everything is concreted in. 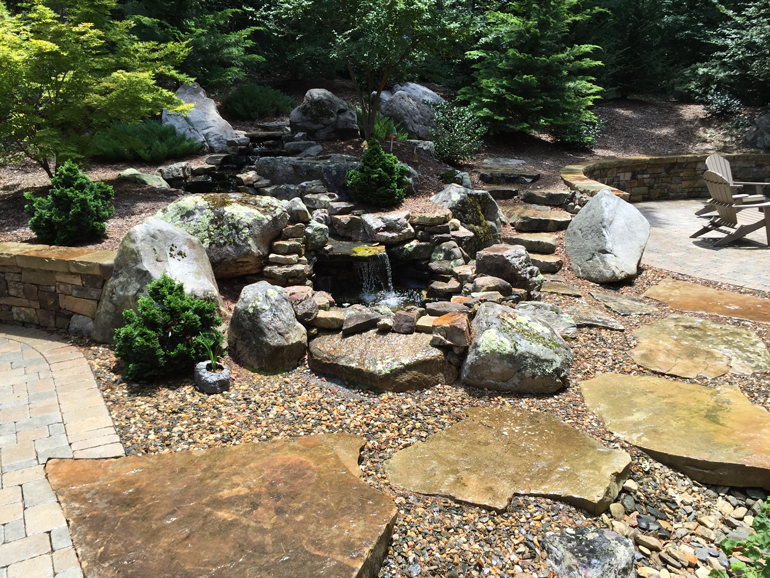 The plant palette for the project includes Japanese silver bells and Japanese maples as the focal point trees, with plenty of woody shrubs.

Good compaction on the site was critical because of the grading he says, although the biggest challenge with the project was the weather. The long design period meant that work on the site didn’t start until November.

“The weather was really challenging,” Meyers says. “When we were doing the rockwork we had to have shelters and cover the site at night so it didn’t freeze after we’d done our stonework. We also had to deal with snow and rain events.” 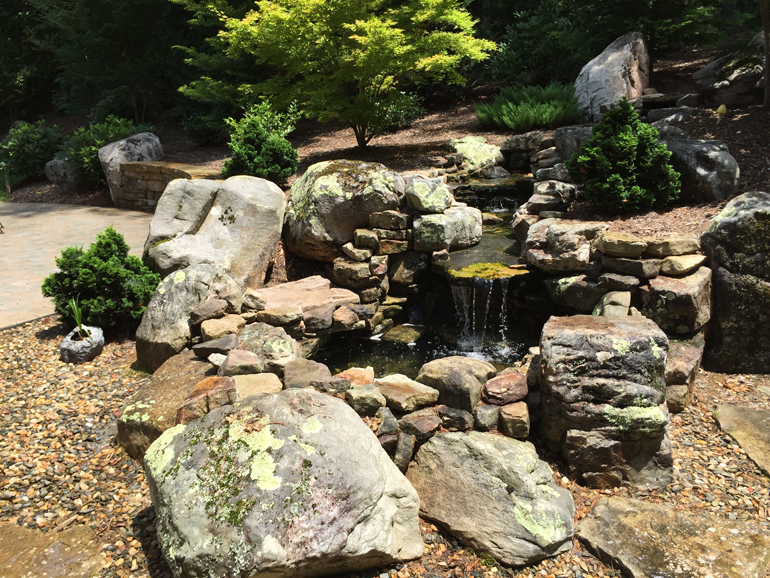 The stone water feature was one of the last installed designs for this project. PHOTO: Appalachian Naturescapes

Fortunately, he adds, the clients were out-of-town during the three-month construction period. During that time, the workforce on the site ranged from two to five men, with much of the work being handled by a three-man crew.

Despite the weather, the approximately $85,000 project turned out to be not only an award-winner, but also a success as far as Meyers is concerned. For one thing, he’s very proud of the relationship he developed with his clients.

“They have become some of our best cheerleaders,” he says. “I can’t tell you how much work they have personally helped us get since the project was completed. We had them go to Greensboro with us to accept the award.

“That’s really what it’s all about,” Meyers adds. “When you build good relationships, you’re going to have all the work you want.” 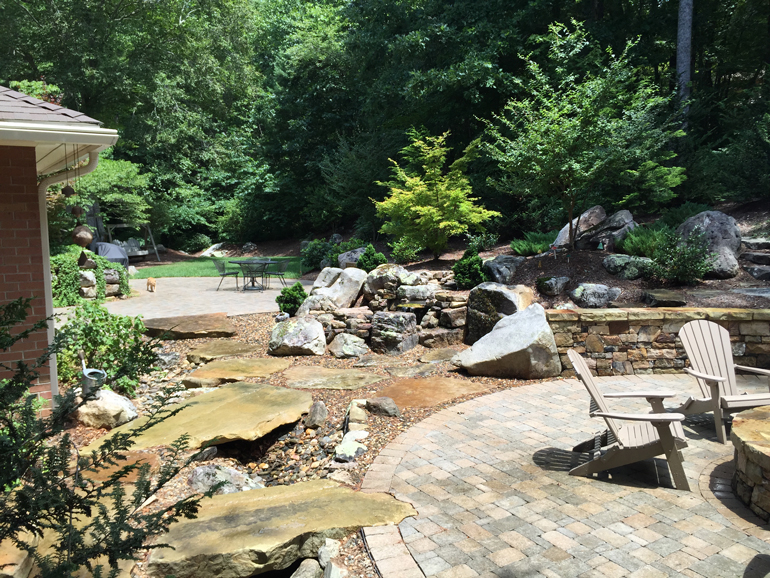 The paver patio fits in nicely even though the house is made from brick. PHOTO: Appalachian Naturescapes

And, he says, the project taught him to trust his own process. He admits that like many landscape design/build operations, he doesn’t charge enough for his design work, but the number one goal is to come up with a design that’s really special so clients will invest their money in the project.

“We drew this design three times,” Meyers concludes. “I had to push other people back, but we stuck to our guns and everybody was patient and waited on us. I let the project and the process dictate what needed to happen and it took us to this wonderful composition.”

Previous post Why Battery-Powered Mowers are in Your Future