John Mini Distinctive Landscapes wants to tell you that the micro landscapes of pocket (or vest) parks are not only possible, but mission critical for enhancing our towns and cities. Tending these small pocket parks tucked about in various nooks and crannies of New York City’s midtown district is one of the lucrative services this company has been providing since the 1970s.

These urban downtown pocket parks, many coming into existence in America’s older cities in the late ’60s to mid-70s, include terraces, courtyards, rooftops and parking ramps where any open spaces are a luxury, benefiting from the concept of “greening” them up.

These days, more and more people are living and working in urban environments. The small spaces within these unique cityscapes are filled with immense potential, and it’s the goal at John Mini to reveal the green opportunities hidden in these untapped spaces. 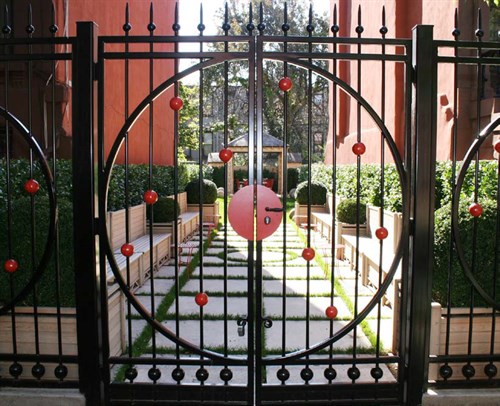 A growing number of municipalities and foundations across the U.S. are funding the pocket park concept as a way to create beauty out of the blight resulting from abandoned lots.

“The beauty and the benefits of nature may be lost in that sea of concrete,” says Jack Mascharka, senior designer with John Mini Distinctive Landscapes. “Yet on the flip side, subtle and purposeful touches of nature in a sea of concrete create exponential impact.”

A design approach for small spaces, John Mini is particularly fond of blending and “down-sizing” ecosystems in order to create unique and eye-catching displays. “In small outdoor gardens, it’s possible to make dynamic landscaping compositions into pocket parks through carefully grading multiple environments into one another,” Mascharka says. “An example of this design concept would be duplicating the palette of a wetland but then bordering it with a mini meadow.”

Currently, an increasing number of municipalities and private foundations from Seattle to Miami are funding the pocket park concept as a growing solution to the frequency of small, abandoned single to double lots created when abandoned residences, folded factories and shuttered strip malls get bulldozed in the inner cities. Creating beauty from blight and recreational amenities from neglect, an abundance of grants are being allocated to neighborhood groups to oversee these new mini landscapes – and many of them are seeking the guidance and leadership of landscape designers, architects, installers and/or maintenance crews.

One such landscaper hanging her hat on the pocket park opportunity is Akron-based Beth Vild, who also works in the Northeast Ohio region’s permaculture and community health space. Akron is making efforts to win back half of its population lost since the ’70s when its auto and tire factories closed. Part of the city’s tactics is to beautify and safety-proof its inner city neighborhoods surrounding its tidy renovated downtown. Both private and public monies have been made available for the creation of pocket parks.

Last year, Vild worked on a grant for the creation of Oakland Avenue Pocket Park for the West Hill neighborhood, an eclectic mix of historic Victorians and modest Section 8 apartments located between downtown and the tony Highland Square neighborhood. “The neighborhood needed a unifying green space to bring the diverse mix of people together,” explains Vild. “It also had to slow traffic, encourage children to come out to play, and provide a safe and inspirational haven for seniors and young families to congregate.”

Now in the pocket park’s second stage, round wooden benches in each corner of the lot, a circular stone performance stage, a free wooden library book nook, community bulletin board and edible plants including blueberry bushes are being installed to further lure local families to gather, enhancing the community vibe.

In larger cities, too, where mixed-use properties exist in abundance near the city center, pocket parks are important. No one knows this more than Erin Tharp, a registered landscape architect with her own landscape design firm, Tharp Design, in Morristown, New Jersey. She is also on the Landscape Architects Network team where she designs and often writes about notable urban landscapes, defining pocket parks (aka, vest parks) as mini oases in urban settings. Typically the size of one or two lots, they are usually classified as neighborhood green spaces designed with human activities in mind.

“They can be used as play areas, for taking lunch breaks, or even for small events,” she says. “Most importantly, they should be a place of quiet refuge and escape from the busy city life surrounding them.

The most successful pocket parks achieve a balance between this quiet escape and active meeting and play.”

Her favorite examples include two in midtown Manhattan: Greenacre Park and Paley Park designed by the late Robert Zion; South Garden at Art Institute of Chicago; and John F. Collins Park (formerly Chestnut Park), Philadelphia. All of these parks range from one-tenth to a half-acre in size.

New York City’s Greenacre is one of the smallest hidden parks in the Big Apple. Built in the early ’70s by designer Hideo Sasaki, a fountain and tunnel leads visitors to a 25-foot waterfall, completely blocking out city noise, thus becoming a calming oasis. Even smaller, the city’s Paley Park is one-tenth of an acre completely surrounded by skyscrapers. Designed by Robert Zion, the park opened in 1967 with a 20-foot water wall flanked by adjacent ivy-covered walls surrounding a food kiosk.

The South Garden is built atop a parking garage opening onto Chicago’s Michigan Avenue. Designed in the mid-60s by Dan Kiley, the high-rise park contains raised beds and honey locust and cockspur hawthorn trees giving way to a rectangular pool and the relocated historic Taft sculptural fountain.

Even though pocket parks may be small, this by no means limits their large significance for landscapers. Their size not only makes it easier to design, install and maintain, but they also act as a 24/7 marketing vehicle for a large audience of visiting urban residents and business leaders needing services for their own landscapes.