Heidi O’Neill has been designing award-winning landscape projects long enough to know that sometimes solving what on the surface may seem to be unrelated issues can get clients the landscape of their dreams.

A good example for the owner of the Novelty, Ohio-based O’Neill Landscape Design and Installation LLC, would be the project she completed for the Haas family. Although they were looking for a backyard pool, it required solving an access issue to the family’s backyard. 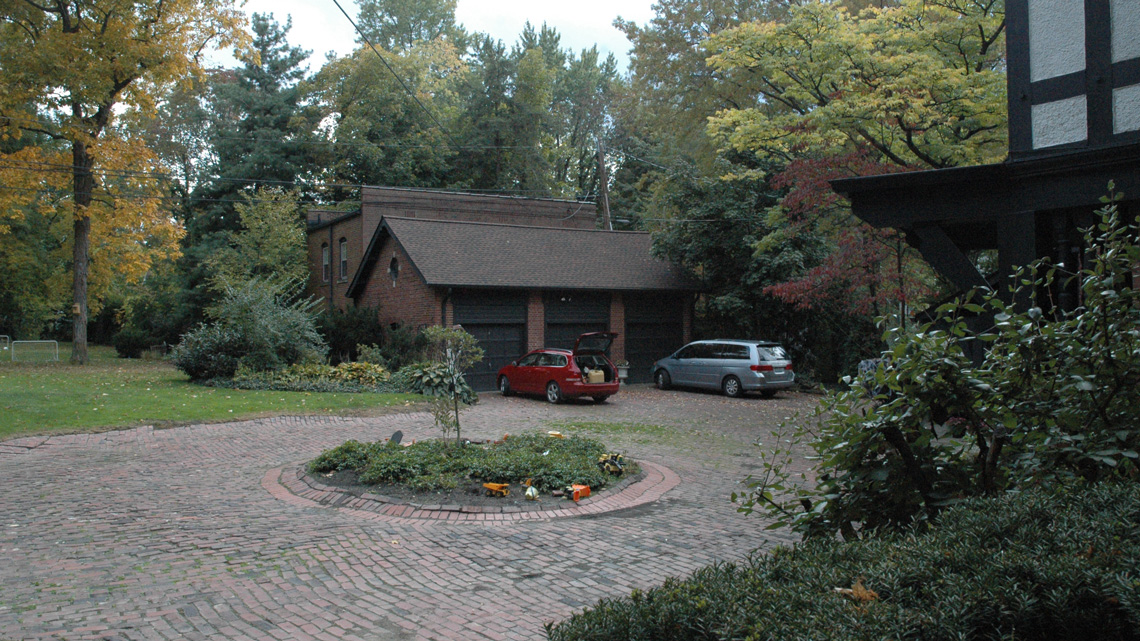 Adding to the challenge: the home is almost 100 years old and the new owners wanted anything done on the property to look as if it came from approximately the same era.

O’Neill’s innovative solution earned her a merit award from the Ohio Landscape Association for a residential installation with a pool — but then the clients initially called her after becoming acquainted with some of her previous OLA-award-winning efforts.

“This was a family with young children,” she explains. “They had moved in not long before that, and they were looking for a pool.” 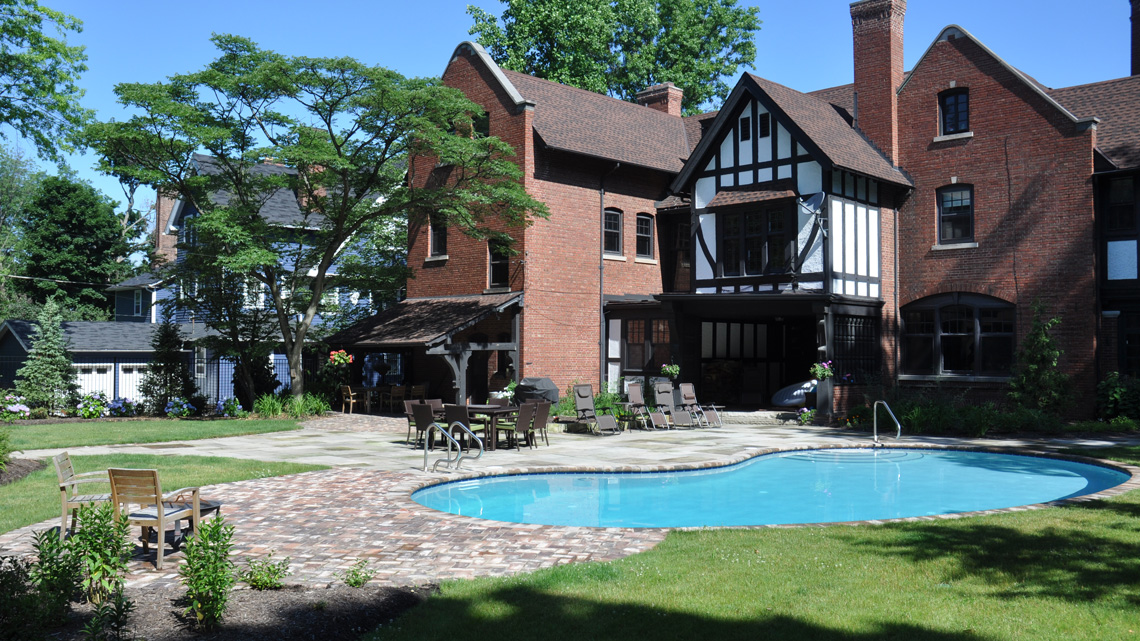 Despite being a large corner lot, the site presented a couple major issues. The rear of the property backs on a small service lane popular with pedestrians that seriously reduced privacy. And, the home’s driveway, coming off that service lane, went into a large brick paver circle before entering a former carriage house that serves as the garage.

“It ate up all their space,” says O’Neill. “They had a little covered area outside the kitchen, and that was about it. They knew their parking and driveway didn’t work very well, so we looked at the whole picture of how to make this work.” 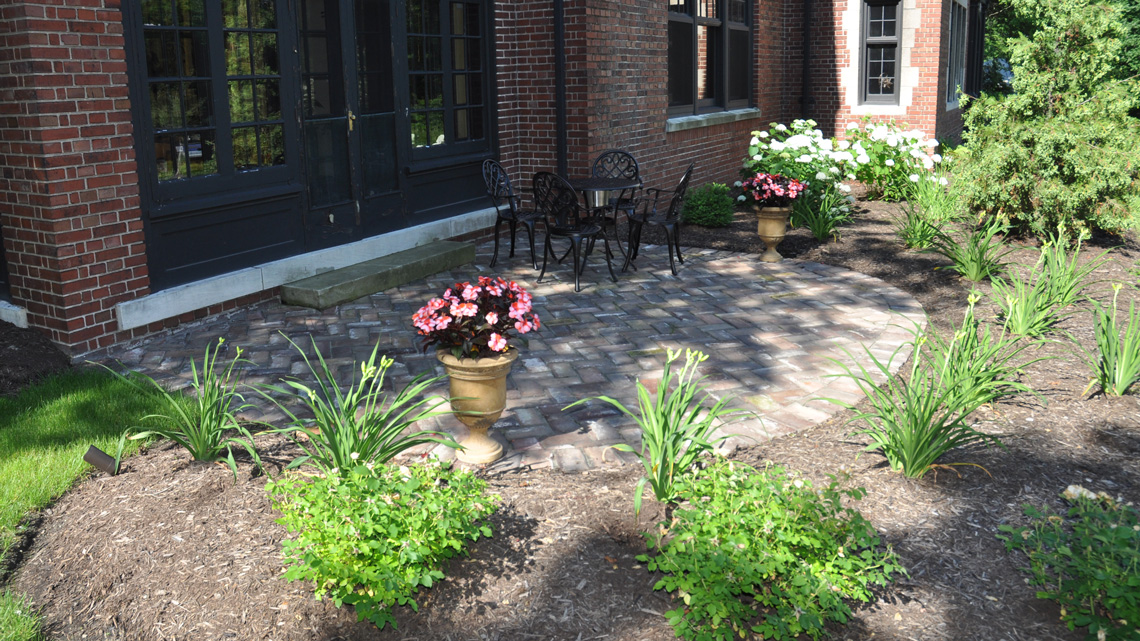 Ultimately, O’Neill developed four different concepts before the clients opted to do a major renovation, all the time focusing on a result that looks suitably aged.

O’Neill began by removing the brick pavers and reorienting the garage. 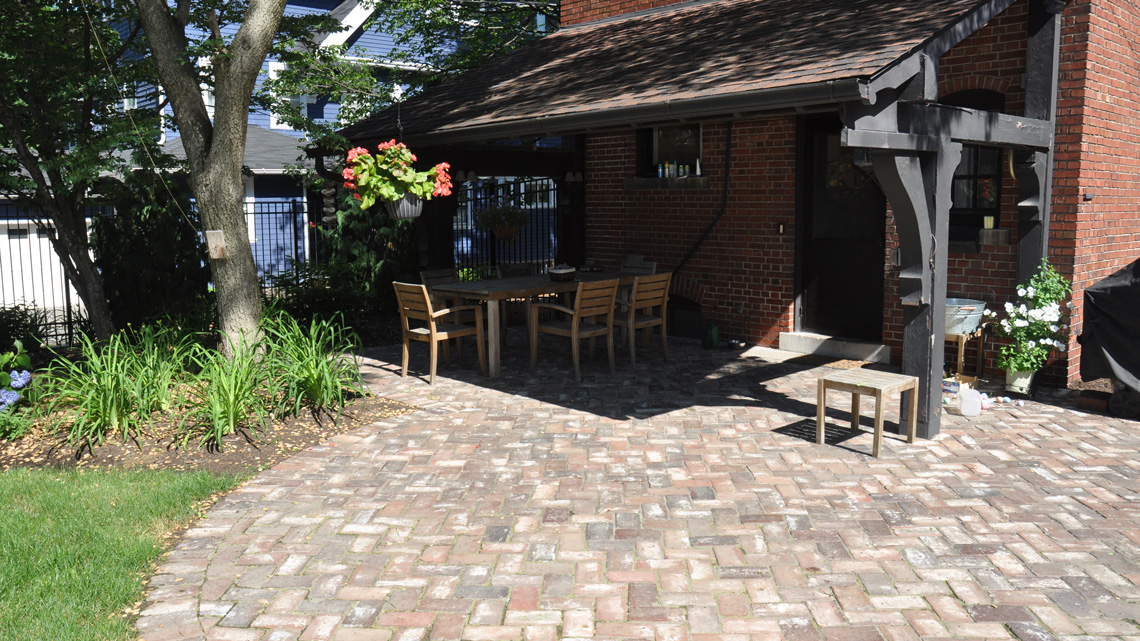 By getting the paver circle out of the backyard, that allowed plenty of space for a salt-water pool and patio, as well as seating areas and a moveable fire pit. One of the bays in the carriage house, which also has an upstairs apartment, was utilized for the pool equipment.

“Because they didn’t want something like new concrete pavers, we repurposed the old brick pavers for part of the pool decking,” O’Neill says. “Then we also used old sidewalk stone from the area for the rest of the patio. They’re kind of chipped and worn, so it’s not a perfect look.” 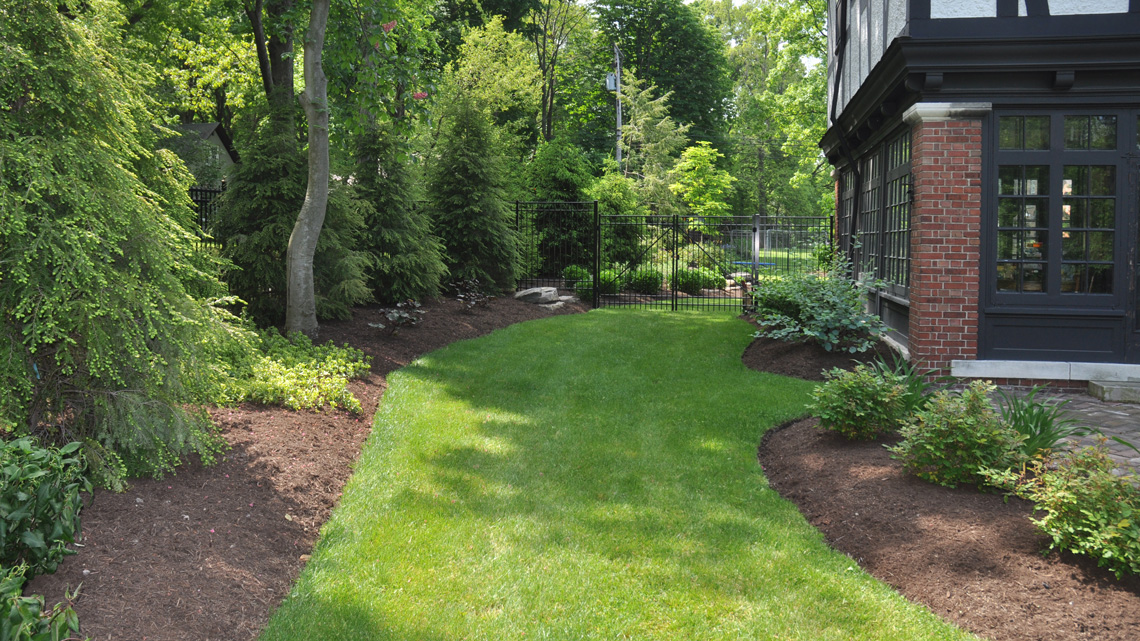 O’Neill had been hired to renovate the entire property, and there were enough brick pavers from removing the parking circle that she was able to redo the entire front walkway in brick, as well as create another patio with a seating area in the front of the house, and circulation around the home.

By grading the property, O’Neill also changed the elevation. In the front, the result is a short retaining wall that adds interest to the landscape. The backyard grading was a bit more extensive. 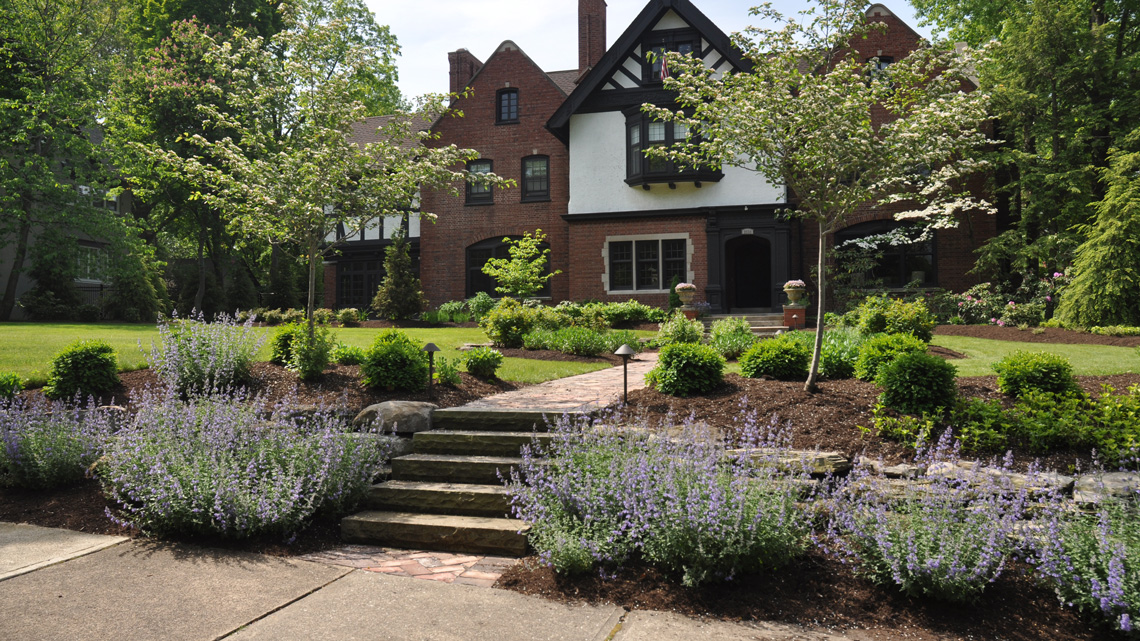 “We built it up so it’s probably three feet higher than it was,” she says. “We put a retaining wall along the lane, and a fence on top of that and then started planting. We got a lot of height out of our plants even before we began and that helped a great deal.”

The plantings emphasize shrubbery and evergreens.

“They had a beautiful amur cork tree in the corner,” O’Neill says. “It’s an unusual tree and we were able to save it. There was also a dogwood we saved. On the other side of the house, the neighbor has an even bigger house that looks down into their space, so we came in with some 14-16-foot evergreens. It doesn’t begin to screen the house, but it gives it a jump start.”

The excavation also turned up some unexpected finds. One was several old stone windowsills.

“I knew they were windowsills because they had a slight pitch to them where the rain would have shed off,” she says. “I used those to make an herb garden by standing them on edge.”

The other involved the structure at the backdoor drop-off area. O’Neill describes it as a shady space covered in 8-inch by 8-inch terracotta tiles. 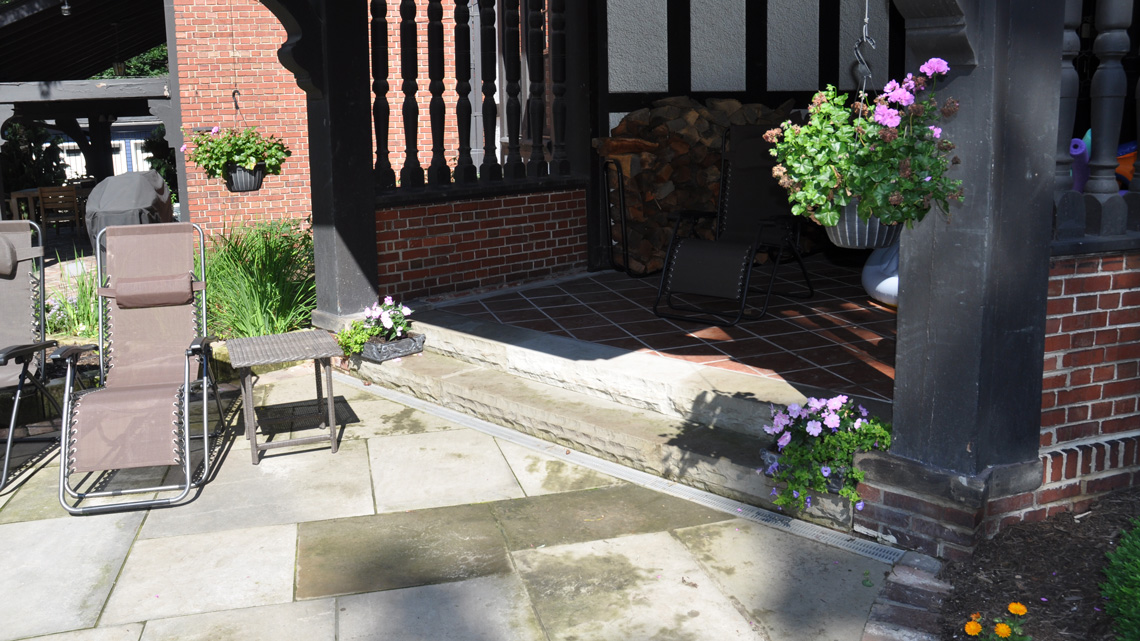 “The tiles were cracked and the steps were cracked,” she relates. “It was one of those things where when you open it up you open up a can of worms. We had to rebuild that entire covered area and reinforce the steps. Fortunately, we could match those old tiles, so we could put them back the way they were.”

Ultimately, she adds, it was a project that required a great deal of research. However, that’s not the biggest challenge the project presented.

“The biggest challenge was separating out the vehicular traffic and pedestrian traffic,” O’Neill says. “There just wasn’t room enough for both. We even looked at putting a drop-off circular drive in the front. Instead, they opted for a very small driveway that goes to the carriage house.” 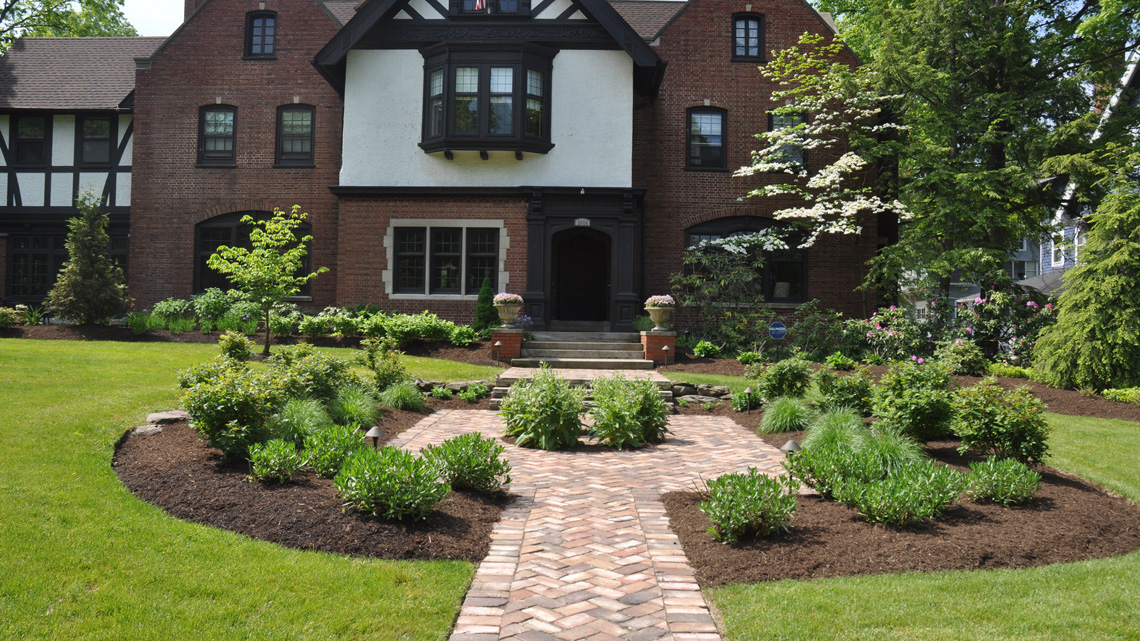 It was the carriage house that also presented O’Neill with a huge learning opportunity. Or, as she says, “I also learned you can run into anything.

“The carriage house was not typical construction,” she explains. “One of the bays held the heating system, and it was a huge boiler. We had to work around that, and we had to redo the electrical work for the entire space. Then, there was the matter of getting garage doors to fit. It really taxed my carpenter and electrician.”

As it was, O’Neill says the project took an entire summer, and utilized contractors for landscaping, pool construction, electrical, plumbing, carpentry, excavation, masonry, fencing and concrete, plus her plant supplier. 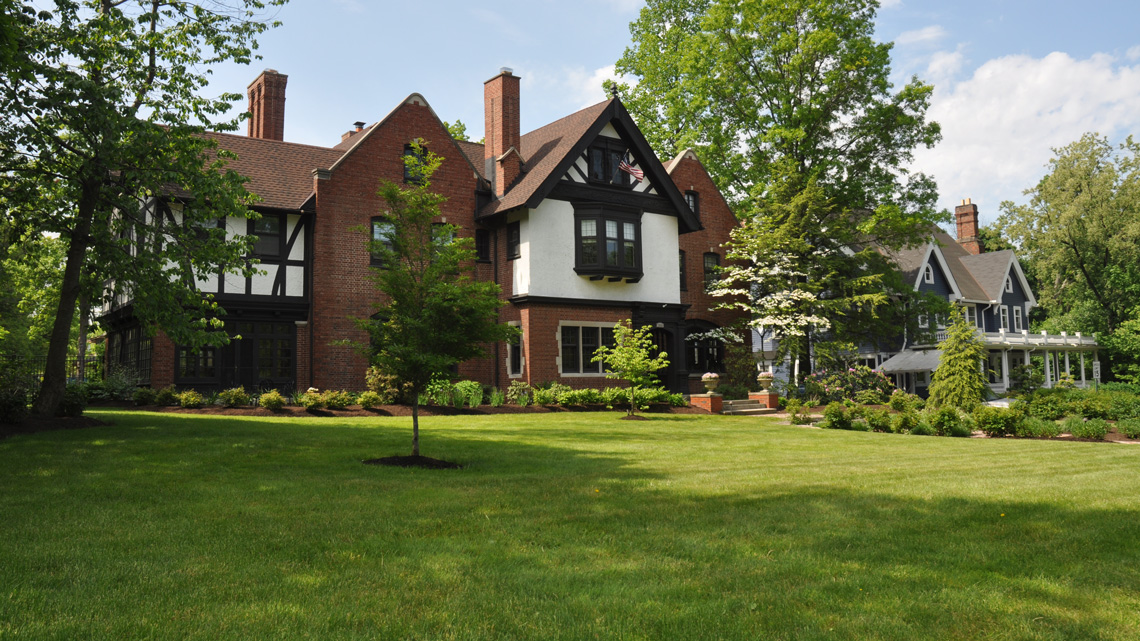 However, it’s also a project of which O’Neill is very proud.

“I’m happy that it looks as if it belongs there,” she says. “And, I’m very happy when I drive by that house and I see them enjoying the yard because they couldn’t before. That brings me a lot of pride.”

O’Neill says she also likes that the area has become a neighborhood hot spot, and she wouldn’t mind going back some day and enhancing the backyard further with an outdoor kitchen. She knows just the spot.

“It’s a narrow kind of space, and they haven’t done much to it,” she says. “I do talk to them occasionally. Maybe someday.”