Story of a Landscape: Retirement, Wedding Cause Prompt Backyard Renovation

The project was completed in about seven months to meet a backyard wedding in the fall.

There’s nothing nicer than having a long-time customer come in and say he wants to do a little upgrading of his backyard. That is unless the little upgrade turns in to the addition of a pool and outdoor kitchen.

However, larger project or not, Landscape Design Services, Inc. faced one looming problem when it took on a project later dubbed “Miller Park”: a mid-September family wedding for which the job had to be completed.

Kelly Karp, the project’s designer, says the company has been working with the Millers for at least a decade, and had previously done work both at their business and then in the front of the home in Holland, Michigan.

“The backyard was kind of the end of the house project,” he says. “They hadn’t done much with it. It was pretty much natural and they just left it that way. Then, when Mr. Miller retired, he decided he wanted to make a little something in the backyard.” 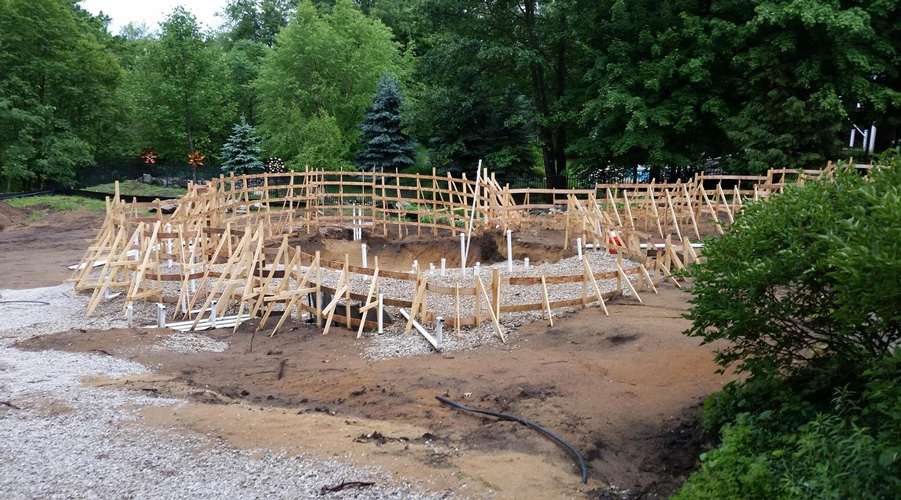 The two men started working on what was originally planned as a small patio and upgrade to the lawn in October. However, as the client began looking through magazines and the internet, Karp says he began compiling ideas.

“That was when he came to me and said, ‘We’re going to up this a little bit,’” says Karp. “We worked on it over the winter and came up with a new plan which was quite a bit of change. Fortunately, it was helpful to see the photos he had and then just bring the ideas together.”

Just how much change was involved? Well, consider a free-form pool fed by a recirculating water feature, a new outdoor kitchen, a fire pit and a replacement deck off the main floor of the house overlooking the backyard are all key parts of the finished project.

“The scale of the project needed to be large enough to entertain large groups, but intimate enough for individuals, as well,” says Karp. “This was accomplished by using a free-form design that created ‘rooms’ with specific uses.” 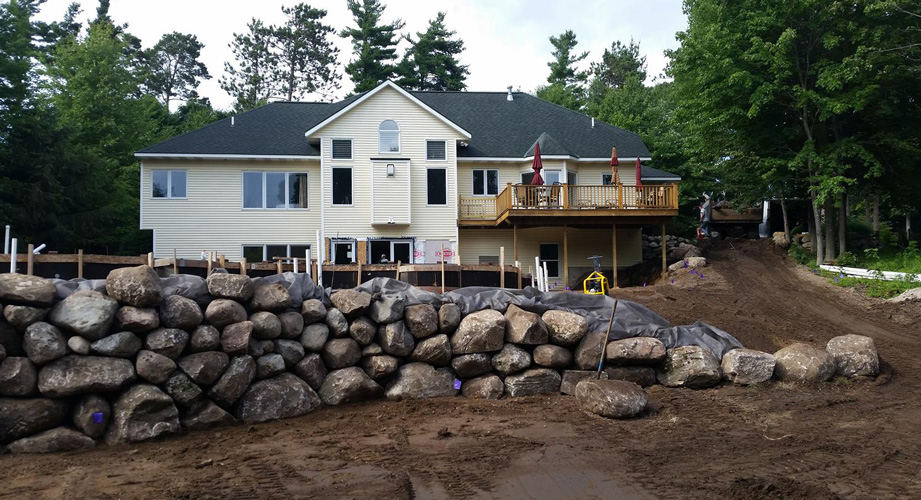 Perhaps the most impressive feature is the pool, which the owner visualized as a western mountain-style scene. Once the two men had the concept idea, they worked closely with Blue Water Pools of Grand Rapids, Inc., on the details and construction of the pool.

“He wanted that dark black water, and he liked the free-flow feel of the pool shape,” says Karp. “We had talked several years ago about installing a waterfall from the front of the house to the back, and when this project came together, we made the waterfall a part of the pool itself.”

He explains that a grade change allows for a “raised” pool at the basement walk-out level. A six-foot boulder wall was used to transition the grade. The grade change also allowed the pool fence to be installed at the bottom of the wall, leaving an unobstructed view of the natural area at the rear of the property.

Because of its free-form shape, it was possible to create spaces for a beach entry, in-water bar stools, a deep-end activity area, as well as the stream feature. 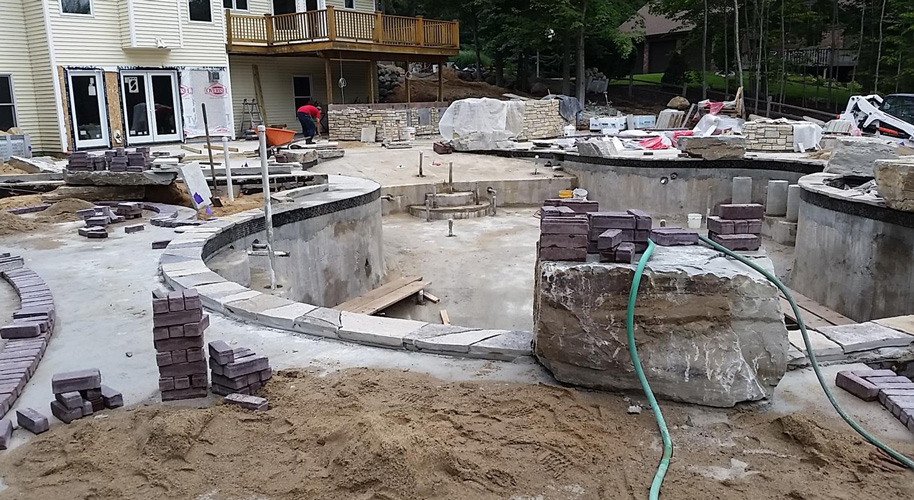 Karp says the wall is all natural Michigan boulders, just as the material for the stream and waterfall are natural river rock. The jump rock is a Cedar Falls ledgestone, while the project’s pavers are a Unilock product called Yorkstone.

Because of the significant amount of grading done to install the pool, including the addition of some 300 yards of sand to the site, Karp says compaction was an issue. To further secure the area against settling, concrete was poured around the entire pool, an inch of sand was laid as a base and then the pavers were dry-set on that sand bed.

Another challenge to the job was the placement of the pool equipment. The Millers chose to install a new second floor Trex composite deck with a steel cable railing and move its access staircase from the center of the home to the end. The area below the deck and behind the outdoor kitchen created a space where the equipment wouldn’t be visible and remain close to the pool.

“I said, ‘Why not build a little room there and put the pool equipment inside?’” Karp says. “It really worked out well because we could keep it ventilated, it’s out of the way, and it has lent itself to some storage, as well.” 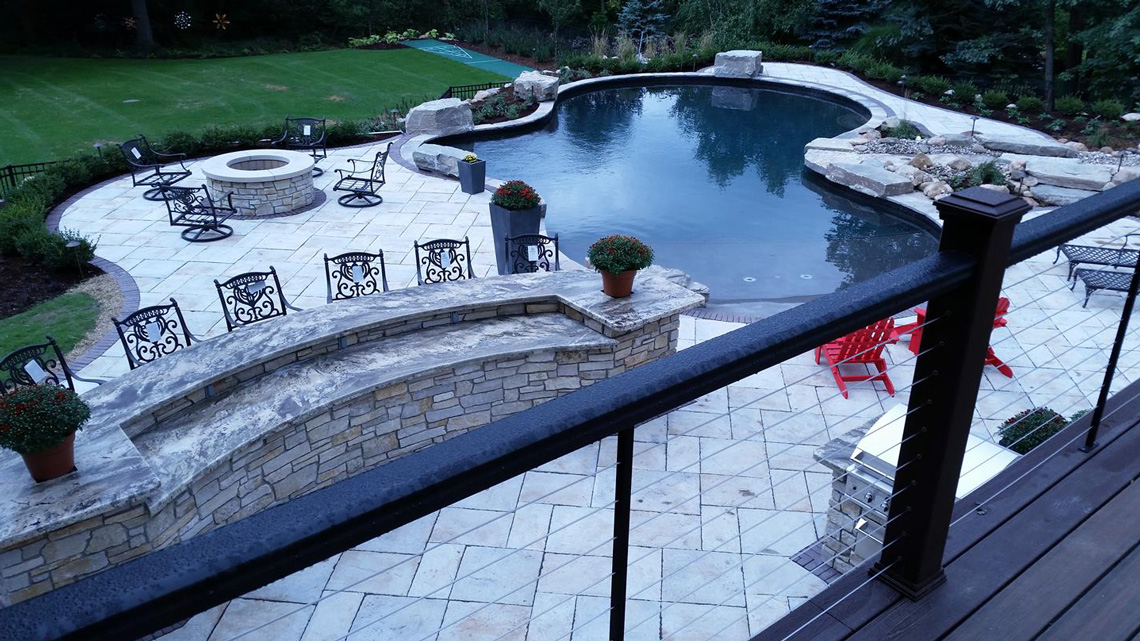 The room is also equipped with a rain channel ceiling and gutter that drains out through the underground drainage system.

With the use of Trex for the new deck, it only made sense to also incorporate that into the kitchen pergola, as well, Karp says.

“We really wanted something that was no maintenance,” he says. “It’s got that same composite style to it. We had talked about doing cedar at first, or white painted wood, but those require maintenance. This worked out much better and ties in with the decking.”

And, he says the pergola also has a shade cloth that can be rolled out to provide additional cover on hot days.

The kitchen itself includes a two-level bar, grill and warming drawer, an outdoor TV and sound system. The stone used to face those features is the same that was put on the front of the house when it was built 15 years ago.

“That’s really what this whole place is about,” Karp says. “They’re very people-friendly and they have a lot of family parties and activities through their church. The kitchen was a big piece of the project and we wanted to make sure it was usable to a lot of people.”

Lighting for the project includes path lighting around the patio, and selected up-lighting on some of the trees, particularly at the rear of the property.

“There are some significant trees back there, and by using some big up-lights it really brightens the background at night,” says Karp. “We used an Alliance Outdoor Lighting USA system and including an astronomical timer that automatically adjusts as the days and nights change.”

Plantings for the project put an emphasis on color, Karp adds.

“We used boxwoods in there to create some evergreen spaces,” he says. “It also frames the color around the pool. We also used a combination of plant materials to get flower color at different times. Color was a big thing to them, so it pops throughout the season.”

Work began on the actual construction in March, and met the mid-September wedding deadline, although Karp says as the deadline approached there were as many as 30 subs and Landscape Design Services employees on the site.

“There wasn’t a lot of parking on the road for awhile,” Karp says with a laugh.

Nor was that the only challenge the job presented. Access to the backyard was through a space between the garage and some existing trees that was only wide enough to accommodate a pickup.

“We couldn’t get large equipment back there,” he says. “And, our access was where the stairs for the deck came down, so one of the last things we did was take out the access to the back and build the steps. Everything had to happen for this to take place.”

The project was also a learning experience for Karp. With subs providing the pool installation, electrical, mechanical, plumbing, masonry, irrigation, fencing and deck/pergola portions of the job, he says scheduling and management also required a great deal of thought.

And, then there was the gas meter, which also had to be re-sized.

“The gas meter was just sized for the house, so it was about 250,000 BTUs (British Thermal Units),” he says. “But, when you put in a pool and a heater, you really have to upsize things. Then, there was the gas fire pit, as well. The one we have out there now is 600,000 BTUs, but we definitely had to take that into consideration.” 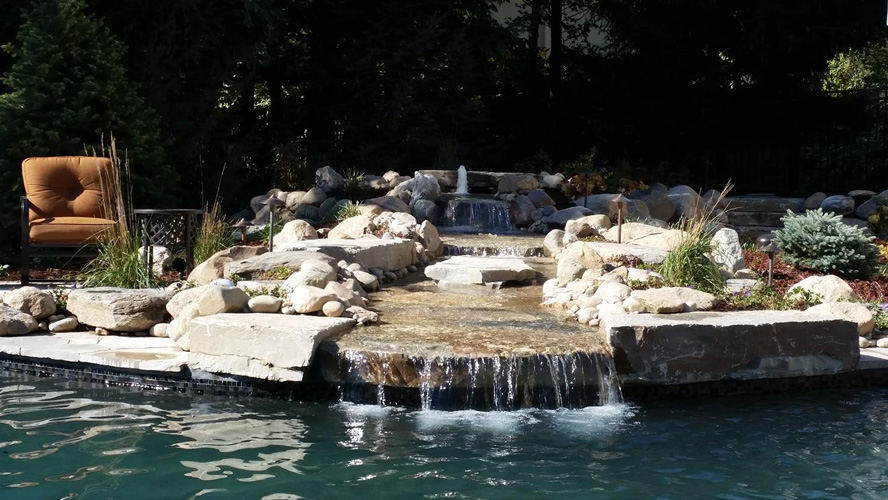 Not surprisingly, Karp is very proud of his work for the Millers, which earned him and his company the award for Best Residential Landscape Design and Installation of more than $60,000 from the Michigan Nursery and Landscape Association.

“I really enjoyed this entire project,” he concludes. “The thing I’m most happy about is how much enjoyment everybody gets out of it. It has a lot of neat elements to it, but what really brings a smile to my face is seeing people out there using it and having fun.”

Previous post How One Landscape Professional Puts Drones to Use