Story Of A Landscape: Renovating Enclosed Courtyards Without Access

No access means no problem for Monello Landscape Industries for enclosed courtyards at senior living facilities.

Joe Monello is not a man to rest on his laurels. The owner of Wayne, New Jersey-based Monello Landscape Industries LLC has some pretty good commercial clients, but he’s not taking them for granted.

One of his best is CareOne, a company that owns more than 70 acute nursing and assisted living facilities in Massachusetts, New Jersey and Virginia. Monello Landscape not only does maintenance for CareOne facilities, but also renovates several of its landscapes each year. Last year the company renovated 11 such facilities.

Monello admits that the renovation work always includes certain elements, such as an outdoor kitchen and entertainment area, a water feature, shade structures and plenty of seating. However, new for 2016 were a couple new landscape additions: a second, large water feature near each facility’s front entrance, and a sensory garden. 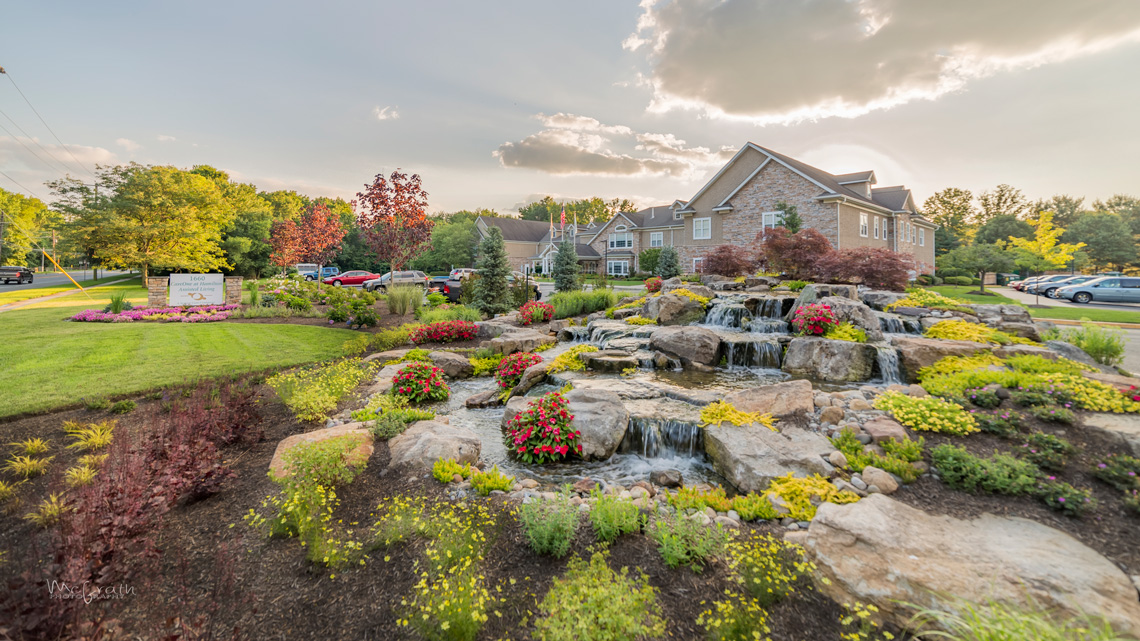 The two companies first gave them a try at CareOne at Hamilton Assisted Living in Hamilton, New Jersey, and the combination was enough to help Monello earn an honorable mention from HNA in the Combination of Hardscape Products Commercial – less than 20,000 sf category at the 2017 Hardscape North America tradeshow.

And, the award came despite the challenge of Monello’s crew having to crane everything in and out of the enclosed courtyard.

“This one was approximately 30 feet by 40 feet,” Monello says. “Some of them are smaller, and some are much bigger. However, there was no access through the building. We had to crane in excavators, bobcats, all our materials and when we took out the existing trees and concrete, we craned them back out in big Super Sack containers.” 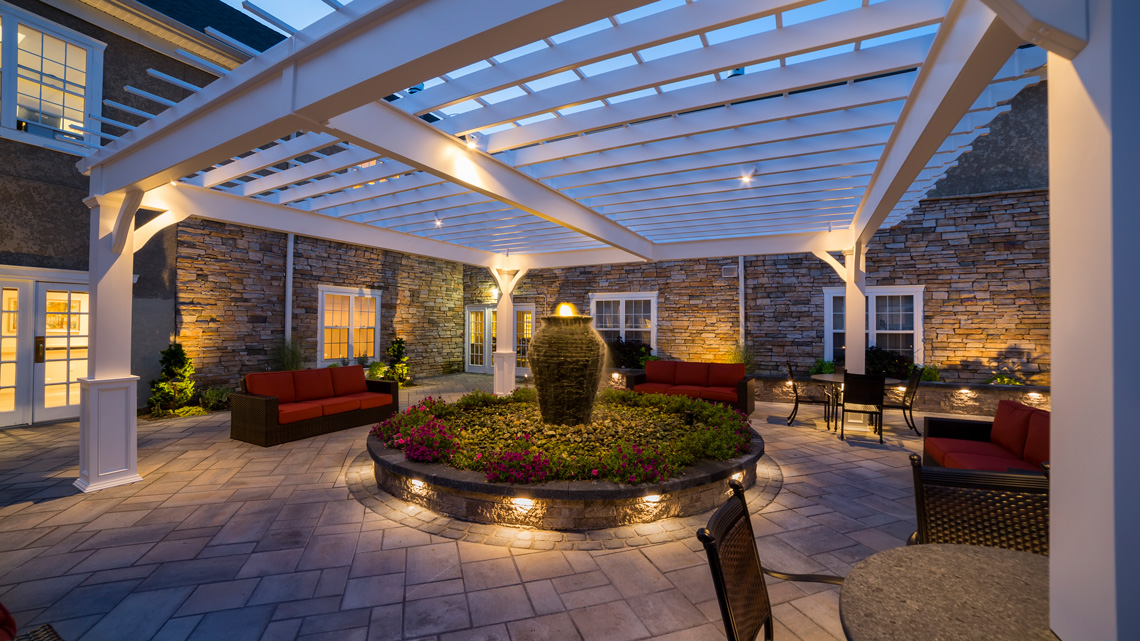 The major component on these projects is pavers, and Monello says the largest part of the Hamilton project utilized a Techo-Bloc product called Blu 60 mm slate walkway pavers.

“We only use Techo-Bloc smooth surface for wheelchair users,” he says. “We use different colored smooth pavers in the seating areas to give those areas an inlay-look for contrast and contour. There’s also a border material called Villagio that we use for the edging that gives a nice finished look and defines areas.”

As part of the paver work, Monello always installs the CareOne logo in a different color.

The seat walls were built from another Techo-Bloc product: Mini-creta. Other stone products making their appearance in this project include an EP Henry veneer over concrete block for the outdoor kitchen and seating bar, and plenty of black granite for the kitchen countertops and bistro tables. 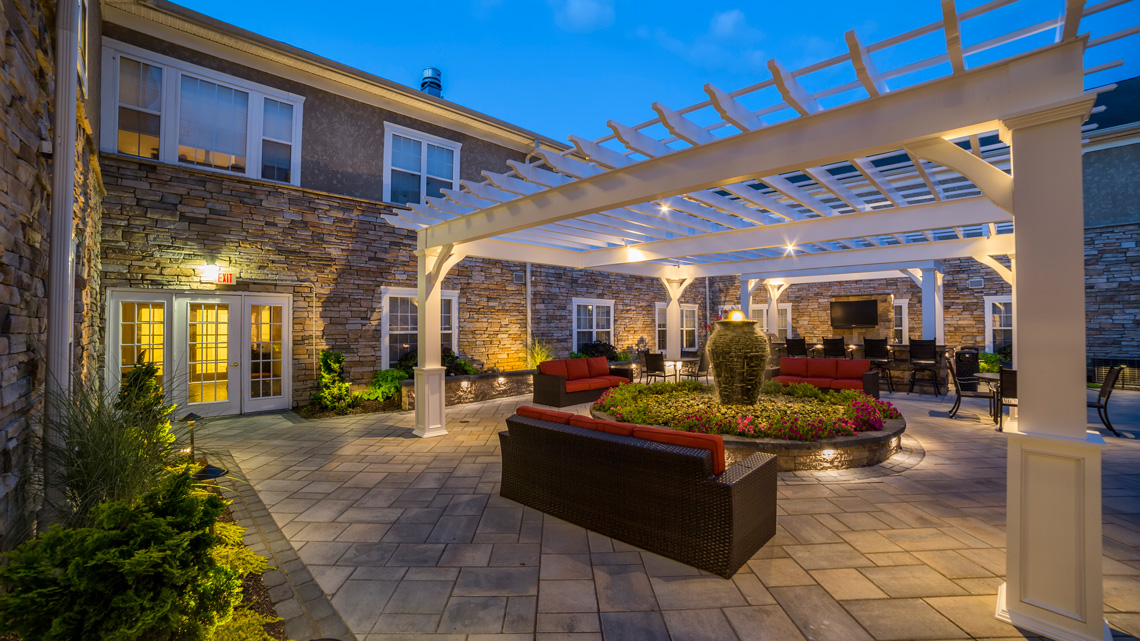 “We used a leather-finish black granite, so you have some coarseness to it; it’s not a smooth texture,” Monello explains. “It’s also a texture that’s good for outdoor use because plates and glasses don’t slide off easily.”

Other primary features in Monello Landscape’s projects for CareOne include at least one water feature in the courtyard, and pergolas for shade.

“Many of the courtyards have two,” Monello says of the water feature. “This has just one, but it’s a four-foot tall bubbling urn.”

As for the use of pergolas for shade, Monello says they’re an alternative to putting in large trees. Along with the pergolas, the company supplies sun-protective mesh tarps that are custom-made and snap on and off. Because Monello Landscaping is responsible for the maintenance, they’re put on in the spring and taken off again in the fall. 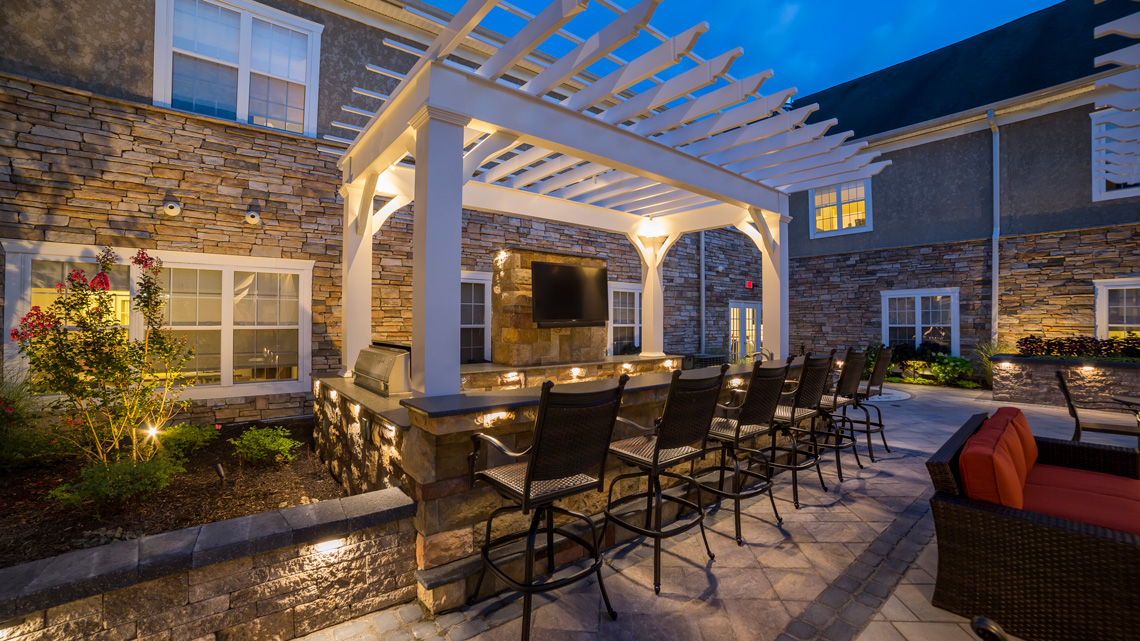 “We do foundation plantings where we use a lot of perennials,” he says. “We like to use a lot of colorful plants. We never put in shade trees because the leaves can be problematic for maintenance, and then there are the roots and the possibility they’ll outgrow the area. We use ornamental trees that top out at 15-20 feet.”

He cites Crepe myrtles as a good example of the tree palette.

And, then, there’s the sensory garden. Monello explains that CareOne had begun outsourcing people to come in and teach residents about different plants, “and we just took it to the next level and designed these courtyards to have sensory gardens built into them.”

The idea behind a sensory garden is to stimulate all the senses and, in this type of facility, to be wheelchair accessible, as well. By building up the garden area using the mini-creta product the residents will be able to do their own gardens.

“We’re now developing a program where we’re going to be teaching the residents about the sensory garden plants,” Monello says. “We’ll help them plant them and learn about the different types of plants and why they’re in a sensory garden.” 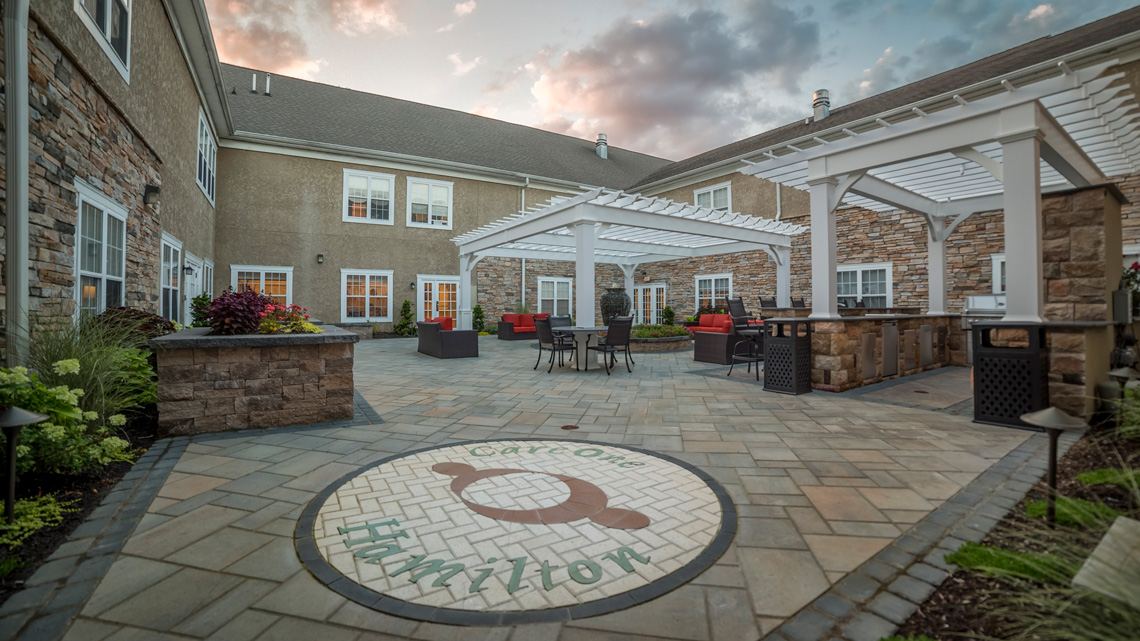 Because this is an enclosed courtyard, drainage and irrigation were also important components. Monello says the job required putting in new systems, although the company was able to tap into the existing drainage system.

“We typically use center drains with 6-inch iron grates,” he says. “These are custom-made grates shaped like leaves.”

While Monello Landscape was rebuilding the interior courtyard, the company was also giving a facelift to the area around the facility’s front door. The highlight of that work: a large water feature incorporating both boulders and plantings that is Monello’s favorite part of the project.

“It’s the first of its kind,” he says. “Now it’s a standard with the organization. We call it ‘curb appeal’ and it’s become something of a hallmark for the organization. When you’re out driving, you know it’s a CareOne site because of the water feature. They’re a great eye-catcher.” 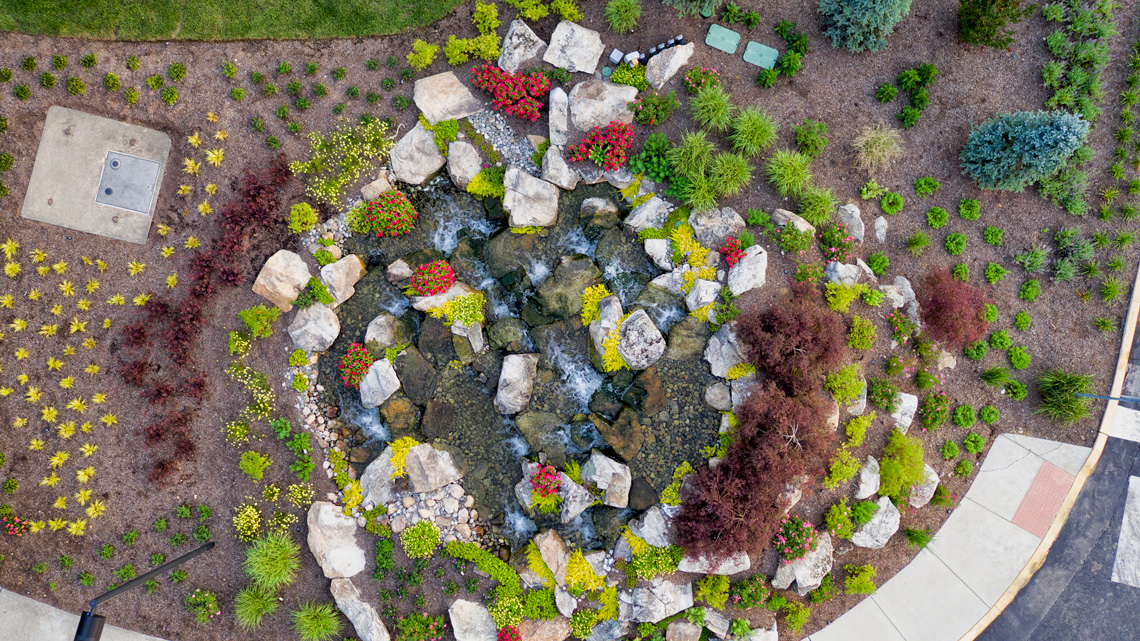 The rest of the exterior work includes plantings, sodding, irrigation and lighting. Monello says his company did a lot with lighting, both in the courtyard and on the exterior, and it’s a company specialty.

The front of the building features a mix of up-lighting and downlighting, as well as path-lighting for pedestrians. And, the water feature is extensively lit with various kinds of lighting, including some submersed in the water itself.

“Inside the courtyard, we used probably another 50 lights,” Monello says. “There’s downlighting and up-lighting on the pergolas, lighting in the kitchen, and plenty of lip lighting in all the walls. We love the way it looks under the coping.” 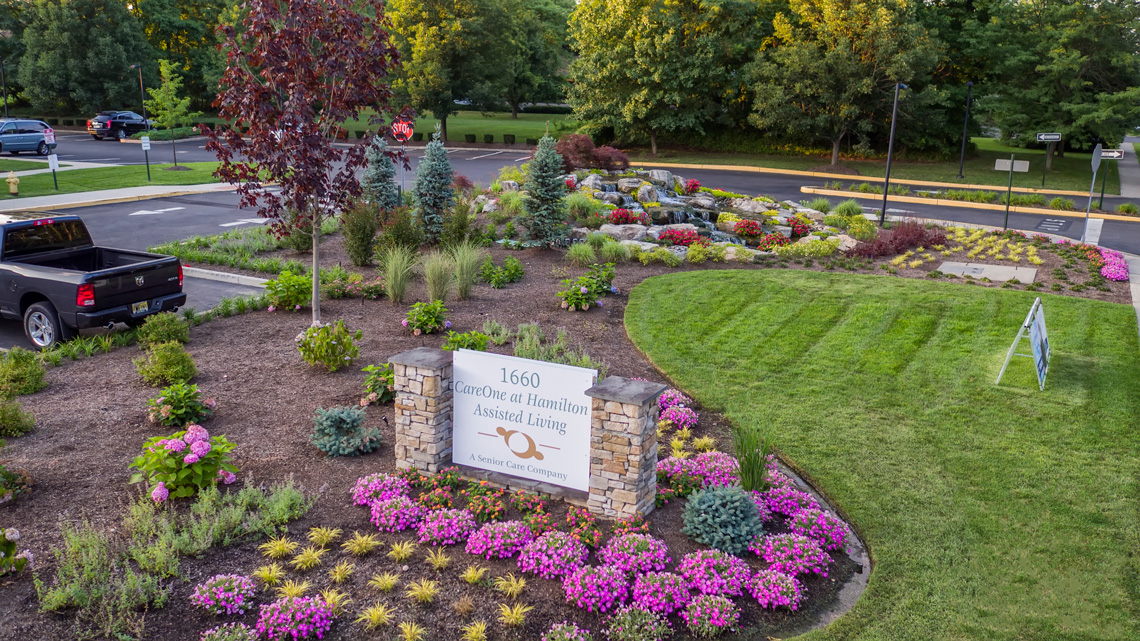 And, perhaps more so because Monello Landscape always has a 60-day completion schedule on its CareOne jobs — crane or no crane. To meet those deadlines, Monello says the crews on a project can vary widely.

Not surprisingly, he’s also very proud of this job, and not just for the award.

“I’m proud of the use the residents get from the courtyard,” he concludes. “They love it and use it. I love that their families have a place to go and gather, and I love the aesthetics of it all.”

Next post 3 Trends That May Disrupt Your Workplace Forever