Creating a peaceful rosary garden in chaos of high school

The Rosary Garden at Archbishop Spalding High School was certainly a labor of love for Steve McHale, co-owner of McHale Landscape Design with his brother Kevin, although it cost him in time and materials.

His recompense? A peaceful spot among the chaos of the school that’s educated his four sons, and recognition from the Landscape Contractors Association Md., D.C., Va. Chapter in the form of a 2015 Distinction Award for a commercial landscape installation.

McHale first conceived the idea of an outdoor chapel within the school’s footprint several years ago.

“As a member of the board of the directors for the school, one of our goals is to continue to strengthen the Catholic identify of the school,” McHale says. “The rosary garden was my idea of helping to accomplish this goal.” 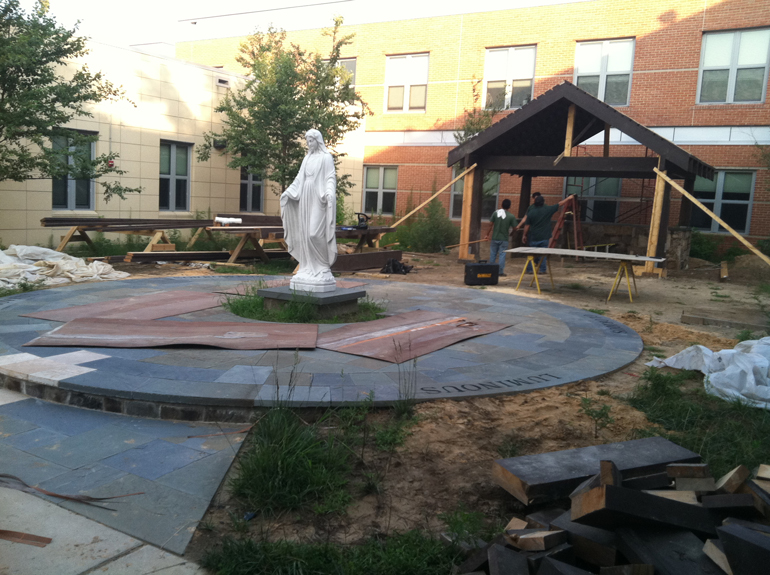 While the school worked on upgrading its other facilities, no good location for the garden could be pinpointed until, on a spring visit to the campus in 2013, McHale happened to walk through a courtyard that had a few trees and some wildflowers, and knew that was the right spot.

“The site was an open space that was enclosed by exterior walls of the school,” he explains. “There was very little demolition needed, and there were two catch basins that drained storm water.” 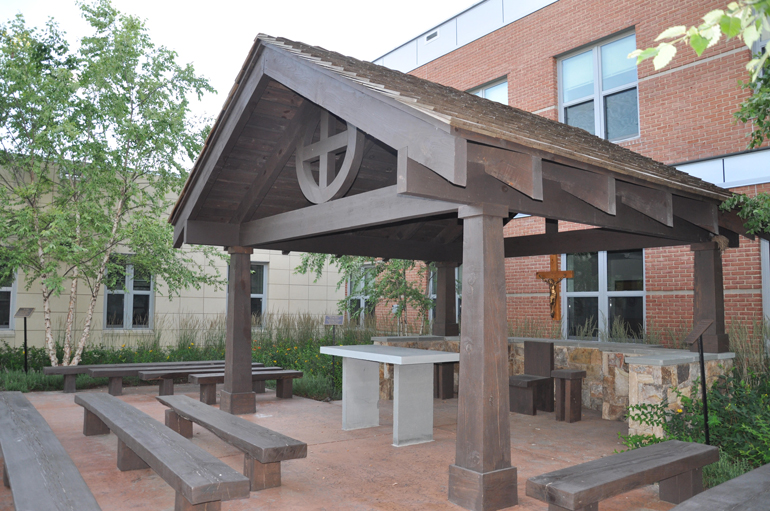 A registered landscape architect, McHale then gifted the school his design for the garden and materials to the project. Other families of students and the school itself donated cash to cover the rest of the approximately $100,000 job.

McHale explains that the approximately 60-foot by 60-foot space serves three purposes. Besides being a rosary garden it also provides an outdoor chapel and serves as a bereavement memorial.

“It’s not too small, but it’s not an overwhelming space,” he says. “Windows of the administration offices and classrooms surround the courtyard, so the space can be viewed by many. It’s also large enough to accommodate 60-70 people but small enough to feel private and intimate.” 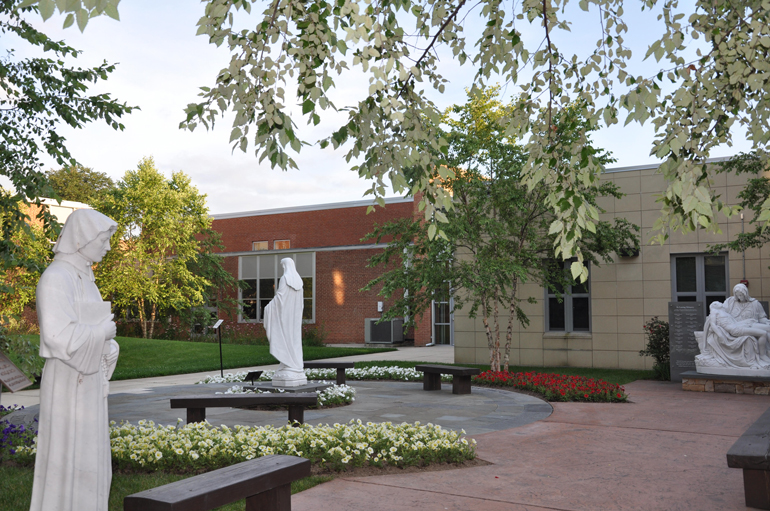 Each of the three purposes has its own area. The rosary garden, which is nearest the entrance, features a statue of the Blessed Mother centered on a rosary patio made of Pennsylvania bluestone. The perimeter is also made of bluestone, with each piece representing a prayer in the rosary, with the Mysteries of the rosary engraved in it.

The colors of the flowers surrounding the patio also coincide with the mystery next to it. The perimeter begins with a cross made of Tuscany travertine, which is the material used for most of the Vatican. 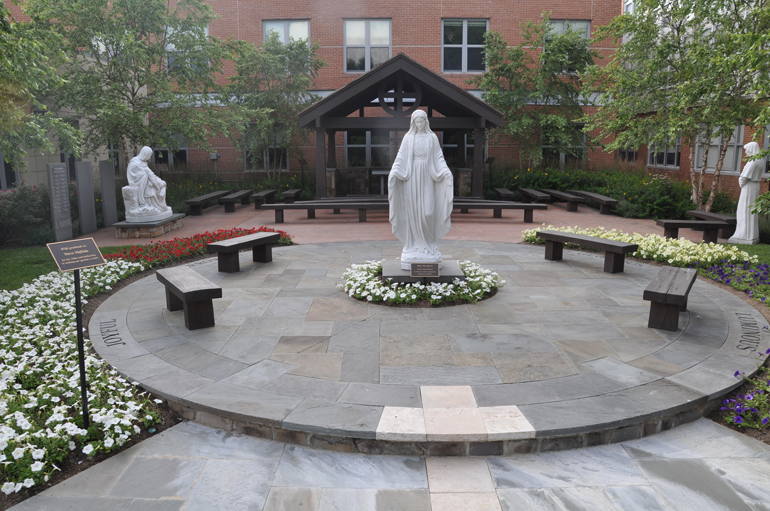 Beyond that is the chapel patio, which is built from colored concreted with a weathered appearance designed to mimic a clay soil base for what’s a rustic setting. The benches for the chapel are made from rough-cut heavy white oak timbers and stained dark brown.

The benches for the chapel were among several components of the project that presented McHale with the biggest challenge — access to his site.

“Some of the bench lumber was 20 feet long, and the statues weighed more than 2,000 pounds,” he says. “We also used 10 yards of concrete and 500 square feet of flagstone, and it had to be brought through two sets of seven-foot wide doors and the school hallway. Everything was carried through the doorway.” 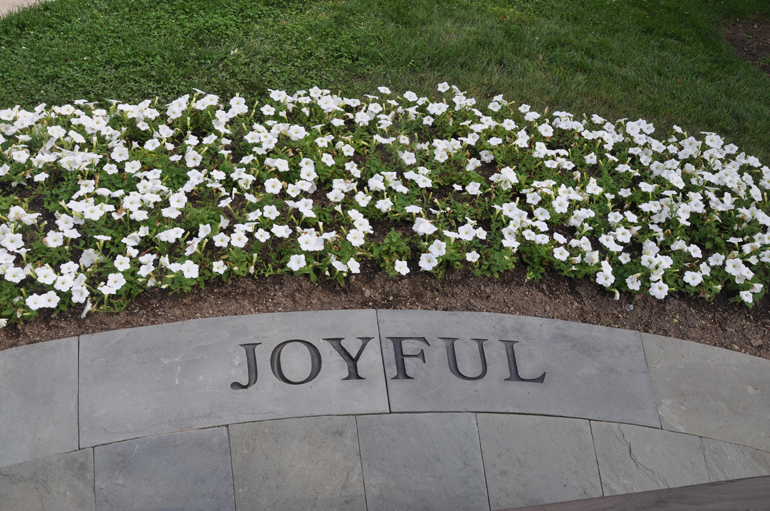 Continuing the rustic appearance and complementing the rosary patio, the altar is honed premium bluestone. The chapel is approximately 12-foot by 12-foot and is surrounded by a three-foot stone wall. A statue of Mother Elizabeth Seton, the Maryland educator who was the first American saint to be canonized, watches over the congregation.

To the left of the chapel is the bereavement area. It includes a statue of the Pieta with three slabs of bluestone behind it that list the names of students and faculty who died while they were associated with the school. McHale says this area has become a popular spot for families and friends of the deceased to pray and reflect.

McHale says the statuary provided the biggest learning experience of the project.

“We learned that there are many different types and cost ranges of marble that are used for sculpture,” he says. “In our case, we determined that white marble from China was the best choice for quality and price on this particular project.” 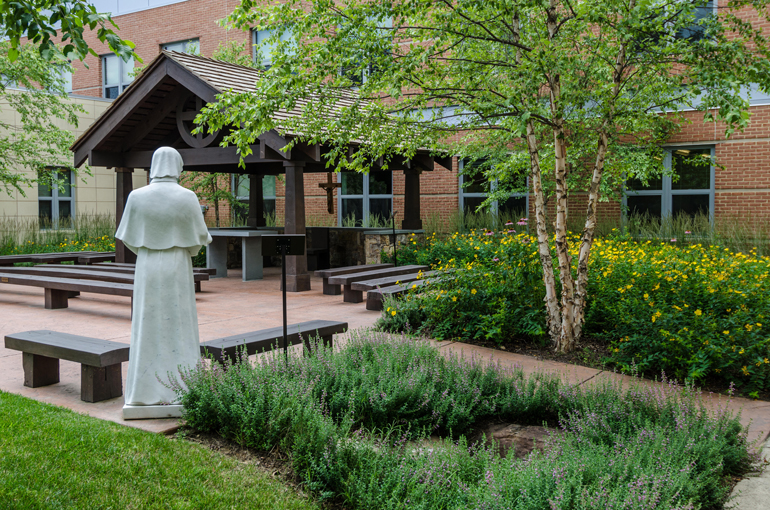 Three birch trees were transplanted to appropriate locations within the rosary garden, and besides the flowers associated with each Mystery, McHale says the area was finished off with low-maintenance plantings to provide color throughout the seasons.

After getting the appropriate approvals, work on the rosary garden begin in early June of 2014 and was completed two months later, or well before the Sept. 1 deadline that had been set for the job. The Archbishop of Baltimore, William E. Lori, blessed and dedicated the garden with a mass.

McHale says he smiles knowing that the students love the rosary garden and it’s on the top of every teacher’s list to use for a class when the weather allows.

“It’s very humbling to see how well the space is used and the reverence it commands,” he concludes.

Next post Why You Should Do Everything You Want