Story Of A Landscape: Retrofitting A Senior Living Facility

Wayne, NJ-based Monello Landscape Industries LLC does everything from private homes to large commercial projects, but the company has become a virtuoso for one very specific type of client — senior living facilities. Its jobs invariably win recognition from Hardscape North America, and 2018 was no exception as its CareOne Courtyard here took honorable mention in the category of Combination of hardscape products – commercial. 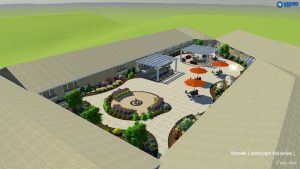 Often these jobs are retrofits, and many times are further complicated by being renovations of enclosed courtyards, meaning access for demolition and construction is via crane. In both cases, this project for the CareOne at King James facility in Atlantic Highlands wasn’t the exception.

However, company owner Joe Monello and his crew are so experienced that they’re able to fit the desired amenities into a variety of changing spaces while uniformly guaranteeing work at the site will be completed in 60 days.

Even so, the Atlantic Highlands project presented some challenges for the company. A major one was correcting some drainage problems that meant tearing out some interior concrete.

“This building looked like it may have been a combination of several things: a hotel, and possibly a church,” he says. “The architecture was very strange. Years ago, nursing homes did basically the bare minimum of landscaping. There was a lot of green lawn area and a perimeter walkway around the space and that was it for the courtyards.”

In doing the redesign, Monello says he recognized today’s residents are more active. Standard amenities include a full ADA- (Americans with Disabilities Act) compliant outdoor kitchen and bar that also incorporates a serving table; several ADA-compliant bistro tables with umbrellas; an outdoor television and audio system, and; in this courtyard, two urn-like water features to provide both visual and auditory stimulation.

“We also put in two pergola structures for shade with Sunbrella® covers,” says Monello. “The outdoor lighting is done for both ambiance and safety and we do seat walls that serve as accent walls for additional seating for family members or residents.”

In a further effort to keep residents busy, Monello also designed and installed a sensory garden which produces herbs used in the facility’s kitchen.

“It’s a raised area – ADA-compliant – where they can do their own gardening,” Monello explains. “The herbs are grown by the residents and cut and clipped by the culinary department.”

Much of the horizontal surface of the courtyard is done in pavers, and Monello also incorporates a CareOne LLC logo into the paver work.

“We put in a paver surface that’s completely smooth where there’s any kind of wheelchair activity,” he says. “We make sure to use only smooth pavers, and then we put accent pavers with more texture toward the perimeter so if someone has vision problems and they hit the bumps they know they’re going toward the edges of the patio.”

Among the suppliers for the project were Techo-Bloc Inc., and EP Henry Corp. Techo-Bloc provided the pavers for the horizontal surfaces and the blocks for the accent/seating walls. Monello says the cultured stone veneer for the bar and kitchen areas is offered by EP Henry. The countertops and bistro tables are granite.

One item Monello tries to stay away from in his designs is shade trees, although the softscape for this project is fully irrigated.

“Trees can be problematic for the building with the roots lifting the pavers and the leaves getting into the gutters,” he observes. “There’s also the general mess trees can make. We only install small, ornamental trees and very few of them. We get our shade from the umbrellas with the bistro tables and the pergolas with their shade covers.”

Monello was particularly mindful about drainage with this project as a situation arose of which he was initially unaware that led the company to do a little work indoors.

“Part of the building had another small courtyard where the drainage was clogged and flooding was going on,” he says. “The courtyard we were working on had a working system that we were able to tie into, but we had to break the floor of the building to attach a new drain system from that old courtyard.”

Additionally, “We always pitch everything in toward the patio or small catch basins,” Monello says. “In this case we tied everything away from the building toward the middle of the patio, and it worked out well.”

As challenging as that was, Monello says the job’s greatest trial was managing the crane – even though it’s not uncommon for the company to need one on its courtyard jobs.

“We like to think we have it down to a science,” Monello adds.

Manpower over the course of the project, which involved just under 10,000 square feet of courtyard space, varied from a high of nine men to periods where only a three-man crew would be onsite. He explains the number went higher as the deadline approached.

Monello says his favorite feature for the courtyard portion of the project is the way the kitchen turned out.

“The layout of the kitchen is a nice design for us,” he says. “I also like looking at the patio coming in from the main door leading into the courtyard. You’re looking through the middle of the pergola and your eye is drawn to one of the water features.”

The company also upgraded the landscaping around the exterior of the building with both hardscape and softscape, and he’s particularly pleased with a big water feature Monello Landscape added to the front of the building.

“We’re going to start working it into our design layouts when we can fit it into the budget,” he concludes. “[Hardscape North America] doesn’t have awards for water features, but if they did, this one would be a winner.”

K. Schipper is a writer and editor specializing in B2B publishing. She is a partner in Word Mechanics, based in Palm Springs, CA.