Even though this backyard project was confined by space, it won big awards from the Illinois Landscape Contractors Association.

When Topiarius won both the 2016 Excellence in Landscape gold award and the Professionals’ Choice award from the Illinois Landscape Contractors Association for a residential project it dubbed Urban Attitude, the recognition was almost larger than the job itself.

And, while president Craig Jenkins-Sutton and his team were able put a lot in a little space, one of the highlights of the job isn’t even visible to the naked eye.

Topiarius is a specialist in re-landscaping small urban spaces, and this project encompasses a 20-foot by 25-foot backyard behind a three-story townhouse. The clients came to the company via a referral.

Jenkins-Sutton says not only was the space small, but it was on the north side of the Chicago home, and included three fully mature Bradford pears and some scraggly yews.

“There was also some undergrowth that was really bad,” he says. “It was always dark and wet.” 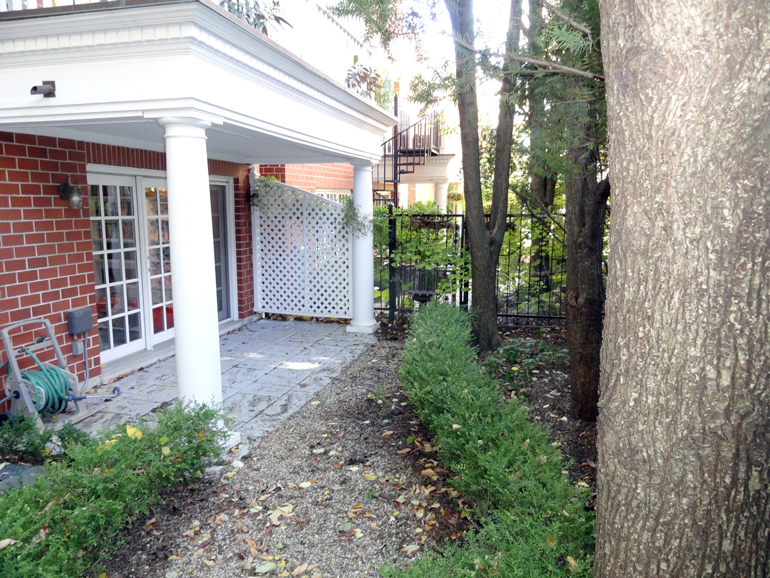 Before the renovation. Photo: Topiarius

Despite that unpromising starting point, Jenkins-Sutton says the clients expected a great deal from their space. The wife was originally from New Zealand, and the couple had lived in London.

“From that time, they had high expectations about getting a really finished garden space,” Jenkins-Sutton says. “She also wanted to have big, bright, fun colors that reminded her of New Zealand. We really had to think creatively in order to get the color she wanted.”

Fortunately, the clients were on board about the need for all the trees to come out. However, the area wasn’t wet simply because of the trees. Drainage proved to be a major issue that Topiarius took considerable pains to address. 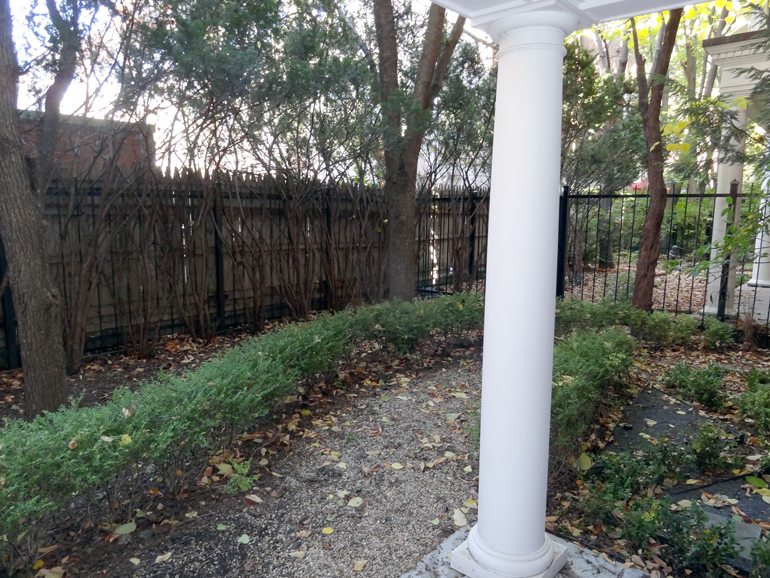 Before the renovation. Photo: Topiarius

Jenkins-Sutton explains that the backyard adjoins another development that happens to be about 18 inches higher than the clients’ yard. At the start of the project the grade was such that the lowest spot in the yard happened to be next to the home on an existing concrete patio.

“We started by taking down the back of the yard at least 12 inches,” he says. “As we got closer to the house the depth of the excavation decreased, but we took out about 10 yards of heavy, clay soil that’s bad for drainage anyway.”

Replacing it, Topiarius installed a short retaining wall to the level of the adjoining property, and then covered the excavated area with three-quarter-inch washed gravel.

“That really created a dry well for the water to sit in,” Jenkins-Sutton says. “It disburses the water through the entire area, allowing for more and better drainage.”

To deal with the concrete pad, designer Emily Cavanagh did something almost counter-intuitive by raising it just a little.

“We installed bluestone over the pad, which is in good shape,” Jenkins-Sutton explains. “As you walk out the bluestone is flush, but we then pitched it down over the course of the 10-foot width of the patio. There’s a significant grade change on the patio so the water all drains into the dry-well area below it.” 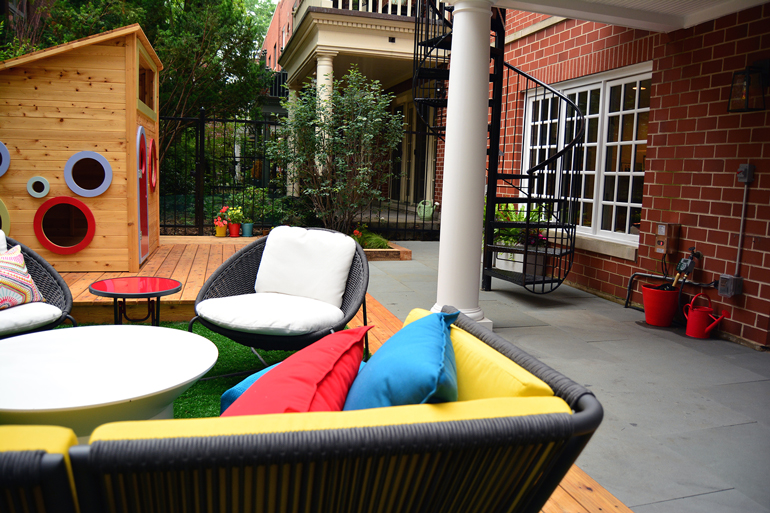 The new bluestone patio was actually extended a bit so that it goes most of the way across the back of the house, leaving just a small planting area.

“On those new areas, we excavated about 12 inches, put in a grade nine gravel base, compacted it in lifts and then installed a sand-bedding layer,” Jenkins-Sutton says. “Over the concrete, we just extended the sand-bedding layer to allow for a little bit of moment.”

The landscapers then tied the patio to a second-level deck through a newly constructed spiral staircase. Jenkins-Sutton says while the company likes to do most of the work on projects in-house, the spiral staircase fabrication and installation was subbed out.

“We had to bring in a metal fabrication company,” he says. “It was fun for the clients’ three girls because it had to be craned over the top of the house. We use cranes a lot in the city because access can be so difficult.” 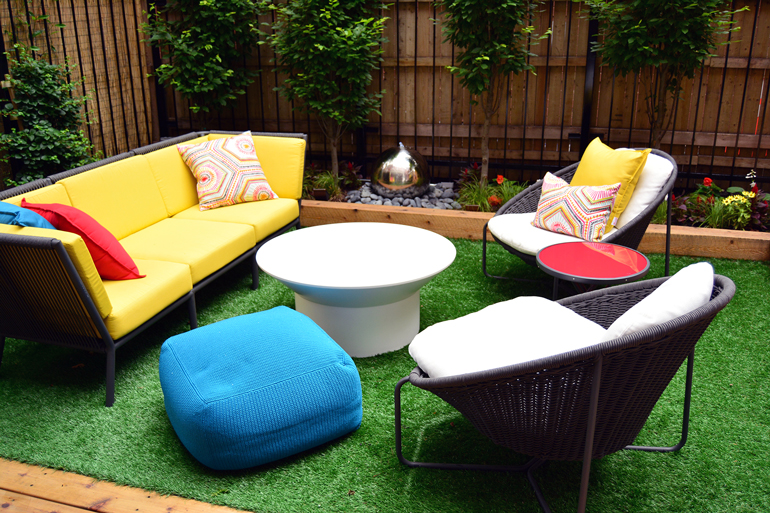 Below the bluestone patio is an area Jenkins-Sutton calls the project’s living room. He says Topiarius worked with the clients’ to choose the furniture, which is in big, bright colors. The furniture is all situated on a patch of artificial turf.

“The client wanted grass, but here in the city, with the amount of shade and the small footprint, as well as the heavy clay soils, it would have been doomed to failure,” he says. “Again, we installed it over the top of our dry well.”

Also on the clients’ wish list was a water feature. The silver ball adds a bit of sparkle while masking urban noises. Jenkins-Sutton says it’s also a pondless installation and the reservoir is below grade and covered in a cloth wire-mesh as part of the precautions the company took to discourage access by rodents.

Finishing off the built environment is an elevated deck that features a playhouse – built from a kit – for the girls. 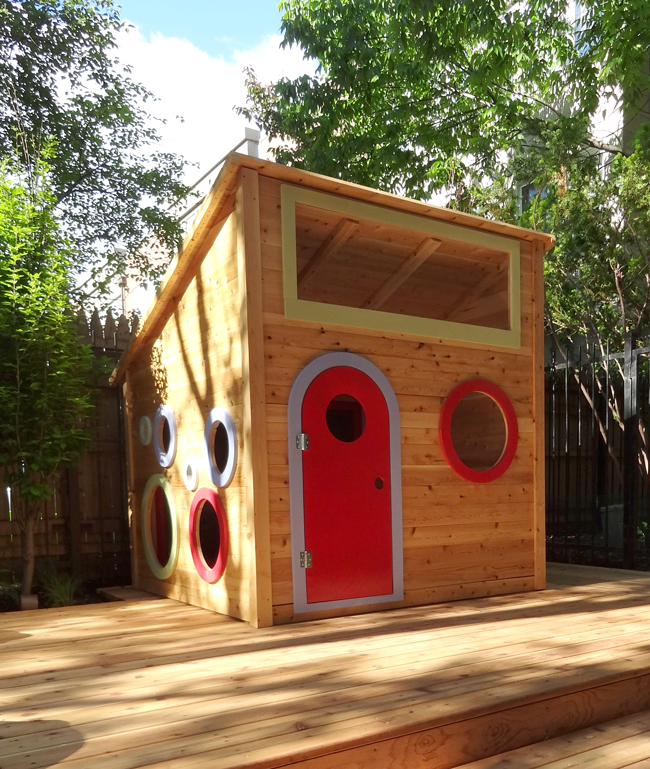 Topiarius was also able to meet the clients’ desire for an herb garden by utilizing a space next to the driveway that mimics the look of the neighbor’s stairs utilizing containers from Crate & Barrel that hang from the wall.

“That was the only spot on the entire property that gets enough sun to grow herbs,” Jenkins-Sutton says. “We did a nice little pattern and then stuck drip irrigation lines behind it so they don’t have to remember to water them.”

Developing the plant palette for the project proved challenging. Because the clients’ desired to shield the yard from the complex behind them, Topiarius planted Frans Fontaine hornbeams. The space also includes some Regent serviceberries.

The serviceberries were selected for their small size and spring blooms. The hornbeams will reach 30 feet at maturity, and a Topiarius arborist is working with them to minimize their width. 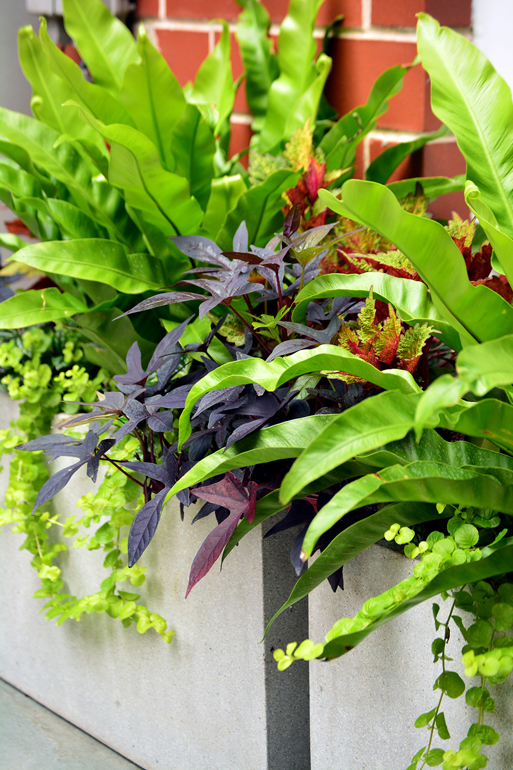 “That’s a bit more labor-intensive in terms of ongoing care of the trees, but if you want that screening there aren’t a lot of plants we could use,” Jenkins-Sutton says. “Plus, our maintenance division is also going out every year to do annual seasonal rotations for the client.”

Perhaps not surprisingly, what Jenkins-Sutton describes as the biggest challenge of the job is also part of what makes him so proud of this project. Or, as he puts it, “It’s getting 10 yards of soil out in wheelbarrows.”

“This entire project happened through a sidewalk alleyway between the clients’ house and their neighbor’s house,” he says. “The gates were 32 inches wide, and other than the crane that lifted the stairs, the entire project went through there.” 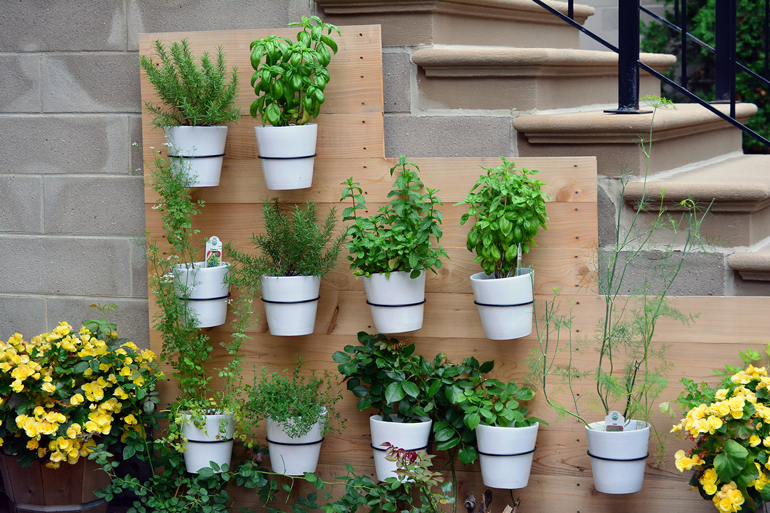 Beyond that 10 yards of soil, Jenkins-Sutton says a particular challenge was sourcing container-grown hornbeams because ball-and-burlap ones would have required a tree cart, which was too wide to fit through the gate.

Along with his team’s ability to deal with that tight passageway, the president of Topiarius says what makes him most proud of the project is the way his people handled the clients.

“She was a tough customer,” he says. “She had very high expectations, and she really wanted what she wanted. Our team, from the designer through the ops manager and the on-site guys just took care of her. When you’re spending just under $60,000 on an outdoor space that’s 20-foot by 25-foot, nothing can be out of place, and now we’ve had a good transition from construction to maintenance.” 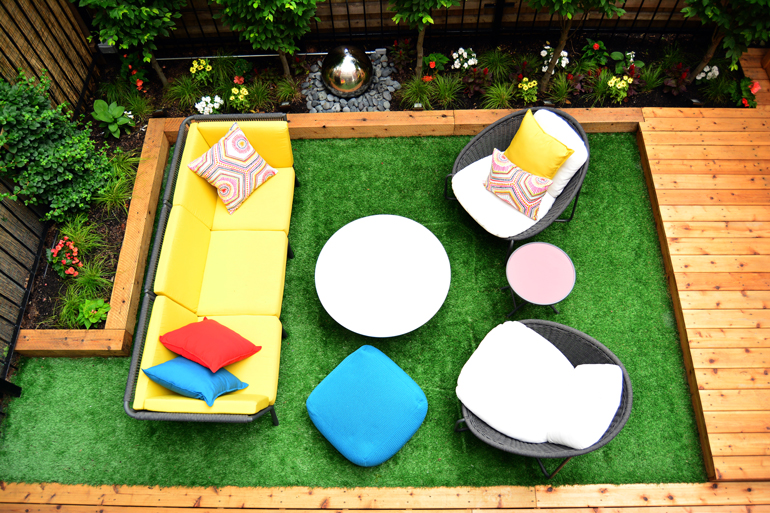 And, he says, in turn, that’s made Topiarius a bit smarter, too, in the way it handles certain drainage issues.

“She was so concerned about drainage that we had to rethink how we installed both the artificial turf and the at-grade deck,” Jenkins-Sutton concludes. “We found we could make drainage underneath them a reality, and now as we move forward and have similar situations we can say, ‘Hey, this is what we can do.’”