A softball team connection turns into a home-run project for this Virginia company.

Some jobs end up expanding a company’s horizons more than others. A residential project for a friend not only expanded the comfort zone of what Professional Grounds Inc., of Lorton, Virginia, can do, but proved to be a big personal challenge for company President Timothy Trimmer.

The client, who plays on a recreational softball team with Trimmer, split the role of general contractor for the almost $1 million project, relying on Trimmer’s presence on the job site to oversee components of the job such as construction of a pavilion.

As Trimmer says, “It took a lot of my time.”

He explains that members of the team had gone to the client’s house for a get-together after a game. While there, Trimmer noticed his friend had a design package for his landscape. 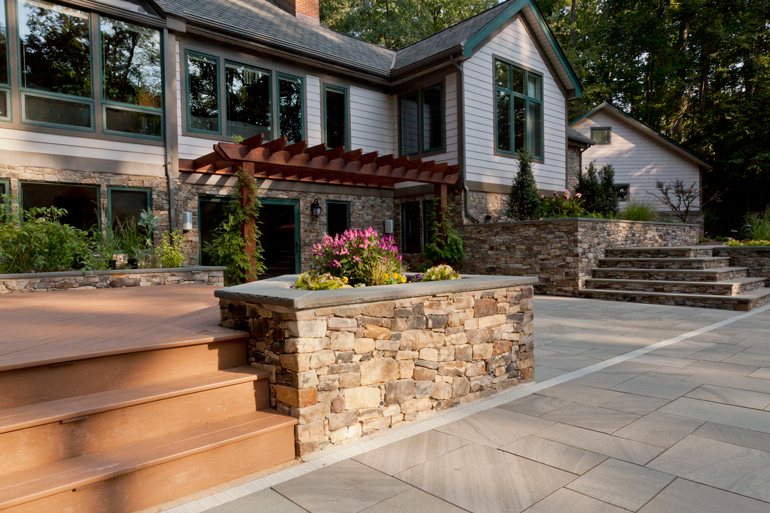 “I said, ‘You’re looking to have your lawn renovated; that’s exactly what we do,’” Trimmer relays. “He said, ‘It’s pretty complicated and there are a lot of parts to it,’ and Trimmer responded, ‘It seems to be well within our scope.’”

Trimmer admits he may have been pushing the envelope when he told the client about Professional Grounds’ capabilities. Much of the work the firm does is in the historic Virginia communities immediately surrounding Washington.

“We do a lot of landscaping, but typically our niche is smaller spaces as we are close to the district,” he says. “However, I knew this was something we were capable of. We usually do jobs in the $50,000-$80,000 price range, but I saw the advantages of marketing a job like this, so we priced it competitively.”

Trimmer adds that the client did plenty of research and checked Professional Grounds’ references before signing a contract. One of the company’s designers then went in and made some changes to the design Trimmer had initially seen, including to some of the materials, as well as the overall flow of the project. 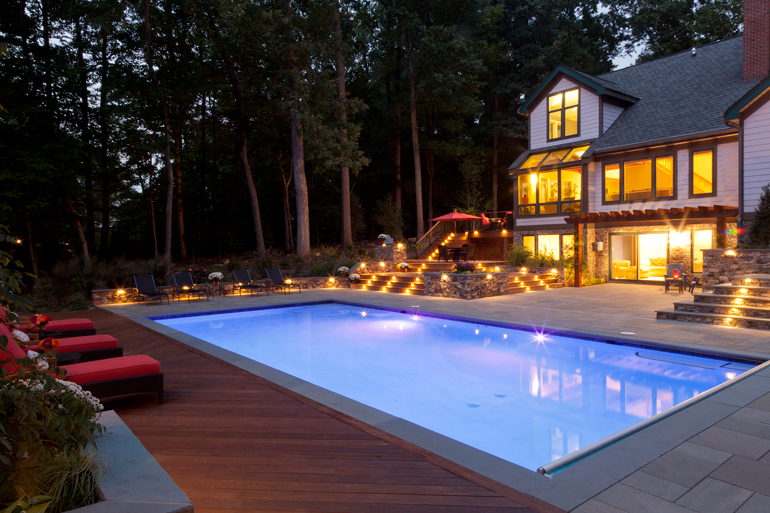 Unfortunately, the designer left the company abruptly for family reasons only two weeks after the client signed the initial contract.

“I had been very reliant on our designer for the changes and bidding the job,” Trimmer says. “I was the only other person who really knew about this job – I was landscape production manager at the time – so I took it over and managed it for more than a year.”

To call the project modest would be an understatement. Trimmer says going into the job, the lot had a pool with grass going right up to it, and a huge hillside that went down to it. The finished project includes a pavilion with a large outdoor kitchen, pool decking, retaining walls, and a separate grill station near the house, as well as a Zen garden with a water feature.

Additionally, the company installed thin-stone veneer on portions of the client’s home. If nothing else, he says the addition of the pavilion and the retaining walls did a great deal to make the backyard both more usable and more spacious. 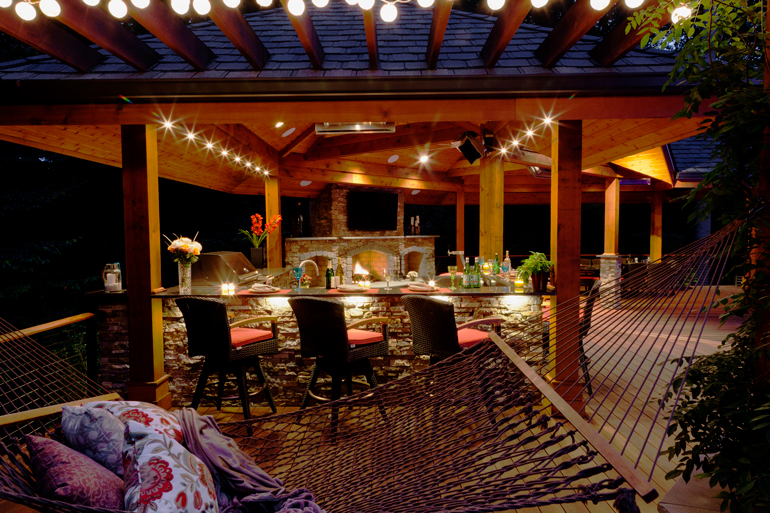 These additions also provided the largest challenges, for different reasons.

Once the client had decided to act as his own general contractor, Trimmer offered to help him out by finding subs to do the services Professional Grounds doesn’t normally handle – such as the carpentry work on the pavilion.

“I told him if he wanted he could manage it himself, but because we worked so well together, I ended up managing much of that for him,” he says. “In a lot of ways, I really was the general contractor. The client would call and say, ‘We’re having a meeting and I would like you to be there.’ It was nothing related to me, and I could have said that it’s not my responsibility, but I wanted to keep him happy.”

Because the client was very hands-on, Trimmer says he would spend up to two hours each evening on the phone talking over the project with the client. And, while he acknowledges his wife probably got frustrated with the arrangement, he feels it’s the key to the success of this job.

“If you do a $5,000-$10,000 job and are there a week, it’s easy to make someone happy,” he observes. “When you’re onsite over parts of two years doing the job and they’re still happy, that’s something to be really proud of.”

The use of the thin-veneer stone is also a little outside the realm of ordinary landscaping, not because of its use on the retaining walls, but because Professional Grounds ended up making it an integral part of the client’s home, as well.

Trimmer says quite a bit of grading went into the backyard to make it more usable, and necessitated retaining walls: concrete block faced in Stony Point Mastercut veneer from Charles Luck Stone. 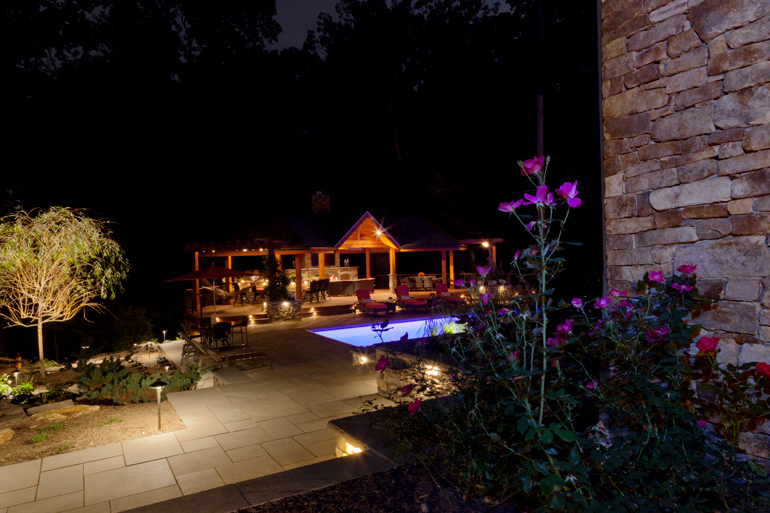 “The client liked it so much he said he wanted it on much of his house and the detached garage,” he says. “I’m not a designer, and it was really a design aspect, but I said let’s do it this way and the client said, ‘Great; put together a quote for me to review.’”

Fortunately, Professional Grounds has three masonry crews. Still, Trimmer says the local building codes really weren’t up on the latest regarding thin-stone veneer on homes, and he had to do quite a bit of research on vapor barriers and rain screens to make sure it was done correctly.

He explains that because of the way homes were better insulated after about 2003, the old way of installing stone on houses was causing problems because there was not enough air movement on the wood behind the stone.

“I’m always concerned about warranty work and things not performing the way they should,” he says. “I can’t imagine having to tear all that out and put up new wood, and then new stone on the house.” 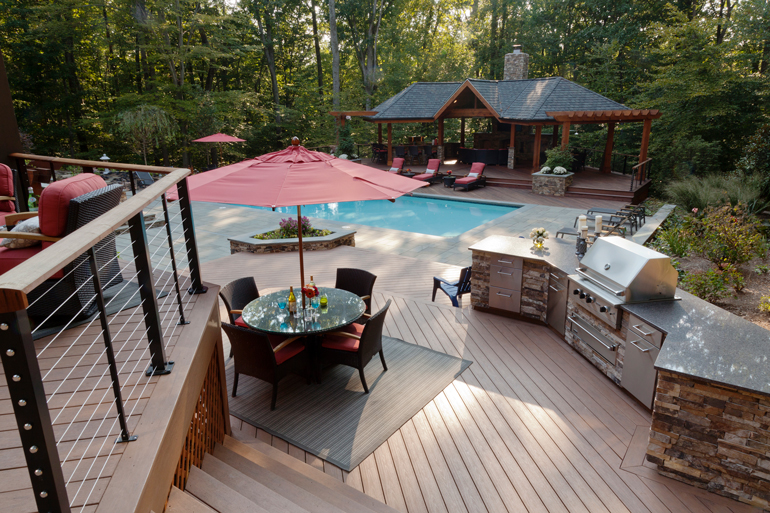 As with eating an elephant, Trimmer says Professional Grounds got through the job by doing it a phase at a time.

“The main portion of the landscape work was phase one,” he says. “Phase two was seven different proposals for plants around the yard, a Zen garden with a 70-foot stream and additional lights. The client wanted very mature plants – magnolias that were 20 feet tall – and he was willing to pay for them.”

The company then did a subsequent project for the client. Just this past summer, Professional Grounds did a big stone monument in the front with the home’s address.

“We do a lot of water features, and that was done about a year-and-a-half after everything else was done,” says Trimmer of the garden. “It includes a pond that’s 7 feet deep, and it’s surrounded by the Japanese Zen garden with Japanese lanterns, a Japanese bridge and Japanese plants.” 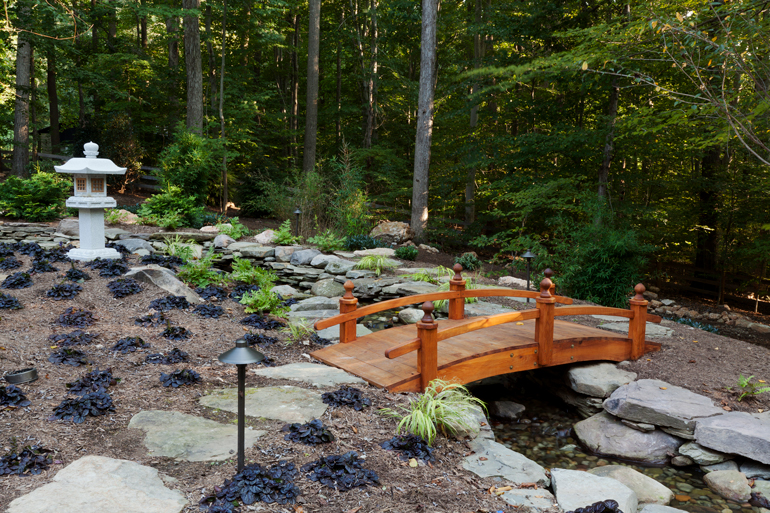 In all the company has more than 250 low-voltage LED lights in the landscape. Despite the large scope of the project, Trimmer says his favorite part of the job is the Japanese lantern in the Zen garden.

“I don’t know why,” he says. “There’s nothing extraordinary about it, but the way it’s lit up and the way the light glows from within really stands out for me.”

As for what he’s most proud about with this job, there’s no question: it’s the satisfaction of the customer.

“If you go to our website where we’re reviewed, we have five stars everywhere,” Trimmer says. “We go to any expense to make sure our customers are happy. This client has pretty much fired every subcontractor there, and he says we’re the best contractor he’s ever worked with, which says a lot.”

And, he says, the fact that the project won a 2015 Award of Distinction in Craftsmanship from the Landscape Contractors Association MD-DC-VA, means a lot, as well.

“Because we’re not in the arena of huge jobs, it shows the community we can do this work, too,” he says.

Now that it’s done, Trimmer says he’s also learned that when you bid a big job, such as this one, even a smaller company can do it if you look at it as a combination of little jobs, “because you can do ten jobs that add up to one large job.” 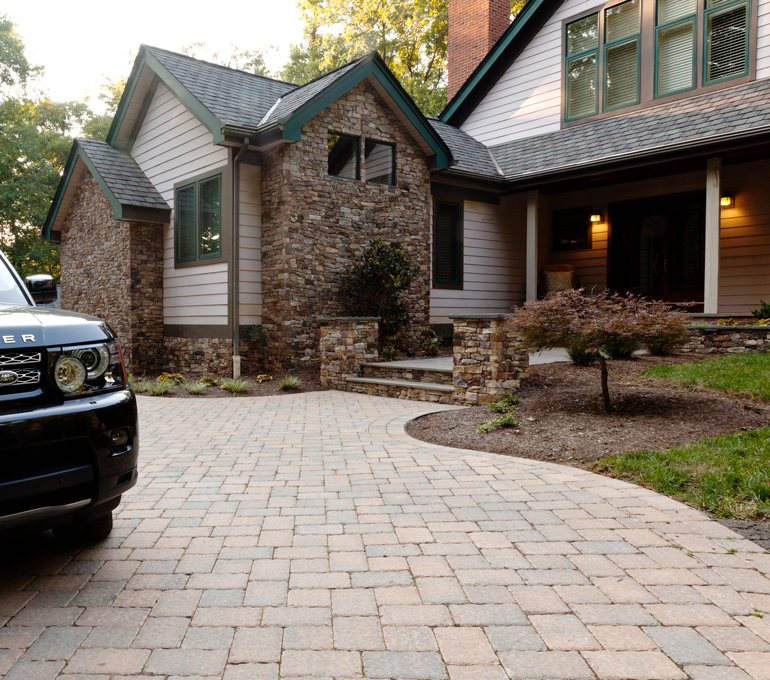 The other thing he learned is that you don’t want to take away from your other contracts and your other clients.

“Typically we had anywhere from three to seven guys on the site, depending on what they were doing,” Trimmer says. “You can’t put too much on it because you don’t want to take away from your other jobs. We did think about that, and we went on a recruiting rampage before we started this to make sure we had enough people to do the other work, as well.”

Ultimately, Trimmer confesses this project was built on some razor-thin margins and he says, “the owner won on this one.” Still, it has gotten Professional Grounds into doing larger jobs to the point where the company has added two landscape architects just to help manage them.

“At the end of the day, when we look back on it years from now, would we do it again?” he asks rhetorically. “I think so. Yes.”

Previous post How to Budget for More Expensive Construction Equipment