When Daniel Wilson was called in by a local contractor to try to address a water infiltration problem with a home being remodeled, he went with a very specific issue to solve.

However, the owner of Wilson Environmental Contracting, Inc., left with much more, including a satisfied homeowner, a new landscape and the 2015 Bob Baier Memorial Award for best entry containing sustainable installation elements from the California Landscape Contractors Association.

“The job started with a referral request from the general contractor who was working with the homeowner,” Wilson says. “They had remodeled the house and they were having drainage issues in the home’s subsurface. I was initially called in to help determine the source of the water intrusion and remedy it.” 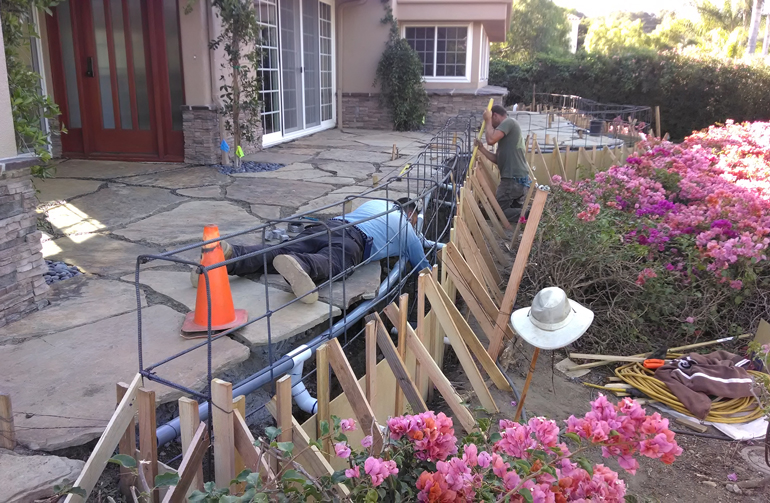 The ferrocement wall was challenging because of the existing poorly constructed block wall and the need for drainage. PHOTO: Wilson Environmental Contracting, Inc.

Wilson’s diagnosis: excessive and overly frequent landscape irrigation, coupled with improper slope against the house. Resolving it evolved into what he calls, “a wonderful relationship with the owner and general contractor,” as well as redoing the hardscape, a new irrigation system and new plantings.

“Basically, we started by reducing the volume of water and the frequency of water and the location of where water was applied to the landscape,” he says. “It also reduced the client’s water bills and increased the aesthetic beauty of the property.” 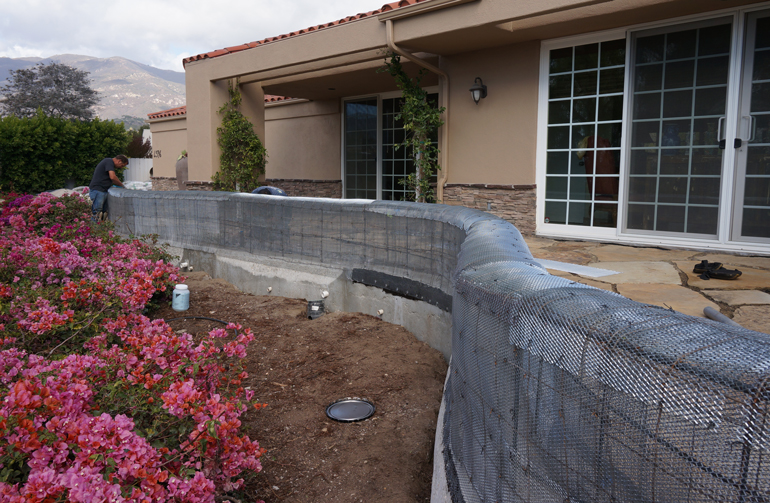 Ultimately, Wilson Environmental redid both the front and back yards of the Santa Barbara, California, property, with the two projects separated by half a year.

The front yard came in for the bulk of the work, starting with redirecting surface and gutter drainage.

“We daylighted subsurface drains downslope and created a dry creek bed flowing down along the root zone of a mature pepper tree, and then we removed the concrete sidewalks,” Wilson says. “We then increased permeability by replacing the walkway and area around the front of the house with dry laid flagstones with large joints to allow stormwater infiltration.” 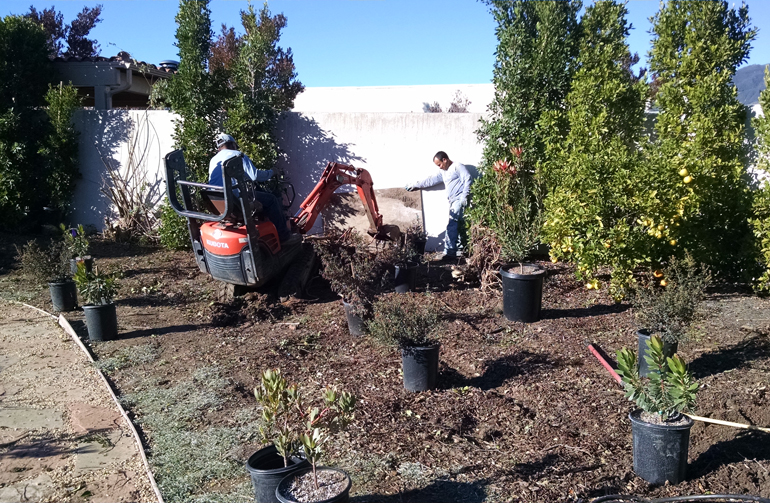 Along with an updated plant selection, the contractor amended and mulched the soil. PHOTO: Wilson Environmental Contracting, Inc.

The company also installed a 100-foot curving ferrocement wall outside an existing dry-laid block wall to retain the slope near the foundation, retrofitted sprinklers to drip irrigation and installed an on-site weather station that communicated with a clock to further reduce irrigation.

Wilson says the ferrocement wall was quite complicated because of the existing poorly constructed block wall and the need for drainage.

“We had to get drainage water away from the house, but first had to figure out how to drain the water through an impervious ferrocement wall, as well as take water from the subsurface behind the wall,” he says. “It led to some pretty unique plumbing inside the rebar structure of the wall. There were definitely some technical challenges involved.” 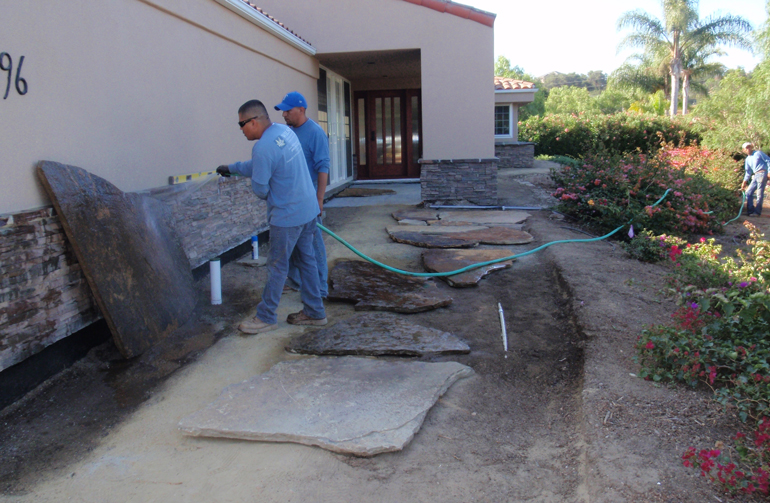 To reduce the need for irrigation, Wilson also introduced a new plant palette to the property, replacing lawn with succulents and California- and Mediterranean-originated plants appropriate for the region.

They include succulents such as dudleyas, echeverias, agaves, aloes, senecios and sedums, as well as ground cover — mainly myoporum parvifolium — and grevilleas.

“The client loves color, so there were also some bougainvilleas and some dwarf strawberry trees planted for some neighbor driveway screening,” says Wilson. “We kept it pretty simple, but with some bold and bright colors and texture.” 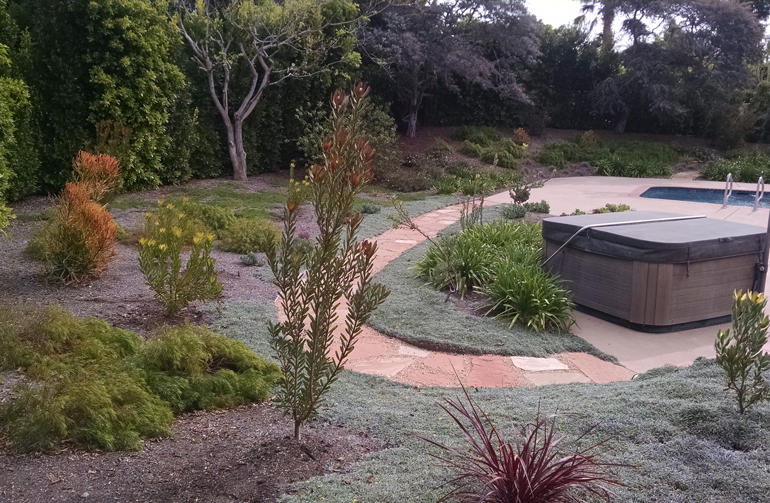 To complete that part of the project, the company also installed low-voltage LED landscape lighting for safety and beauty.

A few months after completing the front yard, Wilson Environmental returned to work its magic on the backyard. The scope of work there was less because the property already had an existing flagstone patio and gravel pathways there, and no work was done to the pool and spa area.

“Again, we removed a bunch of plants that were high-water use — mainly roses and jasmine and agapanthus — and replaced them with drought-tolerant ones,” he says. “We also completely overhauled and retrofitted the sprinkler system and changed everything over to inline and point-source drip irrigation, as well as amended and mulched the soil.” 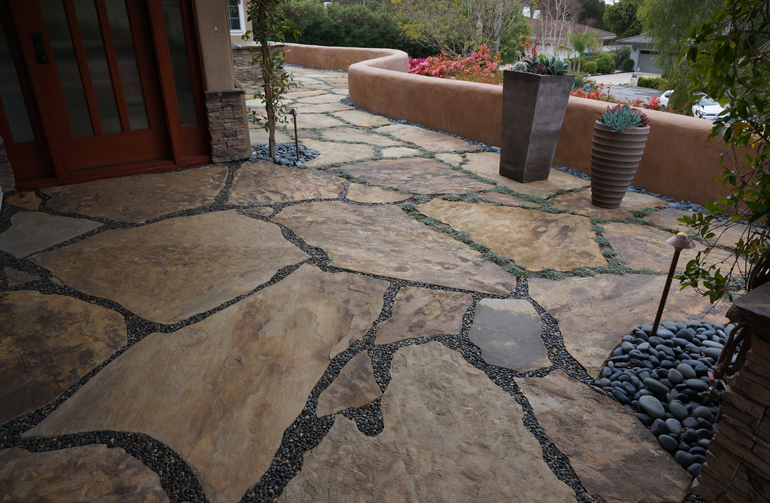 For the backyard, the dyamondia groundcover irrigation is all subsurface quarter-inch tubing with inline drip emitters with the remainder regular half-inch point source and inline drip. The plant palette for that area features acacia cognata (Cousin Itt), leucadendrons and cotoneaster. Completing the new look are big pots planted with succulents.

“Again, we did more of the LED landscape lighting, which includes downlights in the pots and up- and downlights in the trees, as well as the path lights,” says Wilson. “All the lights on the property are zonable and dimmable for maximum finesse and fine control for varying seasons and moods.” 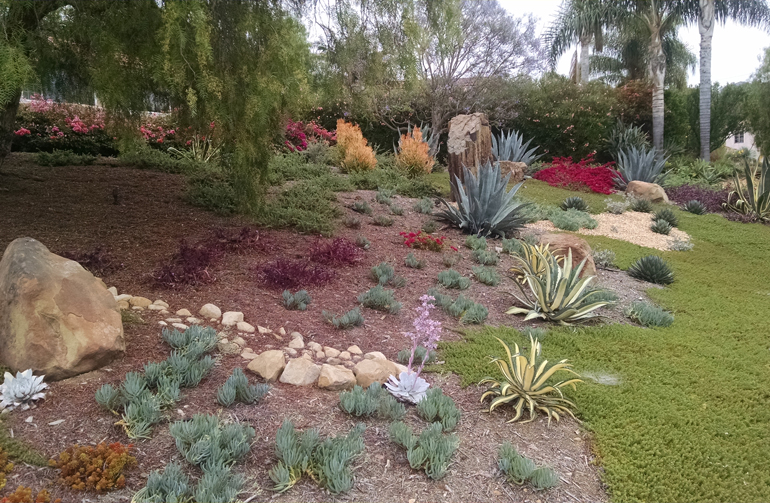 The lawn was replaced with succulents and plants appropriate for the region. PHOTO: Wilson Environmental Contracting, Inc.

The approximately $80,000 job unfolded over a total of two to three months (the backyard took about two weeks, Wilson says) and involved anywhere from three to five crew members at any given time.

“It was sort of on-and-off,” he says. “We were balancing existing work with this project and the client’s developing interests.” 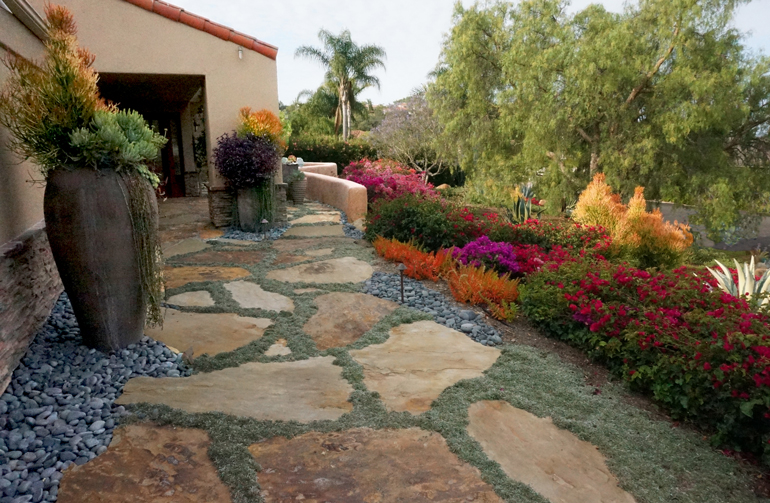 Other than the experiences created by the ferrocement wall, Wilson says the most challenging part of the project was simply the way it unfolded.

“We didn’t have a clear plan in the beginning,” he says. “The client’s desires evolved rapidly over time; she liked what she saw and added more. The challenge was that in some cases it was technically complicated to get to a properly finished product without having the intermediate steps to get there.”

On the other hand, he’s thrilled with the results.

“The amount of energy, maintenance, water and nutrient inputs were significantly reduced, and the aesthetic beauty of the property was significantly increased,” Wilson says. “Plus, it made the client very happy, and I love that; that’s why I do what I do.”