Story Of A Landscape: Project Takes On Runoff And Wins

A good landscape is both practical and beautiful, and the design/build Falling Waters Landscape, Inc., did for a residence on Leora Lane in the Encinitas beach community of Leucadia offers both — in spades.

The project’s marriage of redwood, concrete and steel provides the good looks and is probably responsible for the fact that it was honored with the 2016 Sweepstakes Award from the California Landscape Contractors Association San Diego chapter.

However, it’s practicality is no doubt the reason behind its selection for the WaterSmart Landscape Construction (large) award sponsored by the San Diego County Water Authority. Designer Ryan Prange believes a big part of the technology behind the award is the way he chose to deal with the distinctly unglamorous issue of runoff. 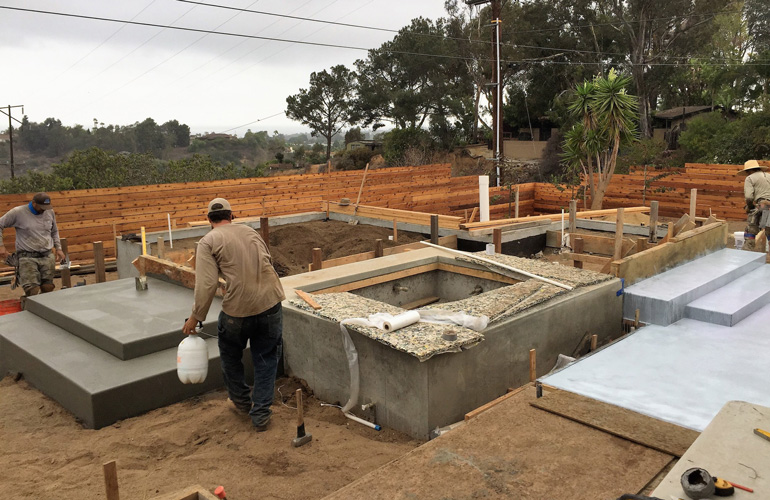 Or, as he says, “A lot of people get hung up on drought-tolerant plants and smart irrigation techniques. That’s important, but the bigger issue is the runoff and what’s happening with pollution.”

Prange’s not even sure how the clients chose Falling Waters. However, when he met with them, they were looking for many of the things most clients want. Heading the list was a place for their young children to play. Other items on their wish list included a place to entertain and eat, an in-ground spa-type tub, and space from which to enjoy an ocean view.

“They were very easy clients in that they didn’t have super high demands, other than a place for their kids to play,” he says. “They had just recently done a remodel to the back of the house, and they wanted a landscape that mimics and complements that.” 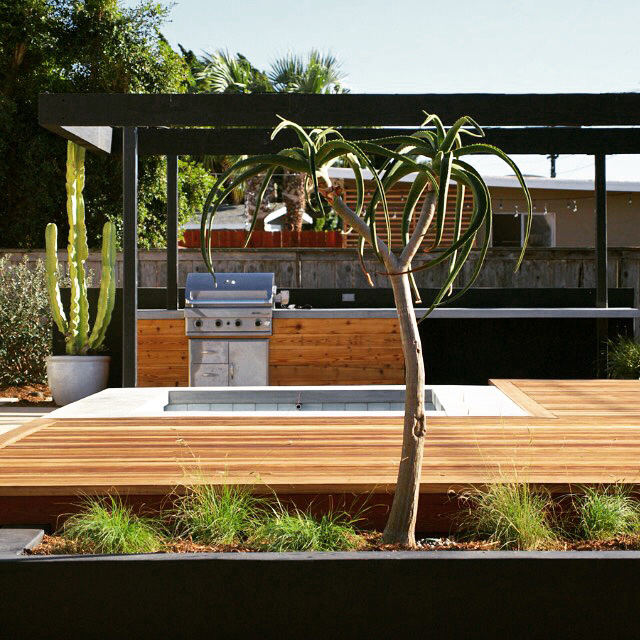 He adds that there was plenty of space in which to work — he estimates about 5,000 square feet. And, the area needed a lot of help.

“It was mostly tumbleweeds,” Prange says. “They had a little bit of concrete off the back sliders, which was required for them to finish their building permit. There wasn’t even a fence.”

It’s probably not surprising that the job took almost five months to complete, with anywhere from five to 10 men onsite most days.

An important early component of the job was what Prange calls, “a decent amount of grading.” He explains that there’s a gentle slope from the house toward the backyard fence and the grading was done mainly to create the raised deck while keeping the elevations in line with the adjacent lots. 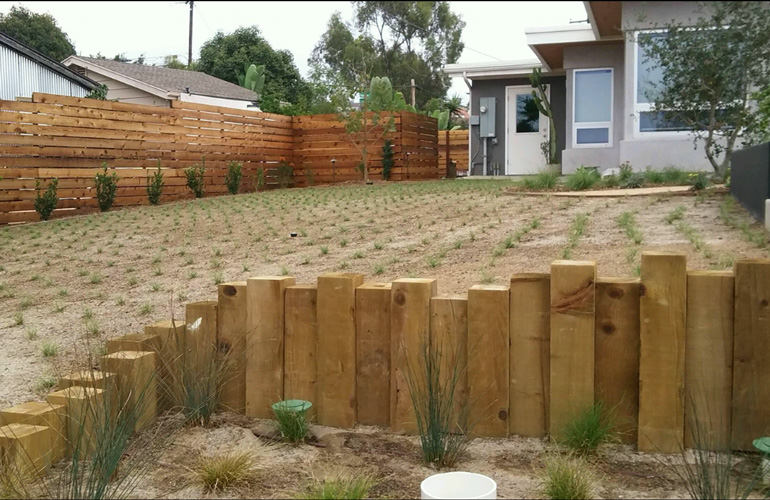 “To engage the upper deck area, we sort of drew a straight line from the deck to the fence line,” Prange explains. “There’s a somewhat deceptive elevation change so that when you’re on the deck you have a nice view of the ocean. If everything had been at ground level, you couldn’t really take advantage of that.”

The area off the back of the house is really in three levels, with the walkout area approximately 300 square feet of redwood decking. Down a couple steps is the outdoor entertainment area, with a galley style barbecue and countertop. The spa is also built up from that level so the top is even with the redwood deck.

Off the dining area and down a couple more steps is another seating area with seating wall and concrete fire pit. 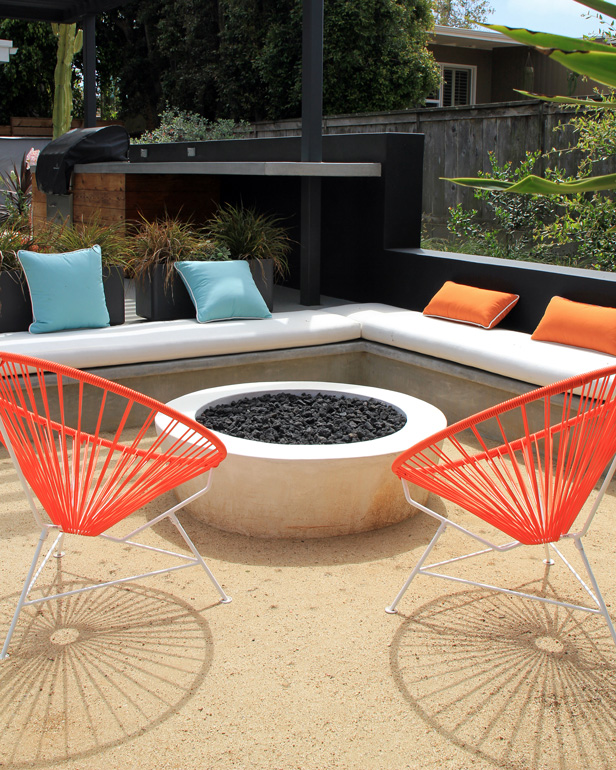 “The kitchen area is really just a grill head with some storage,” Prange says. “They didn’t want a full kitchen with a refrigerator and side burners. What we did give them is an elongated countertop so when they’re entertaining they have plenty of space to put things. It’s almost like a buffet area, and we do that on most of our jobs.”

Covering the kitchen area is an overhead steel structure with four steel posts supporting a wooden frame. Within that frame are steel louvres that are set at an angle to provide the maximum amount of sun protection on the west-facing site. 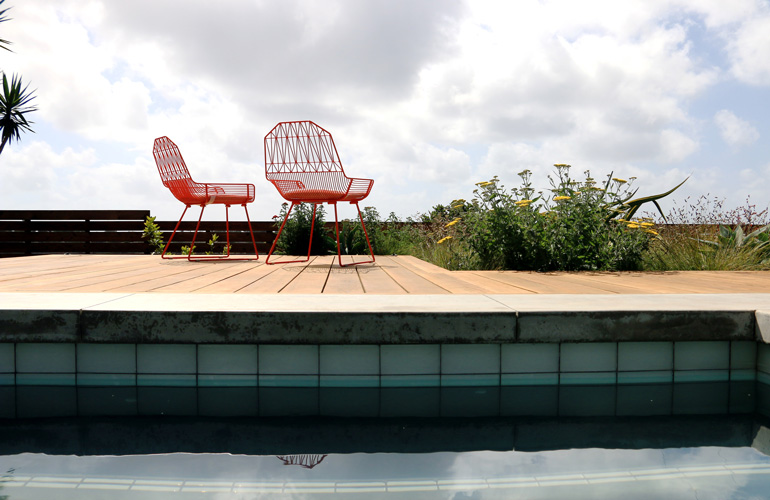 It’s that feature that makes Prange smile when thinking about the project, but he adds it was also the greatest challenge on the job. The problem: initially the design was over-engineered, and he had to make changes to it and alter some of the connections to make it work from a cost standpoint.

“Even though it was a pain, I love the scale and how it fits on the project,” he says. “Everything works very well, it complements the space very well and it accomplishes exactly what we set out to accomplish with it.” 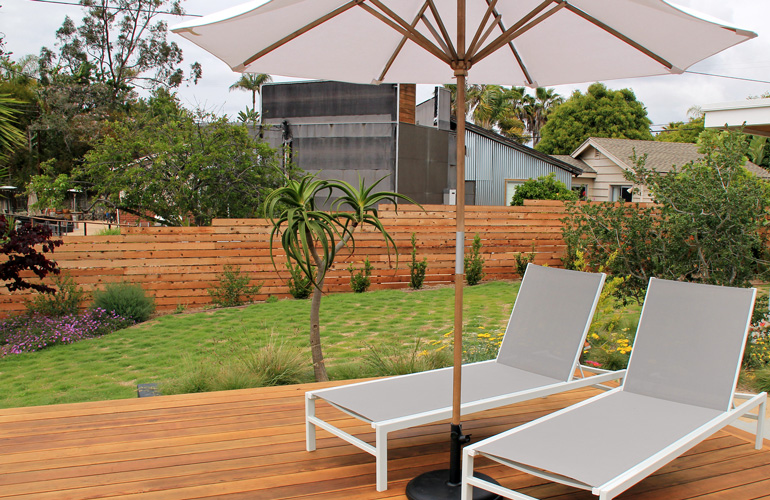 The area is also fully lighted, with many of the lights being flush-mounted to hide them during the day while providing the proper illumination at night.

Off the opposite side of the redwood deck are stairs leading to the children’s play area: approximately 1,500 square feet of UC Verde buffalo grass. Prange says he asked if the clients were willing to go out on a limb and try the grass rather than installing a conventional lawn, and while it wasn’t a tough sell, it did take some convincing. 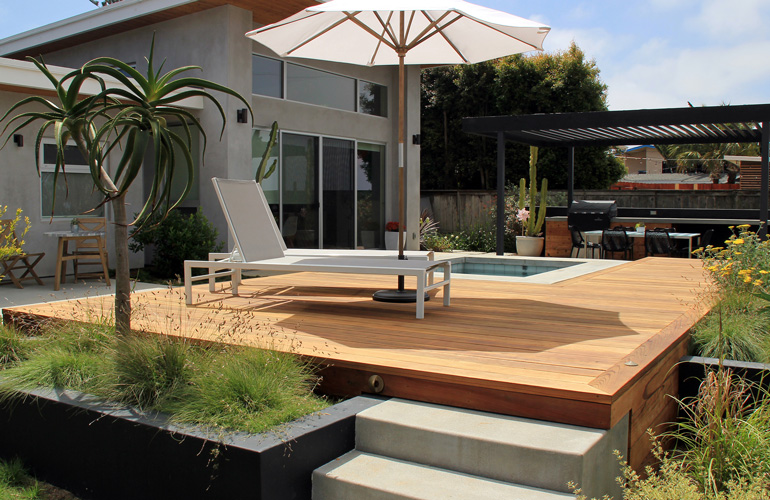 “It was the largest installation of buffalo grass we had done to that time,” Prange says. “It’s planted in 2” plugs and fills in slowly, but it only needs a tenth of the water a regular fescue lawn does, and you mow it as you wish. If you have kids or a dog playing on it, it’s also pretty hardy.”

The remainder of the landscape is planted in a mix of mostly California natives and what Prange calls “naturalized native species” including some grasses and succulents. 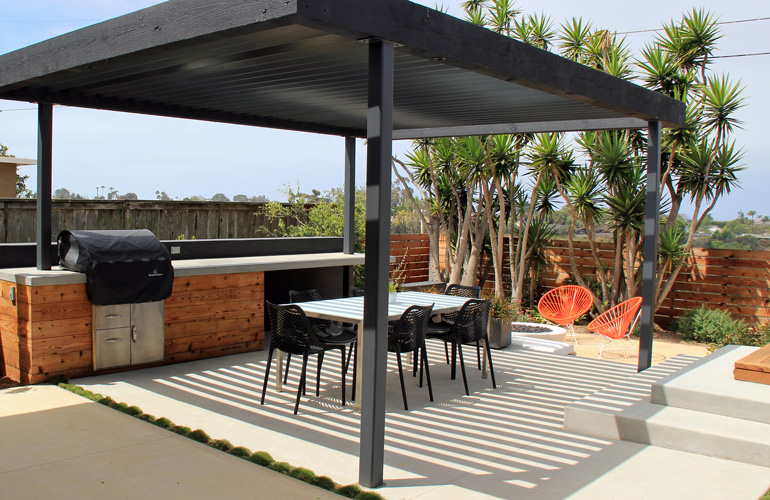 “We kept a stand of yucca in the corner near the fire pit because they were established and nice,” he says. “We just cleaned them up. The yard was good-enough sized that we could use some things that normally we wouldn’t use on a smaller residential lot because they’d get too big.”

Irrigation is on an automatic system and most of it is drip, with the lawn area on MP Rotator Sprinkler Stream Nozzles. The entire area is fenced with western red cedar set horizontally on galvanized steel posts painted black. 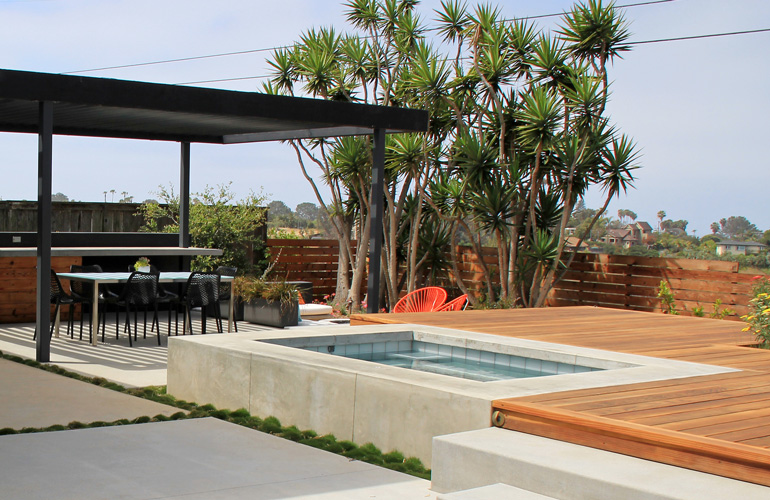 And, then there’s the matter of runoff. Prange says Encinitas has a lot of requirements on how water leaves a property, and property owners are required to capture runoff from any hardscape and roof areas.

“What we’ve done is a bmp (best management practice) where the water spills into an area that’s filled with varying grades of gravel and engineered soil,” he says. “The idea is that as it goes down in there it percolates and infiltrates back into the soil. And, if by some miracle the bmp would overflow, there’s an overflow drain that leads down to a city installed storm drain.” 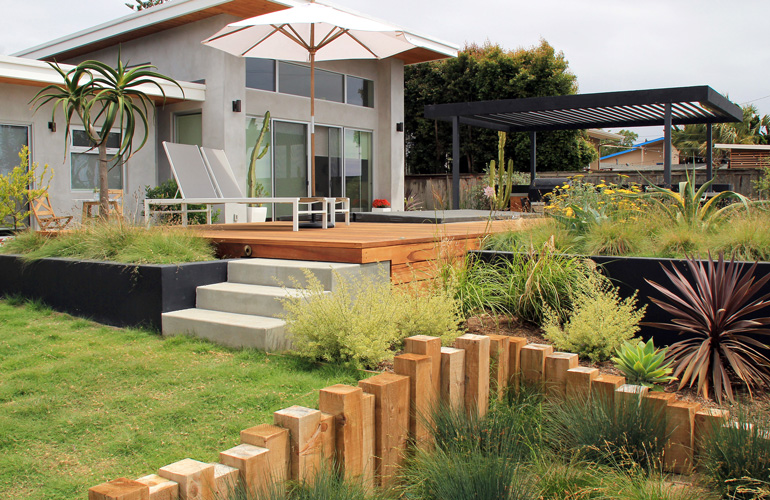 Prange adds it’s an approach that cities along the Pacific have been slow to adopt. In Encinitas, the system installed by Falling Waters has become something of a standard, which leaves the designer feeling particularly proud.

“We were told by the inspectors that it was one of the best they’d seen, and they’ve started taking pictures of it and showing it to other contractors as a standard,” he says. “It works, and now we do something like it on most of our jobs.

“This was a really fun project and we’re proud of it.” 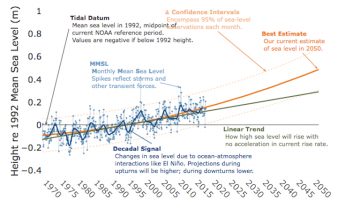