Story of a Landscape: Contractor Lassos Award with Western-Themed Landscape

Living the cowboy way is what one client requested for their property from Level One Landscaping Inc. in Scottsdale, Arizona.

There probably aren’t many adults who as children didn’t fantasize at one time or another about being cowboys. And, a lucky few can continue to bask in the mystique years later.

Of course, it helps to have an understanding landscape contractor. 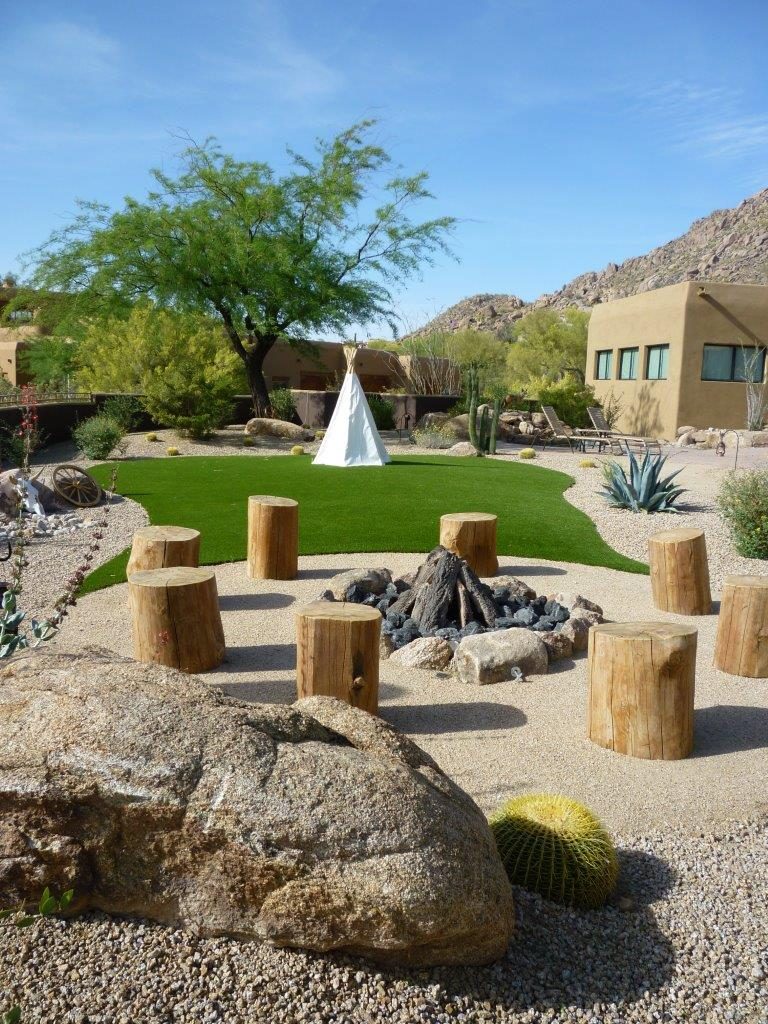 For the Robersons of North Scottsdale, Russ Lowd was just that design/build landscape specialist. The owner of the locally based Level One Landscaping Inc., Lowd was called in when the couple wanted to finish their backyard as part of a remodel of their seasonal home on a golf course.

“They were looking for a cowboy backyard — something in a cowboy theme,” Lowd explains. “The husband really likes the world of cowboys, and that was the starting point for me.”

Lowd, who works strictly by referrals from local architects, says for him the job was more of a boutique project than the six- and seven-figure installations his company more typically does. Still, he was able to incorporate several nice features that work with Scottsdale’s water restrictions and a fairly modest budget.

“We actually took a flat backyard and then did some minor contouring,” he says. “We wanted to keep it more in the desert world.”

Central to the project is 2,500 square feet of Belgard concrete pavers, which provide the base for an outdoor living space that includes a bar area.

Another 600 square feet of synthetic turf provides some green space and offers a play area for the Robersons’ grandchildren.

“There’s also a miniature teepee for the grandkids,” Lowd notes. 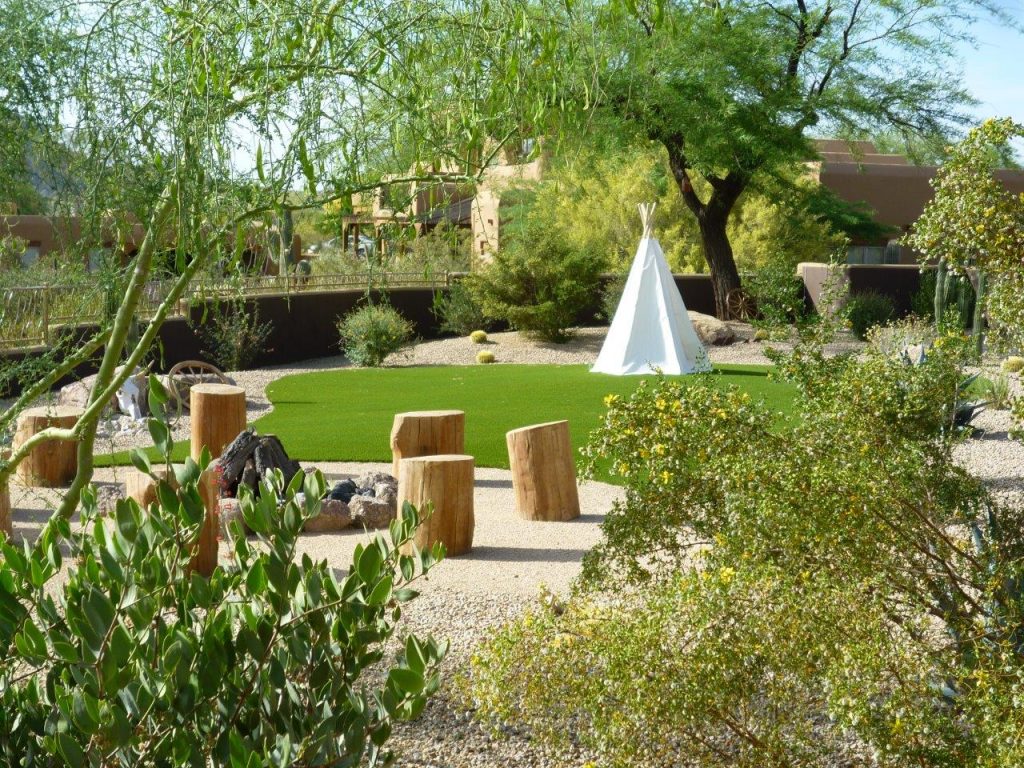 The remainder of the project, approximately 4,000 square feet, is done in what Lowd refers to as “desert area” and includes plants and stabilized granite pathways.

In that respect, the project is fairly typical of other Level One projects. Lowd says none of the last five projects his company has completed has included natural turf. At the same time, use of the quarter-minus rock material and drip irrigation are quite standard. 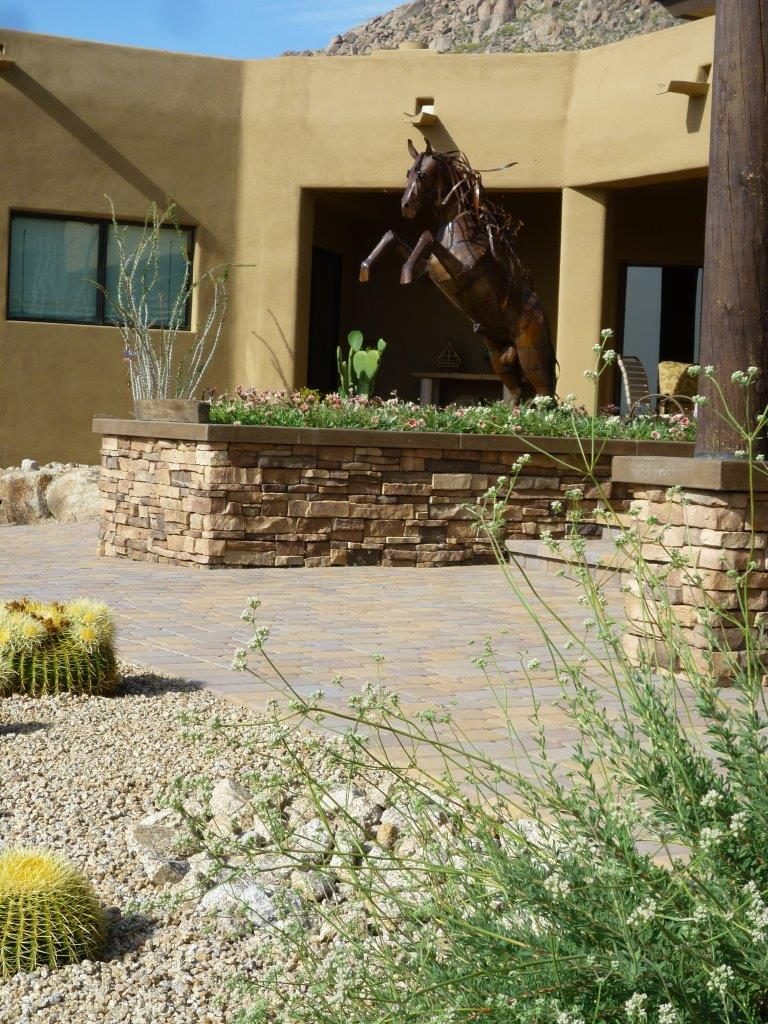 Other atypical — and cowboy related — touches include a natural-gas-fired fire pit surrounded by tree stumps for seating, and sculptures of a stallion on the patio area and a coyote overlooking the small water feature.

One amenity of which Lowd is particularly proud is the lighting.

“One of the things that makes it special is the lanterns, which we ordered from a company in California,” he says. “You can order then as low-voltage lighting, which we did. We then welded shepherd’s hooks and hung the lanterns from them to continue the cowboy theme.” 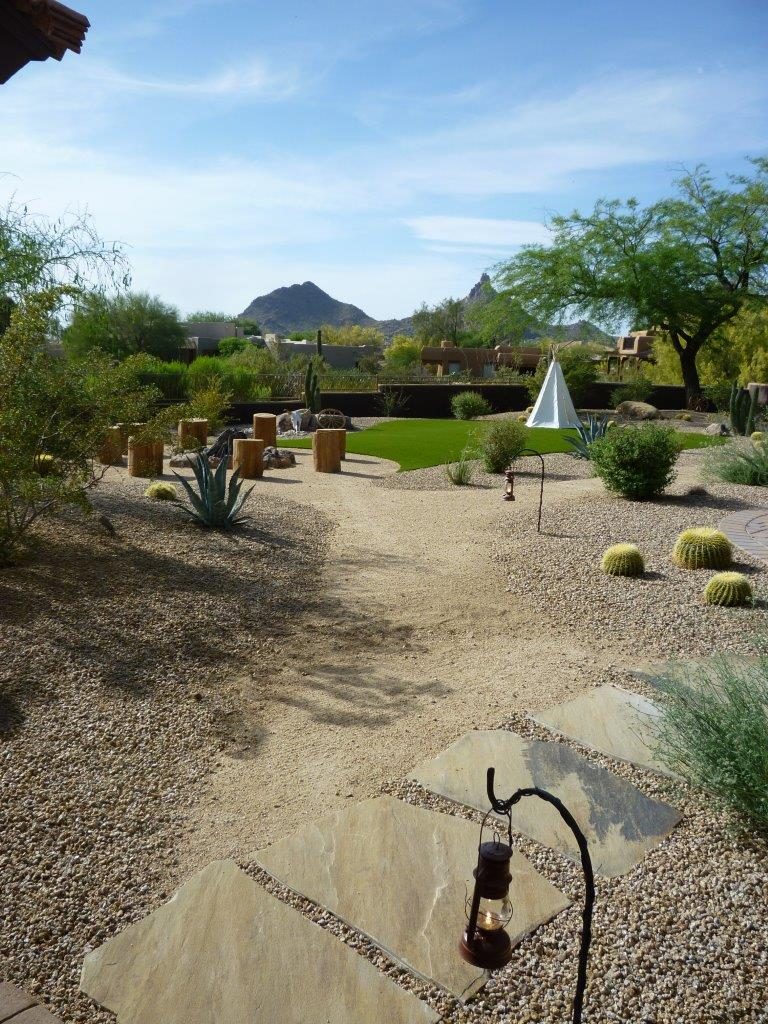 Lowd’s plant palette is also easily recognized by anyone who’s a fan of old Westerns. He says his general preference with almost every project he does is to utilize the plants common to the Sonoran Desert.

“One, they do well here,” he says. “Two, you can still be rather creative with them, and three, I think most of the homeowners we have here — even part time owners who come for the winter — really enjoy the Sonoran Desert because it can be quite lush.”

The way that palette ties in with the home’s general area is one of the things of which Lowd is most-proud about this job. And, of course, the project’s ability to give the client the cowboy-themed space he wanted. 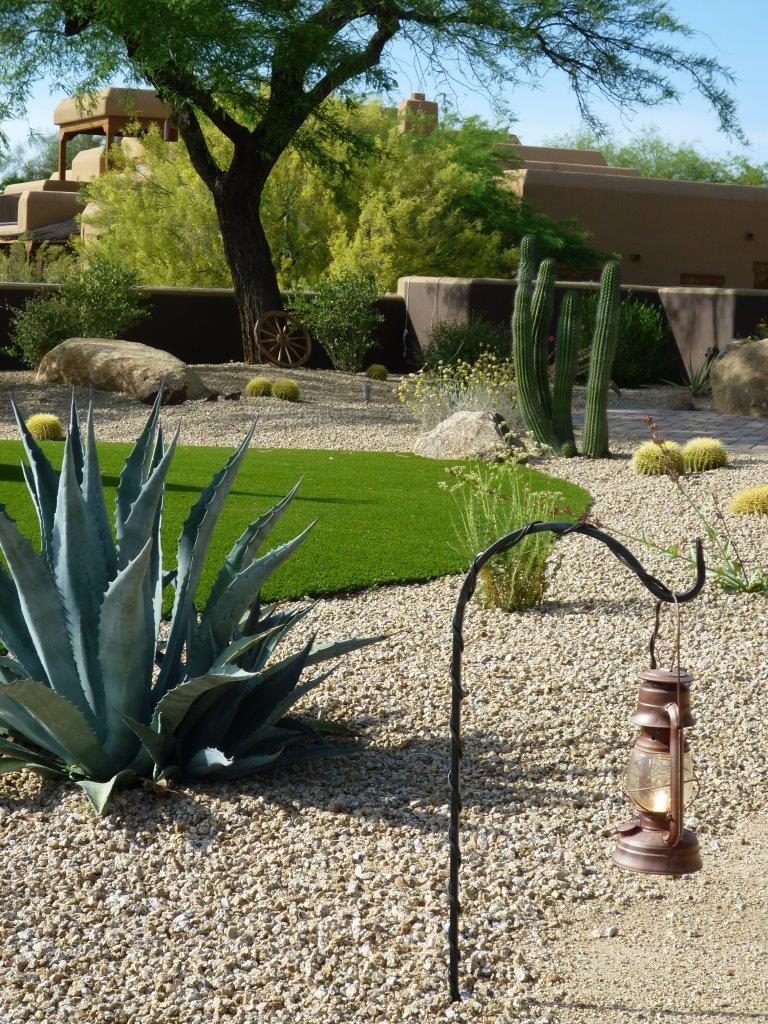 “What makes me smile about this job is the fact that it’s a really good design and you can see all the parts of it and how they work together,” Lowd says. “It has the right flow, both within the theme we were working with and within the budget we had.”

Naturally, he’s also proud that the job won a judges’ award in the category of Residential Installations from $50,000-$75,000 from the Arizona Landscape Contractors’ Association in 2014. In fact, Lowd says the recognition of his peers means more to him than any national awards.

“My friends are also owners of landscape companies,” he observes. “What makes this for me is a pat on the back, because you don’t get many in life, so it’s nice to get a few.” 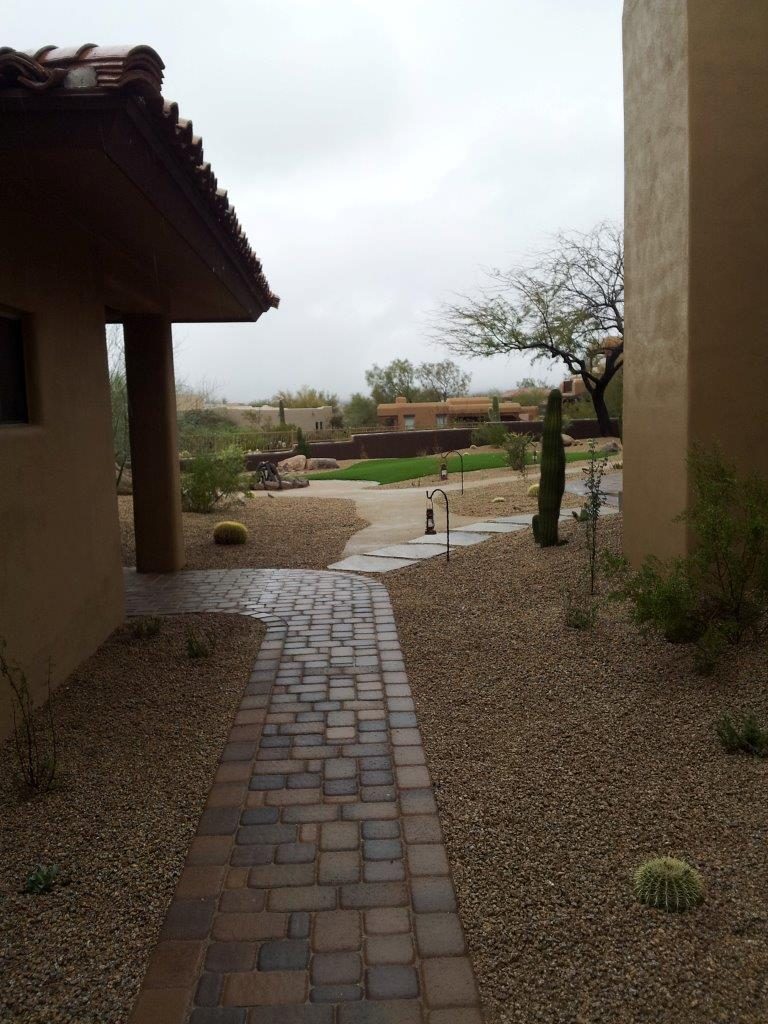 In the end, it proved to be a rewarding experience on both sides.

“I think this job really showed me the importance of the integration between the contractor and the homeowners, and even though there was some tumult as they changed general contractors, they absolutely loved the outcome of their landscape.” 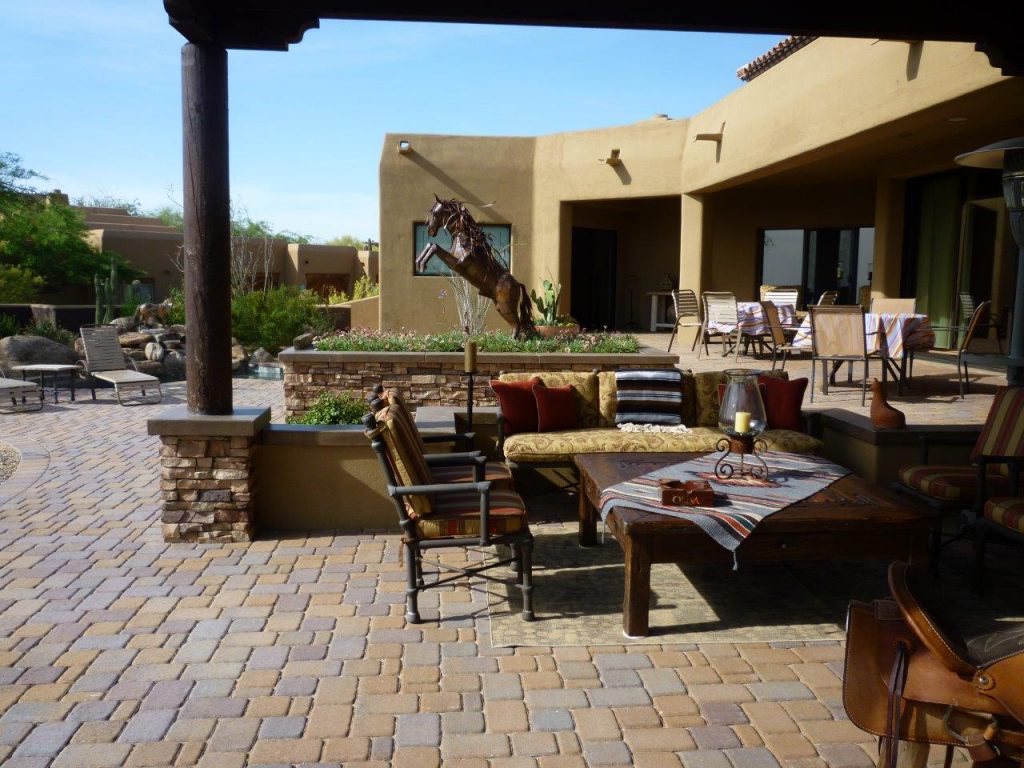 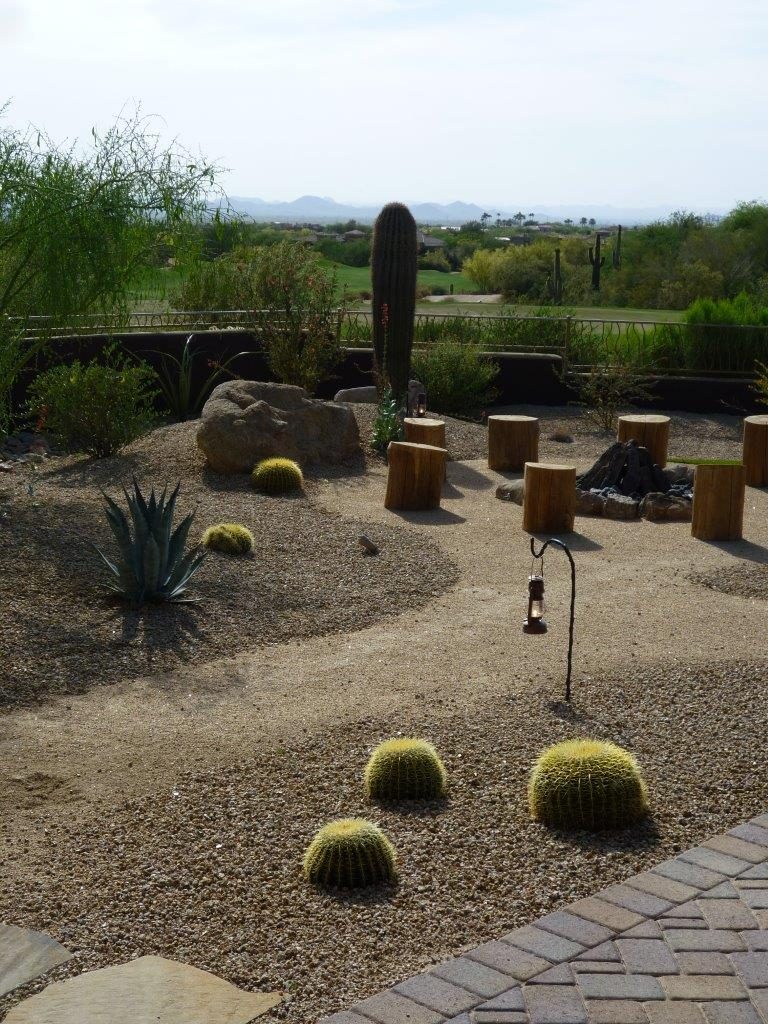 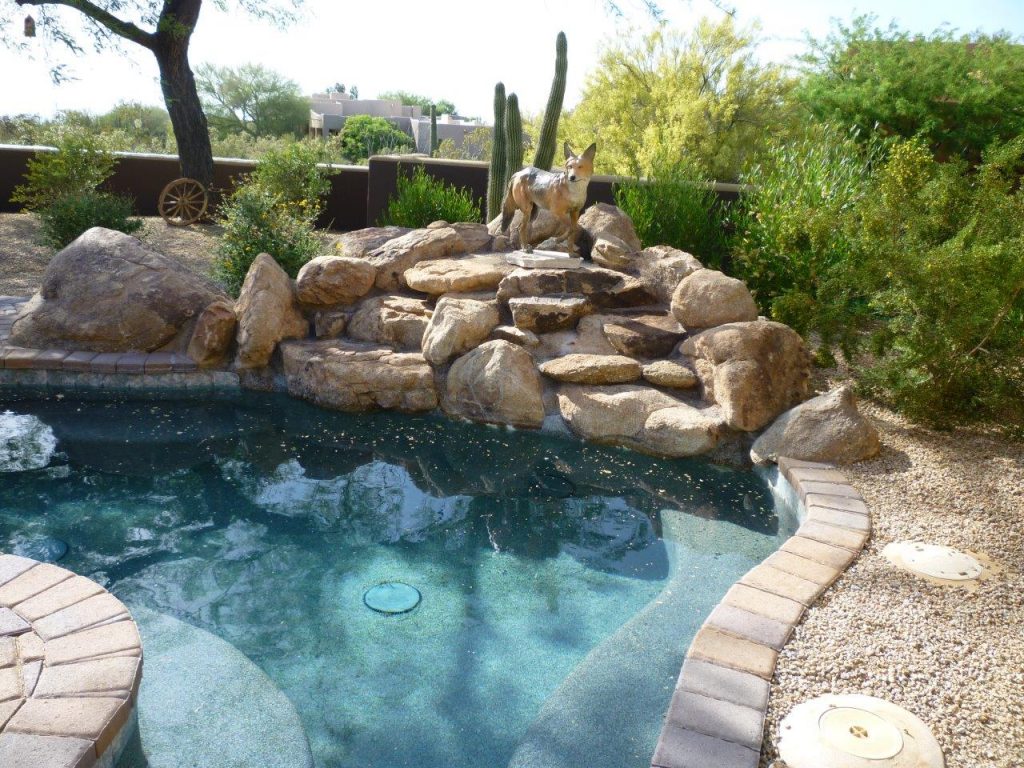 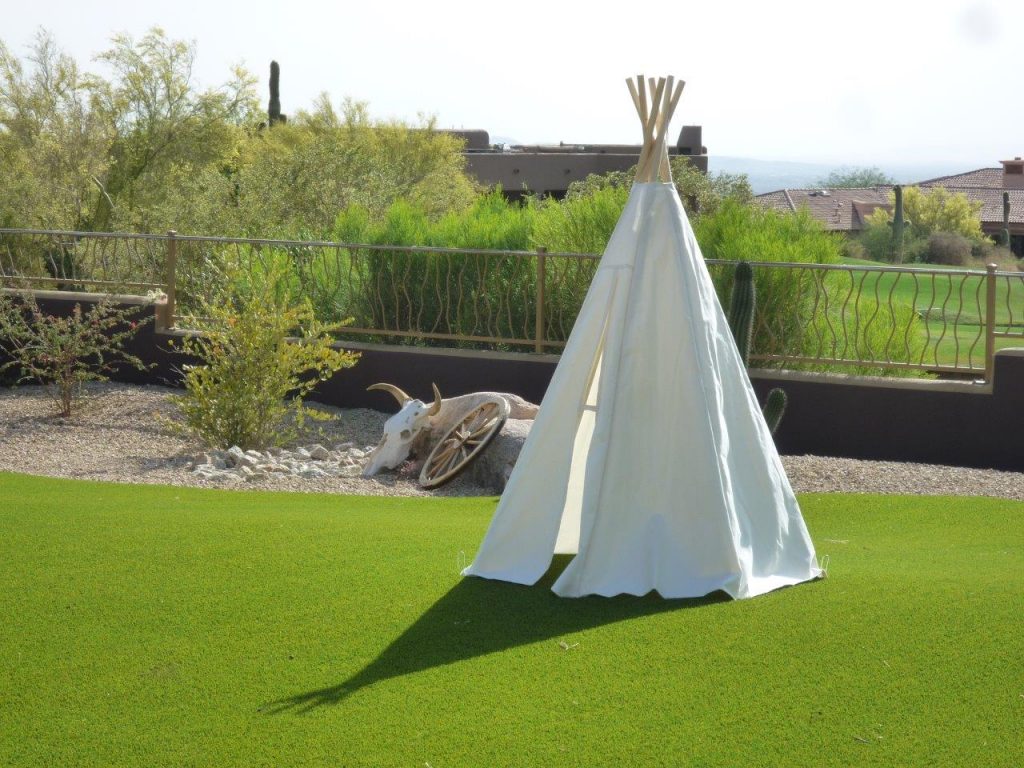 Previous post 38 Percent of Homeowners Looking for a Landscaper